(View User Tanks)
PTrader: (4/100%)
Join Date: May 2015
Location: Phoenix Arizona
Posts: 975
15 Gallon future shrimp tank
So Ive had this aquarium setup for about two years as a low tech setup and I just got done planting it as a high tech dirted. 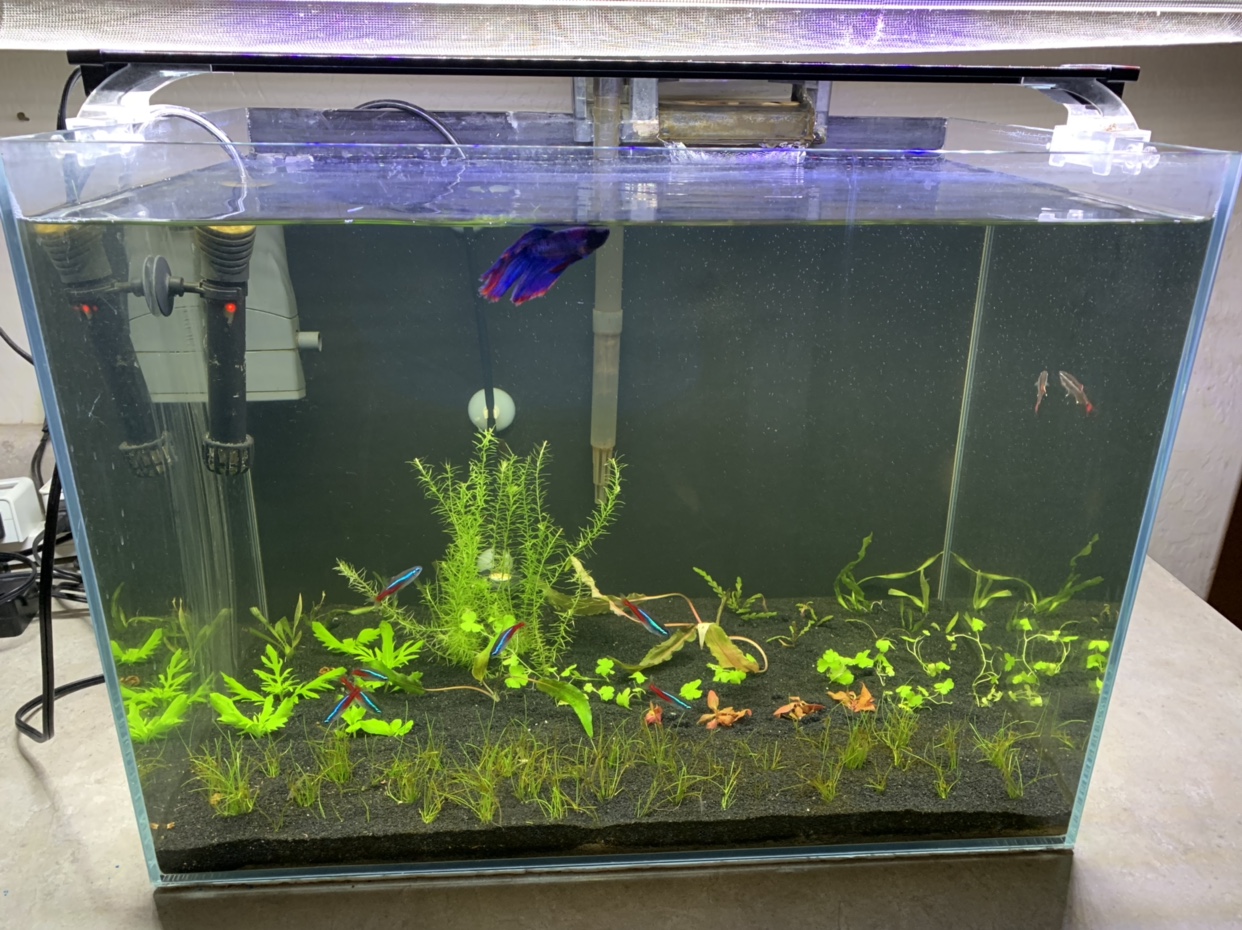 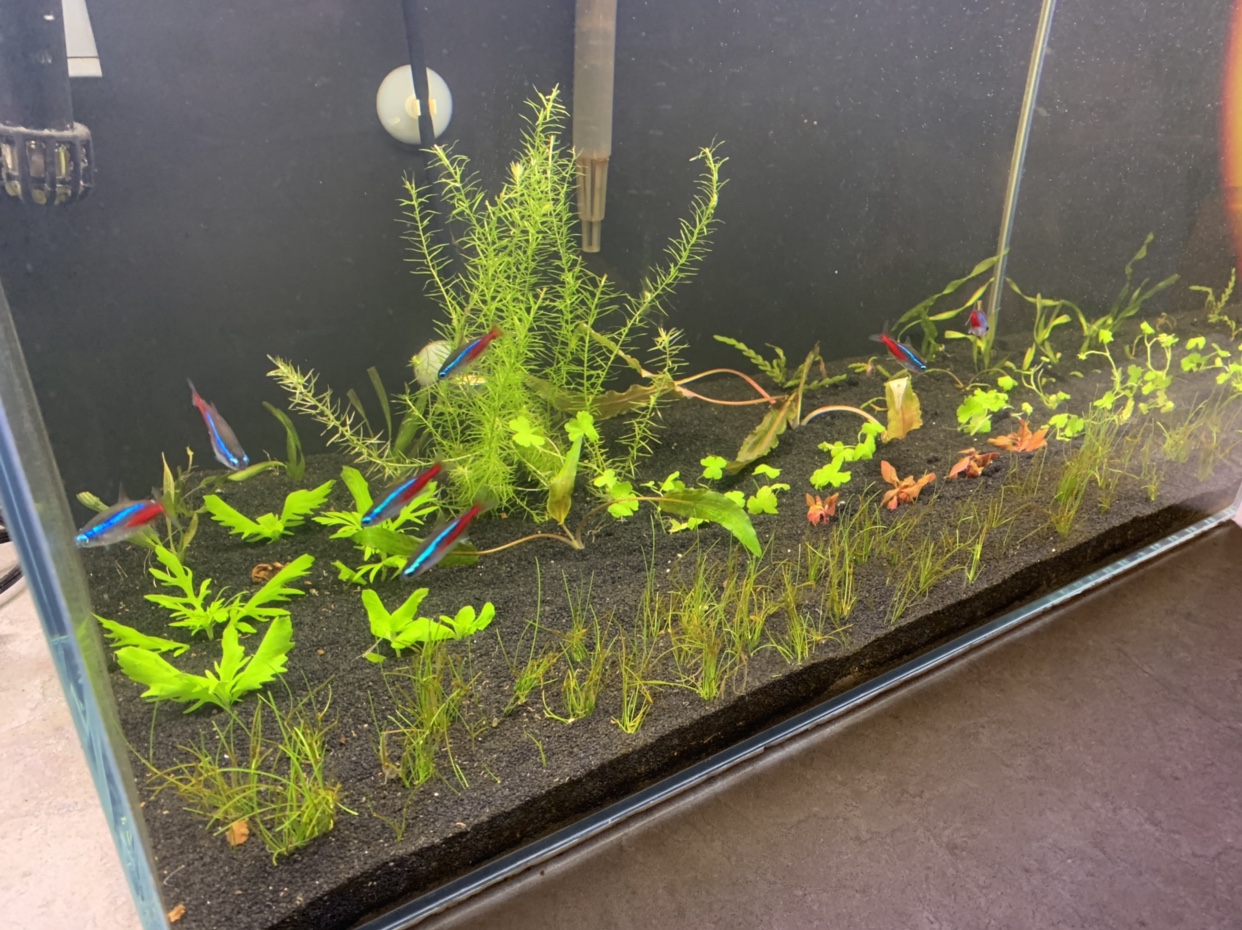 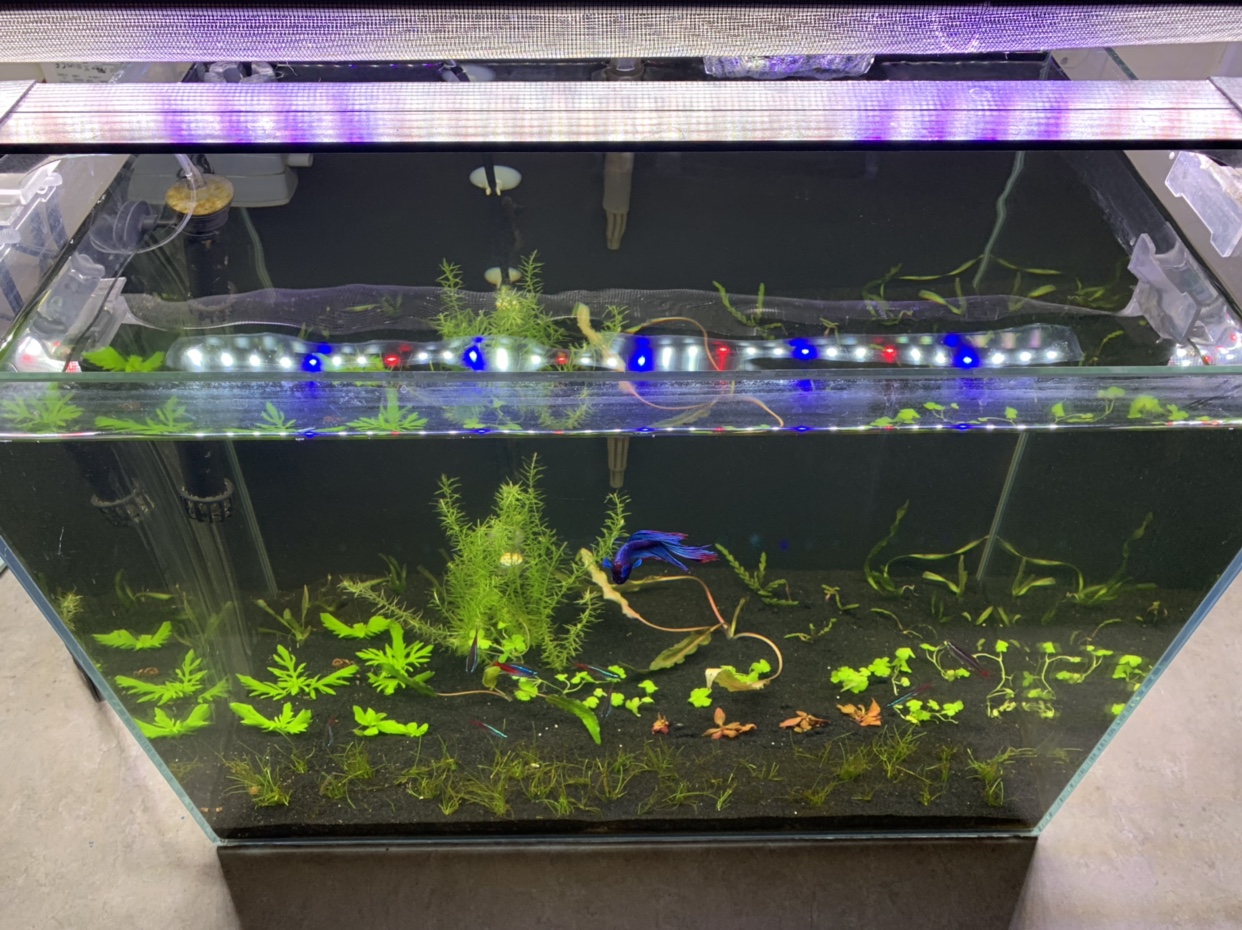 The tank is a low iron Aqua Japan.

Lighting is a 20 Finnex Stingray and a 30 Finnex Planted+ (a left over from my older 20 long). If memory serves the Stingray provides about 35-40 par and the Planted+ about 60 par at these distances.

Filtration is a Aquaclear 50 and a Eheim surface skimmer.

Co2 is provided by ceramic diffuser hooked up to a Aquatech co2 regulator mini. Ive had the regulator for about 4 years and its great. Annoying how the adjustments work. Micro adjustments or else youve just added or reduced 10 bps. But no end of tank dumps and it holds the setting well.

The tank is dirted. I started with some nobrand organic potting soil and sifted it. And sifted. And sifted some more. One large bag turned into 1/3 of the bag usable after sifting. I thought that was pretty crazy but whatevs. I then mineralized it for about a month by laying it out on a tarp and getting it completely saturated with tap water and spread it out thin for it to dry as quickly as possible. Took 2-3 days each time to dry it out and then mix it and repeat. Did it about ten times total. The dirt went from brown soft smelly to grey sandy with pretty much no smell at all and thats when I added it to the tank. I got the dirt nice and thick soupy like oatmeal and added it to the tank and capped it with some generic black sand. I then floated some hygrofila difformis to suck up excess nutrients for about the last three weeks and did large water changes twice a week until there were no more tannins.

Then I planted. I started with eleocharis parvula in the front of the tank on December 20th and then thanks to a killer raok on December 27th I planted:
Valisnaria Spiralis
Crypt Lutea (I think)
Limnophila aromatica
Rotala Pinnatifida
Alternanthera Reineckii Mini
Hydrocotyle Tripartia
And I planted the new growth from the Hygrofila Difformis.

Im dosing with essentially ei levels but Ill fill out a spreadsheet soon and add it.

This is on January 2nd

Everything else is showing new growth and hydrocotile is pearling nicely

And here is from todays water change. Gave the hairgrass its first haircut and trimmed some of the L.A. and replanted.
Before 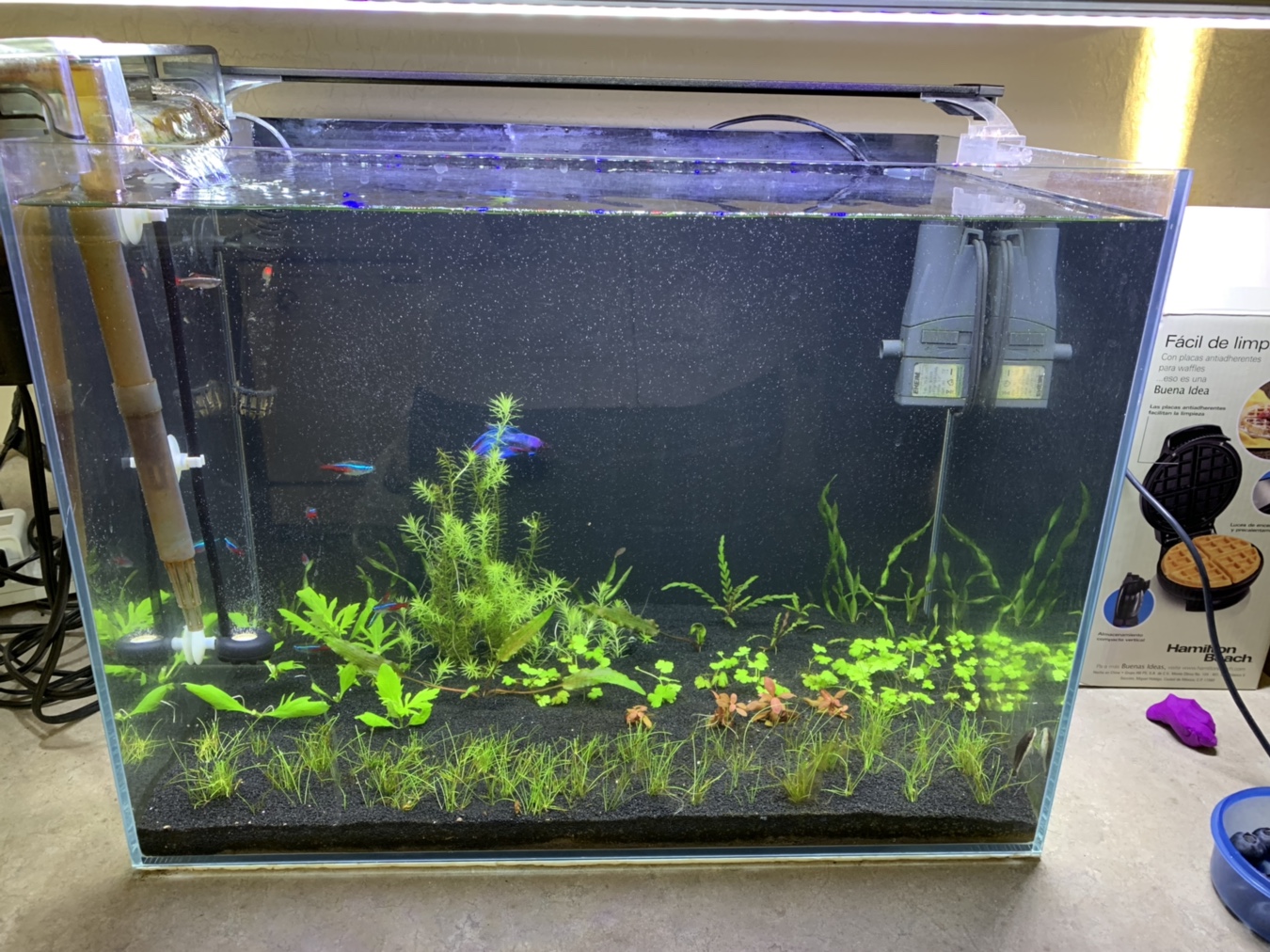 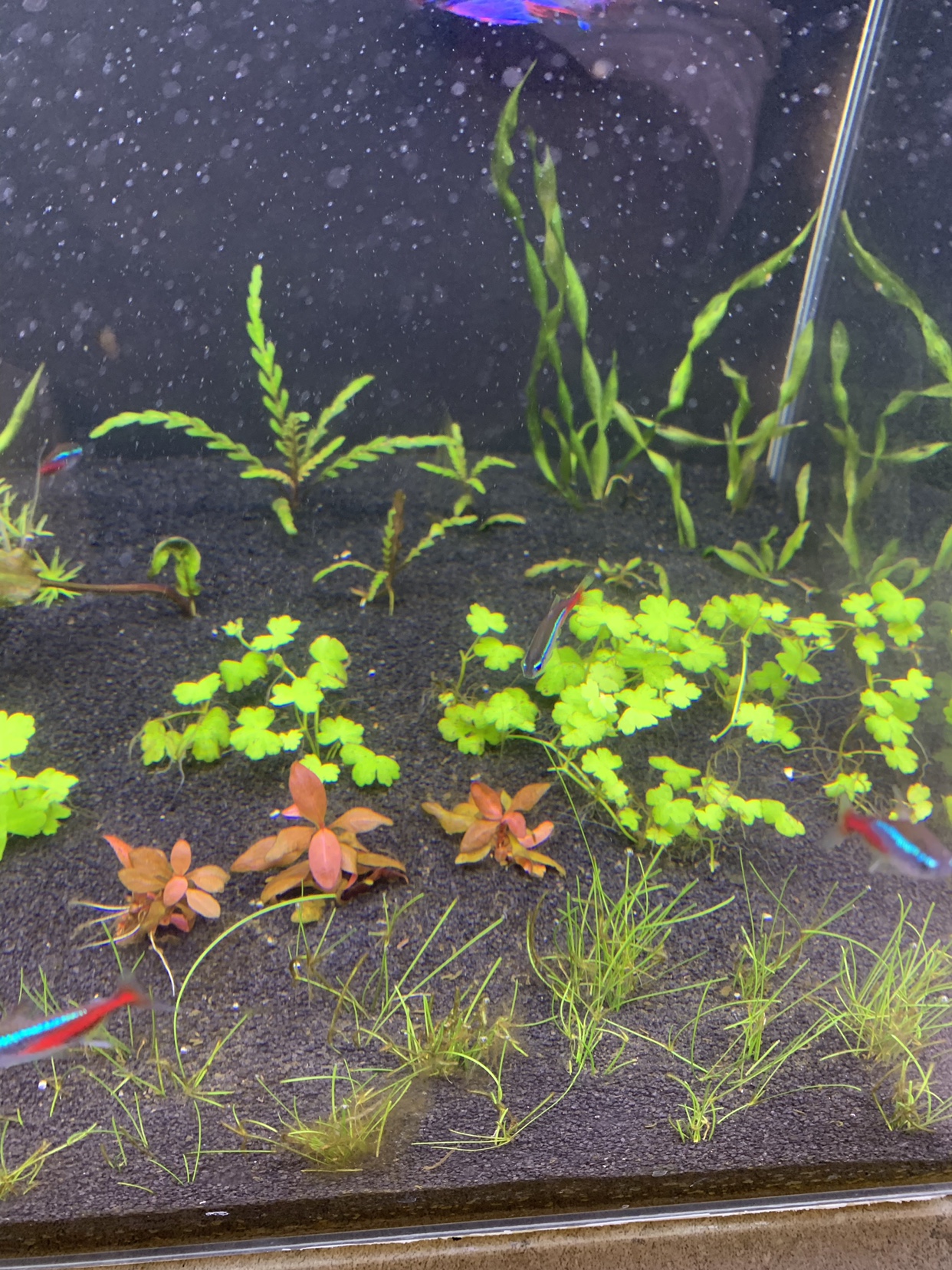 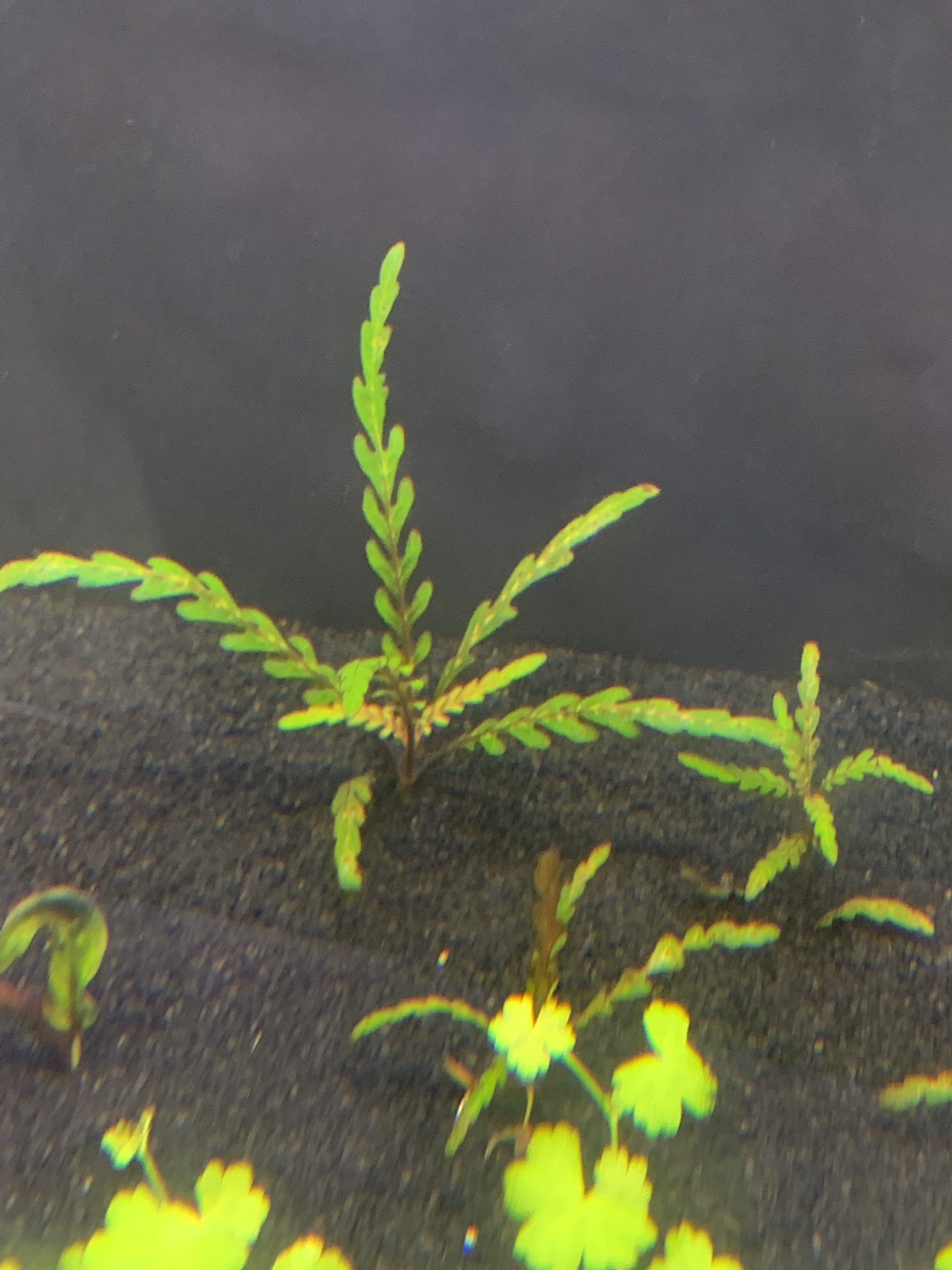 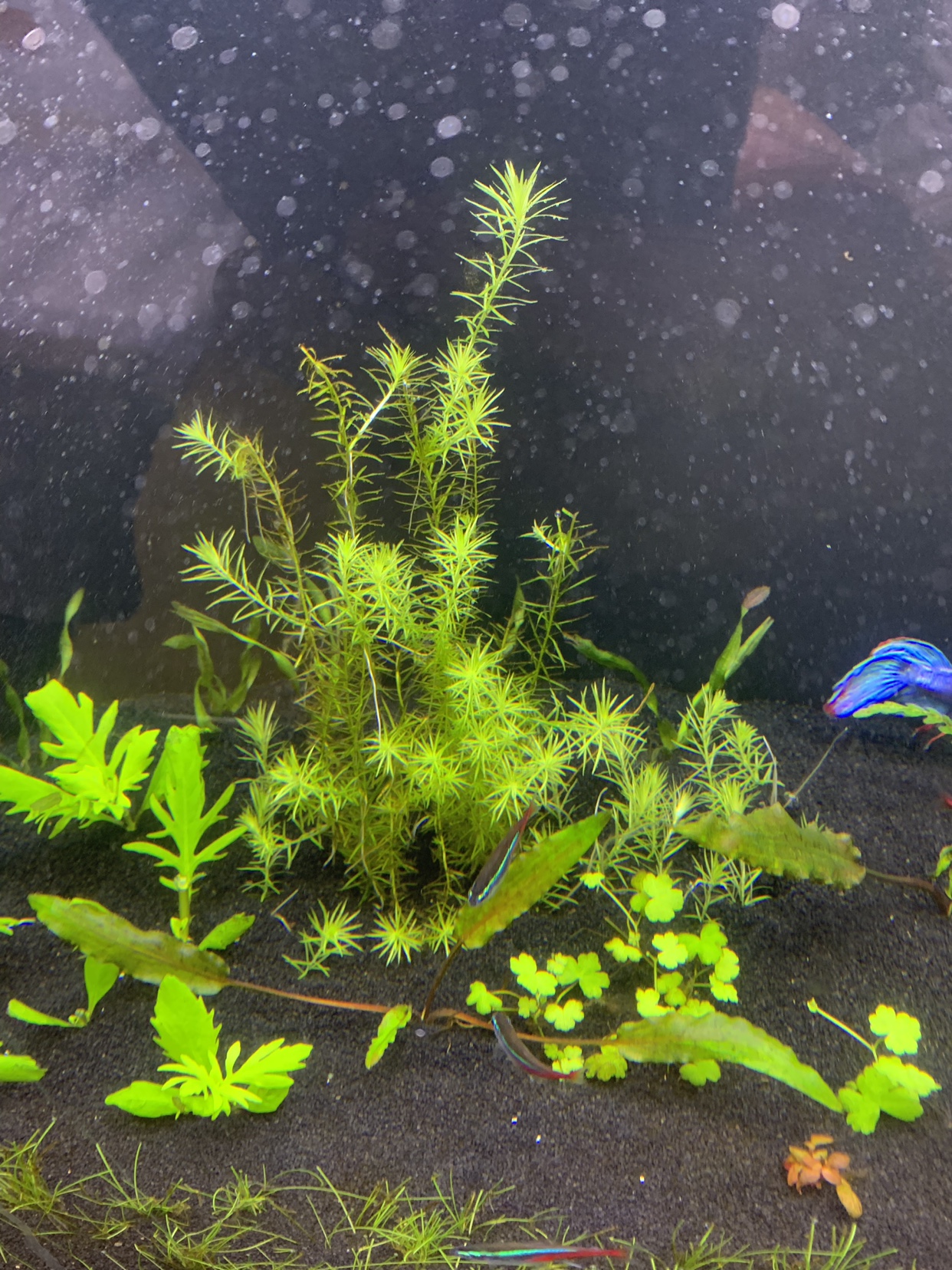 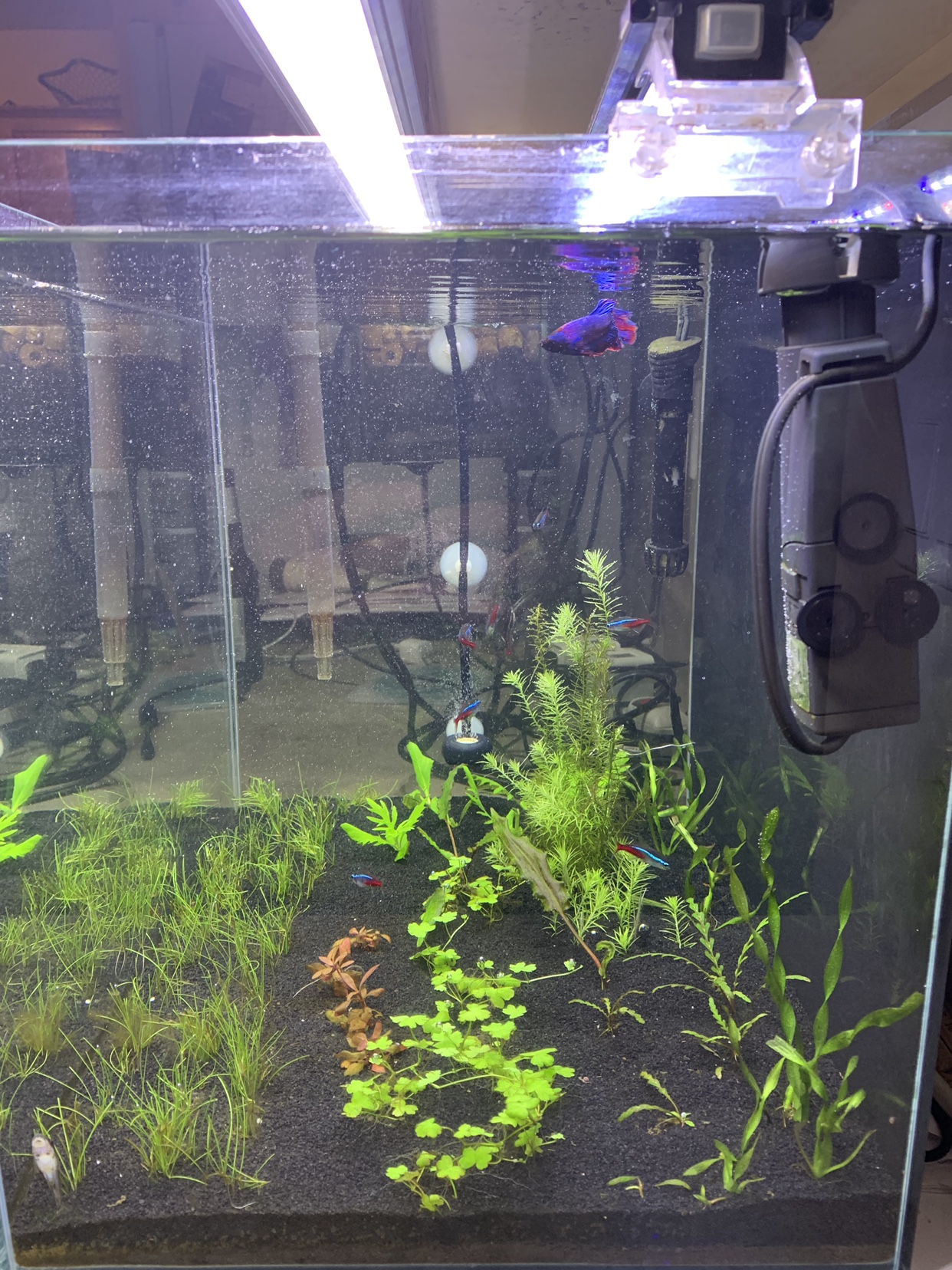 Im calling it a future shrimp tank because right now Im trying to get things nicely growing and once it is to see what the water parameters will be for which type of shrimp. So far after ei dosing and feeding the existing fish four times a week Im seeing a tds increase of 65-70 followed by a 70% water change weekly. Im figuring if I can start the week around 80-100 I could start breeding some nice Taiwan Bees which is what I really want. We shall see as things fill in more and nutrients are dialed in more.
Last edited by Willcooper; 01-14-2019 at 04:37 AM.
Willcooper is offline
Quote Quick Reply
post #2 of 13 (permalink) Old 01-12-2019, 05:06 PM Thread Starter
Willcooper
Planted Tank Enthusiast

(View User Tanks)
PTrader: (4/100%)
Join Date: May 2015
Location: Phoenix Arizona
Posts: 975
Everything is growing really well but upon further reading on micros and the ability for Chelated irons to be usable I realized I bought a micro mix I shouldnt have. Im using millers microplex and adding dtpa 11% iron to the solution thinking the plants would able to use both irons as the ph dropped from the co2. My gassed co2 is 6.0 but my degassed is 7.2 and after reading that edta iron looses the chelation above 6.0 and looses a lot more the higher ph you go the edta is essentially doing nothing because my ph right before the gas comes on is at about 7. So looks like Ill be buying custom micros to role my own soon.

My current mix is a .17 daily dose of iron with .07 coming from millers and .1 coming from dtpa 11%. It seems fine now but when more plant mass is there and the need for more usable iron is needed I fear I would run into an issue. Its possible the dirt will make me not notice anything for a while but when those nutrients run out I foresee issues. 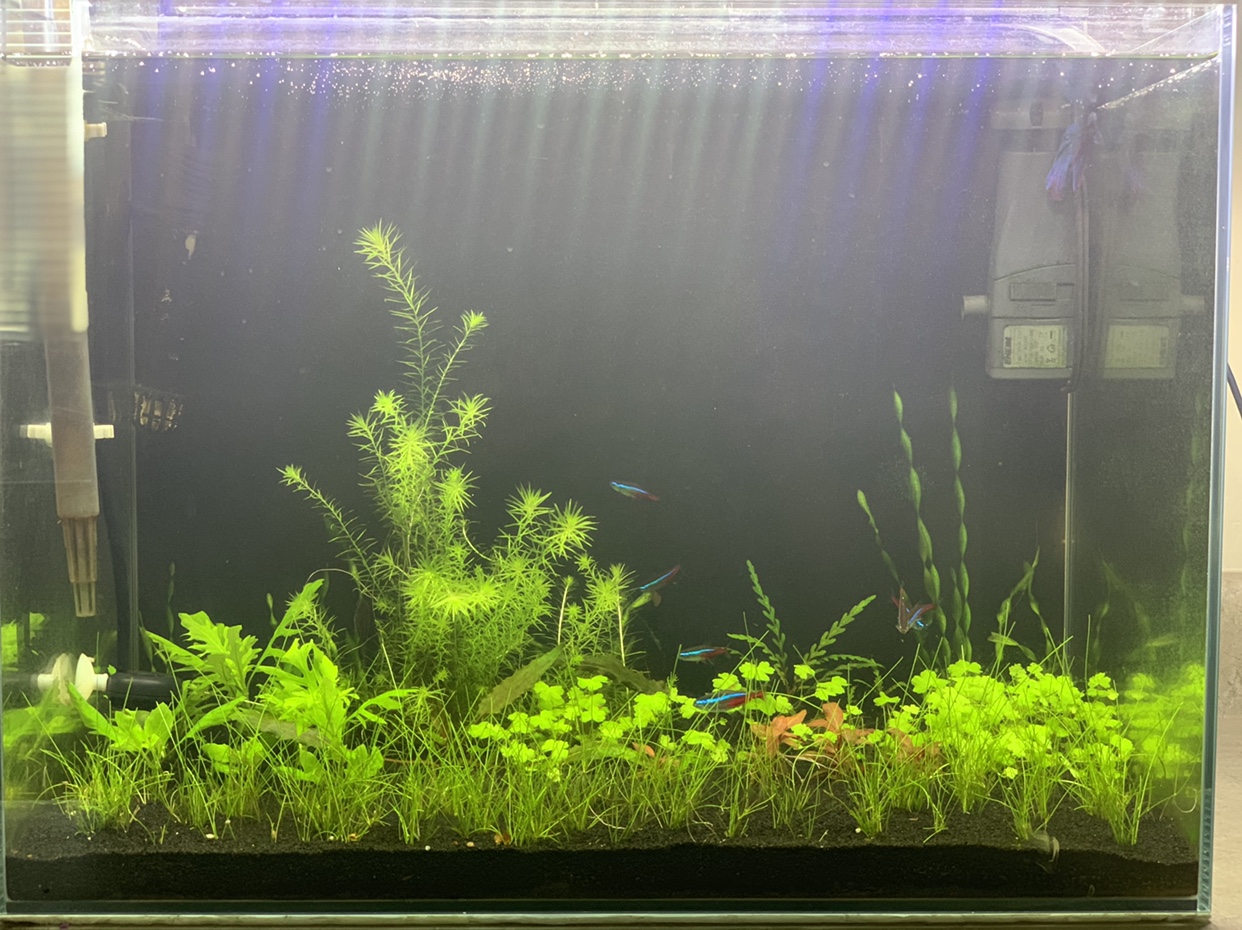 Hairgrass grew back pretty tall in just a week as well as the L.Aromatica. Cut the grass and trimmed the L.Aromatica and replanted. Took a couple of wisterias out to make room for the L.Aromatica clippings. The H.Tripartia had to have its runners cut back. I want to let it bush up a little but to stay in a group instead of spreading. I imagine both the crypts will be coming out soon and Ill move the H.Tripartia in between the hairgrass and L.A.

I want to start getting some plants together for the 75 Im building and Ill use this tank to get them acclimated and practice making sure I can grow them to their fullest.

Here is after todays trim and water change. 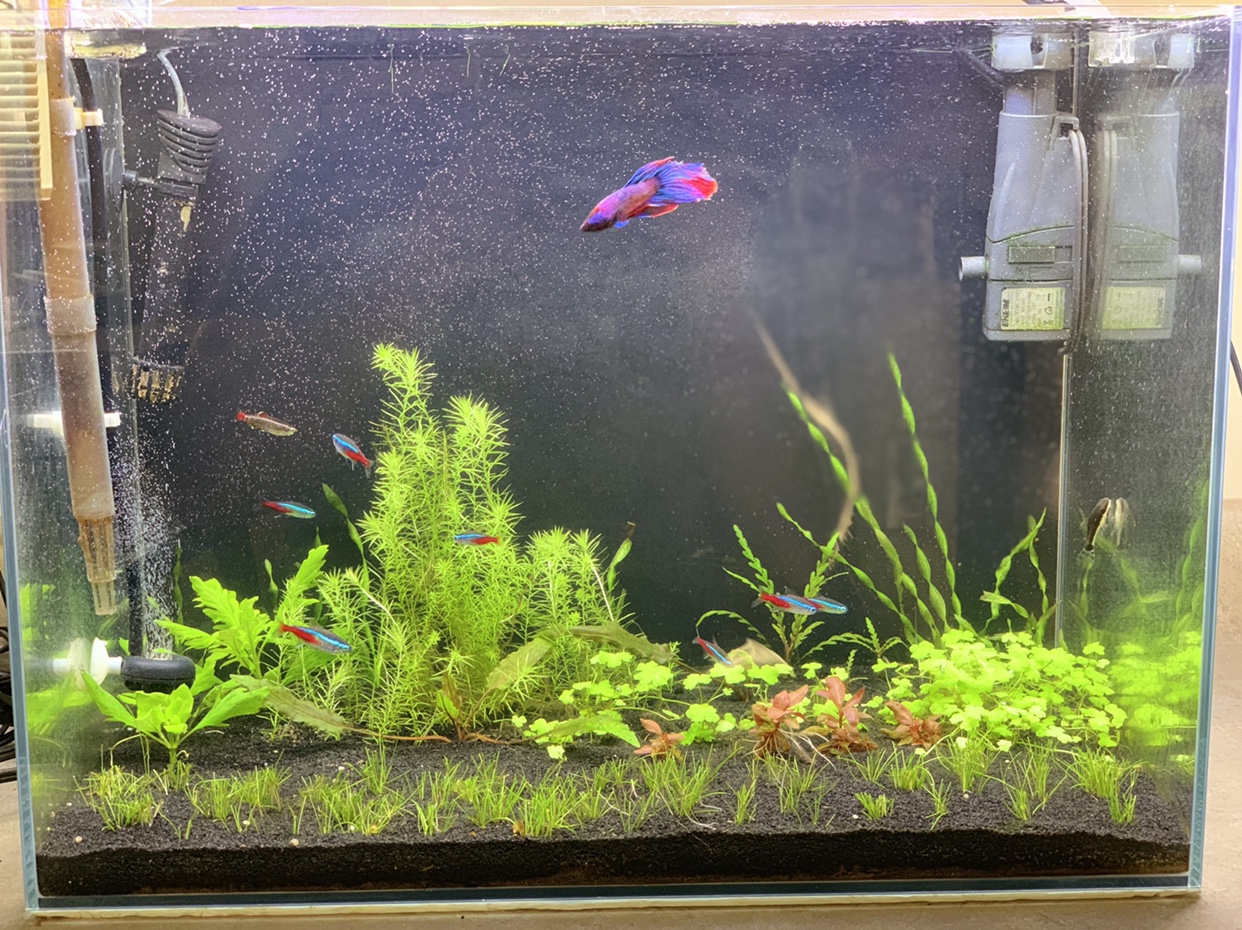 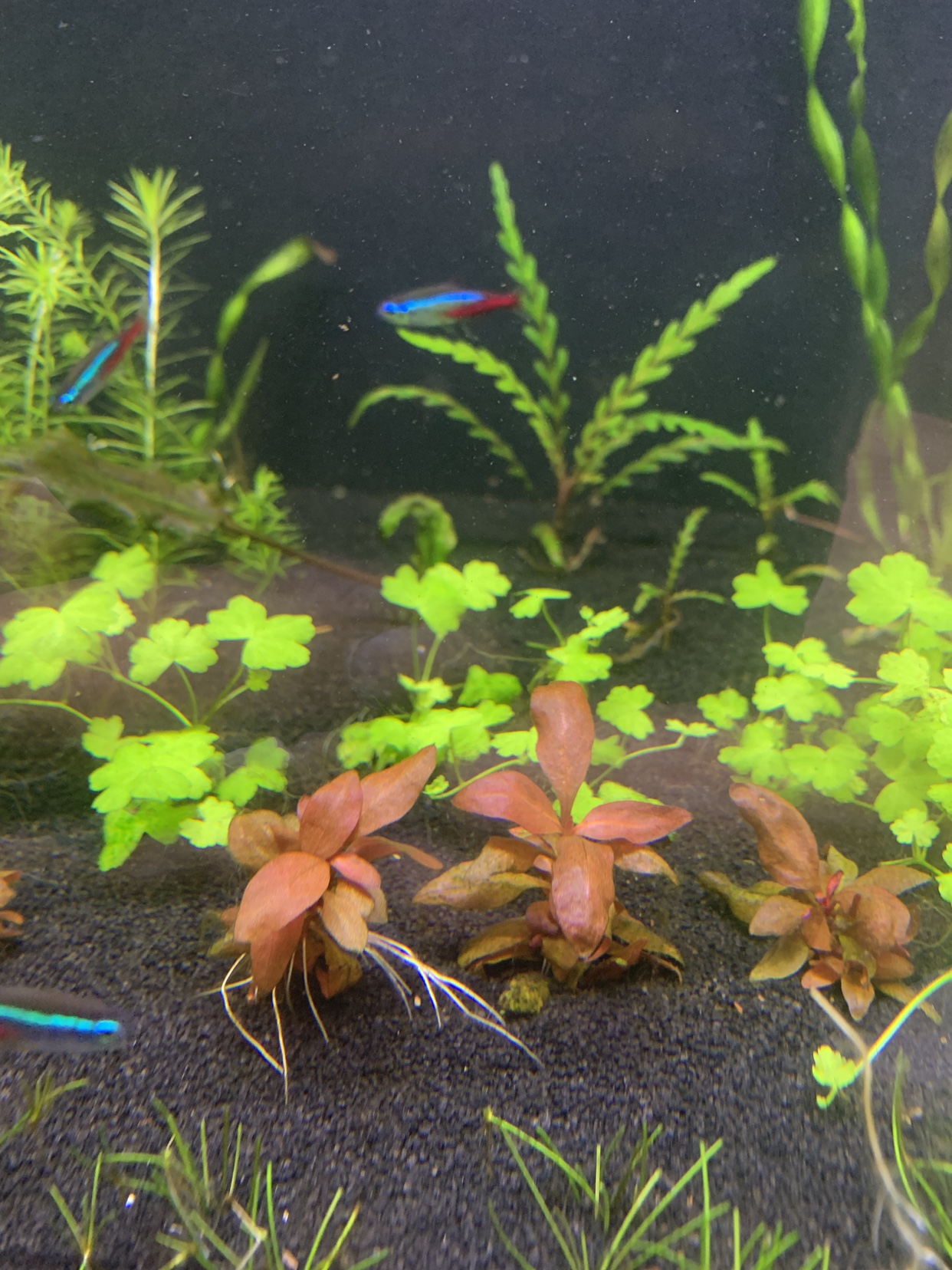 Im loving the color on the AR and the H.Pinatifida is doing very well and the small former runners are showing some growth as well but not as fast as the large one. 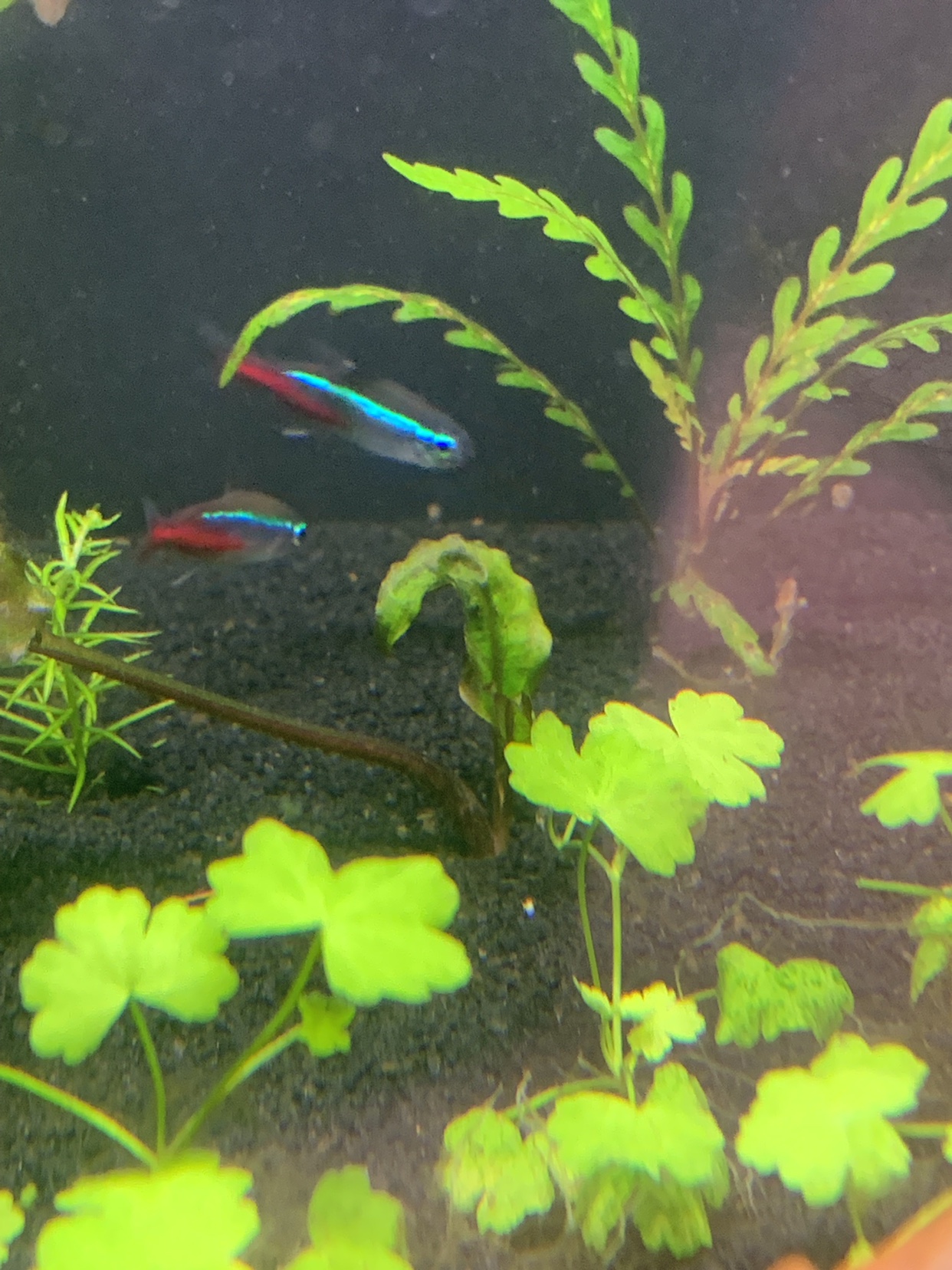 little bit of stunting on this crypt. Weird considering the other one is doing so well. 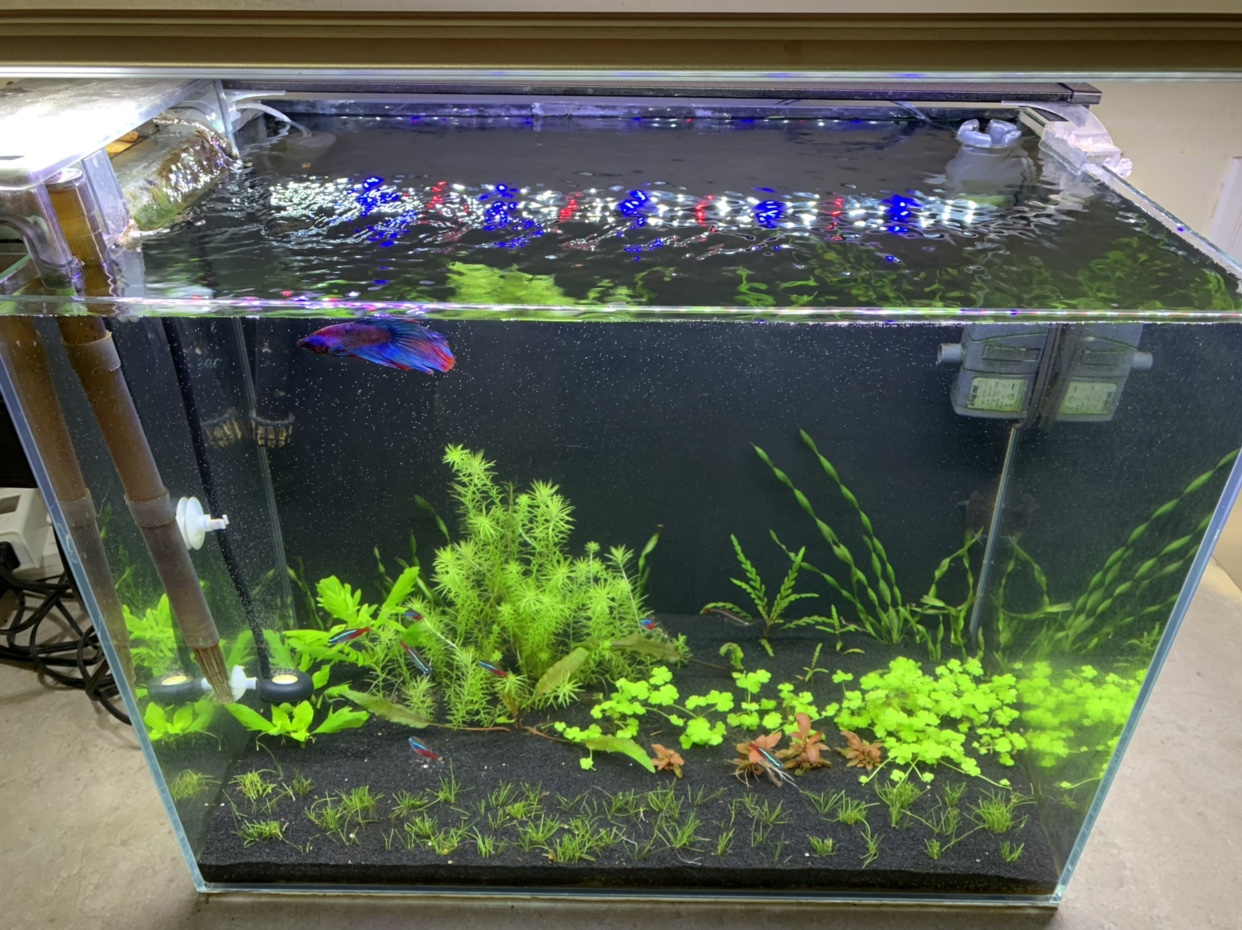 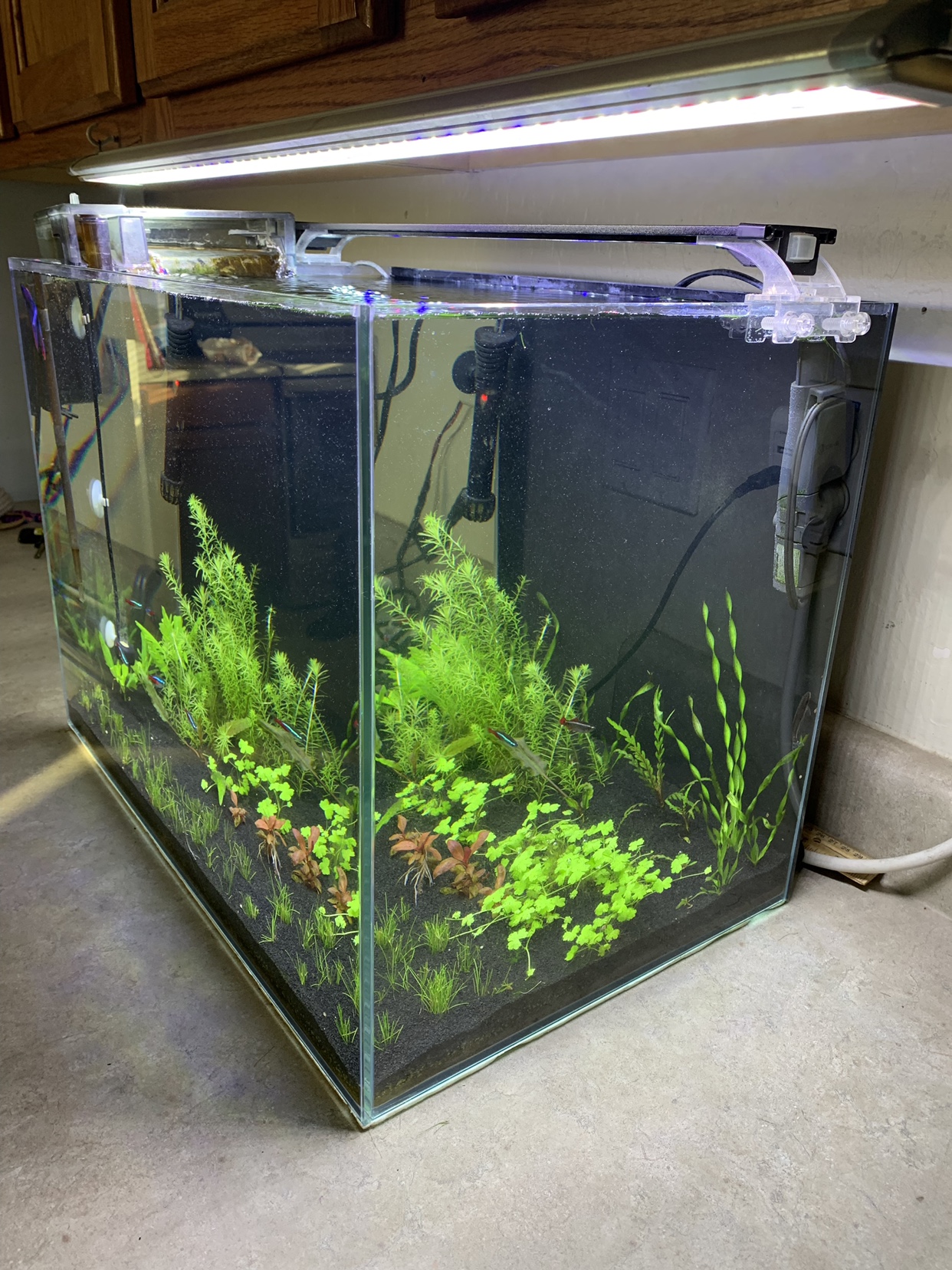 my usual vantage points as it sits on my counter. 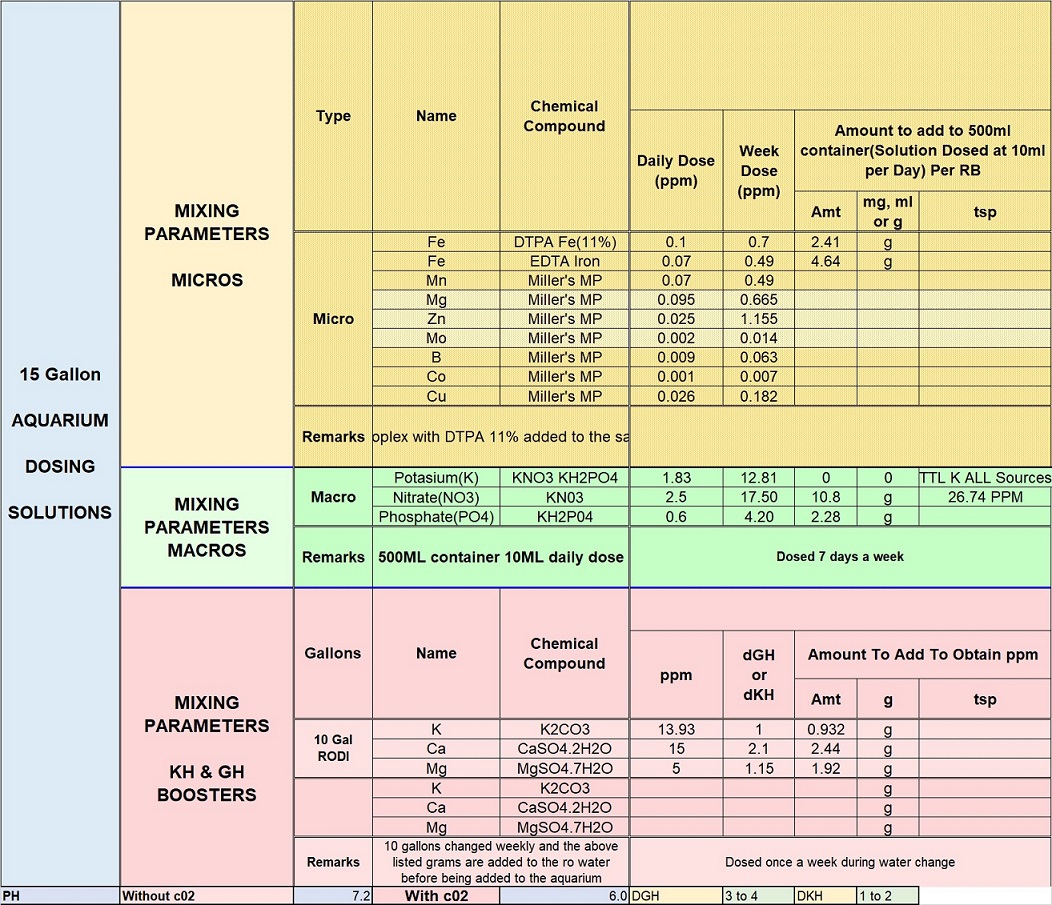 I imagine Ill be increasing macros with my next batch as more plant mass forms. The tank went through diatoms already but I am getting a little string algae from the old growth from when I got the plants. Only seems to be on the old dying growth which should be all removed by the next water change. I am also getting a little green dust algae on one side of the glass but not much. Could just still be apart of the cycling that happened or from co2/ferts not being dialed yet.

(View User Tanks)
PTrader: (4/100%)
Join Date: May 2015
Location: Phoenix Arizona
Posts: 975
Well this week was algae week. Had a pretty decent explosion of green hair algae growing on one wall and what looked like thread, staghorn and a little bba on various older growth from being planted originally as well as some growing in the hairgrass. I went through with a tooth brush swirling it out of the grass and and pulled out most of it from anywhere else. I had increased co2 earlier in the week to about 5.85 ph so a total of a 1.35 ph drop now. I removed the stingray and will just use the planted+. We shall see in a week or so if that was the culprit. 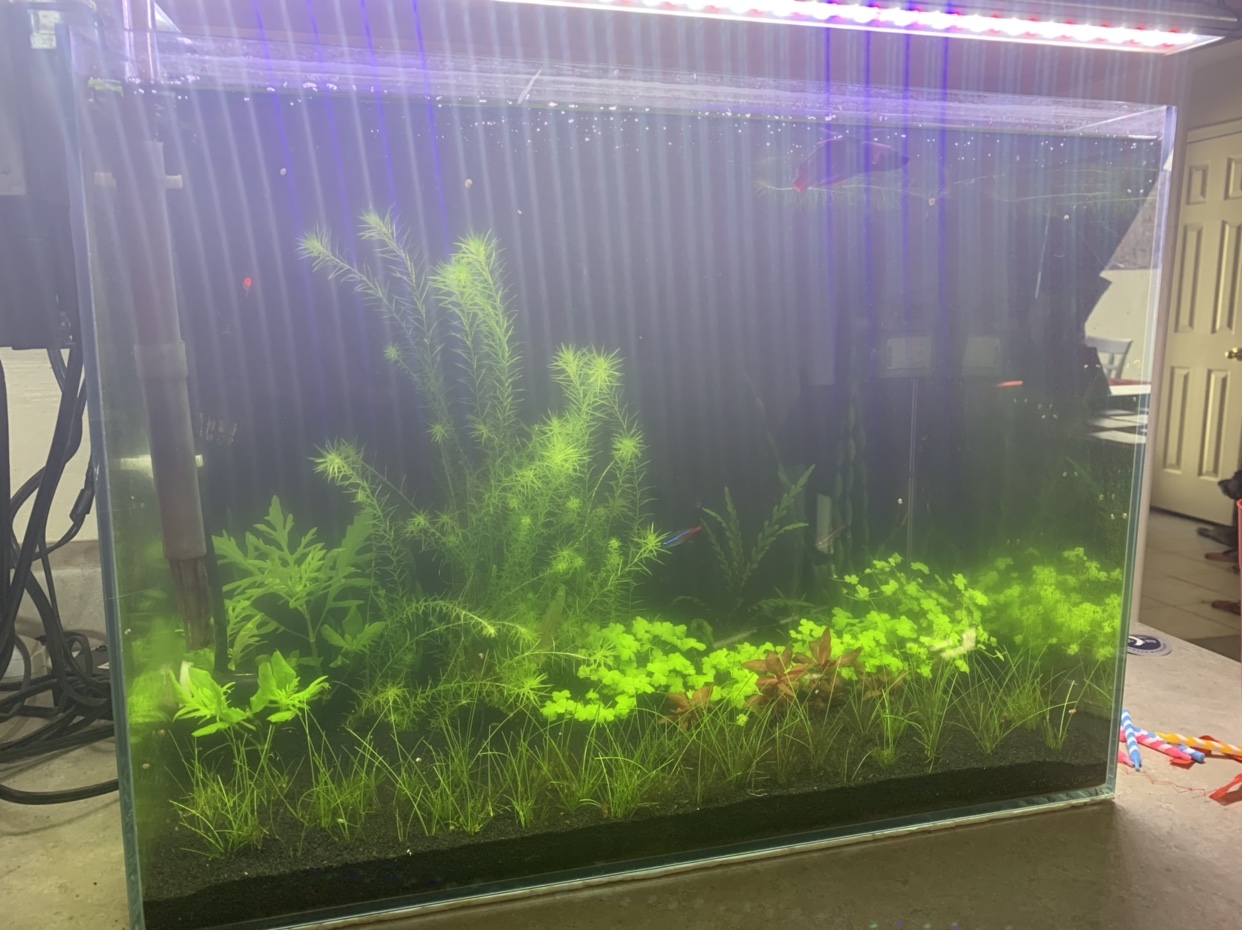 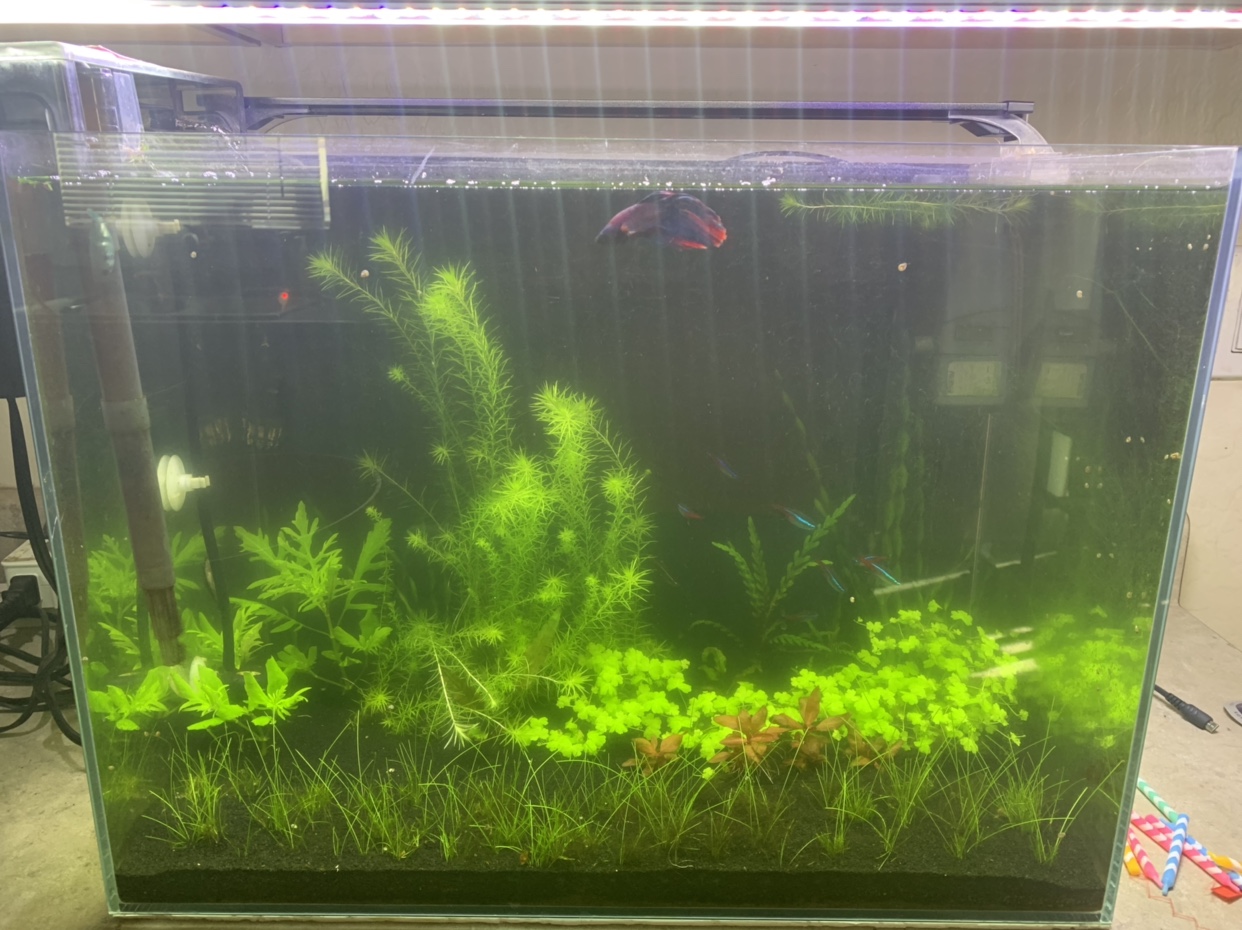 Heres after the water change and some trimming and replanting. 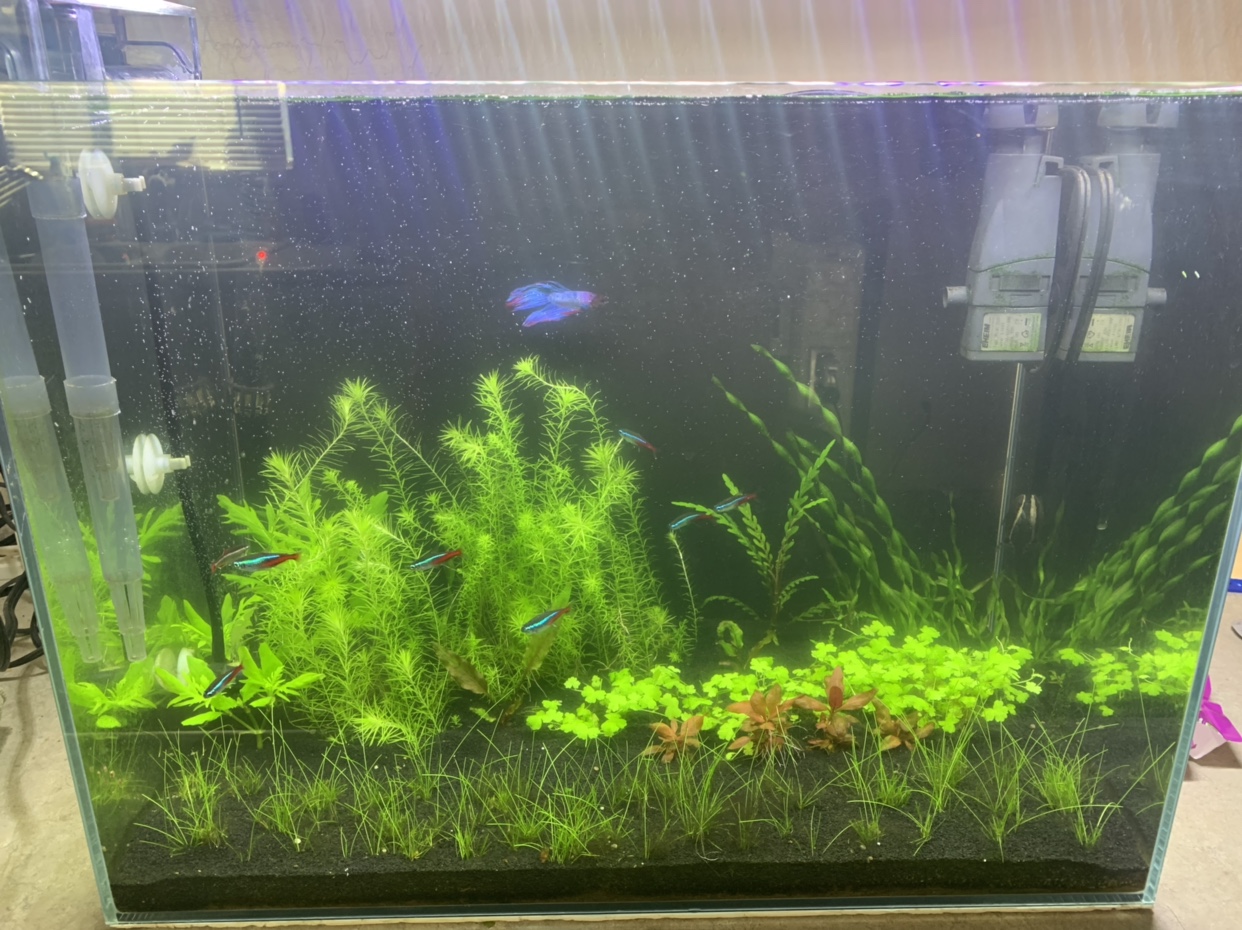 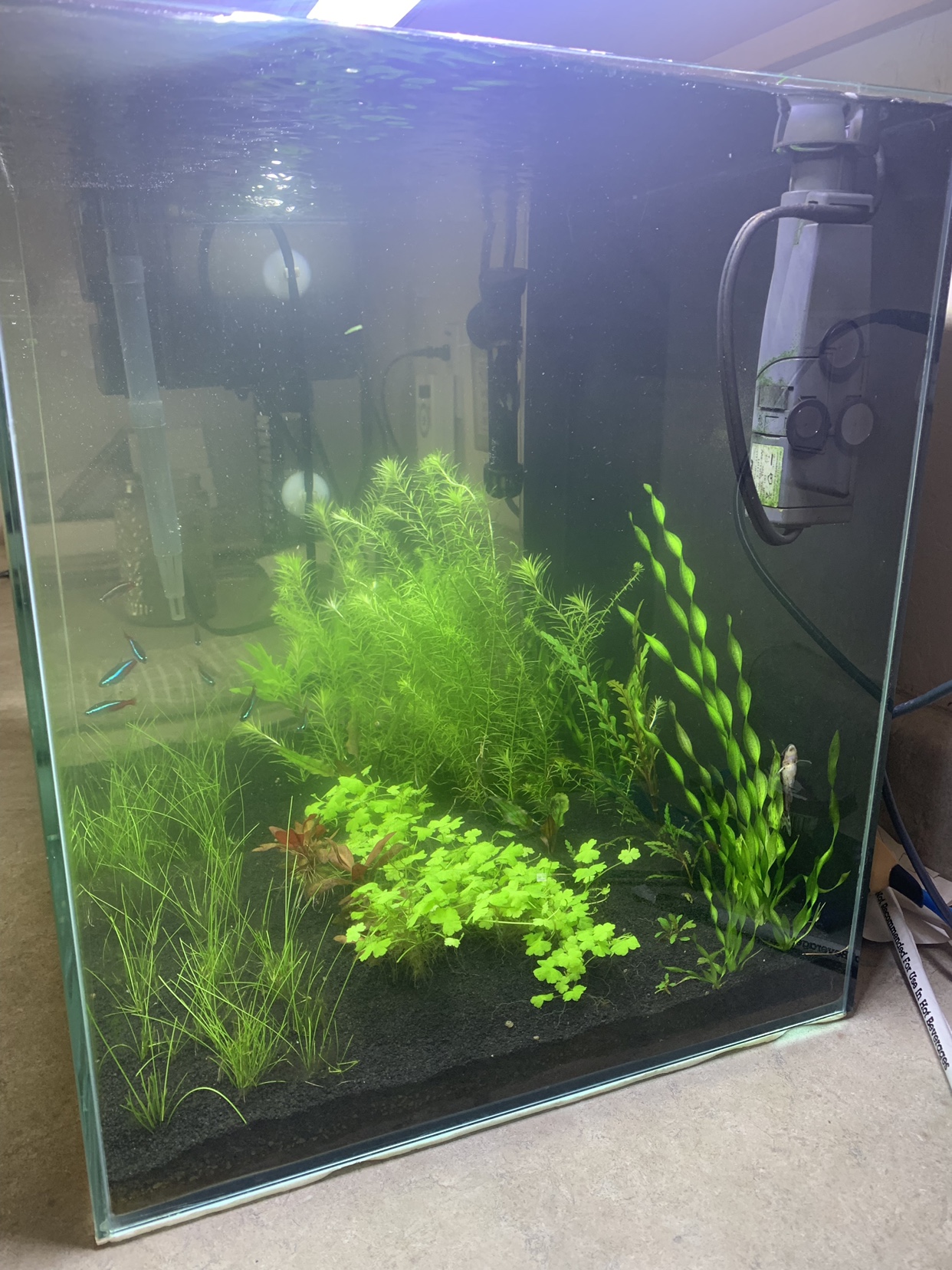 So Ive been getting ro water from a local purified drinking dispenser and its been annoying adding cal/mg/k to the containers trying to dissolve them prior to adding to the tank so this time I used a 1/2 liter bottle or so and shook up the powders in that instead and just added it after the tank was full again by pouring it into the top of my aquaclear. This was way better and quicker. Gave the tank a milky look for about five minutes and then was nice and clear.

(View User Tanks)
PTrader: (4/100%)
Join Date: May 2015
Location: Phoenix Arizona
Posts: 975
Green water! So I was having an algae outbreak in my tank and even my filter media in my aquaclear was getting thread algae growing on it so I removed the ceramic media and kept the sponge in and added another sponge. Figured the plants and bacteria elsewhere would be sufficient for bio filtration. Within two days green water developed. Did me removing that media actually open a door for this to happen? Lighting had been decreased last week and other than the filter no other changes have occurred. The tank gets no direct light but does get the usual ambient light from the house. What do you all think? I unplugged the lights and co2 but if anyone has another option that would be great. I cant get a uv sterilizer at the moment. Anyone used h202 for green water before?

(View User Tanks)
PTrader: (4/100%)
Join Date: May 2015
Location: Phoenix Arizona
Posts: 975
Just finished a 4 day blackout followed by a 70% water change. Looks clear for now. Staghorn seemed to keep growing during this time throughout the hairgrass so I did a hydrogen peroxide treatment with some manual removal. Well see on that one.

I also put a shade on the planted+ so I am expecting par to be around 50 or so right now.

Im surprised by these imbalances but maybe just the tank cycling/settling in still. Possible that I had an ammonia spike from pulling some dirt during replanting but I did siphon it out right away so not sure. The staghorn was first, then I removed some media because of staghorn growing on it and then two days later green water.

I have read that staghorn can be caused by high iron? My dose doesnt seem like a crazy high dose. The unknown of the dirt is kind of annoying. I dont think Ill use it again since I have my hands in there uprooting and replanting too much. Maybe for a low tech setup Ill do it again as I have done before.

Any thoughts are welcome. 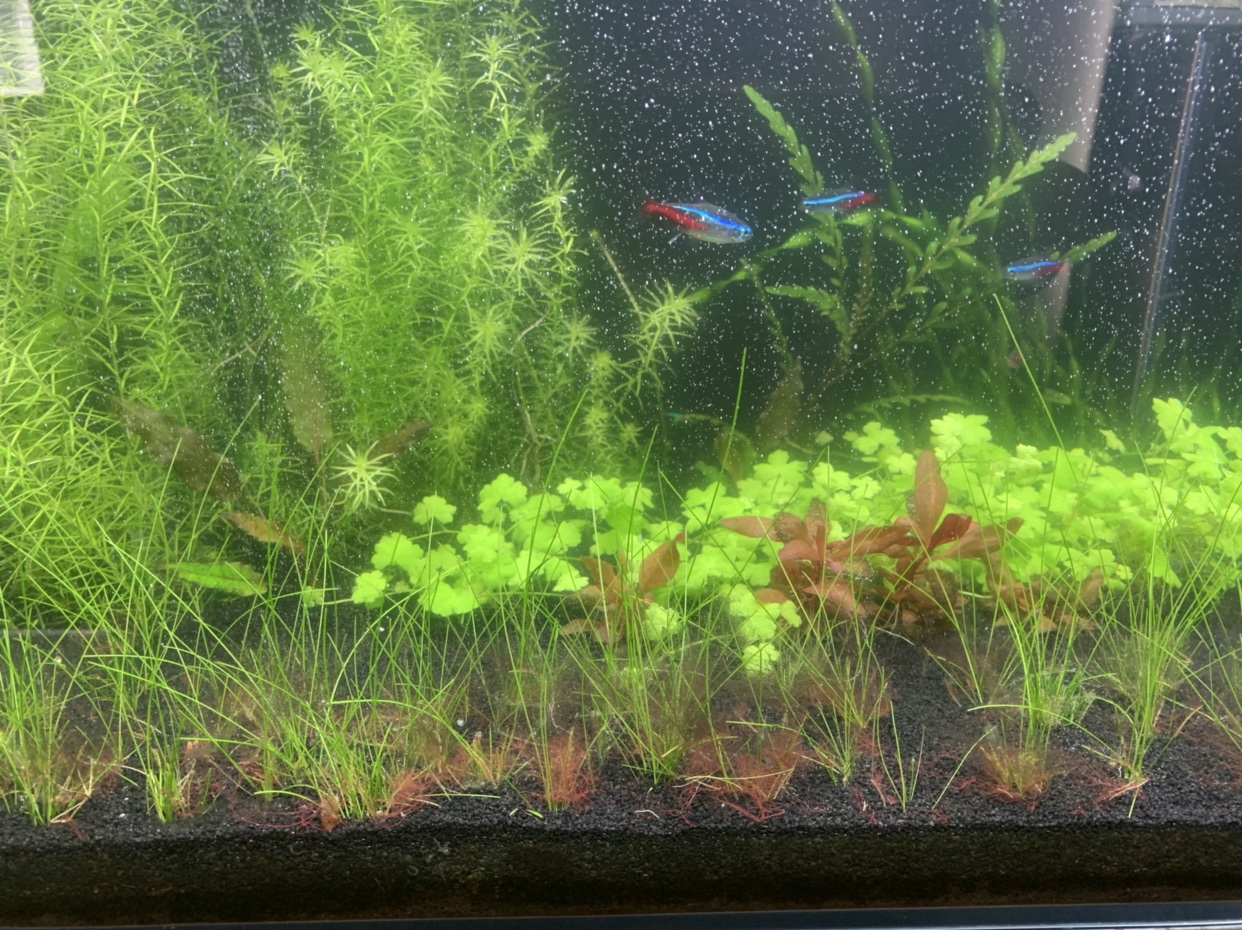 I think Ill do another water change and trim the hairgrass tomorrow after the staghorn has died off more.

The only change I have made to correct the algae issue is a reduction of lighting via a screen on the light. Ill keep it at just that over the next two weeks and then reevaluate. 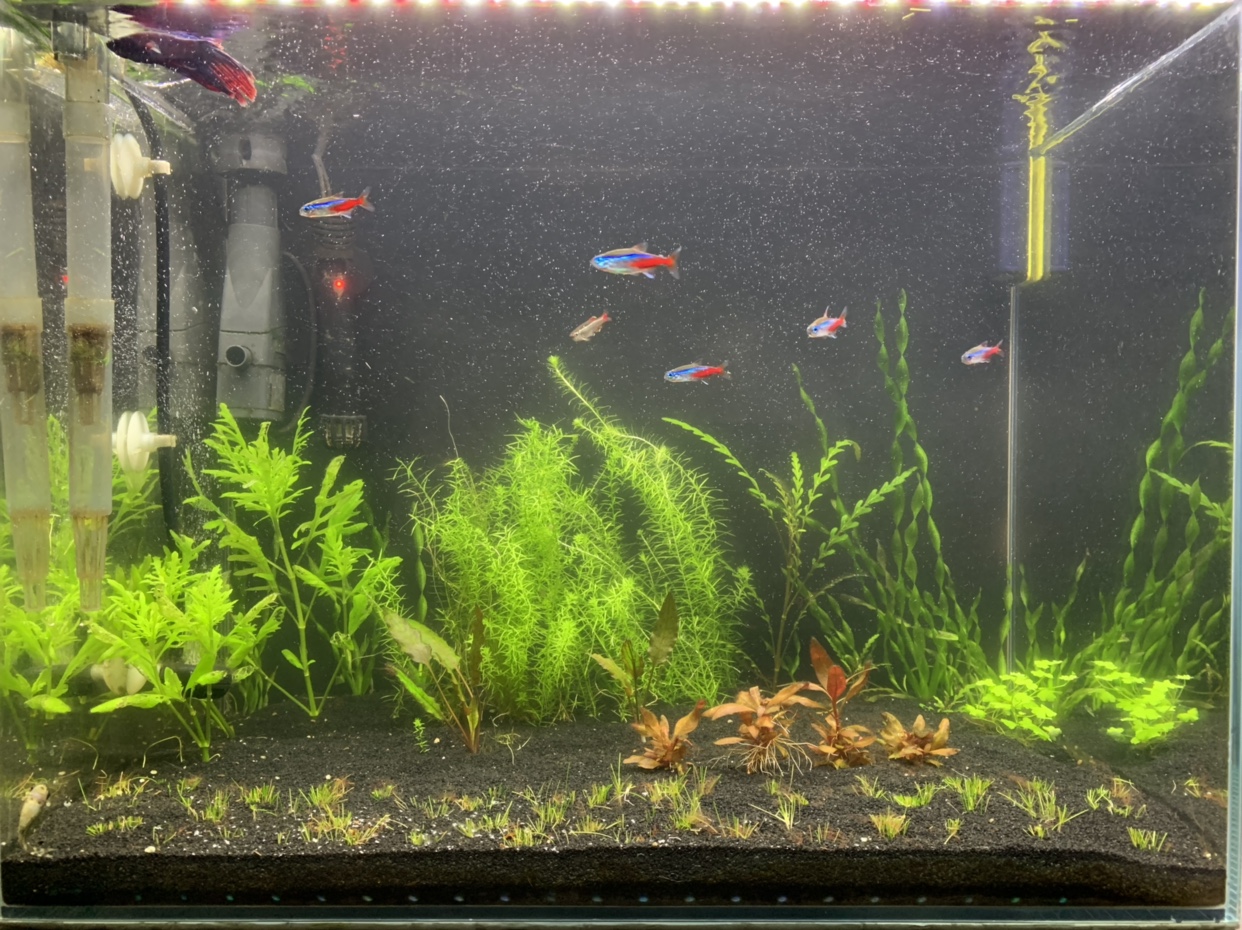 Cut the hairgrass all the way down. Of course the algae stuck to the base of the plant making it so I couldnt get it all out. Also, the hairgrass seems to grow quickly upwards but doesnt seem to want to spread. Help! Lol. 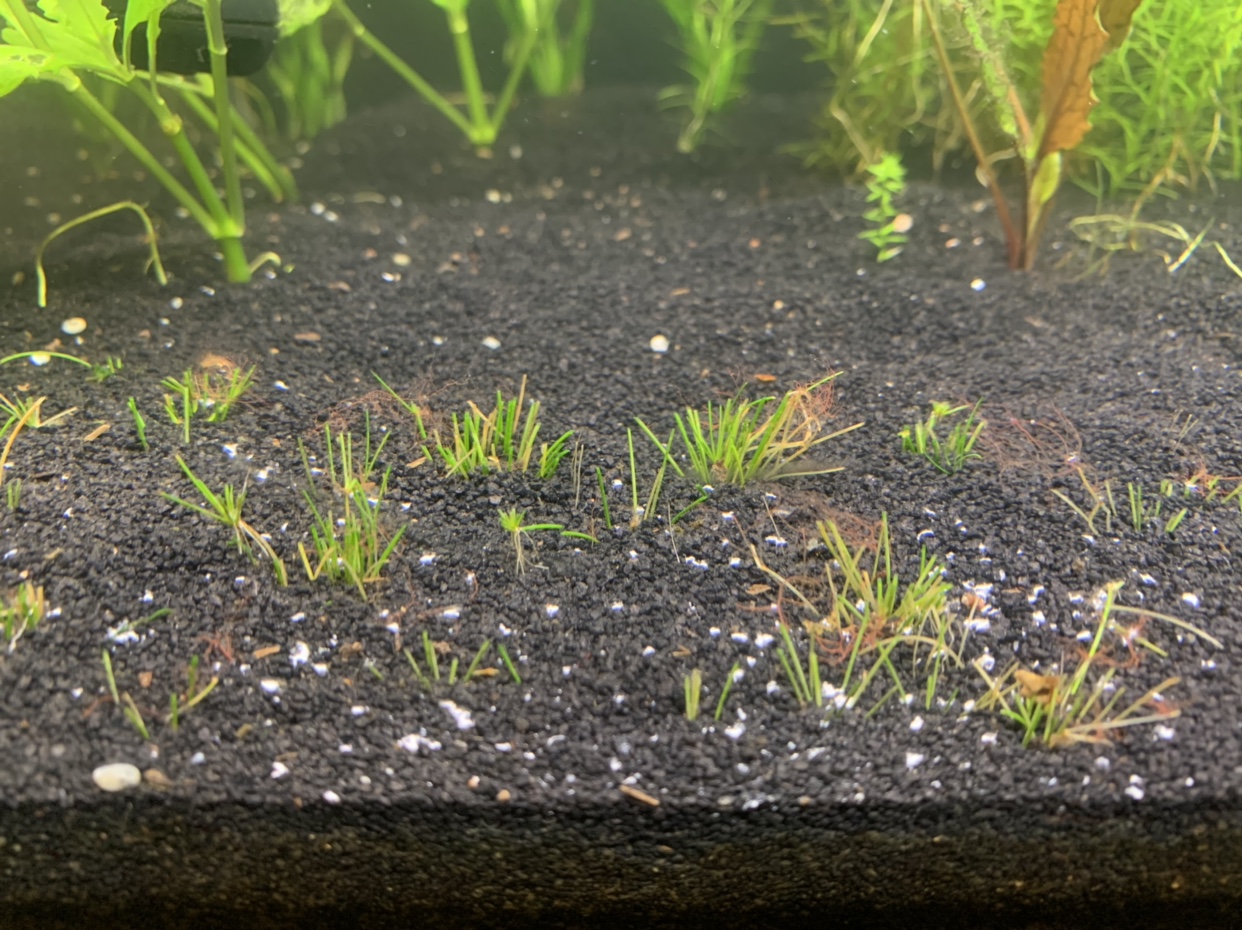 Ar mini being typical for me. Good new growth old growth slowly gets drab looking. Also have some upturned leaf. Ill give it a week or two before changing anything as I just cleared some breathing room for it by removing a bunch of H. Tripartia. Spiralis and pinnatifida looking cool. I want the H.P. to take over that space in front of the large one to have a little bushy grouping of it. 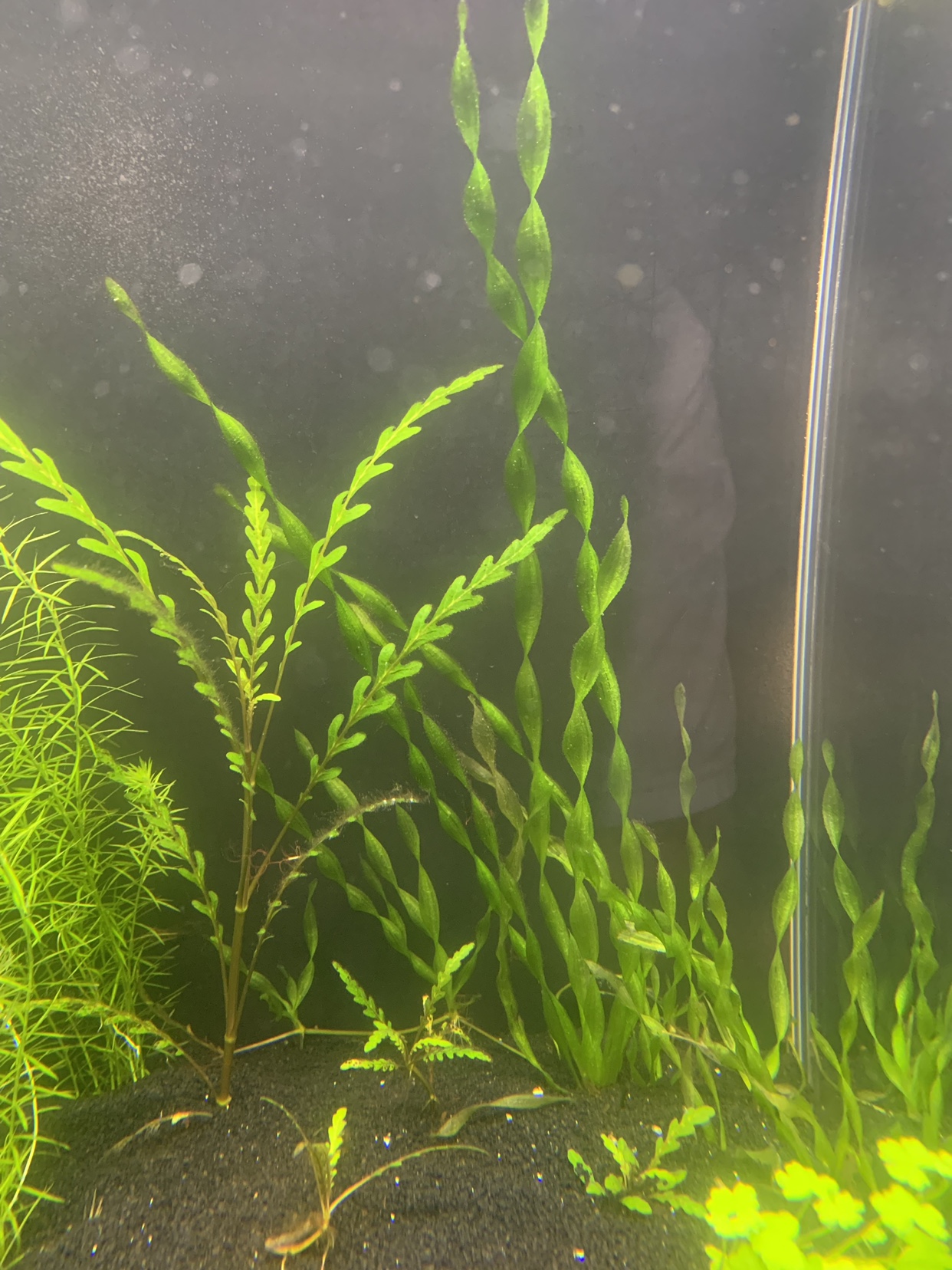 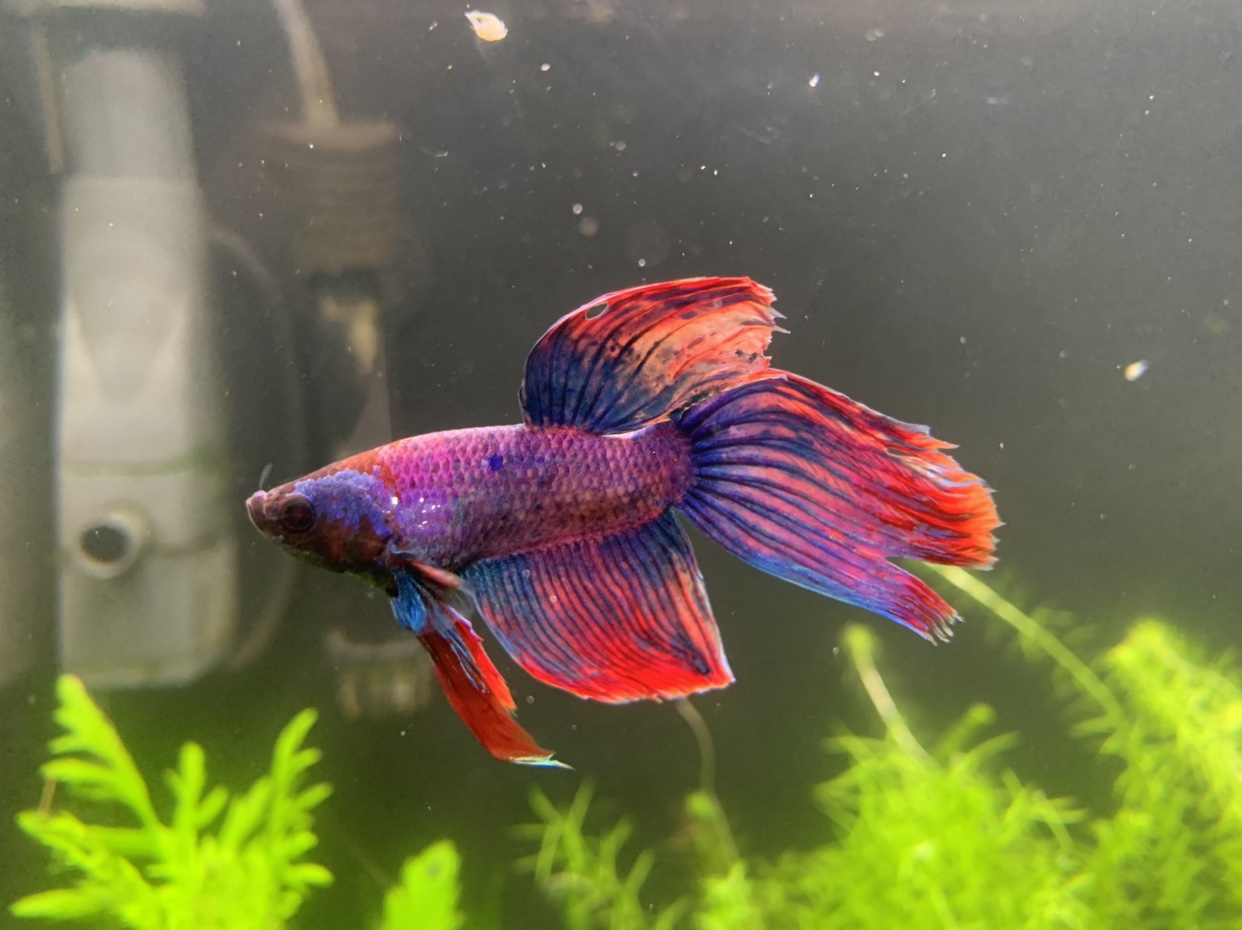 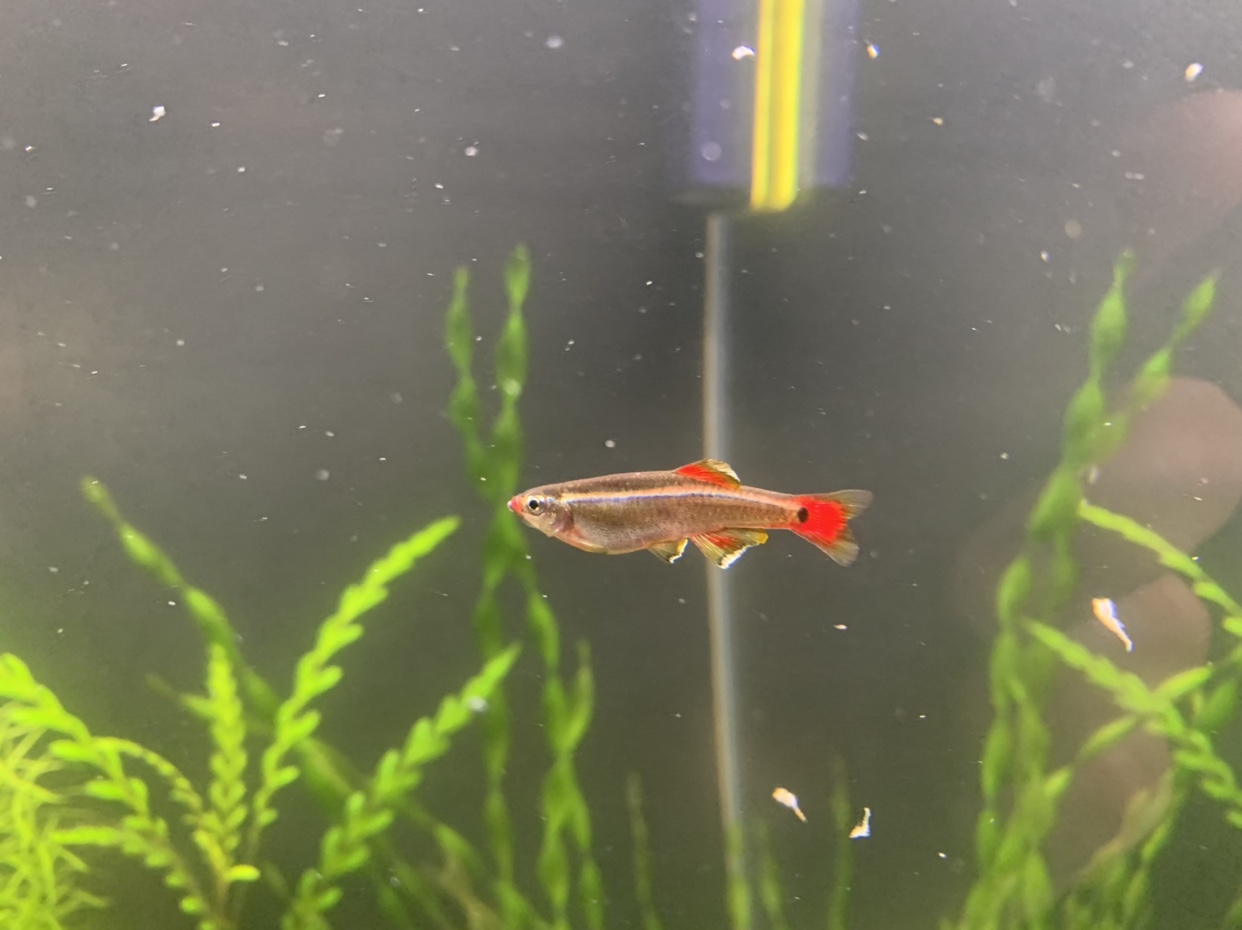 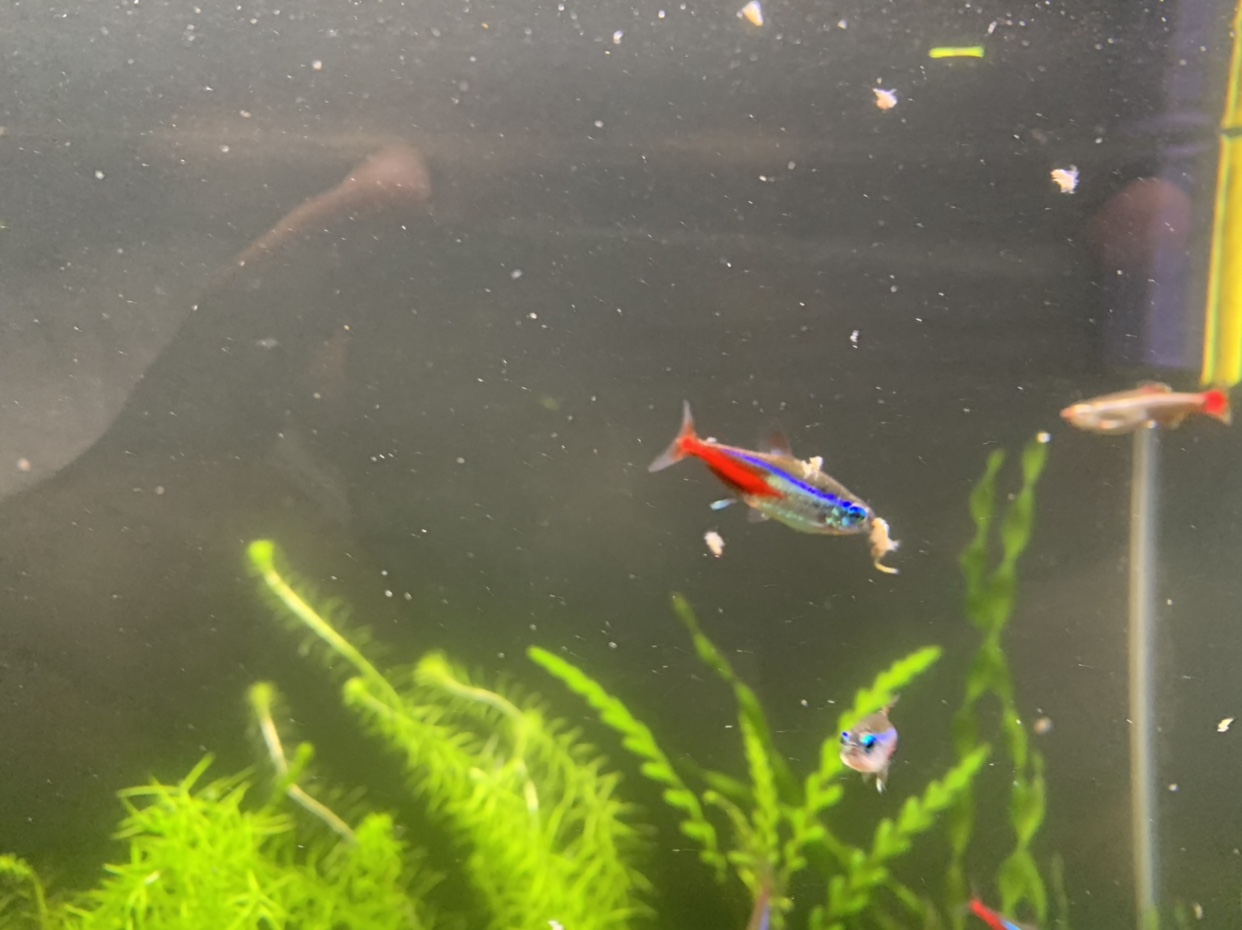 Update: ended up breaking down this tank and resetting it up after building a new stand for it. May start a different journal later.