(View User Tanks)
PTrader: (0/0%)
Join Date: Jan 2019
Posts: 8
10 Gallon Shallow Iwagumi - First Tank
New to the hobby and just finishing my first tank. This forum has been tremendously helpful in learning about everything from substrates to plants to co2.

The tank is a UNS 60S which measures 23.6 wide x 14.2 deep x 7.1 tall. I had originally bought an Aqua Japan and an Aqua-something (forgot the name) tank but returned them because of quality issues. The Japan one wasn't too bad, it had decent seams with a moderate amount of visible silicon while the Aqua-something(forgot the name) was absolutely terrible. The glass in the seams didn't even touch and the silicon was gobbed in there with reckless abandon. The UNS on the other hand is an absolutely stunning tank. The seams/corners are all mitered at 45 degree angles and they fit perfectly together. The seam is so tight that there's literally no visible silicon anywhere. The glass is also twice as thick and incredibly clear. I'll never buy a tank that isn't UNS going forward.

Substrate ended up being the most challenging decision for the tank. I couldn't find a reliable consensus on what the best substrate was let alone how to properly mix them. I ended up with a combination of Fluval Stratum and Eco Complete. I put the Eco Complete on the bottom and Stratum on top because planting in Eco is next to impossible. Eco Complete is also longer lasting so substrate changes will be easier if I can just scrape the surface layer off sometime down the road.

I went with an Iwagumi layout using Petrified Wood. Luckily being in Arizona it's fairly abundant at most rock stores and at a relatively good price ($2 a pound). I chose pieces which were heavy in red and gold hues to compliment the red accent plants that are growing between them.

For filtration I went with a SunSun 603B canister filter. I've read mixed reviews on this but it's hard to beat for the price at $25 and one of the few canisters that works in small tanks. So far I'm very happy with it and it runs absolutely whisper quiet. I used Jardli Glass for the out-flow, in-flow, and co2 pipes and replaced all the tubing with clear to make it as invisible as possible. I bought this co2 checker because it's a bit smaller than all the others like it on Amazon. It also came with the testing liquid.

Co2 is pretty daunting for someone with my experience but I think I found a pretty good setup at a good price. I found a 5 pound tank on craigslist for $25 and bought a DoubleSun regulator. It's a dual regulator that comes with a bubble checker, needle valve, and solenoid. It seems to compare better than a lot of the name brand ones but time will tell. So far, so good. Easy to adjust and I'm basically trial and erroring to figure out how much co2 I need. Right now it's about 1.5 bubbles a second.

I went through 3 different lights on amazon before settling on this one from NICREW. It's much brighter than the other two I bought and is made specifically for planted tanks. It has white and blue led's and really makes the tank pop. I've had the tank up and running for 3 days and already have plants pearling so I'm guessing things are good in the photosynthesis department. I wasn't a fan of how the light mounted to the tank so I threw together a custom holder for it out of some scrap Mesquite I had laying around. Initially my wife was fairly against having an aquarium because she thought they were ugly so I'm trying to create something which blends in with our decor. She approves.

For plants I used the following..
I'm very happy with everything but plan on making a couple small changes. The front middle rock is a bit too tall and the overall height of the front substrate needs to be lowered a bit. I'm taking the large rock to my lock rock store tonight and they're going to slice about 1-2 inches off the bottom of the stone so it will sit lower allowing better visibility to the focal stones and plants behind it. I'll remove some of the substrate at the same time. Overall it should look exactly the same but provide a bit more visibility and depth viewing front to back.

Ill post pics after I cut the stone and thin the substrate as well as progress pictures as the plants carpet and grow (hopefully). I'm not sure if i can swing multiple tanks so it's likely this tank will go through multiple redesigns once everything has grown in and I get bored. Soon as I get the co2 indicator to a consistent 'green' ill add fish. Originally this was for my son's betta but I think he's a little too large and will throw off the scale of the tank. May buy some tetras or something but I know almost nothing about fish so I'm open to any suggestions.
Last edited by Tapiozona; 01-02-2019 at 07:08 PM. Reason: Changed Title to 'shallow' from 'long'
Tapiozona is offline
Quote Quick Reply
post #2 of 2 (permalink) Old 01-28-2019, 04:25 PM Thread Starter
Tapiozona
Algae Grower


(View User Tanks)
PTrader: (0/0%)
Join Date: Jan 2019
Posts: 8
For some reason my posts are being flagged and not showing up. Trying again. Here's a 3 week update. I had to change the rock in the front middle because the folks who cut the stone for me used Diesel Fuel (even though they knew it was going into an aquarium) as lubricant. For anyone unfamiliar with Diesel fuel, it's impossible to remove from anything it touches. I tried everything known to man including boiling it for 12 hours straight and nothing made a dent in it.

It's hard to tell that there was any growth but looking at the new pictures besides the originals, all of the plants have made significant growth, mainly thickening out. I had to rearrange a bit in the front and all of the plants I moved had massive root growth (3 inches+) so I'll take that as a positive. I also lowered the substrate a few inches since the tank is so shallow.

I had an algae bloom 2 weeks ago when i went on vacation and my mother in law left the lights on the entire time and somehow managed to turn the filter off. It's been a huge struggle removing the stringy stuff that's wrapped around the plants and the top layer of substrate but I'm making progress. I can't tell if it's alive or dead because it's all sorta brown and slimey. I don't want to use chemicals so I'm going to try a 3-4 day blackout to make sure it actually is dead. I also added 12 shrimp (3 amano, 9 red cherry) to hopefully eat all the algae. 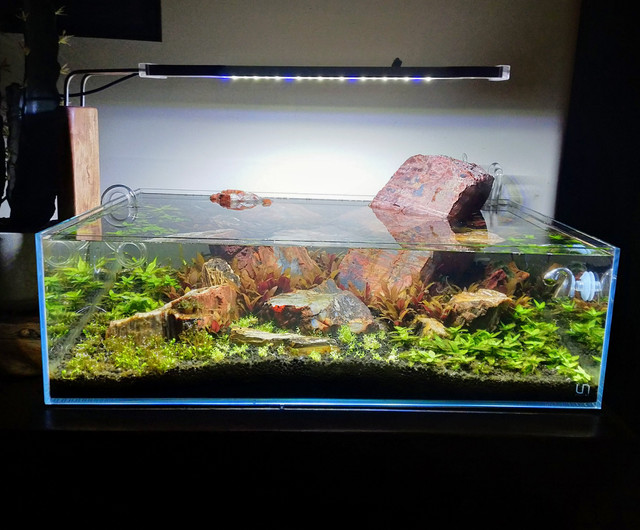 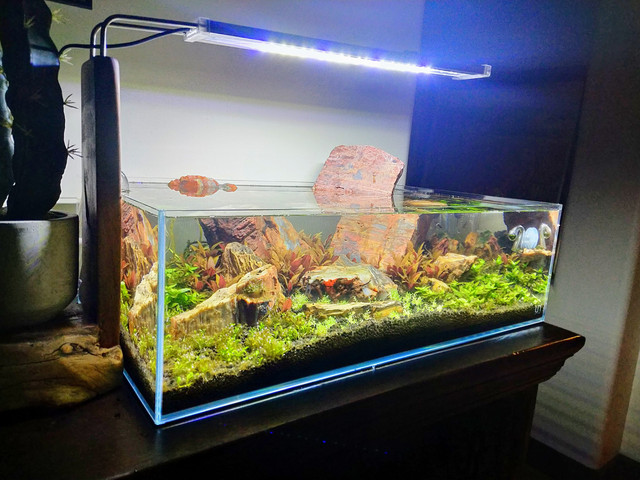 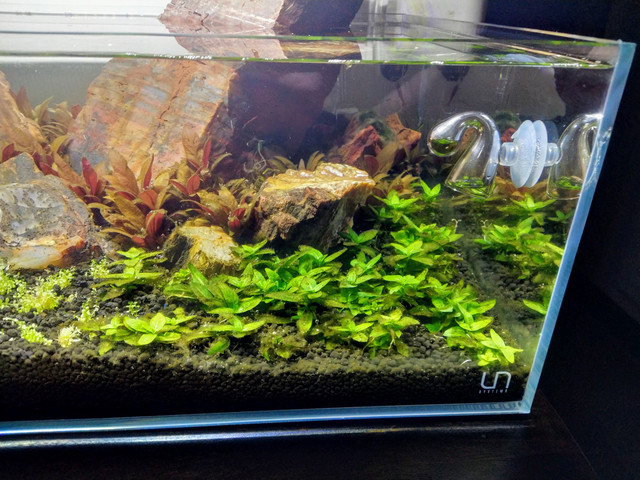 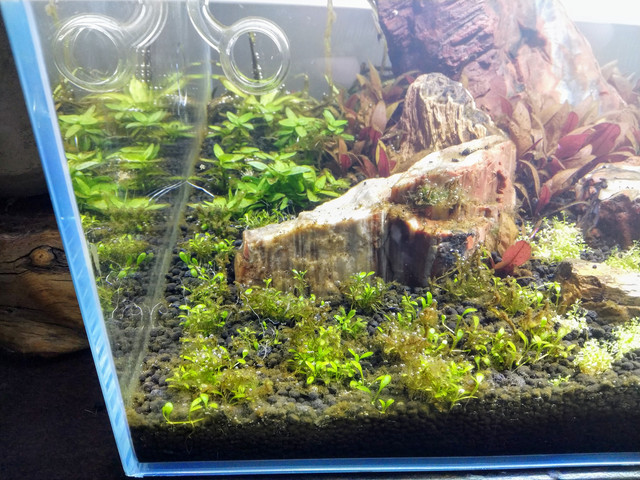