So one of my LFS had this small discus that was beautiful and a great price. Always wanted to try them but never had the nerve after hearing all of the horror stories. But I figure I should have all the right elements to keep them (RODI water, weekly 50% water changes, etc) except for the hot water. So I bought a Hydor 200w inline heater then I plan to plumb in a bump the temp up to 80deg. This is still on the low side for discus, but I don't want to cook everything else in the tank. Without the heater the tank runs about 77deg due to the 8w UV sterlizer that's always on. 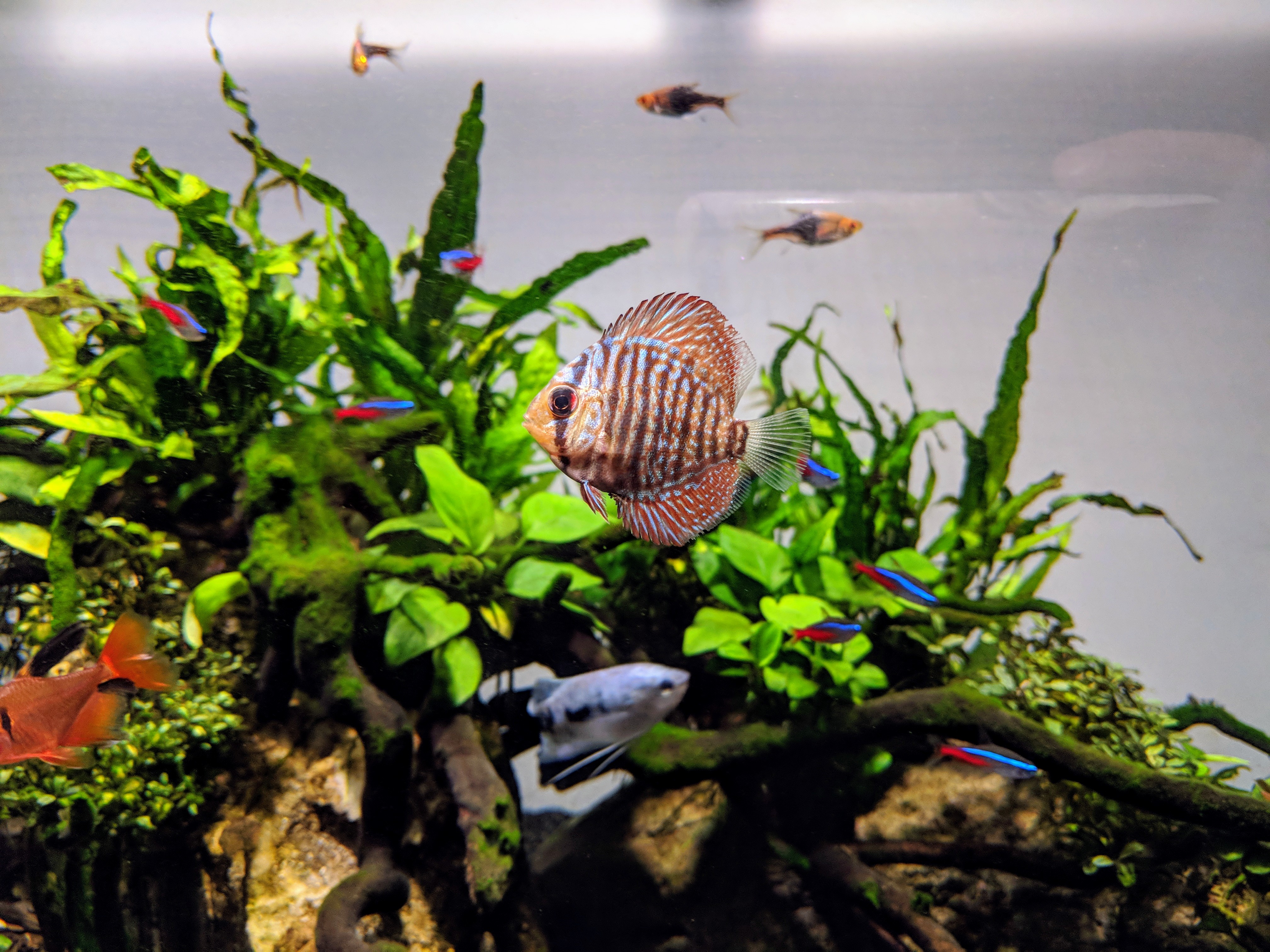 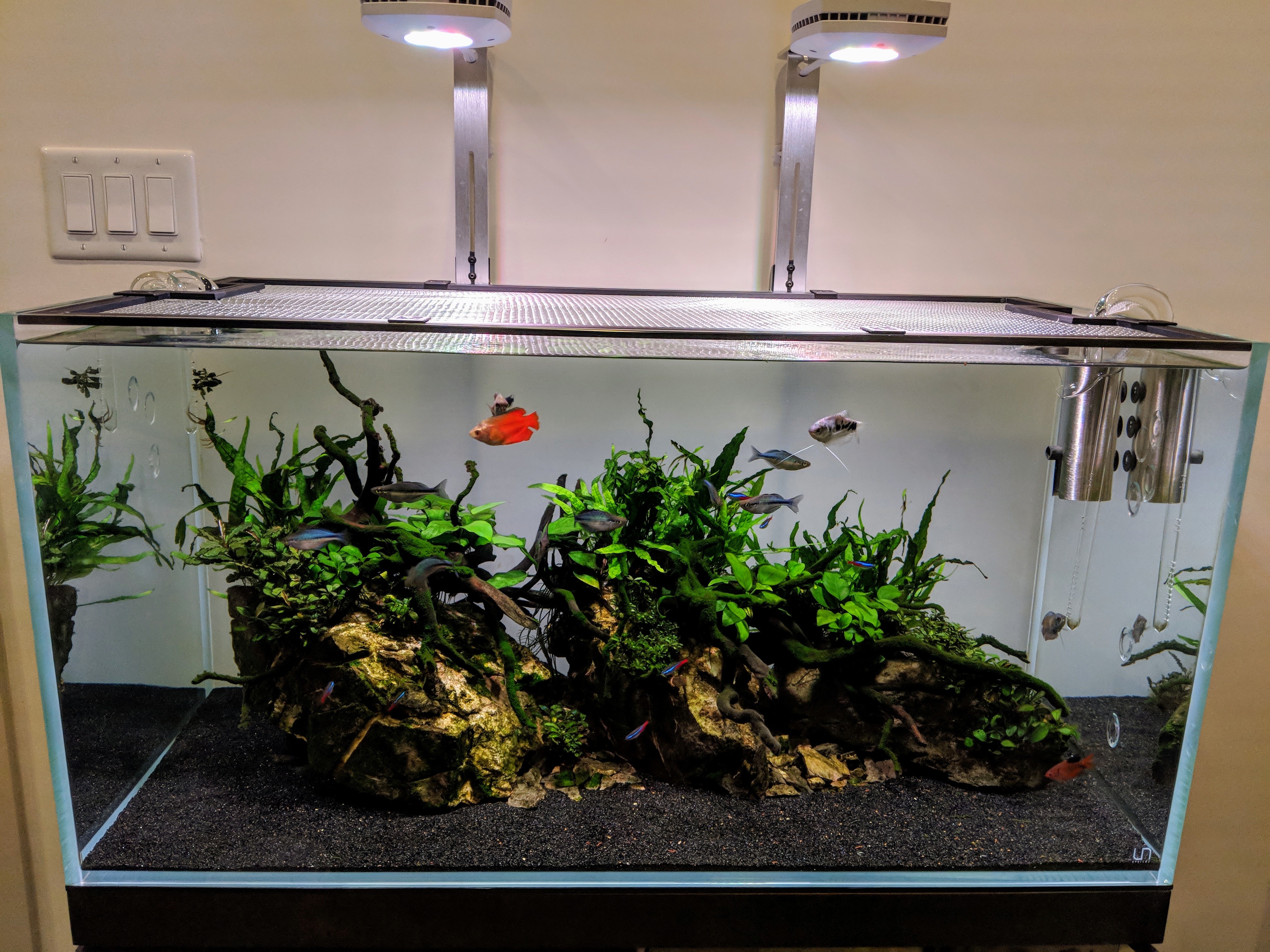 
(View User Tanks)
PTrader: (0/0%)
Join Date: May 2011
Location: Houston, TX
Posts: 237
I had an unexpected experiment this past weekend - how long can tanks survive without power... 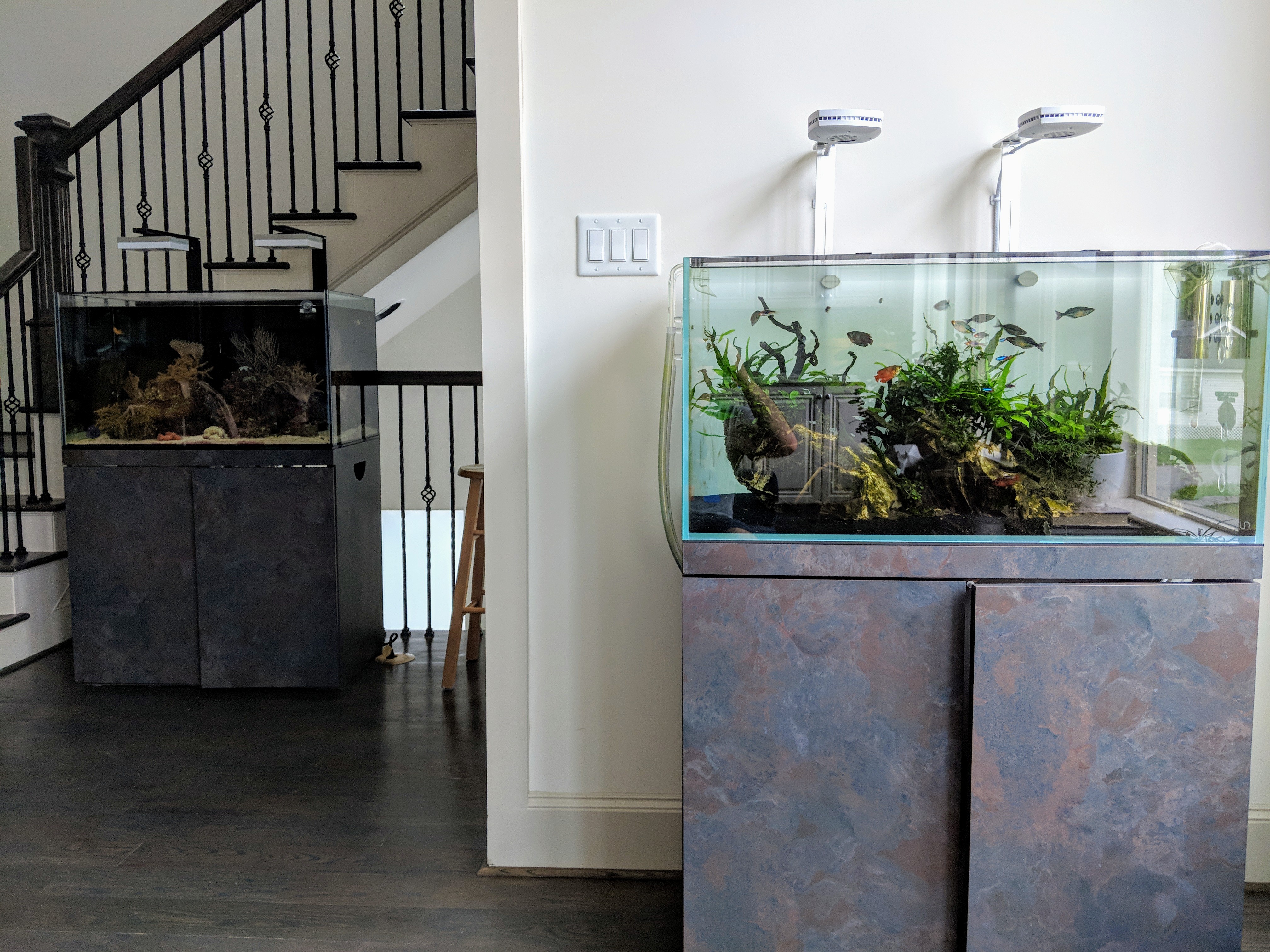 The power unexpectedly went out, not too big a deal, but after an hour I started to get concerned. Then I received notice that it may be 4-hrs before the power was restored. This wasn't an experiment I wanted to conduct!! I ran to the store and picked up some bait box battery powered bubblers to keep the tanks oxygenated and hopefully keep things going for multiple hours. 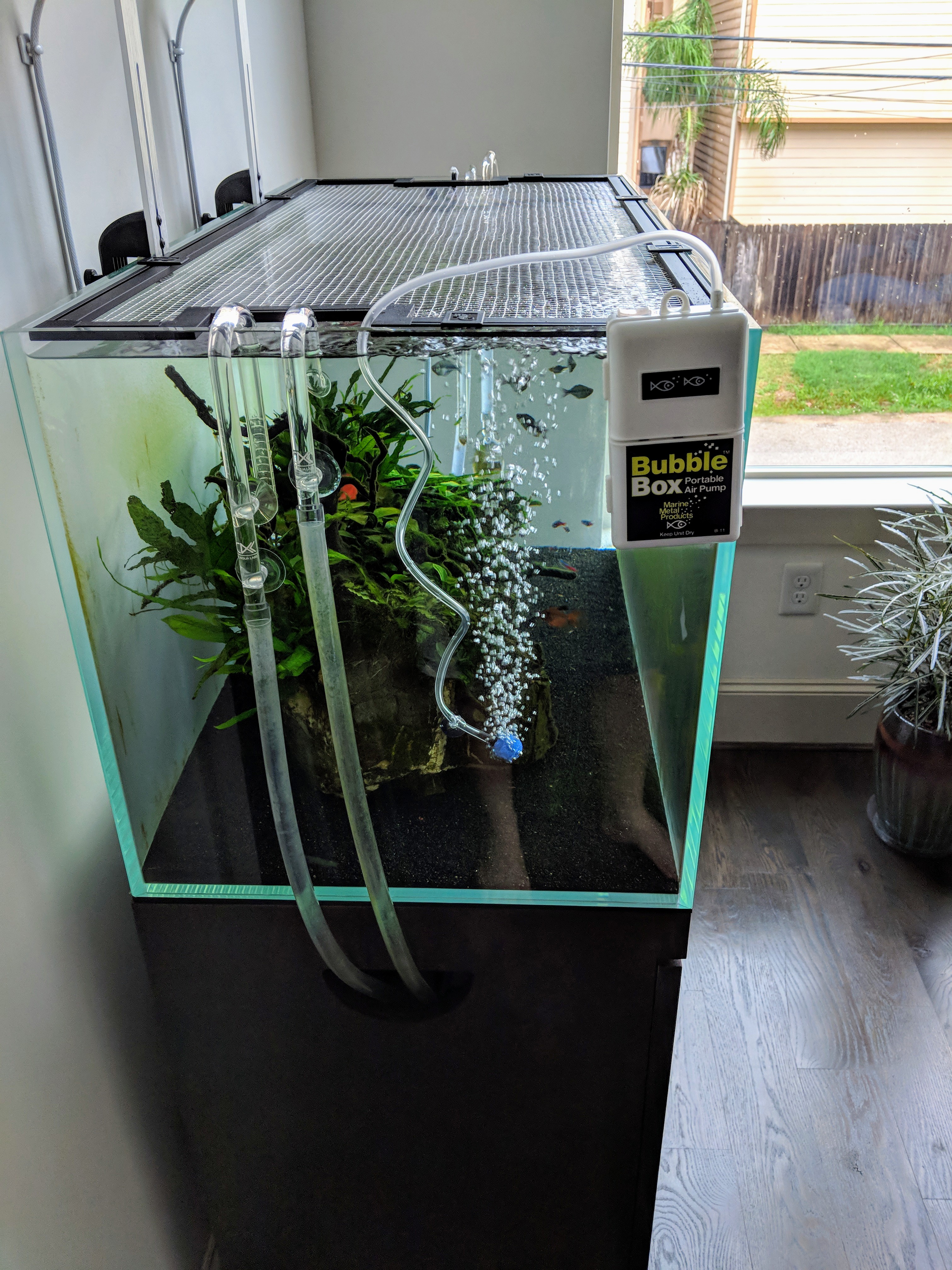 But after a few more hours I got notice saying it may be 8-hrs or more before the power was restored!! Yikes!

So I ran out again and bought a Honda EU2200i generator, something I had honestly been meaning to buy anyway as we are in prime hurricane season in Houston (and I have a little too much experience dealing with Hurricane's).

Of course, by the time I made it home the power had been restored. Everything was fine after 8-hrs of power outage total. 6-hrs of that time had the battery powered bubbler running. Potential disaster avoided. 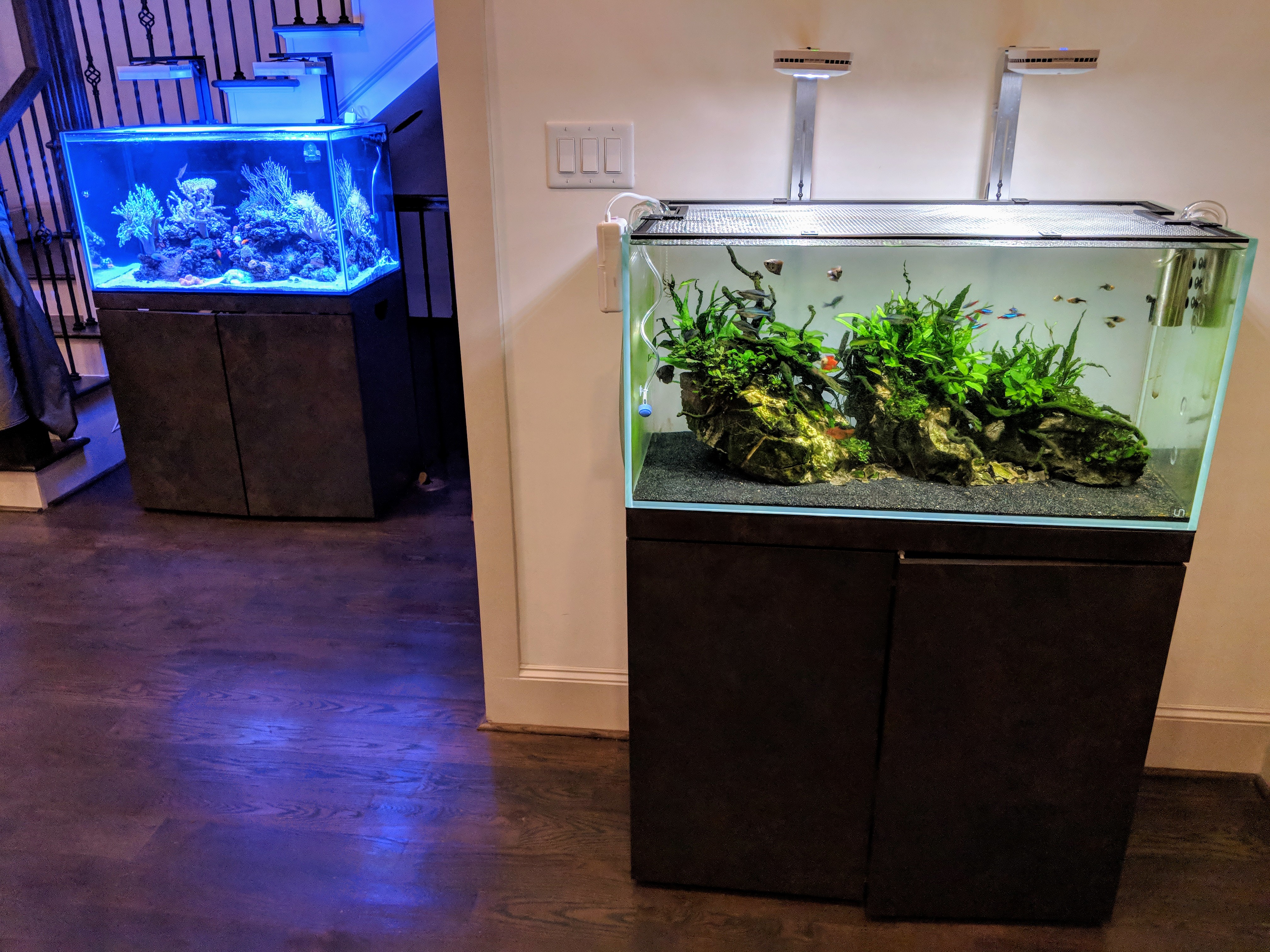 Sent from my Pixel 2 using Tapatalk 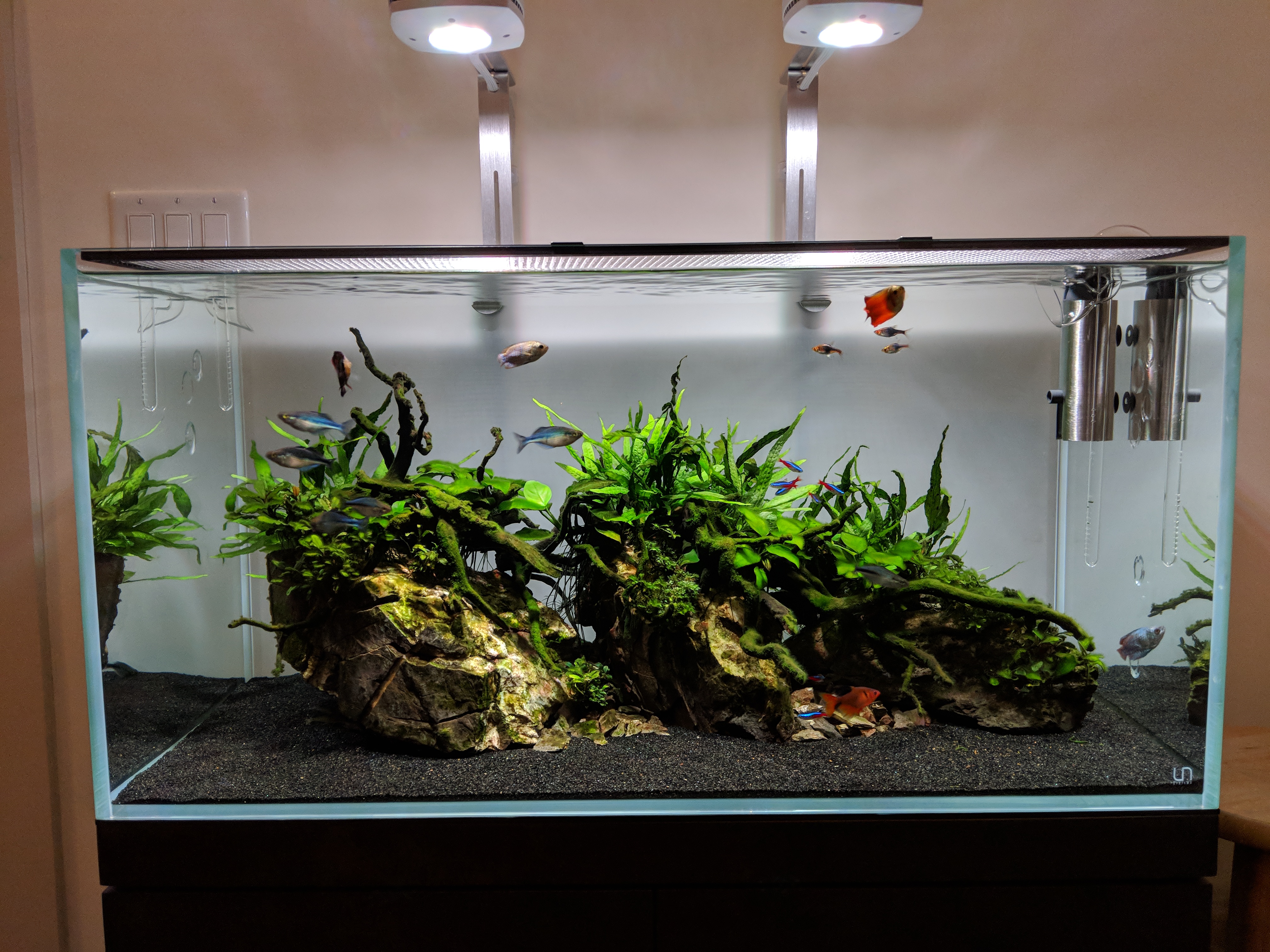 I guess the suction cups are getting brittle and I accidentally snapped the base of the pipe off trying to remove the suction cup to clean it. Oops!! Good thing my buddies at ADG had a handful of them used on hand and I was able to scoop one up quickly on the cheap. 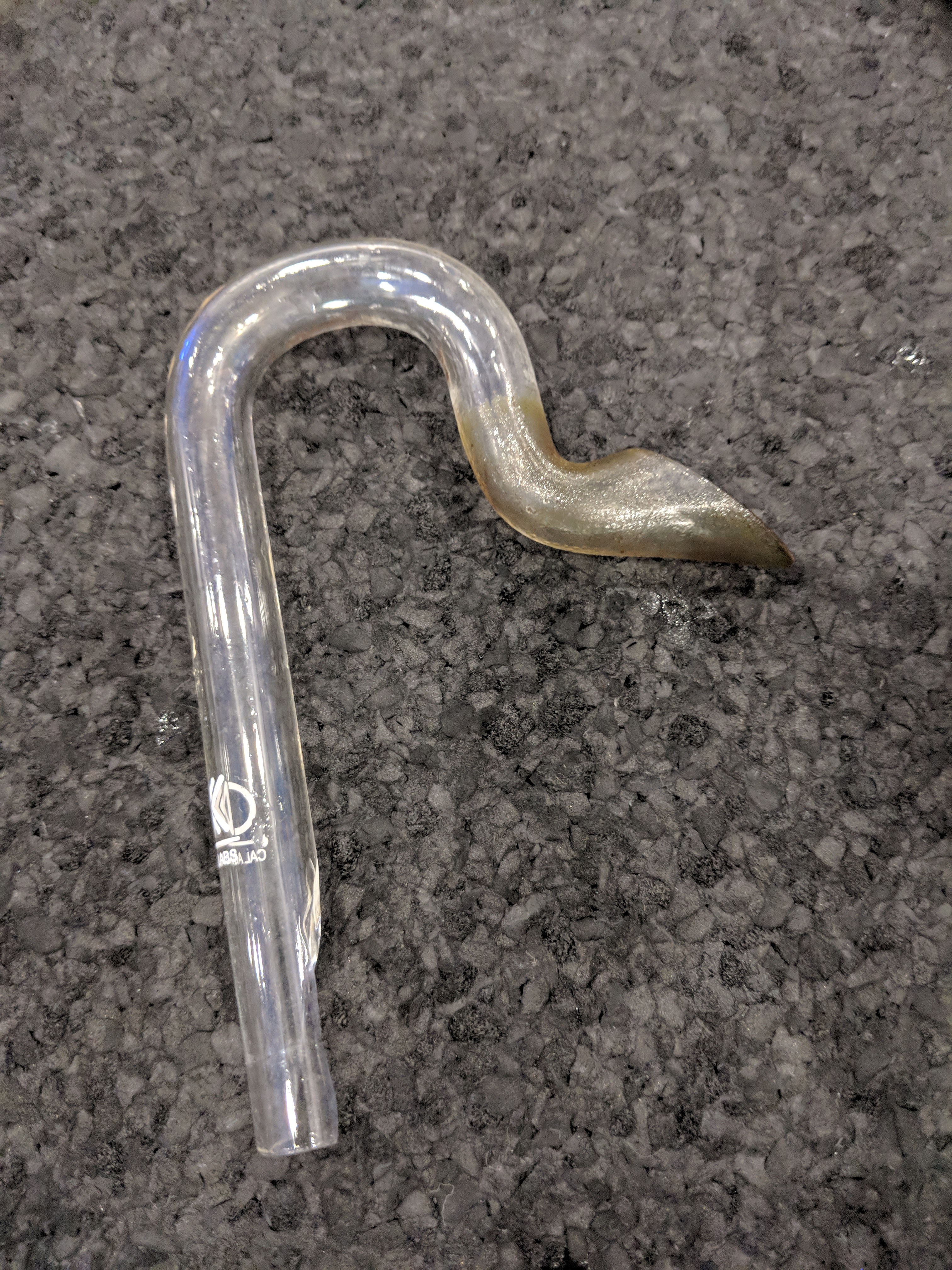 
(View User Tanks)
PTrader: (0/0%)
Join Date: May 2011
Location: Houston, TX
Posts: 237
After a month of success with the small royal red discus, I officially have the itch!!! I caught the gourami's and a few random "extra" fish that were in the tank and found nice new homes for them in friends tanks.

Then I made a trip over to one of my long time LFS's who had a large batch of discus that had been in for a couple of weeks and were looking fat, happy, and healthy and scooped up an assortment of 3 leaving me with the original royal red, a blood pigeon, red melon, and gold pigeon.

They looked much smaller in the tank at the LFS!! LOL! After a few hours of settling in they were already much less shy and had colored up considerably. I am super excited as this basically makes a perfect tank in my eyes!! Just hoping for long term success with them. 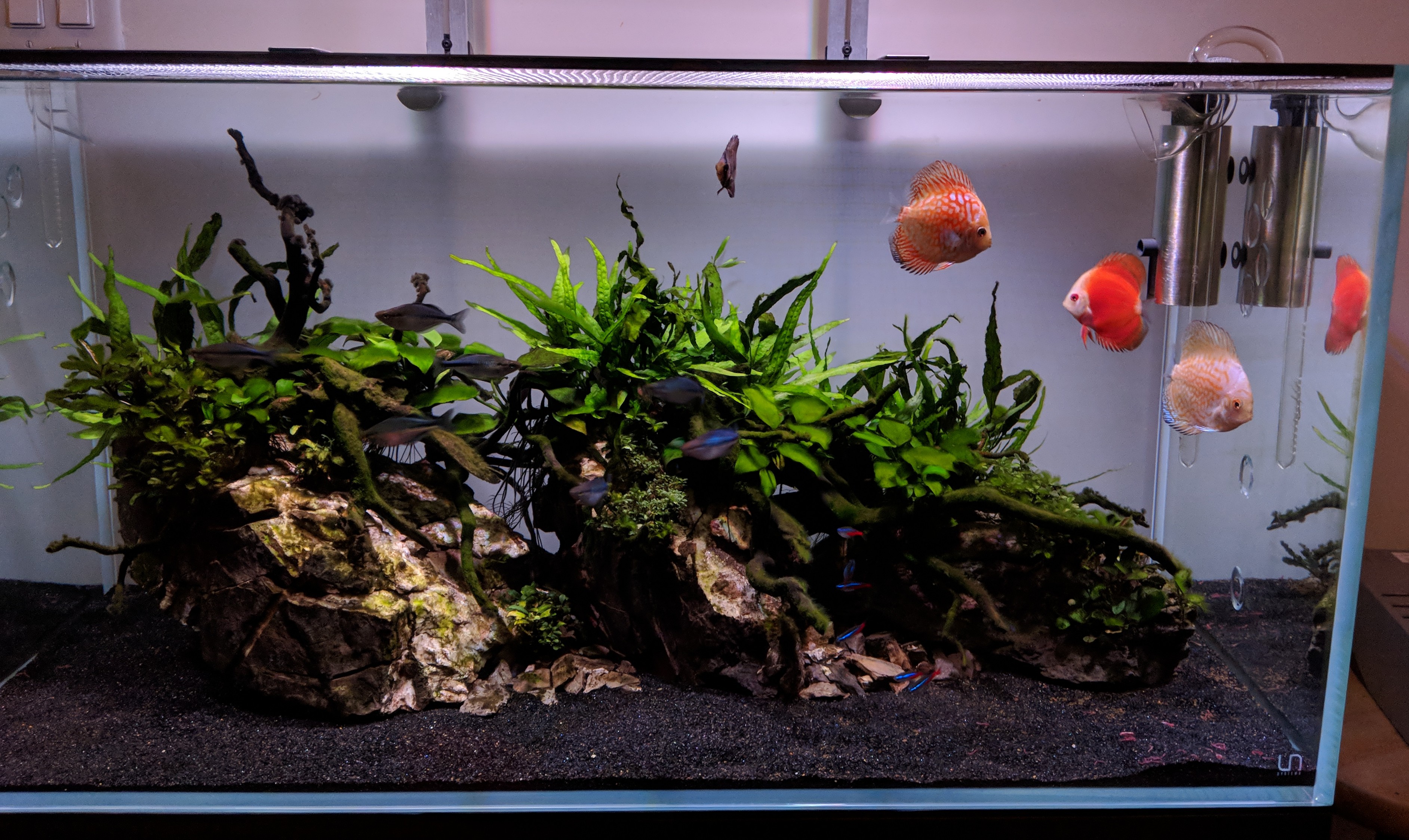 I am having a bit of a battle with algae on plants at the moment, which I believe is due to an imbalance in CO2 and fert dosing that I am working on getting resolved.

(View User Tanks)
PTrader: (0/0%)
Join Date: Aug 2014
Location: Florida
Posts: 466
Seriously I would go crazy with that amount of algae, increase co2 and ferts and cut down on the light. Hope that helps,great job on the tanks btw. Cheers
To view links or images in signatures your post count must be 10 or greater. You currently have 0 posts.
Powerclown is offline
Quote Quick Reply
post #23 of 140 (permalink) Old 10-12-2018, 03:17 PM Thread Starter
ange062
Planted Member


(View User Tanks)
PTrader: (0/0%)
Join Date: May 2011
Location: Houston, TX
Posts: 237
Quote:
Originally Posted by Powerclown View Post
Seriously I would go crazy with that amount of algae, increase co2 and ferts and cut down on the light. Hope that helps,great job on the tanks btw. Cheers
Trust me, it's not easy for me!! Driving me nuts! I think it may actually be due in part to removal of the gourami's - they we're constantly eating algae. I've also lost a lot of my amanos over time, I used to have about a dozen but they always figure out ways to crawl out of the tank even with the cover in place and I find them randomly all over the house. I added 5 more amanos and trying a group of 3 Siamese algae eaters for some natural control. And I actually decided to stop running CO2 for a while and cut out ferts all together until things are back under control. My photoperiod is already only 6-hrs but I reduced intensity down to an almost non-existent level, the amount of light is basically good for viewing only. 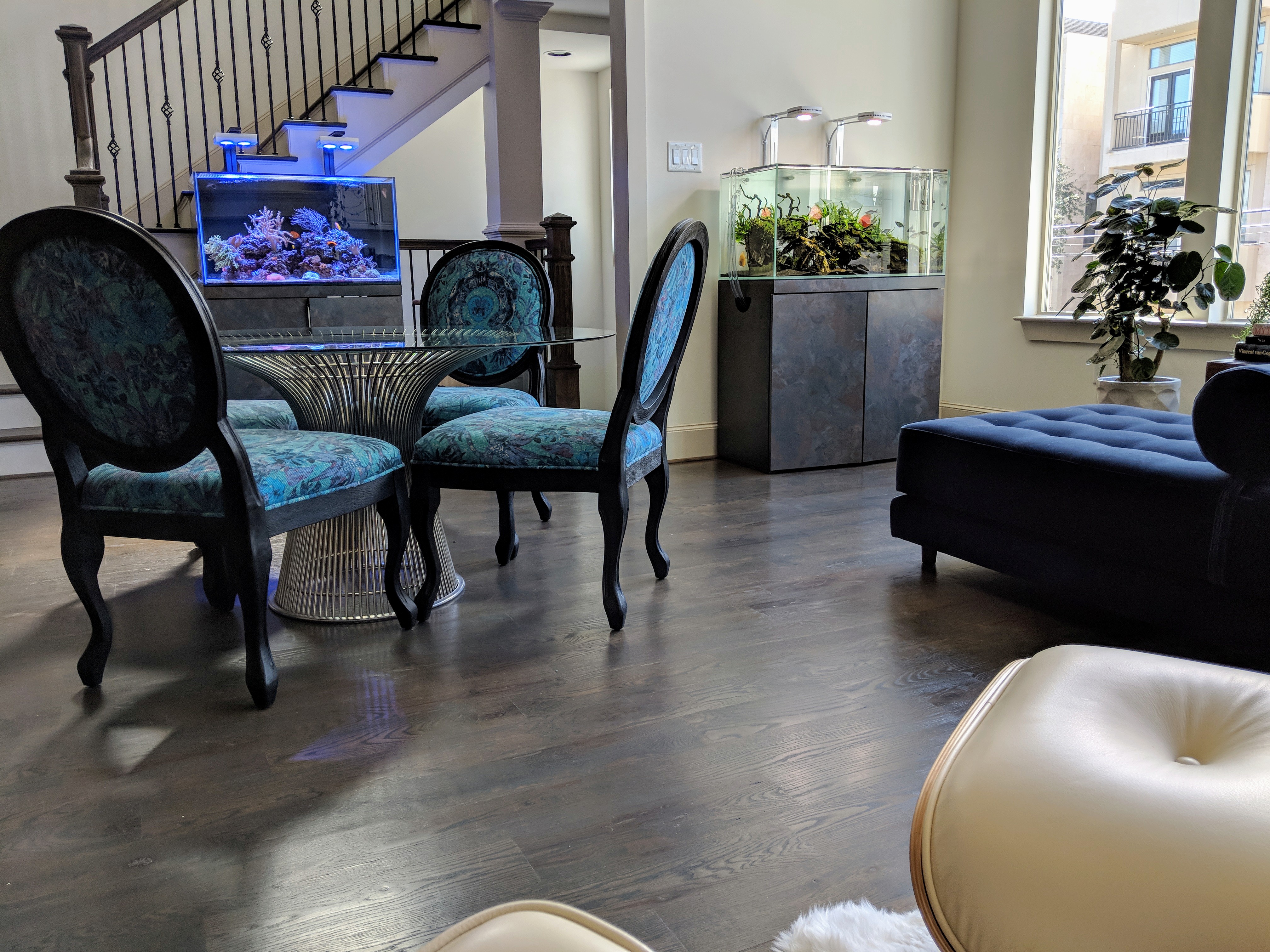 Quote:
Originally Posted by FreshPuff View Post
How 'bout a closeup of that reef tank

I can do one better!


(View User Tanks)
PTrader: (0/0%)
Join Date: May 2011
Location: Houston, TX
Posts: 237
Quote:
Originally Posted by ahud View Post
Do you have a write up on your reef tank?
Yes, I have a thread over on Reef Central for it, not sure if you're allowed to link to other forums on here.

The Siamese algae eaters and 5 extra amano made quick work of the algae problem, I was surprised how effective the fish were especially. 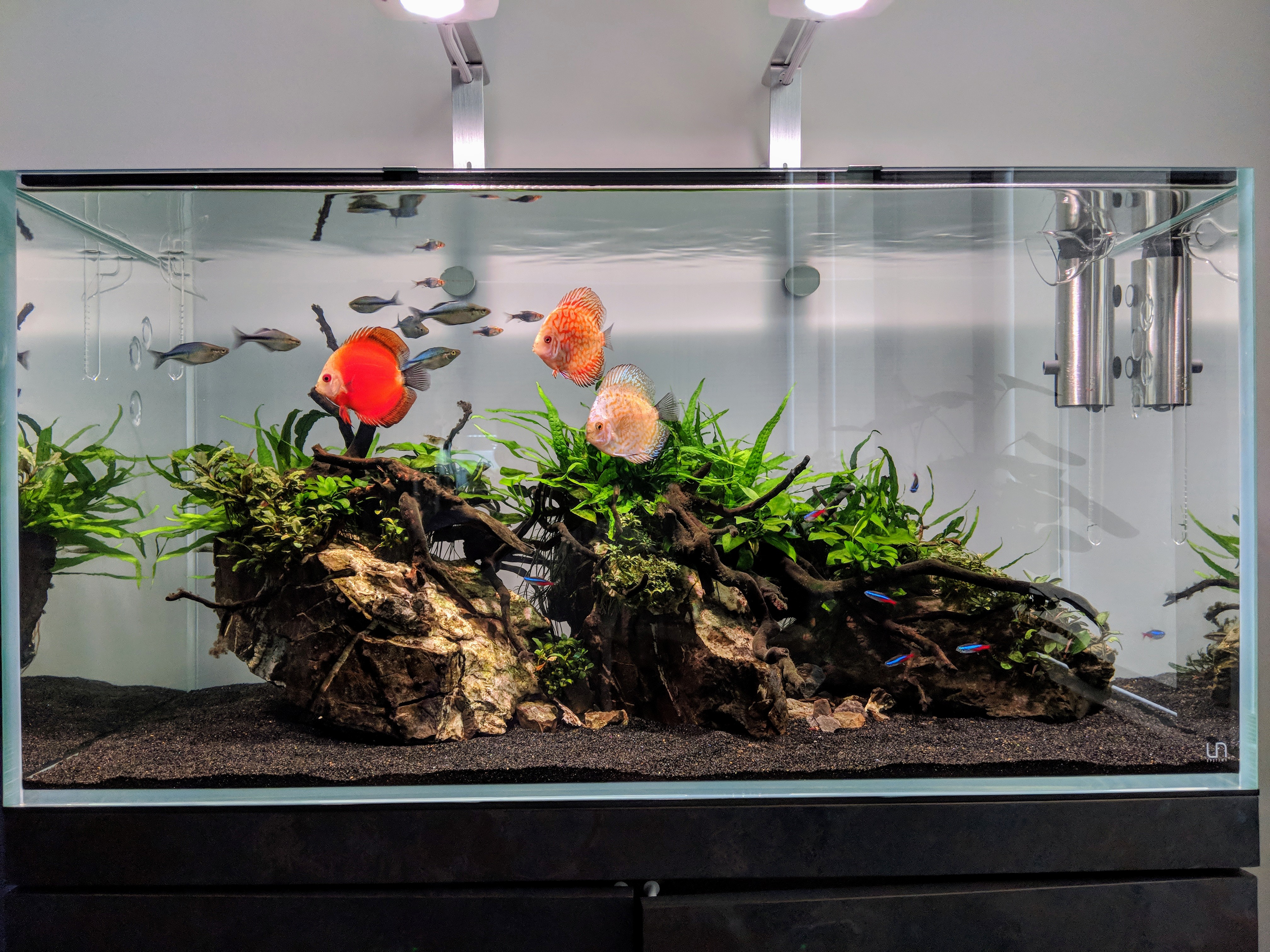 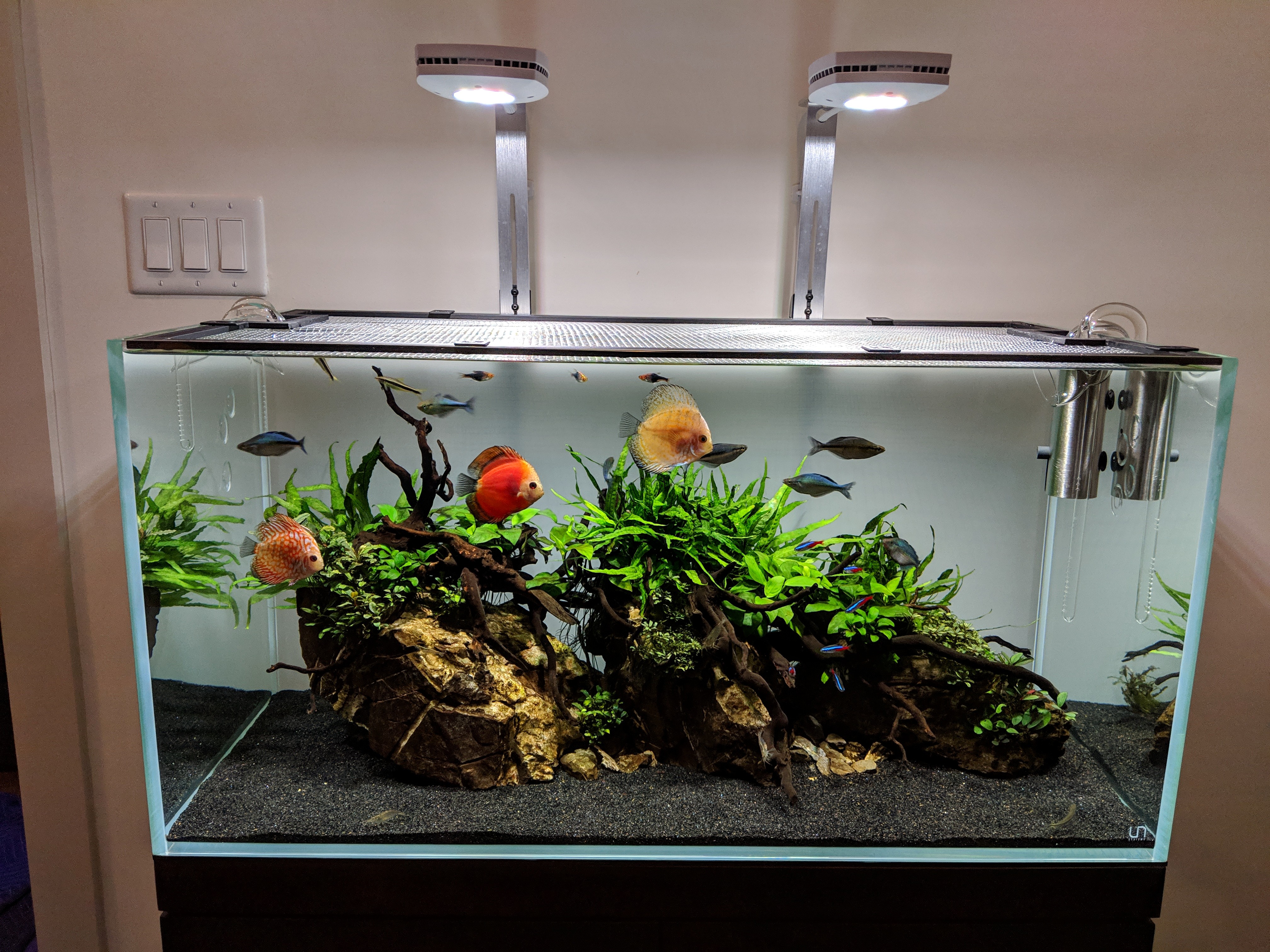 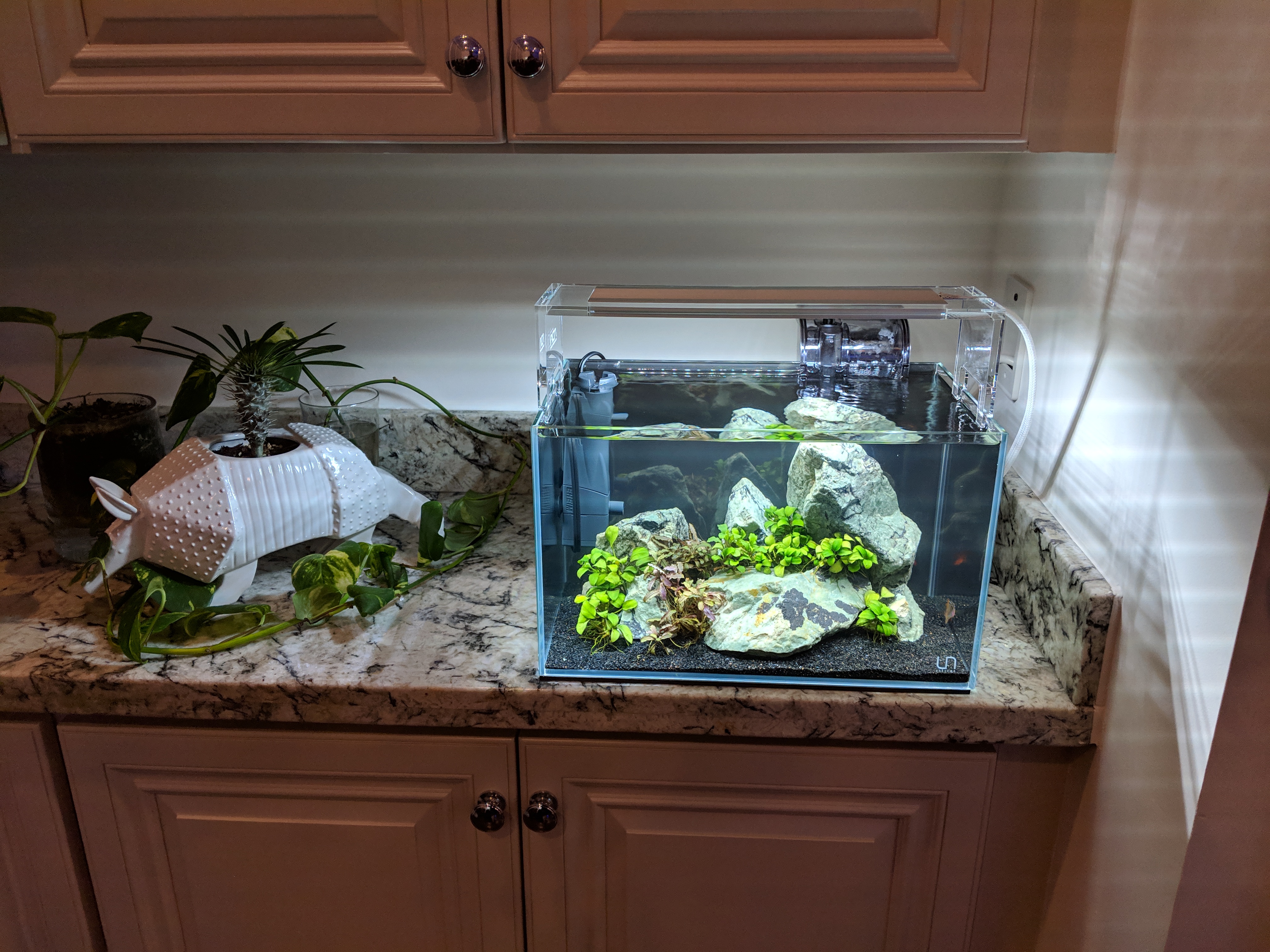 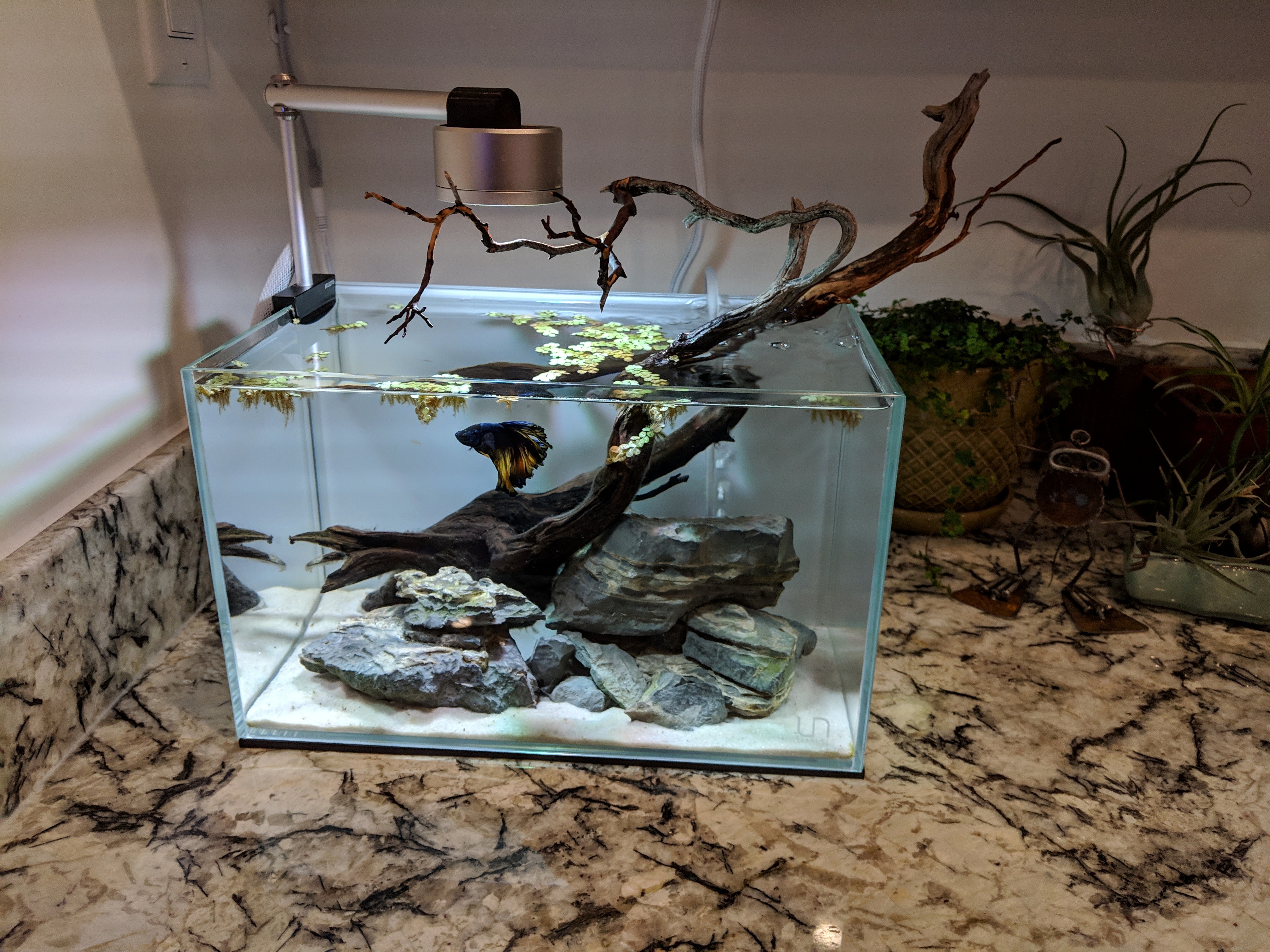