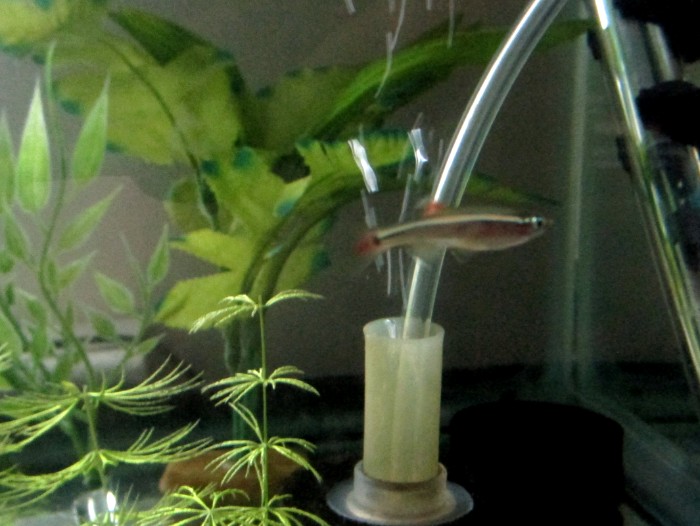 Here he's the one in foreground center, w/another fish just behind. Can see the jaw is mostly closed, and red. Think he'll be fine though. I've seen him eat. 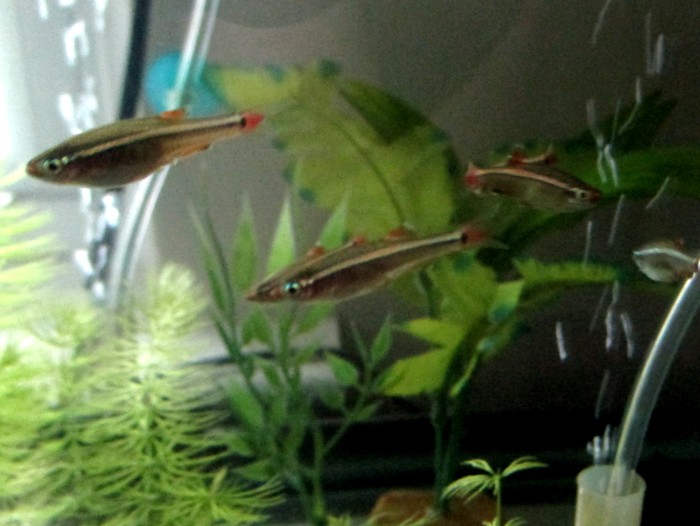 When I re-homed half the young minnows, a ton of subwassertang went with them- there's still enough left to keep the fishes feeling secure, though. It fluffs up and starts multiplying again pretty quick, it seems. I spread out the hornwort stems and dropped a few of the fake plants back in here for more cover. 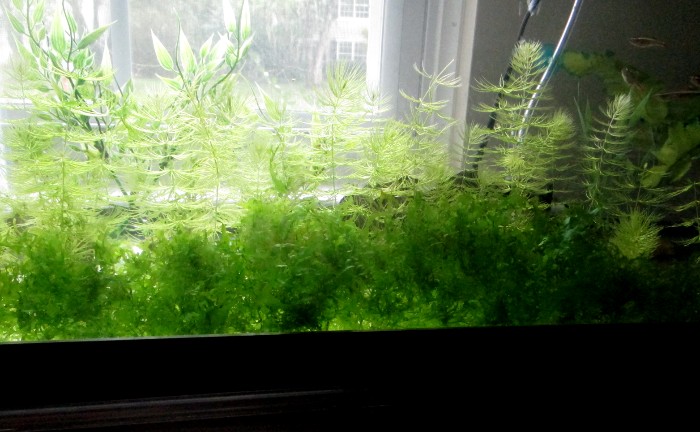 Short end of the growout tank. You can see I used ceramic rings to hold down the hornwort. It works. 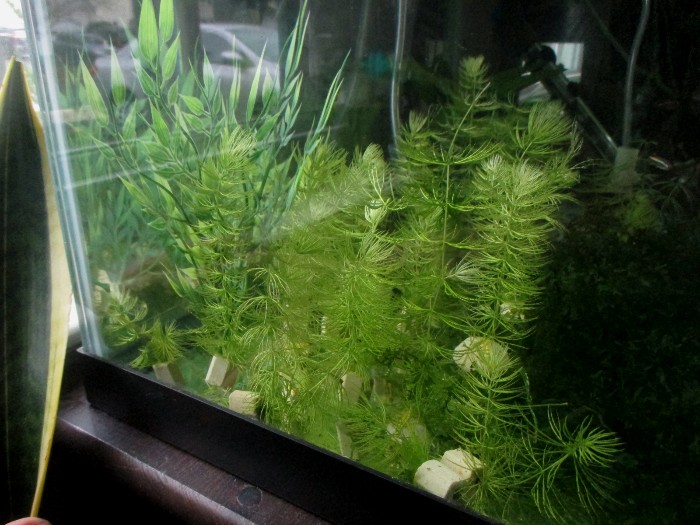 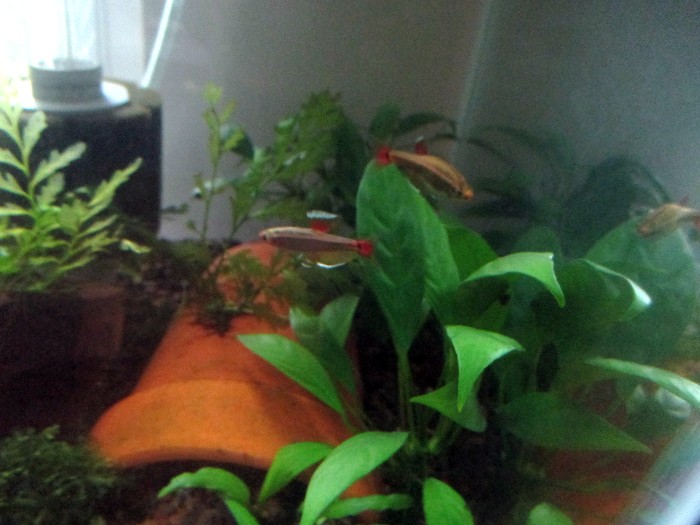 I moved the female guppies out. My trio of white clouds in here almost immediately started chasing, displaying, flaring, practically doing a jig in the corner. 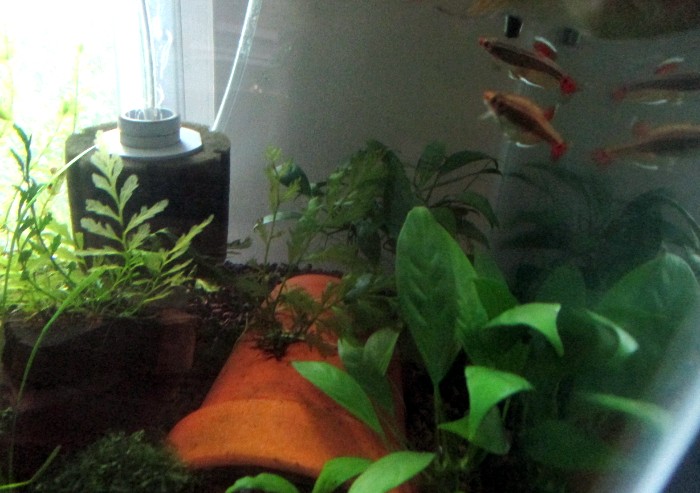 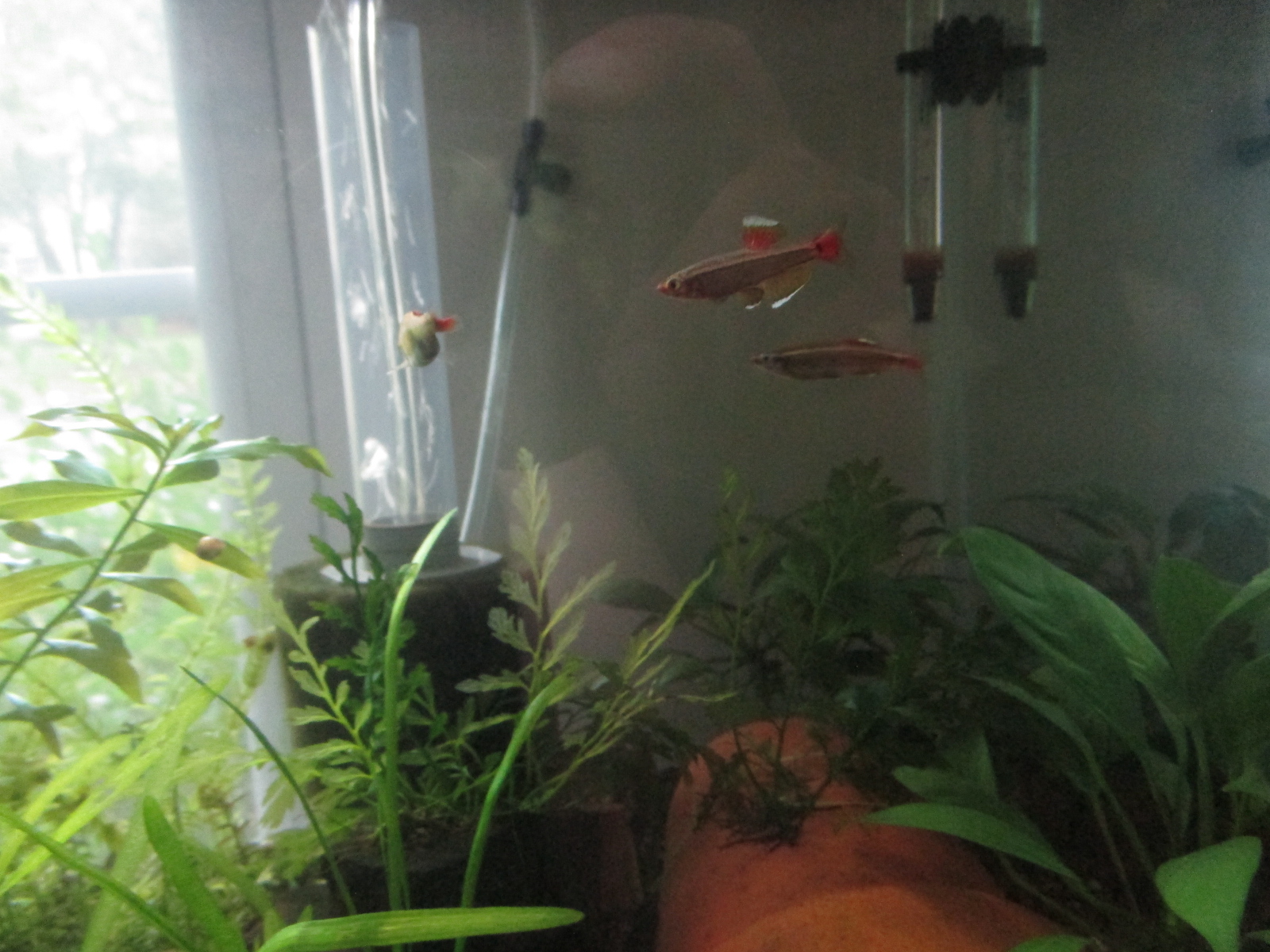 I am pretty sure they are getting ready to spawn again. I had always assumed they were not spawning because of Laddie- now it seems must have been the guppy presence inhibiting them. 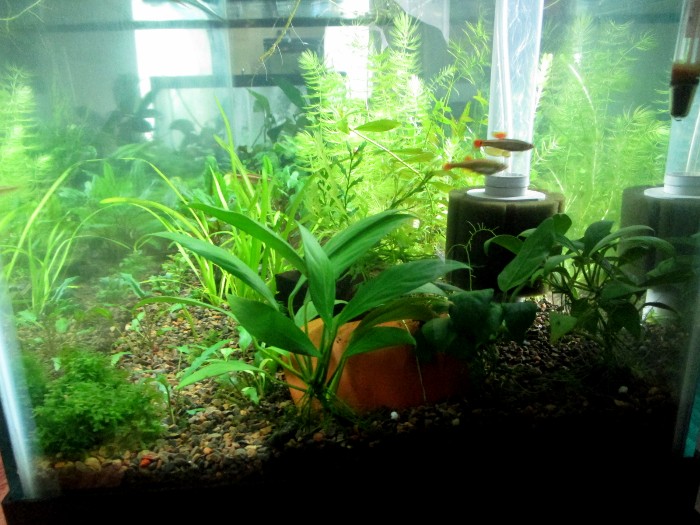 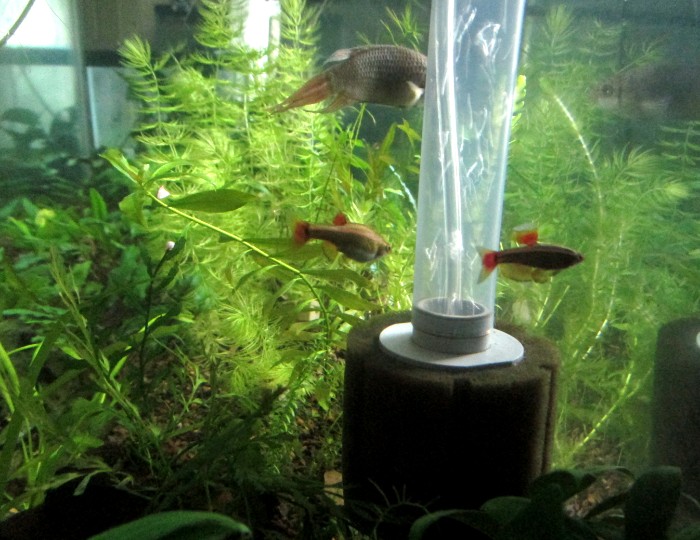 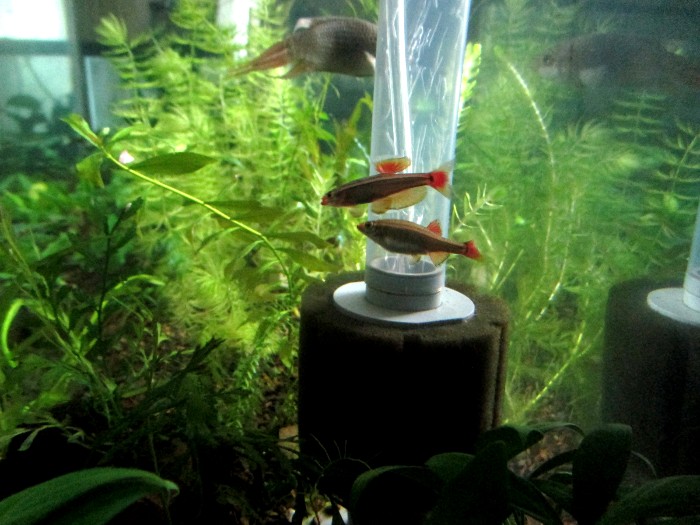 One of the males seems to have proved himself over the other, and I've been watching the female and this dominant male, vibrating their fins and quivering alongside each other. Once they did so while rising evenly through the water column together. The plump female puts on almost as much show as the male. Male and female, side by side: 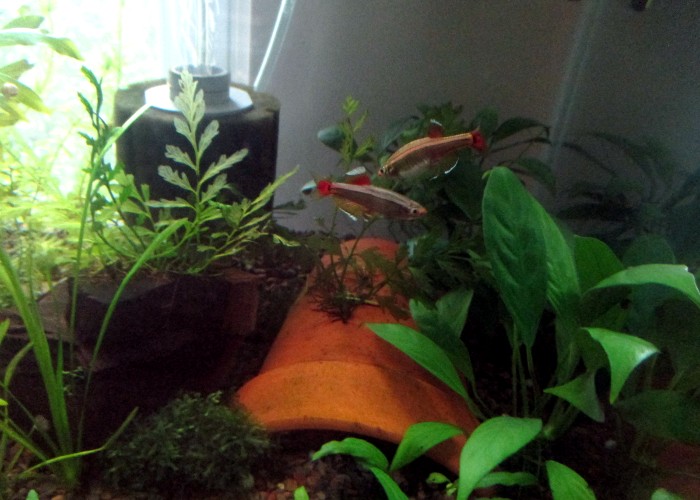 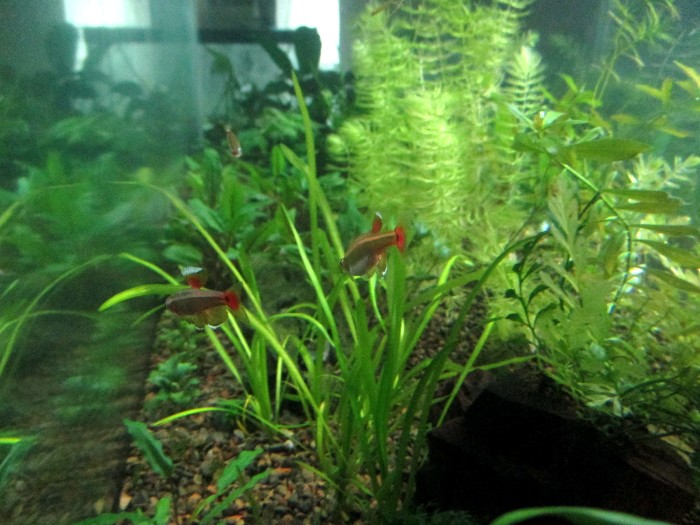 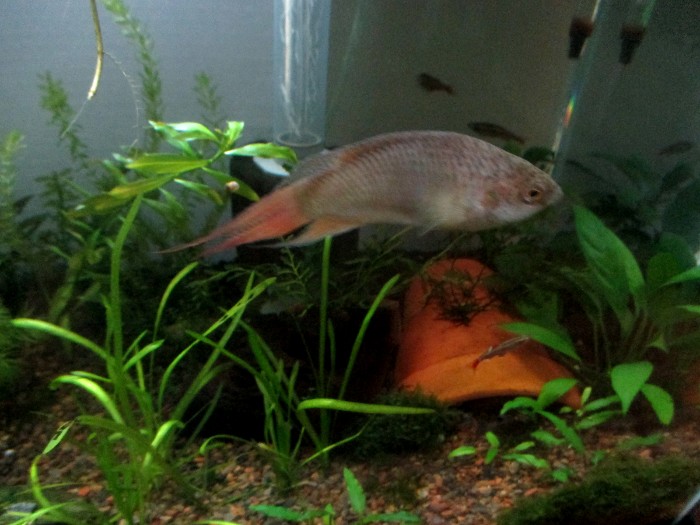 Is it still gill flukes? I don't know. Didn't see any flashing. And the other fishes in the tank are so active, flaring and dancing around each other in spawning mood. none of them look sick at all. On his last day I gave Laddie his favorite food- a red wiggler earthworm. He snapped it quick, but didn't color up with excitement like he used to, and right after went back to hanging still. Later in the day very unhappily I dug a hole under the hydrangea, and Laddie met a brick. With his head. This is my last picture of him. 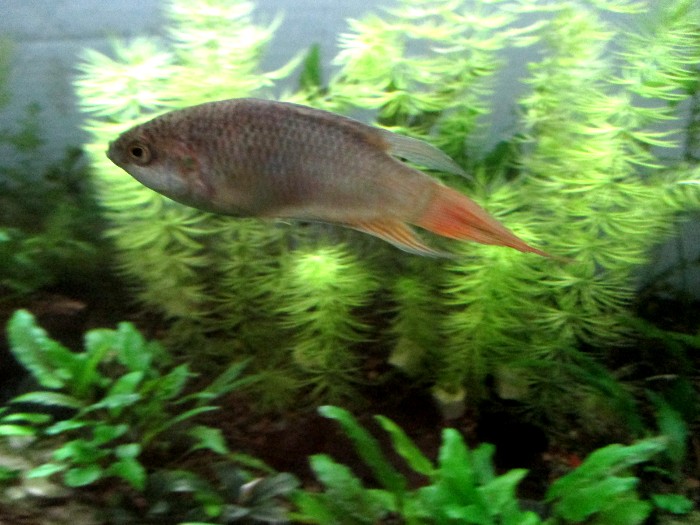 Then I moved all my young white clouds into the window tank. (Because I need the 20H tank space for the black skirt tetras- see my 45 journal.) Very lively in here now! Lots of displaying and chasing. The larger, orangish fish among them is the mother, and the one with brighter red on fins is one of the adult males. 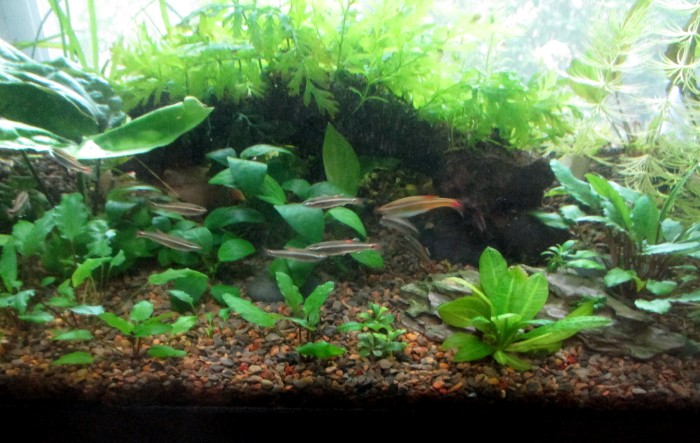 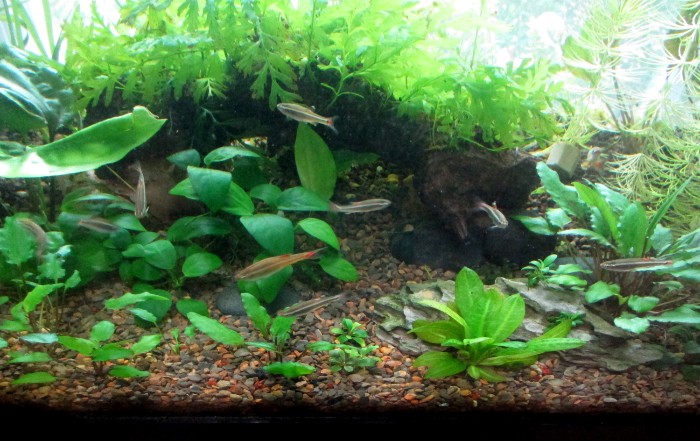 It's nice to see them so exuberant, but not the same as having a fish that seems to recognize you, drift over waggling fins and tail, eyeing you sideways through the glass expectantly. My smaller fishes pretty much only pay attention to each other. So I miss Laddie- and Perry before him- already. 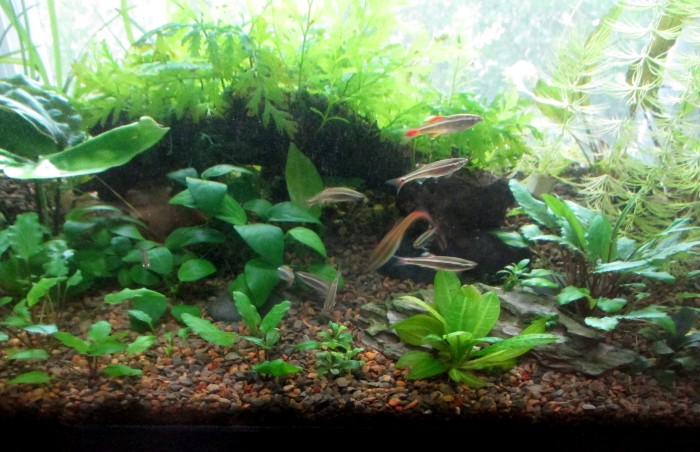