I made the tank out of 6mm glass, and it has those dimensions :
So here is how it started.

I used clear silicon to assemble the glass panels, that i ordered pre-cut, but that i sanded myself (cheaper this way).

As for the soil, i opted for what i understood as a standard for such shrimps : ADA Amazonia. It works well, but i'd opt for another option now (probably powder version, or something that doesn't bring the pH so low, but more on that later).


I used aproximately 3-4L of the ADA Amazonia, without trying to create any shape. The soil is mostly flat, with an uniform thickness. The reason for this was that i wanted to put the water in fast to start cycling it quickly, and that the plan was to use pieces of wood to break the "flatness" later on. So i dropped some plants from other tanks in to bring bacteria, some rocks, and a few strands of HC cuba from another tank (if i was to cycle for 2 months, i may as well get a headstart for the carpetting plants 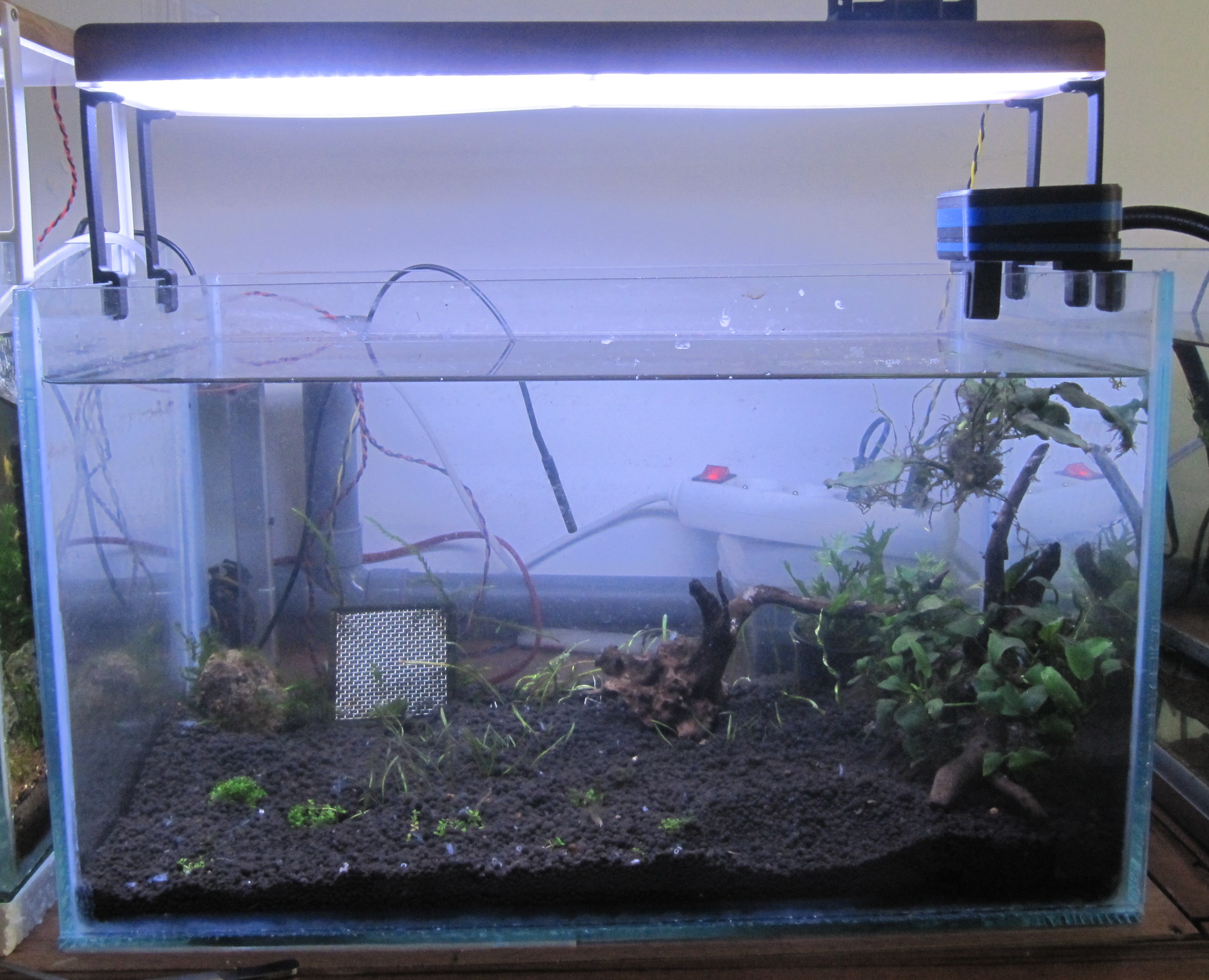 As you can see, it is pretty ugly at this point, but hopefully it will turn much better later on

However as a tank log, i don't want to hide the hideous phases, nor the mistakes. Indeed, a newcomer is more likely to learn from our mistakes than by seeing a perfect tank without knowing what work went on obtaining this result...
sky99
Last edited by sky99; 05-26-2018 at 05:52 AM. Reason: adding a better picture on top that represents the tank
sky99 is offline
Quote Quick Reply
post #2 of 4 (permalink) Old 05-24-2018, 01:06 PM Thread Starter
sky99
Algae Grower 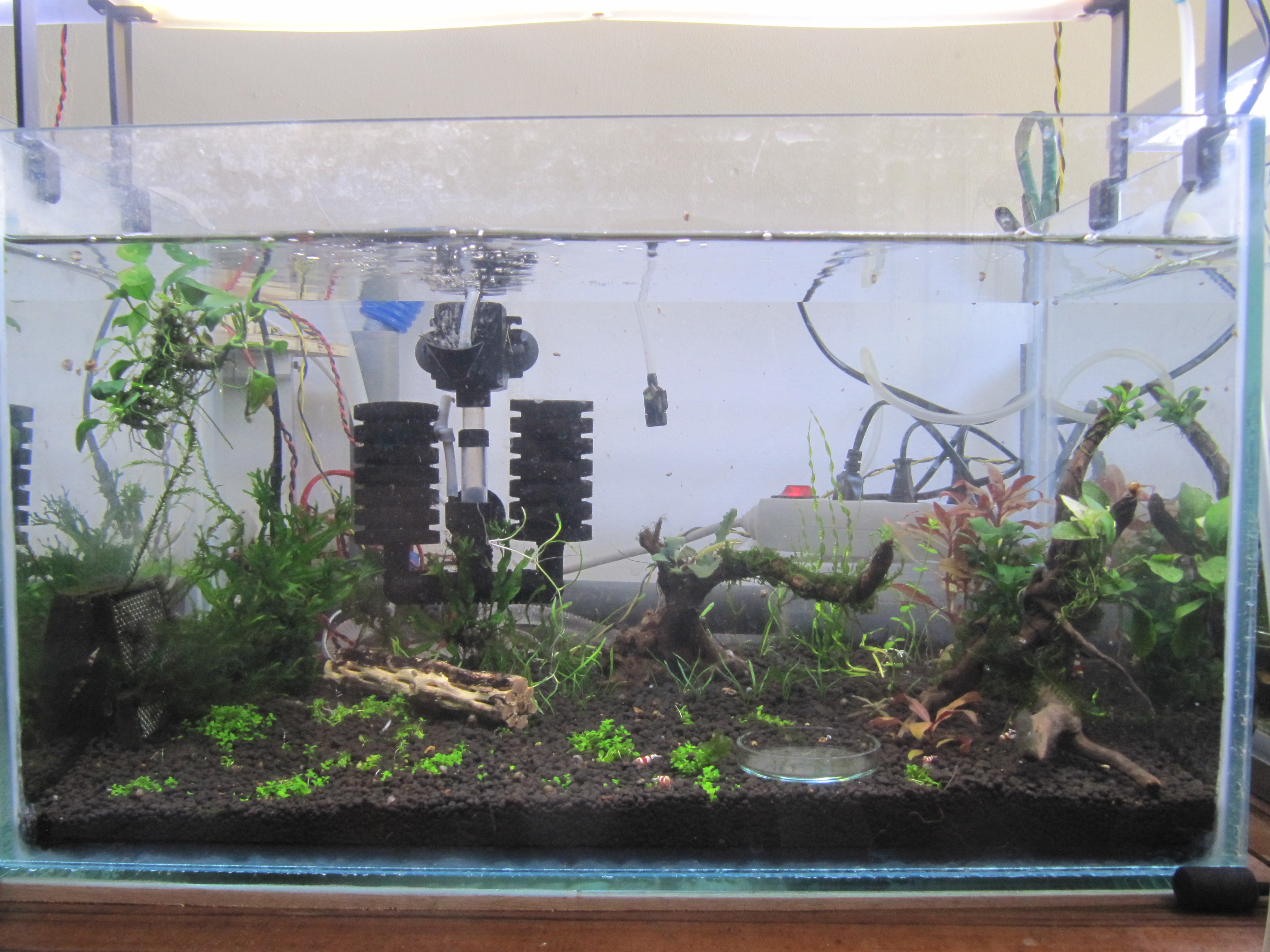 So in the foreground, HC cuba has spread a bit, and i added some more.
On the left is the ceramic plate with a stainless steel grid with quell moss on it.
Right behind it is a rock with Pellia on it, and behind i put a plant of Micosorum pretopus windelow (java fern, windelow variant, for it's compact look).
Another similar plant is just right of that, under the filter. A piece of holey wood (cactus wood) is just laying there too,not sure yet of what i'll do with it.
In front of the wood is the HC cuba, and just behind it i planted some Lilaeopsis brasiliensis; the wood serves as a separator to keep both carpetting plants from getting tangled together.

Right next to that, i put a spider wood with a moss i had no experience with : the flame moss. On the central "stub" of the wood, i attached a Bucephalandra sp. Red (also my first time witht bucephalandras, and i love those already), and on the overhanging branch, i attached some flame moss, hoping to get that vertical wall effect. At the exact end of the wood, i did add a piece of the smallest anubias i have ever seen : the anubias nana var pangolino. It's a bit expensive (~15 for a quite small plant), but if it grows well, it should provide a nice touch.

Right behind this wood, i planted some echinodorus vesuvius. I discovered this plant recently, and i LOVE it's look, so i'm giving it a try. As i have small tanks, it's would be perfect as background; and i'm tired of vallisnerias, so i'm trying something else.

In the background, on the right side, i planted a few strands of Alternanthera reineckii , to add a bit of color variety, but i'll see if they stay there. Just in front of those plants is another rock (lava rock) with pellia on it, and an anubias nana var petite on top.

It's important for me to have blocks of pellia, or moss in my shrimp tanks for the shrimplets, and there i don't have large chunks of moss (no java moss in this tank, because it spreads everywhere, and i don't want to mix it with the flame moss).

Right in front is another spider wood, this time with some cameroon moss (Plagiochilaceae sp.) on the base.
This moss is really different from all the other mosses i worked with, as it has more of a 2D structure : it grows in flat stems, with the leaves beeing left and right of it. Here is a picture of it i found online :

Upper on the wood is an Anubias bartreri nana var petite again (i love this anubias, and i have lots of it, i have very generous mother plant that i grew from a small bit for years), and right of this, another anubias i never had previously : the anubias bartreri nana var pinto. It has the exact same shape as the nana, but the leaves are light green and white, as seen on this picture from online : 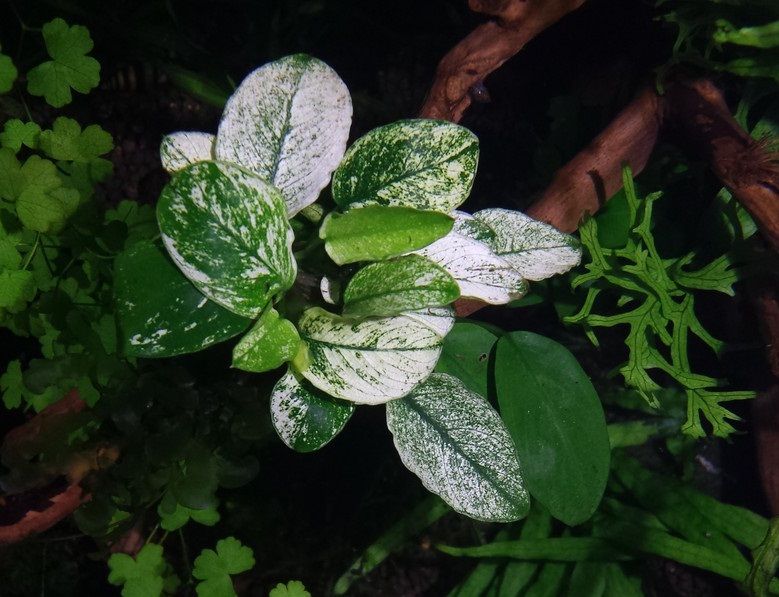 (i'll take specific pictures in closup from my plants later on)

Again, on top of the wood, i added another bit of anubias pangolino.

So this describes how i planted the tank when i introduced 13 caridina cantonensis "crystal red" PRL, on 03/03/2018.
See you in the next episode

The carpetting plants spread, i also added some more. I don't have CO2 (nor will i add it), so it's a slow process.
The alternanthera grew well, but appart from that everything is simply going on at a calm pace

good carpetting, and the "green wall" of flame moss is starting to show up.
The bucephalandra put out new leaves, so i'm happy to see it growing. Again, the alternanthera grew faster, it's reaching the surface now

You can see the bucephalandra gaining size, but mostly the flame moss starting to have the green wall effect i wanted.
The anubias pangolino grows really slooooowly, even slower than the anubias pinto.
You can see on the left a nimphoides "banana plant" that i tossed in this tank to add surface area for biofilm.
The picture above was taken on april 12, and at this point i had my first berried shrimps in this tank!
Still no death, all 13 shrimps are alive and well.

The flame moss tree after some growth

After some time again, the flame moss wall looks really nice!
this was on march, 04.
Then again one week later :

This time (march,13), not only the flame moss bush got thicker, but also the bucephalandra got new leaves!
And furthermore, there is a flower bud!
Will i have an underwater flower? time will tell!

If you have really good eyes, you can spot, on this picture, in the moss, one of my first caridina cantonensis shrimplets!
I'm really happy about that, because it's the first time that i manage to keep properly a crystal red colony! But provided that this time, i did everything by the book,
it's only natural i guess