(View User Tanks)
PTrader: (0/0%)
Join Date: Nov 2009
Location: Chicagoland
Posts: 41
I've read through your angelfish journey, and it is fascinating. Cichlids are by far the most interesting aquarium species, I think. I notice that throughout your various plant substitutions, you haven't added much height. My angelfish loved to "hide" in my jungle val, and it really did a lot to dissipate their aggression and skittishness. I wonder if you added some tall plants, if it would give them some relief?
CatsMeow is offline
Quote Quick Reply
post #138 of 185 (permalink) Old 05-13-2019, 04:58 PM Thread Starter
JJ09
Planted Tank Guru

(View User Tanks)
PTrader: (3/100%)
Join Date: Sep 2014
Location: Virginia, USA
Posts: 2,685
Quote:
Originally Posted by VioletAqua View Post
Very nice tank! What's that stringy stuff around your air line? I like the look of it.
Thanks. It's roots from the pothos stems I have stuck in the back of the tank lid.

(View User Tanks)
PTrader: (3/100%)
Join Date: Sep 2014
Location: Virginia, USA
Posts: 2,685
Yes, @babystarz. I have tried hornwort, amazon frogbit and red root floaters. All died. Right now I do have dwarf water lettuce- it revived from the shipping stress and adjustment of being in a different tank, but hasn't yet spread a lot or grown long roots. I really hope it will grow long roots just like yours.


(View User Tanks)
PTrader: (0/0%)
Join Date: Nov 2009
Location: Chicagoland
Posts: 41
Quote:
Originally Posted by JJ09 View Post
Well, I have tried- with vals, some narrow-leaved crypts, aponogeton capuroni, elodea stems. They have all died off to some degree, and never grew back to the height I was hoping for yet.
Interesting. Now that you mention it, I remember seeing some of your pics with val tied to wood. Have you tried planting them (and the crypts, etc.) in a substrate, with root tabs? My vals took off in just simple play sand with root tabs. I think they must be heavy root feeders (I've found that with swords too), and the root tabs really help give them a boost.


(View User Tanks)
PTrader: (0/0%)
Join Date: Nov 2009
Location: Chicagoland
Posts: 41
Oh, sorry - I missed that! I thought you were saying you had water lettuce that hadn't been doing well.

I saw this post, and thought you had val tied down as well as planted. 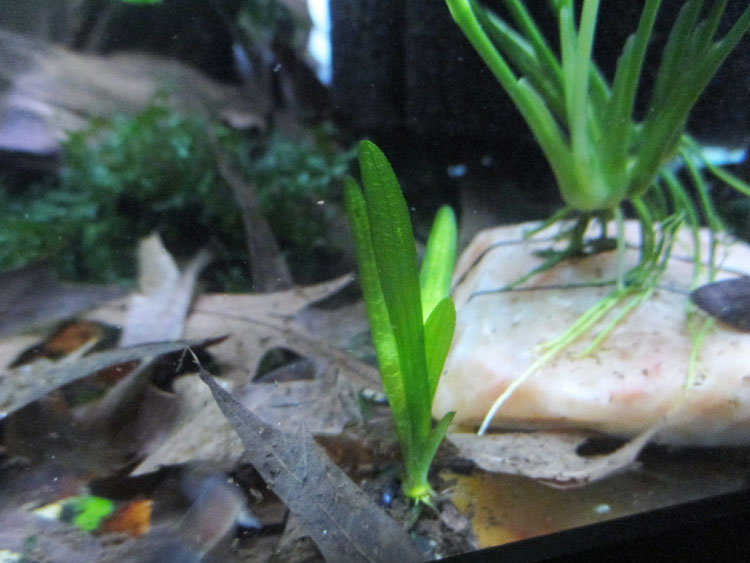 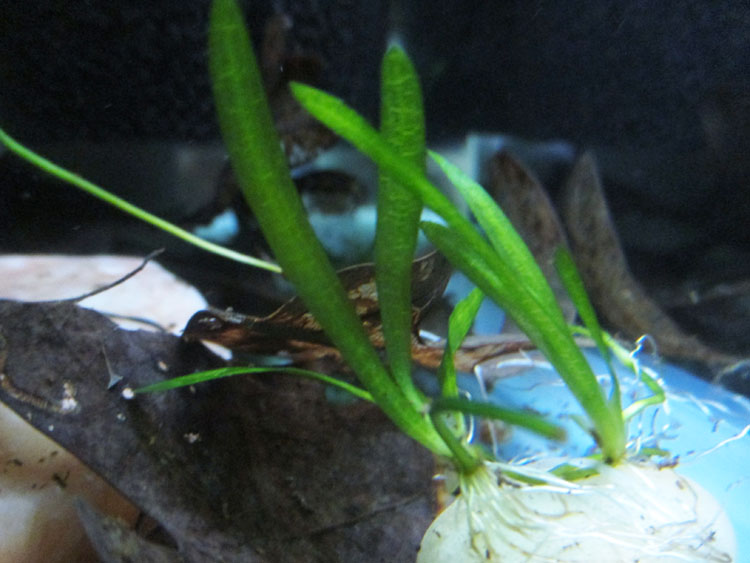 In any event, I'm loving your posts. My angels spawned a lot, but I never ended up with a successful brood. I'll live vicariously through your updates.
CatsMeow is offline
Quote Quick Reply
post #144 of 185 (permalink) Old 05-14-2019, 04:42 PM Thread Starter
JJ09
Planted Tank Guru

(View User Tanks)
PTrader: (3/100%)
Join Date: Sep 2014
Location: Virginia, USA
Posts: 2,685
Whoops- yeah, I did tie down a few vals like that once (I had forgotten). I've long since planted them in the basket. Now I've mostly got individual elodea tethered in that way.

My water lettuce is doing okay- it seems to be making a slow recovery/adjustment to my tank after I got it in a shipped package. It might just take it more time to grow out and spread.

(View User Tanks)
PTrader: (0/0%)
Join Date: Sep 2012
Location: Mpls, Minnesota
Posts: 318
Quote:
Originally Posted by JJ09 View Post
Yes, @babystarz. I have tried hornwort, amazon frogbit and red root floaters. All died. Right now I do have dwarf water lettuce- it revived from the shipping stress and adjustment of being in a different tank, but hasn't yet spread a lot or grown long roots. I really hope it will grow long roots just like yours.

Now I'm thinking I will anchor some of the elodea stems to braided fishing lines, up five or six inches off the bottom. It might look silly, but will give some plant height and if they continue growing, I can tie further down when they're taller, until they are sitting on the bottom again . . .
I have some tips for water lettuce! #1 is, if there's any surface movement in the tank I suggest creating a "corral" for the water lettuce out of airline tubing just above the water surface and suction cups (much like lap lanes are divided by floating lines in swimming pools). I like this because they can get whipped around when they're small which they don't like (they really don't like it when their leaves are submerged).

And #2, if you want the crazy long roots, make sure you are removing the smallest plants weekly when they start to crowd each other. By selecting out the smallest plants you're giving more nutrients to the bigger plants and you'll eventually end up with a few HUGE mother plants with tons of long roots and they will throw out their own little plantlets to create a floating island. I've had success with this method in 6+ tanks now.

I do find water lettuce to be quite forgiving compared to frogbit or red root floaters and they don't have huge lighting demands (mine have a cheap NICREW LED strip and are somewhat close to windows). So as long as you can keep the leaves above water they will really take off. If you ever need more just let me know, I'm throwing so much out weekly I'd just send a ton to you for the cost of shipping.

Also just FYI - there's no such thing as "dwarf" lettuce - all water lettuce has the potential to get huge and it's just sold under that name in the aquarium trade for some reason. So don't be surprised by how big the mother plants can get


(View User Tanks)
PTrader: (1/100%)
Join Date: May 2019
Location: Palm Springs, CA
Posts: 578
I know this is the plantedtank forum, but to keep your fish from being so skittish it might be worth putting in some tall plastic plants until yours grow taller, or you find some other plants that work in your tank. Just hate to read about them crashing into the walls like that.

As for quarantining dither fish, if you don't have an available extra tank, I've successfully kept hardy livebearers like guppies & mollies in a 5gal bucket with an airstone & a few floating plants for a few weeks while waiting for a tank to cycle. Floaters seem to need a lot of light, so some people keep them in a bucket or tub on the deck or patio in warm weather where they grow really quickly. You might need slowly move them into the shade to acclimate them so they don't melt when you put them in your tank. That might be a good way to get water lettuce with the really long roots you're looking for.

Love your idea of tying down the elodea with fishing line--let us know how that works for you. If you keep experimenting something's bound to work for you!
Desert Pupfish is offline
Quote Quick Reply
post #149 of 185 (permalink) Old 05-15-2019, 12:58 PM Thread Starter
JJ09
Planted Tank Guru

(View User Tanks)
PTrader: (3/100%)
Join Date: Sep 2014
Location: Virginia, USA
Posts: 2,685
Quote:
Originally Posted by Desert Pupfish View Post
I know this is the plantedtank forum . . .
My tallest plastic plant recently went into the tank.
The elodea stems keep coming loose from their anchors, and several are now floating. Probably because the bottom ends are melting as they adjust (I recently moved them in from a diff tank).

Yeah, I don't have a proper spare QT tank right now because my betta tank busted a seam a few weeks ago, and I had to move him into the empty 10g that was usually for QT/hospital use. I do have several clean 5gal buckets, and I have two plastic tubs- one holds 8 gal the other just under 5 gal, that I have used for QT in a pinch. Don't really like to, I can't see the fish well through the plastic sides which are only semi-translucent.

My tank used to be in a spot in basement hall where it was always very dark. It gets a ton of ambient light now, by comparison. The angelfish are actually doing much better now than when they were downstairs- they don't startle every time I walk near the tank like they used to. So there is some gradual improvement there, but I'm hoping for more.

I once had water lettuce in an outdoor container for the summer- it did great- but when I moved it in hoping to keep in one of my aquariums over winter, it never adjusted. Melted away. I'm afraid if I put some of my water lettuce outside to beef it up, that would happen again?


(View User Tanks)
PTrader: (1/100%)
Join Date: May 2019
Location: Palm Springs, CA
Posts: 578
Quote:
Originally Posted by JJ09 View Post
(Won't angelfish eat guppies? I think I'd need a dither fish bit larger)
In my experience they didn't bother the full grown adult guppies, but would eat the fry. That was my way of providing an in-house source of live food--it did a good job of getting them into spawning condition. I had one male & 2-3 female guppies so the male could divide his attention between his harem, and not hassle just one female. And the more females, the more fry to eat.

Mollies or platys would be larger livebearer options if your angels are especially large or are unusually aggressive predators.

Good luck with the elodea--hopefully i'll adjust so you can successfully tie it down. Did the branches you had initially help reduce their skittishness? If so, maybe some driftwood branches could help. You could tie on some of those anubias you grow so well.
Desert Pupfish is offline
Quote Quick Reply