(View User Tanks)
PTrader: (0/0%)
Join Date: Aug 2014
Location: Whitby, Ontario, Canada
Posts: 50
ADA Mini M
My previous scape with this tank (no journal) was somewhat neglected due to life and work and ended up getting a bad case of algae and I wanted to try something new. So I transferred the RCS and betta to another tank and began the task of rebuilding.

I'm usually a fan of the "jungle" or "nature aquarium" look and like using driftwood, but this time I wanted to try something a little different. I've had some Kei stone just sitting around for quite some time and figured I'd grab a few rocks and give it a try. The goal was to have something nice to look at but clean and easy to maintain as I already have another tank (60p) and one more to setup (90p) - and time is an issue.

The tank is growing well and quite easy to take care of. I'm quite surprised by the lack of algae but I'm still running CO2 somewhat high, doesn't seem to bother my daughter's betta "Nip". The betta is loving the glosso - he roots around in it looking for the occasional piece of food that he has missed during feeding time.

A few updated pics - tank is in need of a trim. It seems to need a trim every 2-3 weeks! Only dosing potassium at the moment. I've got dry ferts but using Seachem Potassium ~1-2 ml every other day. 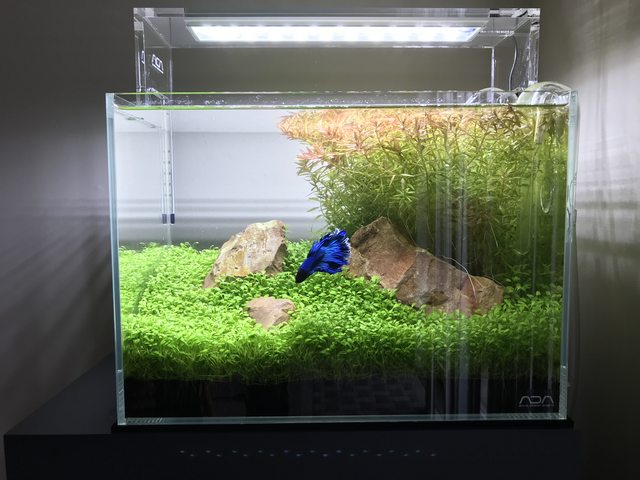 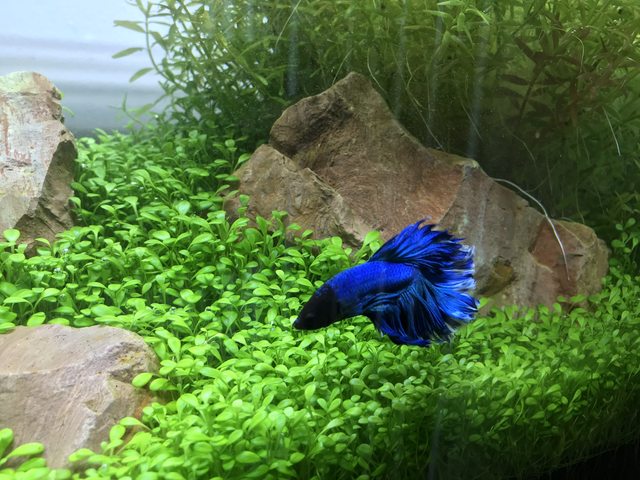 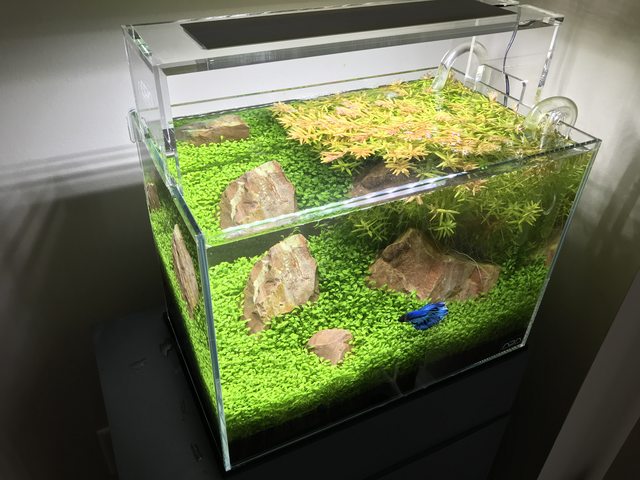 This has to be the fastest carpet I've ever grown and everything is looking extremely healthy. I swear this atomizer is working better than my ADA diffuser that I was previously using. Seeing my first signs of minor GSA, which I just cleaned after today's 50% water change (to keep ammonia down). 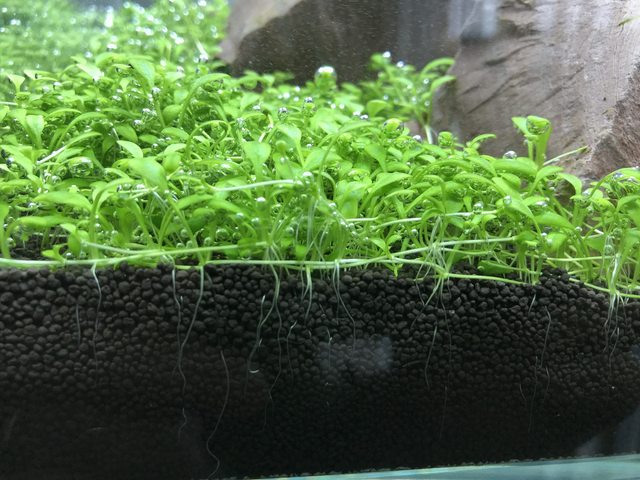 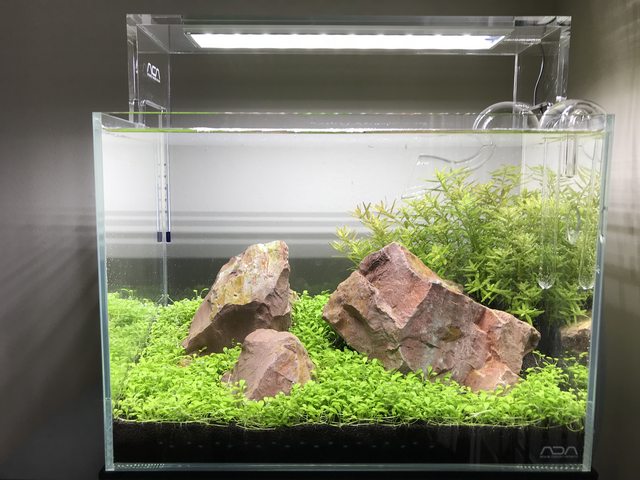 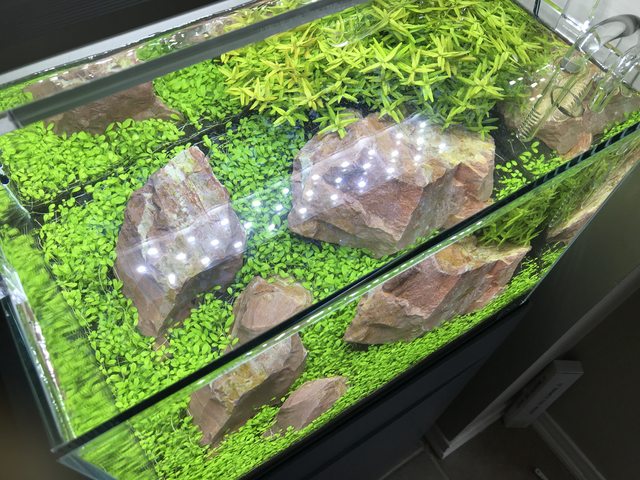 Initially, I was going to do the dry start method: 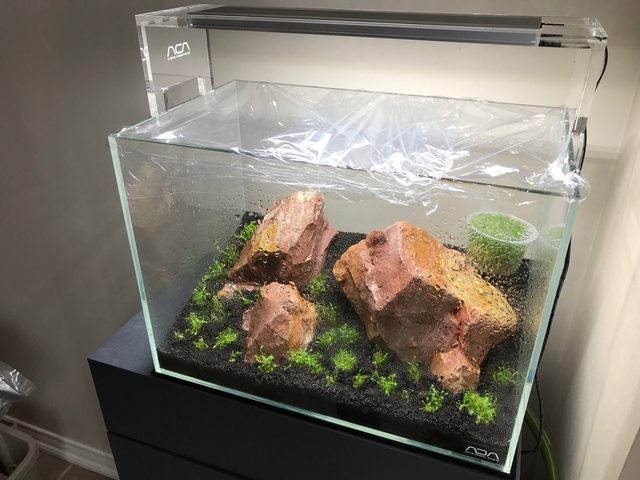 But because I was concerned about having my betta in the other tank, I decided to flood it and get the cycling going. With the CO2 cranked and the lights set for 9 hrs things have really started to move along: 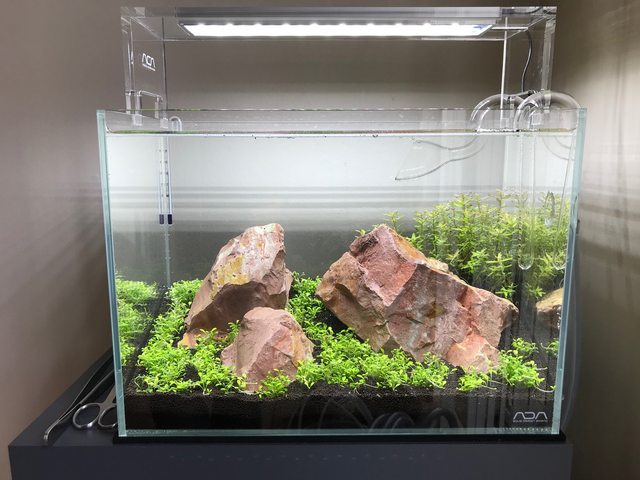 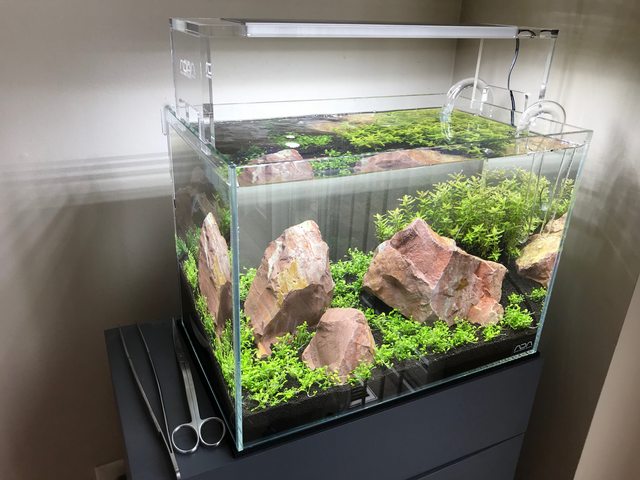 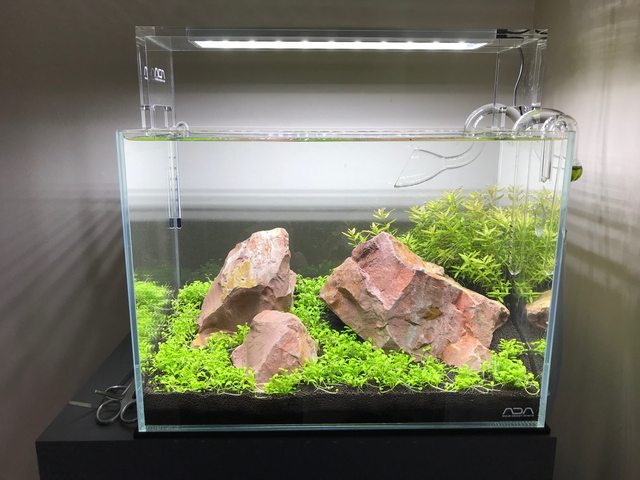 Will be adding some Rotala H'ra, once it arrives, to add a bit of colour. 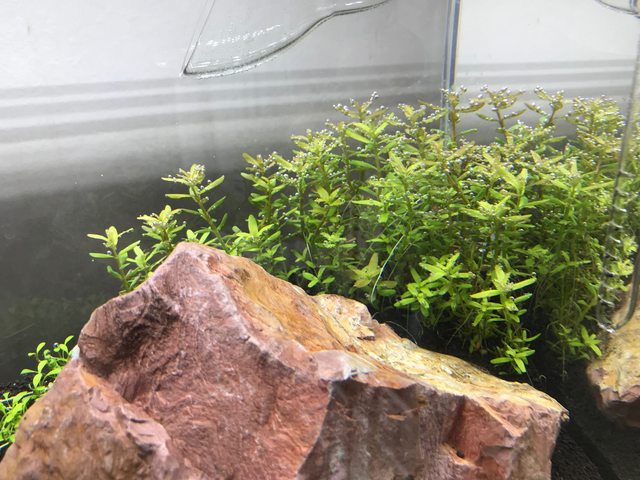 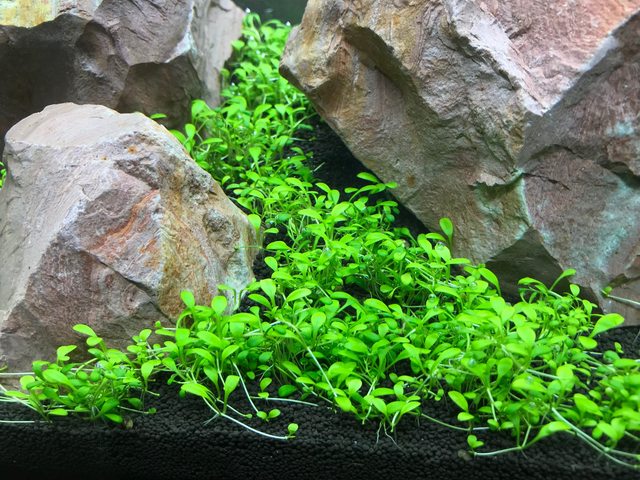 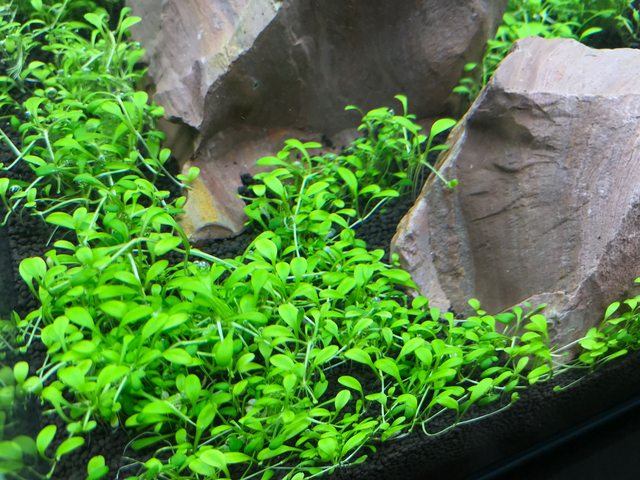 Ammonia levels are starting to come down slightly but I think it's going to be a couple more weeks before it cycles. So far no signs of algae.
I know this isn't a traditional iwagumi-style tank and it was never intended to be - but I think the simple layout of the rocks works...at least for me.

Side note: This is the original concept that I started with but decided against the wood this time around. It is more visually interesting (especially once you add moss, etc) but it would have made maintenance of the glosso a nightmare. Went through this last time with Monte Carlo and driftwood in this tank and it was tough to maneuver the scissors to trim the carpet effectively. 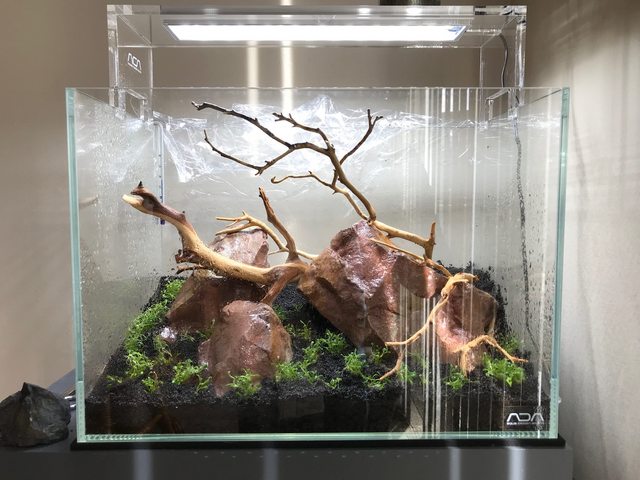 This is the old setup: 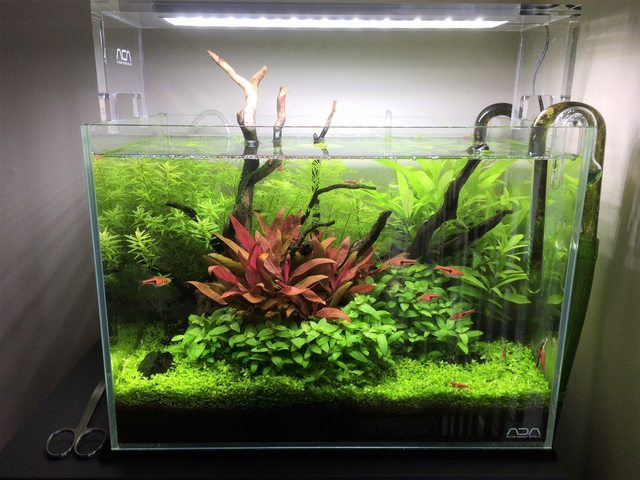 Sent from my SM-N950U using Tapatalk
Thanks! Honestly, if you're doing a carpet I'd seriously consider it. Marsilea Crenata seems to work alright in low-light and I've had success with a small tank of Monte Carlo but it takes *forever* without CO2. It's a bit more of a pain dialling everything in (light+CO2+ferts) but the grow is worth it. It depends on how big the tank is too. That Rotala has grown about 6" in 2 weeks and from past experience it'll become a weekly maintenance chore in a tank this small to keep it looking neat and trimmed.

Bump: BTW if anyone has a glosso carpet, what is the best way to trim it and when? This is about two weeks of growth since planting and the roots are starting to look fairly established. I don't want to let it get too long...I'm assuming you can pretty much trim it like MC and just take off the tops?
Digitalfiend is offline
Quote Quick Reply
post #4 of 4 (permalink) Old 04-08-2018, 05:14 AM Thread Starter
Digitalfiend
Algae Grower


(View User Tanks)
PTrader: (0/0%)
Join Date: Aug 2014
Location: Whitby, Ontario, Canada
Posts: 50
Just a few updated pics. The Rotala H'ra that I ordered didn't survive the shipment - I didn't get a shipping notice so it got left in the mailbox over the weekend and we had a cold snap (-10c) that week. Will have to order some later.

(sorry for the glare) 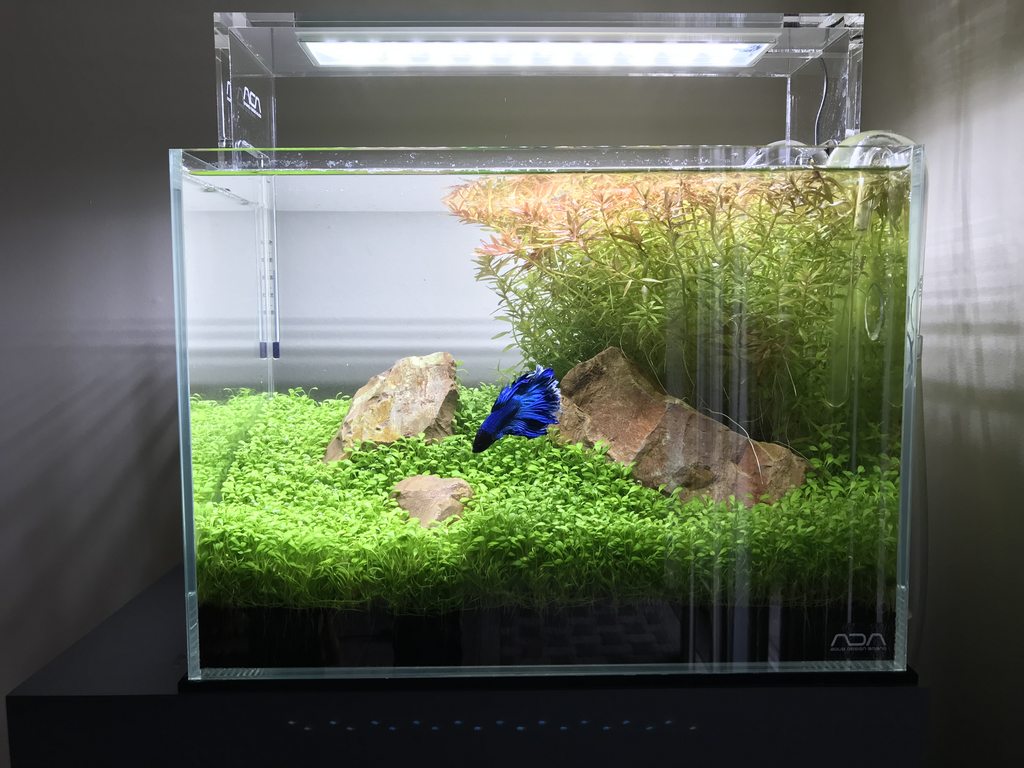 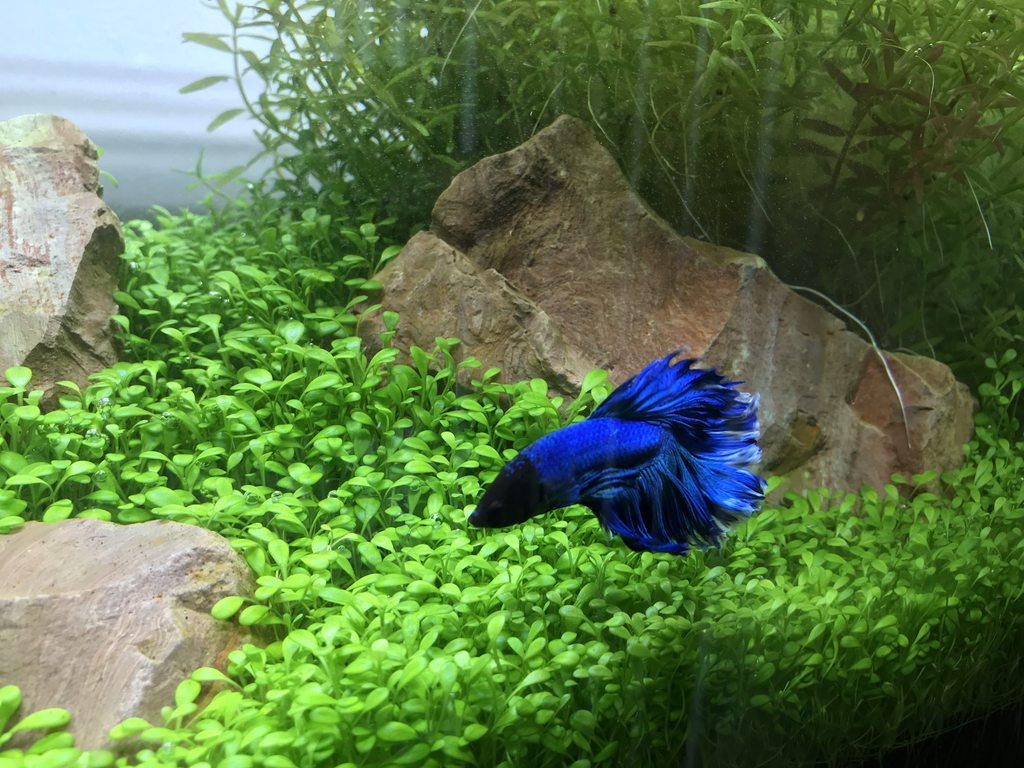 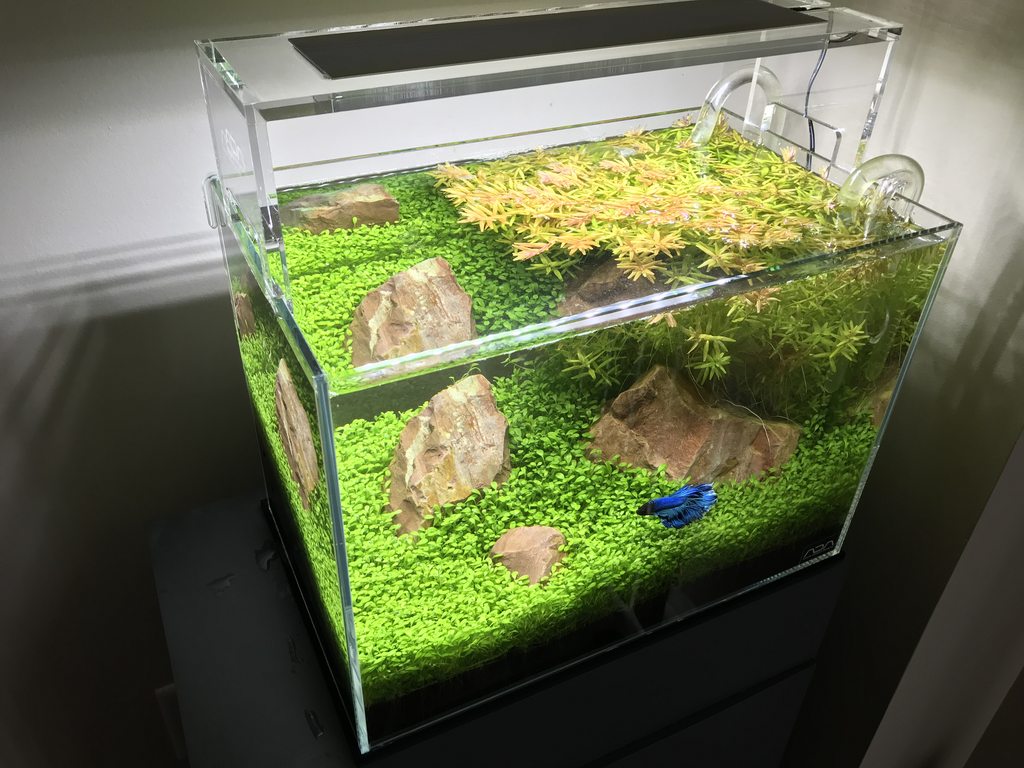 Botia dude, Botia dude, ScrubbyDick and 1 others like this.
Digitalfiend is offline
Quote Quick Reply