(View User Tanks)
PTrader: (1/100%)
Join Date: Jan 2006
Location: St. Louis
Posts: 209
Upsizing to a 55
Finally upsizing my tank. Ive had a 20gal for a long time. Christmas gift as a kid and still kicking. Ive been saying for years I want a bigger tank and finally made it happen. Pulled the trigger in January and bought a 55gal during a $1/gal sale.

I have all the equipment, which has been accumulating in my front entryway for a month. The stand I bought came in last weekend. Mfg'd by Coastal Aquarium Design. Really happy with it. Better than some of the cheaper stands most places carry. Had to so some calling to find a LFS that could get me something besides the basic pine stand. Also wanted something with the bottom closed to conceal my equipment. My 20gal is on metal stand with an open bottom and the canister is an eyesore in my opinion. I digress

Painted the back of the tank black a couple of weeks ago with a flat latex paint and a foam roller. Lesson learned there in patience, taking your time, and paying attention to what youre doing. I pulled some of the paint off by accident when removing tape not the in the process of removing the tape I had put around the edges, but when lengths of tape I had already removed brushed the freshly painted area because I wasnt paying attention, and when I tried to pull the tape, the painted background came off with it. It was my first time painting a tank, so lesson definitely learned!

Going to try this weekend to rinse the flourite. Not looking forward to it. 6 bags. Plan is to use the paint strainer method. Flirted with the idea of just dumping it in the tank, adding just enough water to wet everything, and let it settle before adding more water. Convinced myself Id just be frustrated so settled on the paint strainer method. If all goes well, I might even get the tank filled with water! Driftwood has been soaking since 2/25 and still wants to float. Going to break out my canner and camp stove this weekend and boil the driftwood and nip that in the bud. Pic of the driftwood doesn't do the large piece justice.

Fish: Plan on some community fish, most likely a nice school of neons and who knows what else. Open to suggestions.

(View User Tanks)
PTrader: (0/0%)
Join Date: Jul 2015
Location: Naperville, Illinois
Posts: 1,617
I have praecox rainbows in my 55g, they are awesome fish, and stay fairly small, maxing at around 2-2.5 inches
A 17-year old that faces parental opposition in this hobby

(View User Tanks)
PTrader: (1/100%)
Join Date: Jan 2006
Location: St. Louis
Posts: 209
Quote:
Originally Posted by Shan4404 View Post
Congrats! I started with 55 got a 125 and had to get a 220. Get ready for more!
Hahah. I actually wanted something bigger but the thought of reinforcing my floors was a little more than I wanted to deal with at this point so I went the safer route with a smaller tank. Only place I have for it in my house is a wall that runs parallel with the floor joists. Someday though. Someday.
shamrock62081 is offline
Quote Quick Reply
post #6 of 119 (permalink) Old 03-04-2017, 09:21 PM Thread Starter
shamrock62081
Planted Member

(View User Tanks)
PTrader: (1/100%)
Join Date: Jan 2006
Location: St. Louis
Posts: 209
Driftwood is processing... Washed the flourite. Six bags took me about 30 minutes using a paint strainer. Way easier than I thought. Tank is 3/4 full. Will wait to top it off until I get the driftwood in it, probably tomorrow. I want to let it soak in the tub again after I'm done boiling it. I did have that nervous moment before I turned my python on where I hoped that there were no leaks. Even new tanks can leak, or so I've heard. All clear so far. And the water is pretty clear, so must have done a decent job rinsing the flourite.
clownplanted and clownplanted like this.
shamrock62081 is offline
Quote Quick Reply
post #7 of 119 (permalink) Old 03-05-2017, 11:44 PM Thread Starter
shamrock62081
Planted Member

(View User Tanks)
PTrader: (1/100%)
Join Date: Jan 2006
Location: St. Louis
Posts: 209
Up and running. Took me all afternoon. The green tubing wanted to do its own thing. Had to cut down the spray bar too. Have a very fizzy water column right now. Hoping that clears up. Tank is a little cooler and is still releases gases from the tap. If the fizz doesn't clear the GLA atomic inline diffuser may have to go. Suggestions for tweaking it? I feel increasing the bps isn't going to help my cause, but it's probably inevitable given how blue the drop checker is turning. Running at 30psi and 0.75bps right now. I can see how everything is flowing though. No driftwood. Still wants to float. May continue to soak it for another week. I'm ok with that as tannins continue to leach into the water.

Did pay a visit to a LFS today. Completely disappointed in plant selection. Compiling my list of wtb for a posting in the near future.
shamrock62081 is offline
Quote Quick Reply
post #8 of 119 (permalink) Old 03-05-2017, 11:47 PM
Mattb126
Planted Tank Obsessed

(View User Tanks)
PTrader: (1/100%)
Join Date: Jan 2006
Location: St. Louis
Posts: 209
Most of the fizz seems to have cleared. Still getting a fine mist out of the spray bar from the atomic diffuser. We'll see how that progresses. Drop checker is green, though not sure it's as green as it needs to be. Turned up the bps and now currently 2.16bps. This bare tank is unsettling. Need to light a fire under my rear and get moving on scaping.
shamrock62081 is offline
Quote Quick Reply
post #10 of 119 (permalink) Old 03-07-2017, 01:28 AM Thread Starter
shamrock62081
Planted Member

(View User Tanks)
PTrader: (1/100%)
Join Date: Jan 2006
Location: St. Louis
Posts: 209
The big piece of driftwood sank so in the tank it went. It's much bigger than I though. Had tested it out in an empty tank in the store where I bought it. What's everyone think? I have a much much smaller piece I am going to put on the right, but it still floats. Plan is to attach some buce (ordered!) to the large piece. Maybe some mini christmas moss I have ordered as well, or put that on the smaller piece of driftwood. Still not sure about the haze the mist is giving.
shamrock62081 is offline
Quote Quick Reply
post #11 of 119 (permalink) Old 03-07-2017, 11:39 AM
Mattb126
Planted Tank Obsessed

I think in a 55, it's best to shoot for something like this. 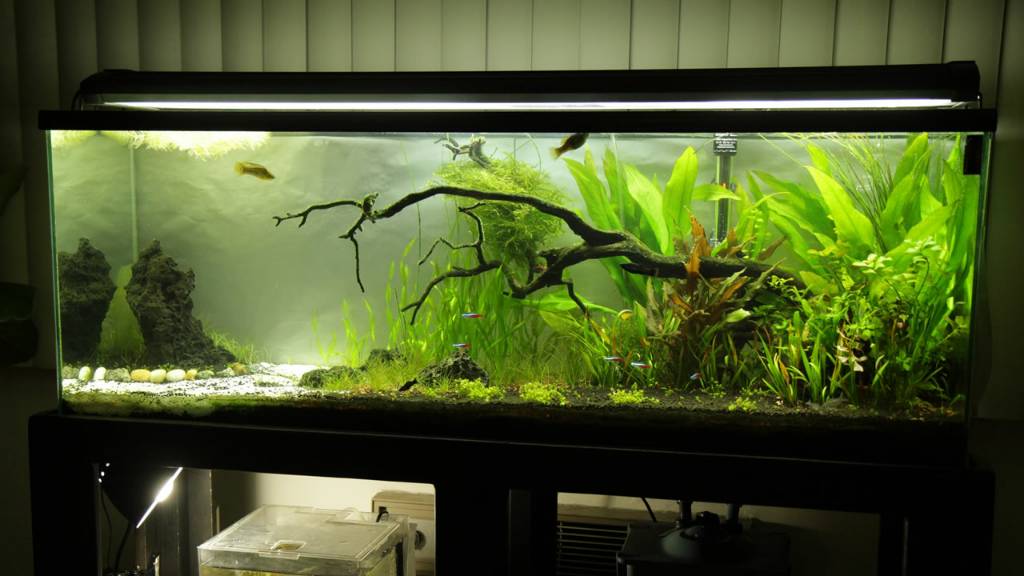 (View User Tanks)
PTrader: (1/100%)
Join Date: Jan 2006
Location: St. Louis
Posts: 209
Agreed Mattb. If I'm not happy with it now, that doesn't bode well for my long term opinion. I'm going to make due with it for now, but agree that it's probably not a long term fixture. It is really cool piece of driftwood though in my opinion.

Quote:
Originally Posted by Mattb126 View Post
I think you won't be happy with it in the long run, it's to flat and isn't very interesting to look at.

I think in a 55, it's best to shoot for something like this.

(View User Tanks)
PTrader: (24/100%)
Join Date: Apr 2011
Location: Tucson, AZ
Posts: 1,932
I would guess you just need to add another piece of driftwood or two. While it is difficult to get a decent hardscape to show depth in a 55, it is definitely doable.
To view links or images in signatures your post count must be 10 or greater. You currently have 0 posts.

(View User Tanks)
PTrader: (1/100%)
Join Date: Jan 2006
Location: St. Louis
Posts: 209
I'm going to leave the driftwood for now until I find a suitable replacement. Being the sentimental person I am, I might try finding a more branchy piece of wood out on my parent's farm next time I'm there. Some small pieces I have for the right side of the tank still want to float, so I still have them soaking. Working on planting. Few plants came in the mail yesterday, hopefully will get some more today. I have a feeling once I get a nice planting that the tank will start to look better. Definitely noticed how shallow the 55 is from front to back when I started planting. Already thinking about what I'll do differently when I get a bigger tank!!!
shamrock62081 is offline
Quote Quick Reply
post #15 of 119 (permalink) Old 03-11-2017, 02:53 AM Thread Starter
shamrock62081
Planted Member

Also bought a pack of cheap bulbs. It's supposed to have a green nymphaea, a couple aponogeton ulvaceus, and some water onion. I figured I had a lot of red/pink plants and didn't have enough green, so why not. Still need to plant the rotala butterfly and anubias. The rotala butterly is going to go about where it is sitting right now, the anubias is still TBD. Thinking about attaching it to the driftwood that hadn't made it into the tank yet.

I am not so confident about my scaping abilities. We'll see when things start growing out. Have some buce on the way to add to the driftwood. The piece of driftwood I have to go on the right is still in a bucket in the basement because it wants to float. Might have to try and boil it again this weekend. We'll see how the dwarf baby tears do. Actually we'll see how all of it does. Will probably kill it all.

Tank just has a cloudy haze to it. Hopefully its just trying to find balance. Once it's a little more established I'll get some fish. Will probably add some nerites and amano shrimp after a week or so. I haven't attempted any sort of effort to officially cycle. May just swap some tank water from my 20 gallon when I do my water change this weekend.
johnson18, johnson18, BettaBettas and 1 others like this.
shamrock62081 is offline
Quote Quick Reply