(View User Tanks)
PTrader: (0/0%)
Join Date: Aug 2008
Location: san diego
Posts: 348
The 240 Gets some TLC
Its been almost two years since ive invested much time into my 240, just went super low tech and let the java ferns take over, left CO2 empty out about a year and a half ago and have been doing no fertilizer other than daily heavy flake and algae wafers. It has been quite full but i just ripped out a full trashbag of over a foot tall mega bunches of thin leaf java fern that i have had growing for almost a decade through many different systems and did a large water change/filter clean (i really did not even clean the FX6 in over 9 months!)

I have about 100lbs of Dragon stone that i will be placing into the system over time, i'm planning to do two mounded corner islands with sand in between, probably iwagumi style or large wood overhanging open space in between.

For the time being i am going to loosen up the gravel, plant root ferts throughout and plant full carpet pygmy chain swords (looking for bulk source) and bacopa monnieri/caroliniana in large bunches and add 3-4 tiger lotus bulbs on right side until i can get a full day to take everything out and fully redesign the substrate.

I am getting in a group of 100 cardinal tetras tomorrow to add to my massive fat 3-4yr old set of 16 survivers from initial stocking, alongside 22 XL rummynose, two 8-10' clown loaches, 3 5-6' SAE's, 3 large adult bushynose plecos and two remaining Corydoras. I would love to put in 500 CRS shrimp, but i have to wait till my old timer (8-9 years old) clown loaches expire.

This is where we sit after cleaning all filters, recharging two purigen bags and 40% RO refill. CO2 will get filled tomorrow and get dialed back in.

Stay tuned for updates, as i have vowed to make it wow again.
Willcooper, Willcooper, d33pVI and 9 others like this.
Xirxes is offline
Quote Quick Reply
post #2 of 20 (permalink) Old 03-05-2017, 04:22 AM Thread Starter
Xirxes
Planted Tank Obsessed

Co2 is hooked up and pumping away, i have things dialed in at 4-5 dKH and 6.8 pH, Green drop checker.

I rushed in a 100 lot of cardinal tetras that my fish guy certified as good to go and im pretty sure that collumnaris made it into my system. I lost ~18 of the original 100 new cardinals, ive lost ~4 of my big old fatty cardinals and now two rummynose to White lips and/or white band across the tail. I am not willing to dose system with anything but paragard, but i do run a contant 25 watt UV filter 24/7 on this system, so i just shunted some more flow to the UV and hopefully that will get a grip on it.

I have high Nitrates (~50-60ppm) at this point, but my PO4, K, Fe, Nitrite and ammonia are spot on. I also have a metric S#!T-ton of leaf waste organic debris tied up in the massive java ferns after years of no removal. I just got done draining my third 40% water change, spot addressing this buildup. Im hopeful for 25-30ppm No3 and far less Collumnaris come tomorrow evening, when myu RO system gets done filling the system up (75GPD takes a day to fill 75 gallons!).

Did heavy trimmings of Java fern and replanting the new plants that got torn up in the process. Will look like a new tank in 2 days!

(View User Tanks)
PTrader: (12/100%)
Join Date: Jan 2015
Location: Tavares, FL
Posts: 2,966
First off, amazing tank size to work with. Terribly sad to see you're having issues with the new stock though. Those nitrates are way up! Are you dosing nitrates at all? Seems to be very high for what you have in the tank and the RO water. I'll be waiting for those updated pictures to see how things turn out.
To view links or images in signatures your post count must be 10 or greater. You currently have 0 posts.
Freemananana is offline
Quote Quick Reply
post #4 of 20 (permalink) Old 03-06-2017, 03:42 PM
klibs
Planted Tank Guru

(View User Tanks)
PTrader: (29/100%)
Join Date: May 2014
Location: NH
Posts: 3,325
this is almost exactly the setup I am considering when I get a huge tank. super low tech, tons of ferns. tons of schoolig fish, some loaches, etc... i love it
To view links or images in signatures your post count must be 10 or greater. You currently have 0 posts.


To view links or images in signatures your post count must be 10 or greater. You currently have 0 posts.
klibs is offline
Quote Quick Reply
post #5 of 20 (permalink) Old 03-07-2017, 02:08 AM Thread Starter
Xirxes
Planted Tank Obsessed

(View User Tanks)
PTrader: (0/0%)
Join Date: Aug 2008
Location: san diego
Posts: 348
The 240 Gets some TLC
So you may hear how my 3 year old "Loves climbing on sticks" in the above video... well she is balancing on the driftwood I just picked up for a future addition. It will just barely fit, but it will be glorious. This is only two pieces! 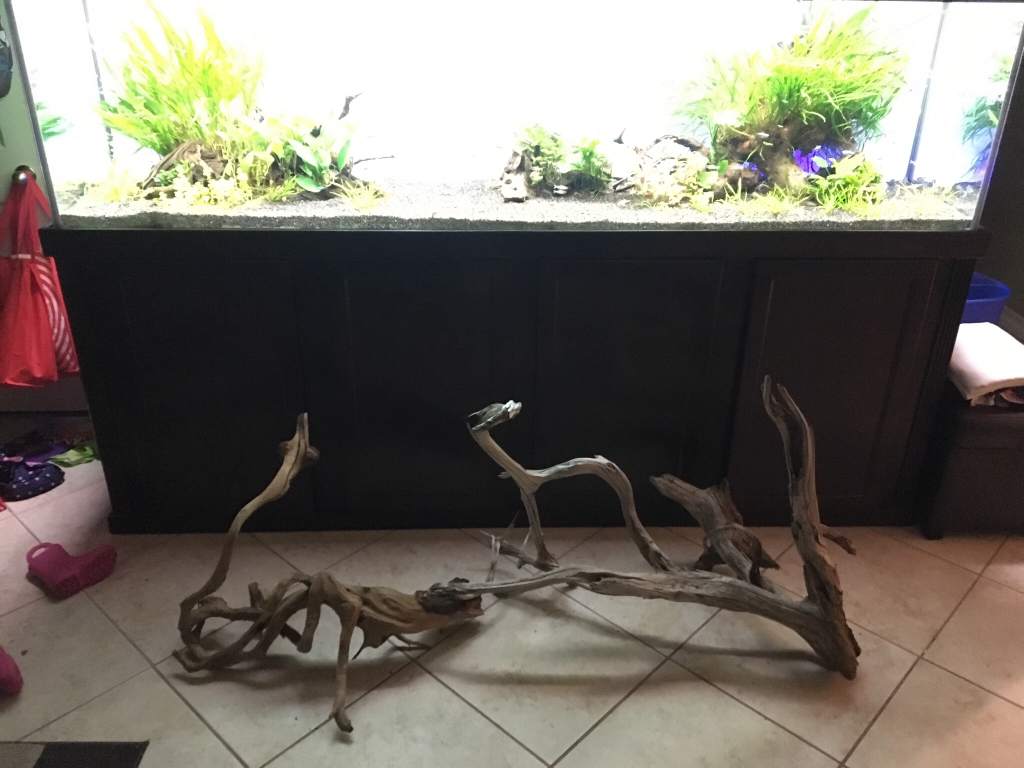 Ive just purchased another test kit to confirm no3 accuracy, but I have put in about 10-12 grow power tablets quartered into the substrate, while constantly working up/vacuuming out a full years worth of java fern leaf debris. 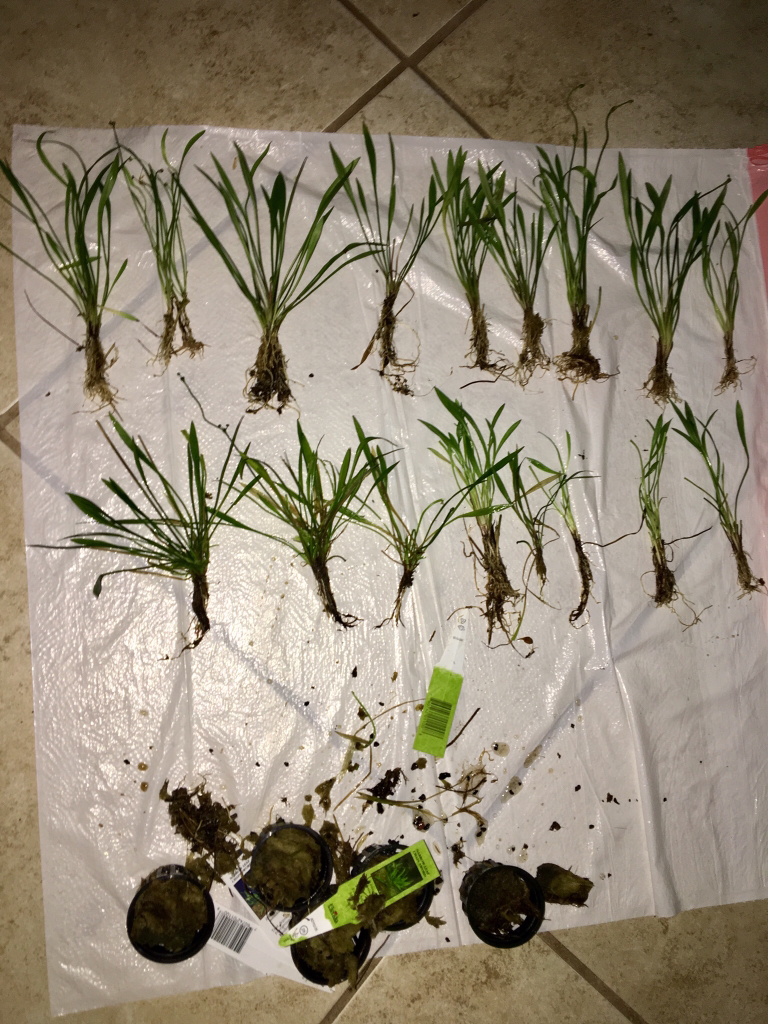 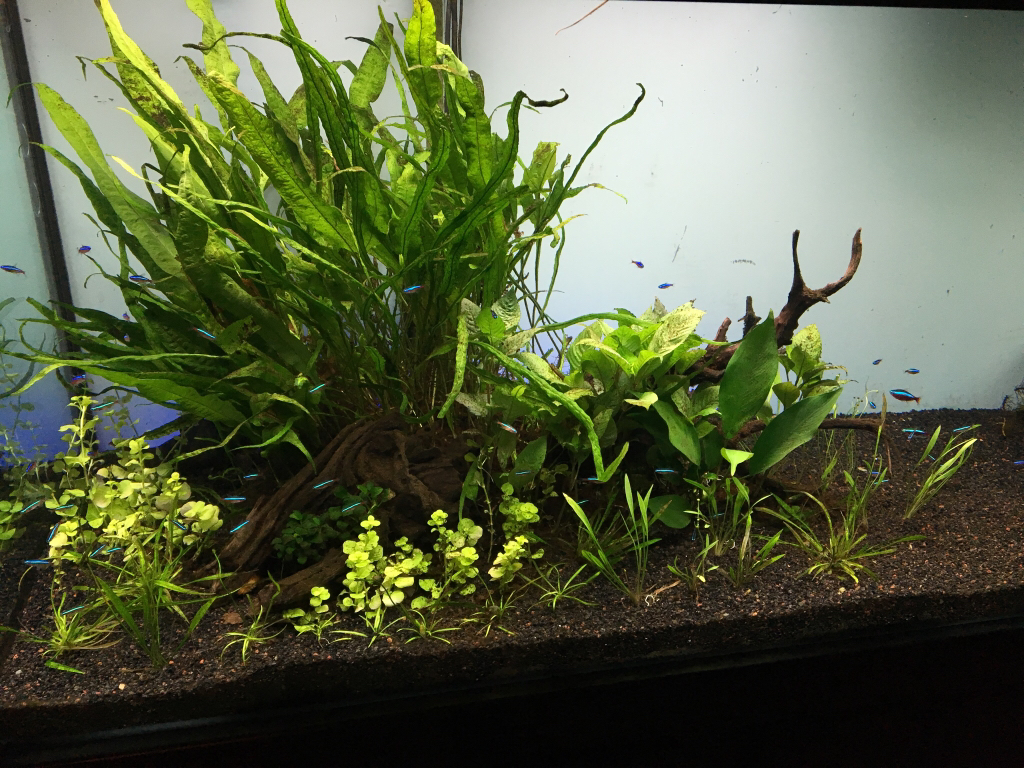 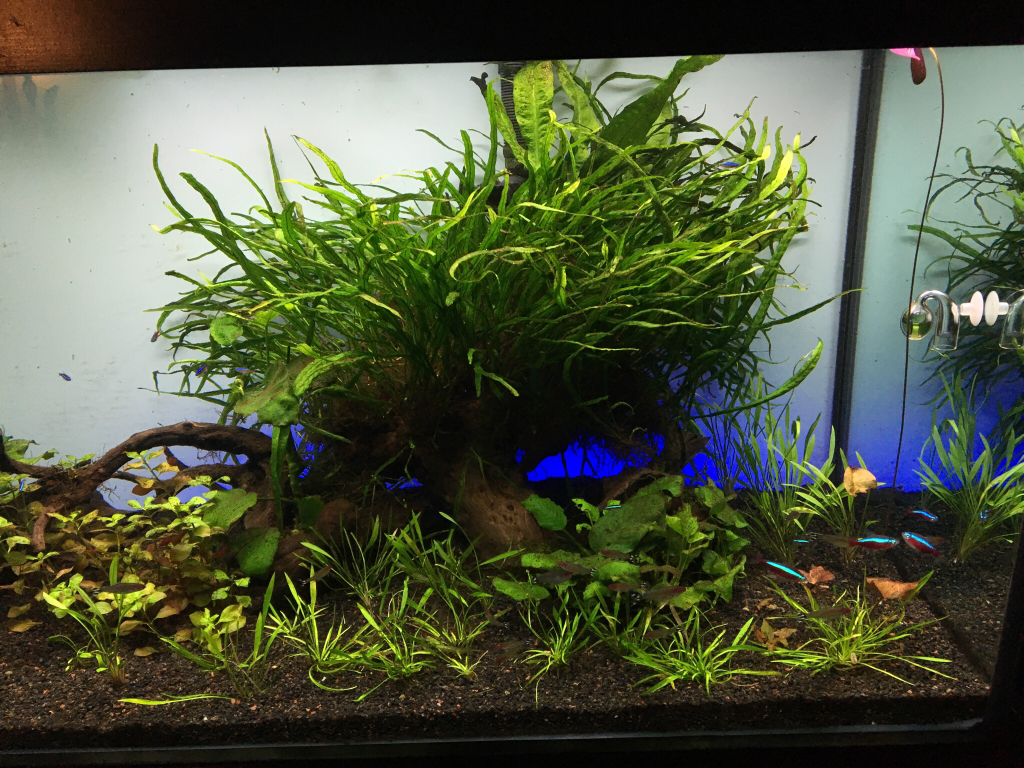 Here is a shot down the full 8 feet just after mucking around in there. This clarity is what makes me doubt 50ppm nitrate. 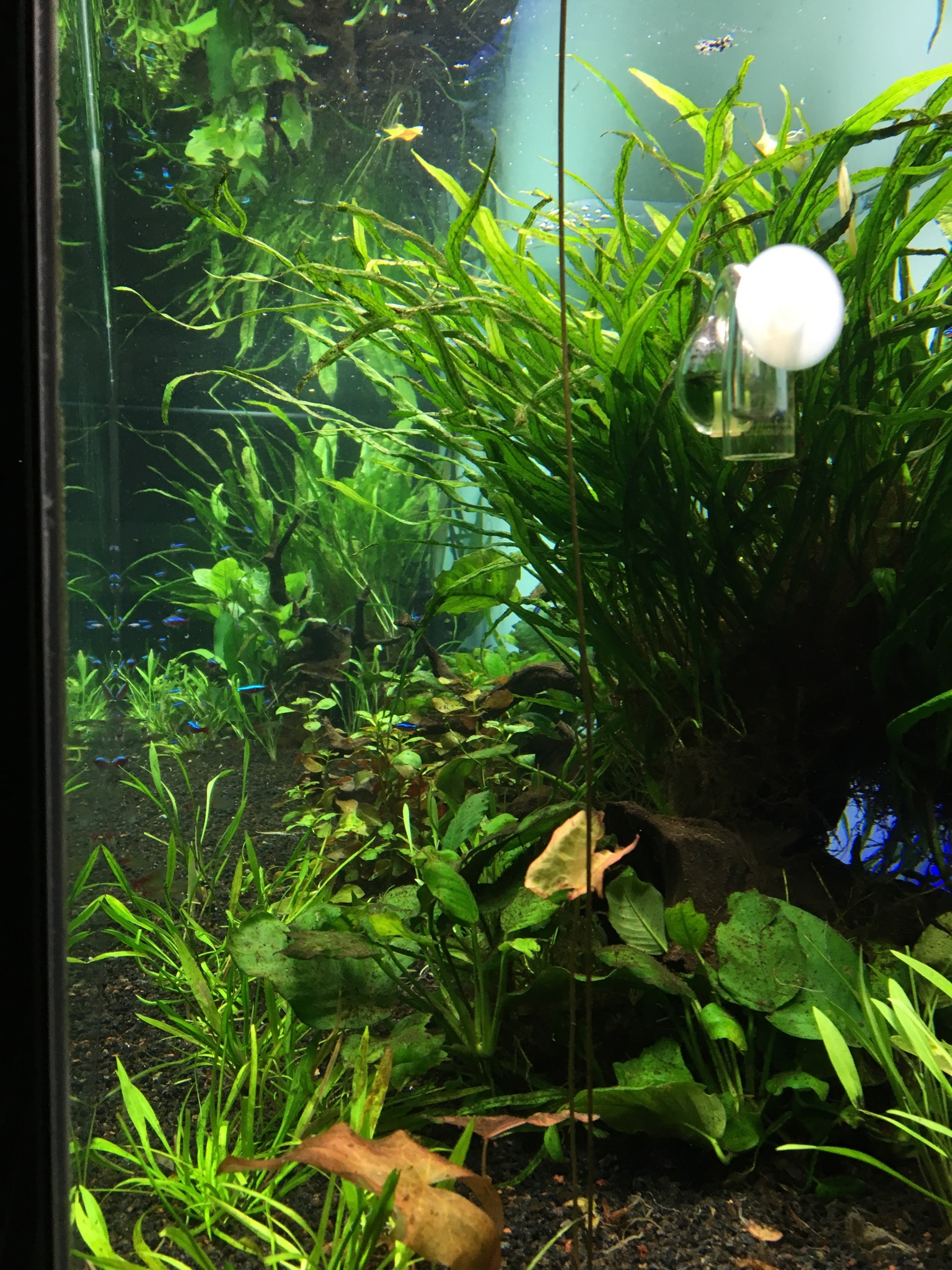 I will probably leave it alone for a full week before 40% WC and another filter clean.

Lowered CO2 to check tomorrow PM to hone in on 6.8pH sweet spot.

I can watch this all day!


(View User Tanks)
PTrader: (0/0%)
Join Date: Oct 2016
Posts: 376
Looking like a good reboot! May I suggest moving anything that will get tall like the stems and lily behind the wood? That'll give the swords lots of room to fill in the front, middle and sides which will emphasize the more powerful wood structures.

Regards,
Phil
To view links or images in signatures your post count must be 10 or greater. You currently have 0 posts.


To view links or images in signatures your post count must be 10 or greater. You currently have 0 posts.
PEdwards is offline
Quote Quick Reply
post #10 of 20 (permalink) Old 03-08-2017, 03:13 PM Thread Starter
Xirxes
Planted Tank Obsessed

(View User Tanks)
PTrader: (0/0%)
Join Date: Aug 2008
Location: san diego
Posts: 348
Quote:
Originally Posted by PEdwards View Post
Looking like a good reboot! May I suggest moving anything that will get tall like the stems and lily behind the wood? That'll give the swords lots of room to fill in the front, middle and sides which will emphasize the more powerful wood structures.

I tend to keep those stems cut low and dense, rather than taller, or I absolutely would keep them behind the wood. I only have the two bacopas right now, and the hygrophylia.

I'm hoping to fill all of the open area with tenellius over time.

This is as low as I can go while remaining running. ~70% WC.
Love the top view while it's filling too!

First thing is that the salifert No3 kit arrived, and I have confirmed between the two test kits 25-30ppm AFTER the 70% WC.
I'm definitely not adding any No3, at this point, but I will monitor every other day to make sure I'm not spiking before WC next Sunday.

Second goodie arrived....a Powerhead! I had a little debate going over in equipment subforum between Jeboa pp8 and pp15 controllable powerheads, and I decided to go with the pp15, because 8 feet right???

Well here's the video, taken on LOWEST constant setting. (I have since switched to running the flow directly against back wall, much better for the front swimming fish and plants)

It will be good to be able to crank up before a WC/ Filter clean, but a pp8 would definitely have been a better choice. The GPH is highly under-reported on available literature. More like 1200 gph at lowest setting

That said, I am super happy with the amount of crap that this pump stirs up and keeps in suspension now that was just sitting everywhere before. The smallest fish are not having a tough time swimming and the visual full 8' circulation has to be better for the system.

Now to watch for how the new surface flow affects CO2!

The one two punch of new fish carrying pestilence and kicking up all the old leaf debris/overfertilization from root tabs lead to an outbreak of ich tankwide. Saddest part is that I lost one of our two 9 year old clown loaches. The other seems to be holding on, but only time will tell.

Treating now nightly with 60% dose of Seachem Paraguard, got a new UV bulb installed for best function, and I finally have no ammonia, No3 under 30ppm.

Plants seem to be loving the new flow from the strong powerhead, but the new O2 content must be offgassing quite a lot of CO2. I used to get almost no pH swing at all, but now I go from 7.2-3 before CO2 starts all the way down to 6.7pH at End of days addition. I have to start it 2 hours before lights on to get enough in for light cycle too.

Too much change at once, but all the levels are good and I would expect fish to be healthy in about a week.

Even with the temp ramped to 81 the plants all seem to be rooting quite well, none of the stems are releasing any more.

The fish illness is still there, losing about 3-5 small fish per day, and medicating daily with Seachem Paraguard, but there are secondary evidence infections of fungal and bacterial nature on quite a few fish. I am not willing to put any more medication in the tank, so UV, Paraguard and high quality system water is I hope enough to save the bulk of the remaining ~100 fish. I do see about 20 that seem to be clear of all symptoms at this time.

Even as an industry specialist, getting complacent with an established system that hasn't had any issues for years will wake you up to your error when skipping quarantine/upsetting the system too much.

gotta QT 100% of the time!
To view links or images in signatures your post count must be 10 or greater. You currently have 0 posts.


To view links or images in signatures your post count must be 10 or greater. You currently have 0 posts.
klibs is offline
Quote Quick Reply