(View User Tanks)
PTrader: (1/100%)
Join Date: Mar 2013
Posts: 386
Red Sea Reefer 450 build
Hey all, been planning this one for a while now. A little back story, I've been in the hobby for quite some time. Started with fresh water fish only, moved to planted tanks, moved to reefs, back to planted, back to reefs, back to reefs...etc. And now here I am setting up another planted tank. The tank was previously a full blown reef, unfortunately the time required to keep it beautiful was too much as I travel for work a lot. I wanted something low maintenance so my wife can take care of it while I'm gone without having to worry about the demands of a reef. I decided on a low tech, low maintenance, easy flora, and color fauna setup. I've spent the last few weeks planning and preparing for the switch, I set up my reef with detail in mind and am attempting to do the same with this new planted adventure. I'm taking my time with it and doing it right. That being said, if I can do something better, please tell me! Anyways, lets get to the details/pictures and catch y'all up to present day.

60" Photon V1 wireless
-I am aware of the issues this light may present, it IS in fact a reef light, however each channel can be dimmed.
-The whites are a 4500k, which has me a bit worried. But we will see.
-I chose to use this light purely based on the amount of money I spent on it. I tried to sell it in my local reef club for a fraction of the cost but had no takers. So I'm going to give it a spin and see how it goes.

Titanium heater
-Unsure of brand, bought it a long time ago. Having a titanium heater with its own dedicated controller is wonderful. It also has an alarm for when the tank gets too cold, figured this out about 20 minutes ago when I filled the tank with hose water!

Jebao DC 9000
-Return pump with dedicated controller and ~10 settings to control amount of water being returned. I'm going to have to turn this sucker almost all the way down so it doesn't blow my poor plants away.

Gyre FX130
-Powerhead made for reef tanks, designed to produce a laminar flow pattern. Works wonderfully, however its VERY strong. It was perfect for a reef tank, but just like the return pump this will be turned to the lowest setting. And even then I may have to replace it with something smaller.

DJ Powerstrip with individual switches
-This singular piece of equipment has made my aquarium experience so much better, being able to turn a single pump off without having to find the correct plug is the best thing in the world.

No skimmer (I assume this is still standard practice for planted tanks, at least I hope so. Because I just sold my skimmer!)

Fauna: (Planned) -- This is a wish list, based on what I remember from YEARS ago. Off the top of my head most will work well together, however PLEASE tell me if some of these wont play nicely. I plan to do plenty of research before adding anything but extra help won't ever be turned down.
-Rainbowfish! (All sorts. Planning on roughly 30, in groups of 3-5 per sub-species)
-Cories
-Khuli loach
-Killifish
-Tetras (Probably one LARGE school of one of the below)
-Rummynose
-Glowlight
-Green
-Cardinal
-Bristlenose pleco
-Albino most likely, haven't decided.
-Snails of all sorts
-Crabs! (The driftwood was specifically selected to allow out of water access for crabs)
-I REALLY want vampire crabs
-Fiddler (Possible, but most likely not)
-Red Claw (I'll have to have at least one of these, I love them)
-And more, haven't finished planning.

If you cant tell I plan to stock heavily, I feel the extra filtration with the sump will allow for this. Weekly water changes are planned, but will of course monitor levels to determine the tanks needs.
No CO2 (yet...I already feel the pull of high tech. I'm going to try and resist)
No ferts
I have toyed with the idea (theory?) of zero water changes. Which would include SOME ferts, but that idea is on the back burner until this beast is stable.

Hardscape:
Huge drift wood, as previously mentioned I picked this so I could include crabs in my stocking plans.
3 Large/Medium rocks, no specific type. They're just something I picked up at a rock yard a few years ago. They we're also in my last planted tank and I loved them. I do have a few pieces of Seiryu laying around but I wanted to keep this natural and simple.
50lb Seachem Flourite Dark
40lb Eco-complete

The focus of this tank will be to keep it as simple as possible, both in maintenance and style. Large plants in the back, smaller in the front, the usual. I chose to go with only a few pieces of real hardscape as to maximize the amount of room for plants and bottom dwelling fish/snails/crabs/whatever. I have recently started to really appreciate the minimalist style of tanks.

I feel like I'm missing something on the left side but I'm not sure what I want to put there, if anything...ideas?

Anyways, I think thats it for my plans. Lets get to the pictures of the teardown/build!

This was it a few months before I tore down, the blue lights make it very difficult to get a good picture And the teardown! Lots of trash cans were used to haul the water out. My 2 year old daughter thoroughly enjoyed helping me pour the water out the front door. She cheered for me every time, I felt so accomplished. The first fill was with hose water so I could do some serious scrubbing and get the old coraline algae off. Which didn't work at all. I ended up draining it, refilling with fresh hose water, and adding 2 gallons of vinegar to the tank. After letting it run for 2 days the tough algae fell right off when scrubbed. Drained it, filled it with fresh water, let it soak for 2 days, and drained again. I was very paranoid about introducing vinegar to the tank, but got some solid advice from a member on this forum telling me not to worry about it, as long as it dries completely after the vinegar soak. This was the first attempt of a scape, the wife didn't like it and I realized I didn't either. Moving on. This is what I landed on, I actually really like it a lot. Simple, and follows the rule of thirds(ish) There were a couple variations in between, they all looked very similar but this one was THE ONE! I added one 20lb bag of eco complete to either side of the tank, near the back. That way I could slope the Flourite a bit and (hopefully) not have it degrade over time. I talked to one of the guys at my LFS and he agreed the eco-complete may be course enough to hold the flourite in place and maintain a slope over time. I wont be devastated if eventually its all flat, but it was worth a shot. And the fill! It was freezing outside and I got soaked doing it, but I managed to bring the hose inside without spilling a drop on the living room floor. The wife will be pleased. This was also where I realized my heater had an alarm for when the temperature drops past a certain point. The hose water was at 61F, and the alarm is still going off right now. It's been beeping at me for the past hour. I'm ready for it to stop now. I set the tank at 78F, which is what I read rainbowfish prefer. And this is how it sits. It's super cloudy, got some old (but clean) filter socks in to help with the mess. If it clears up enough I'll be picking up a bunch of plants tomorrow. 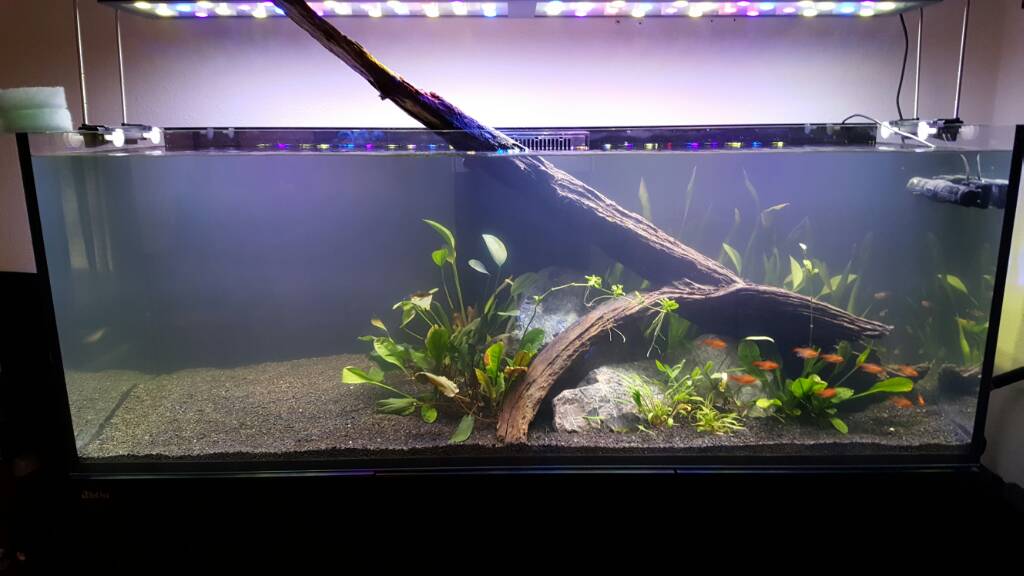 Planted with the first few fish 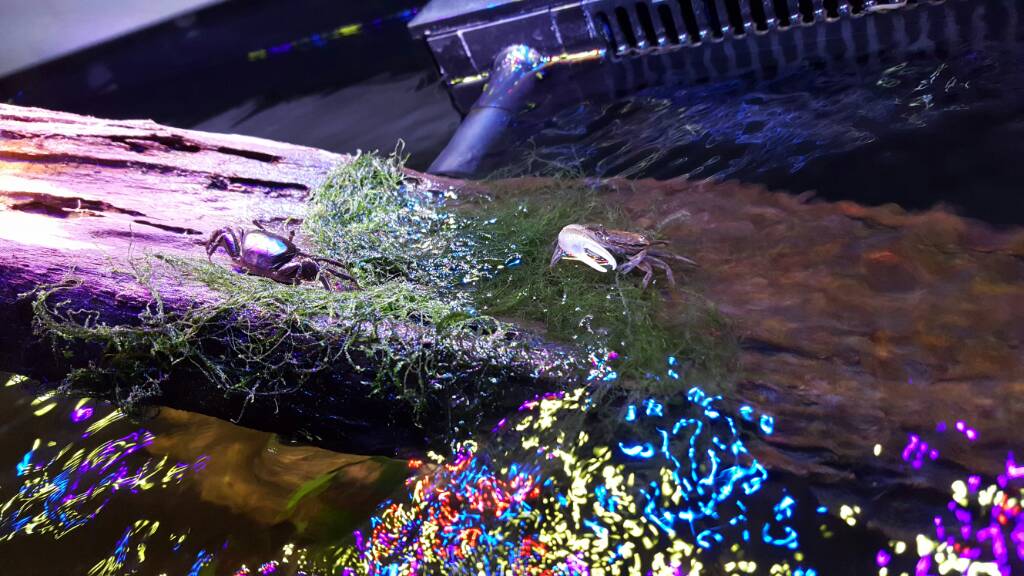 Got some fiddler crabs! They're always up on the wood waving at me as I go by 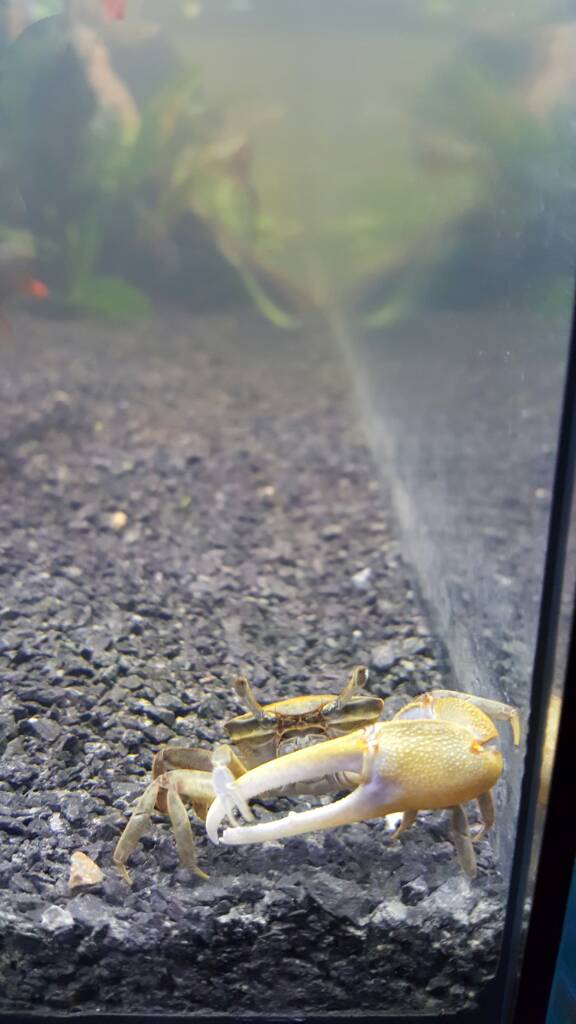 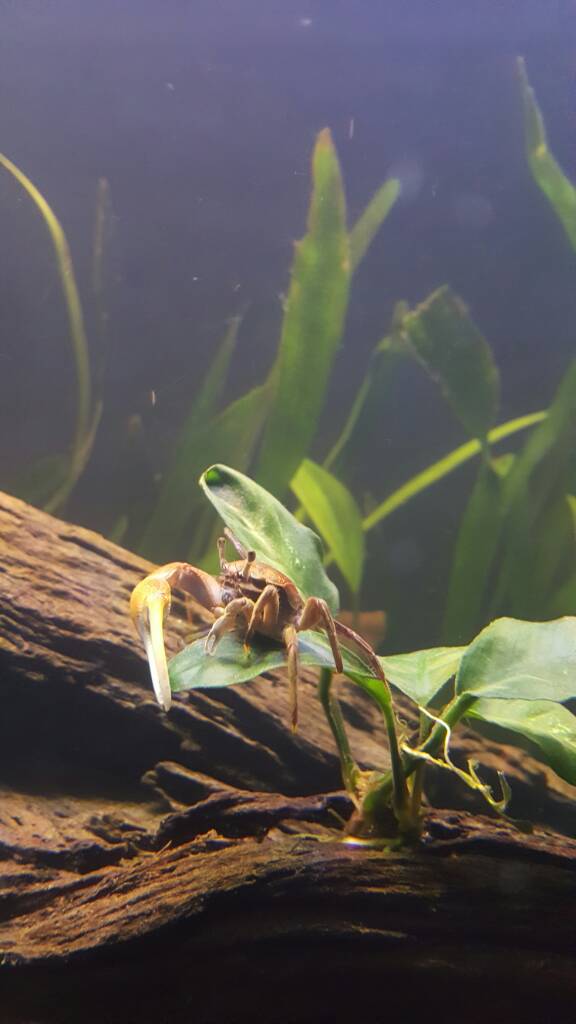 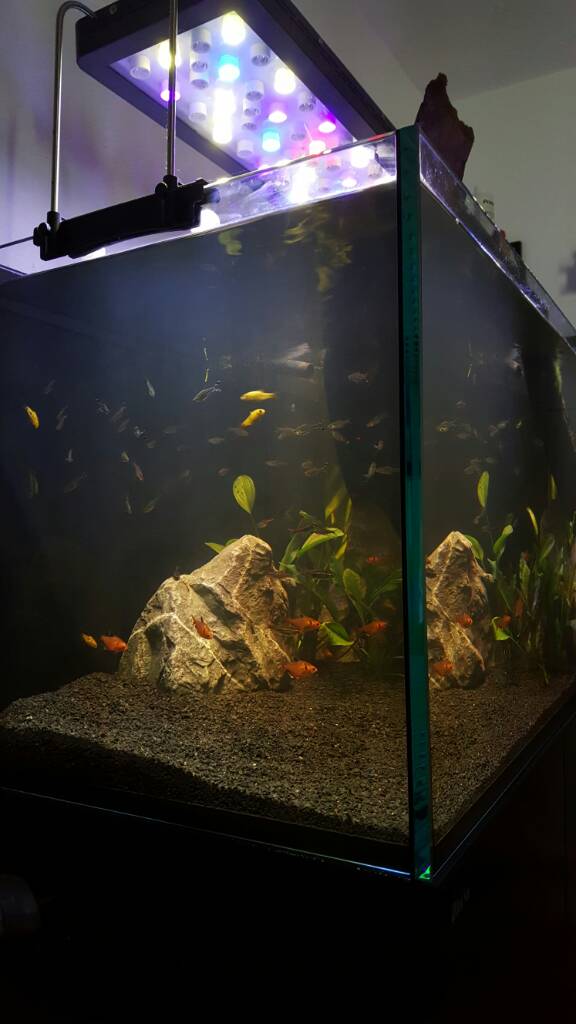 The wood is leeching tannins like crazy, I'm doing weekly 40% water changes to keep it looking decent and not like a black water tank 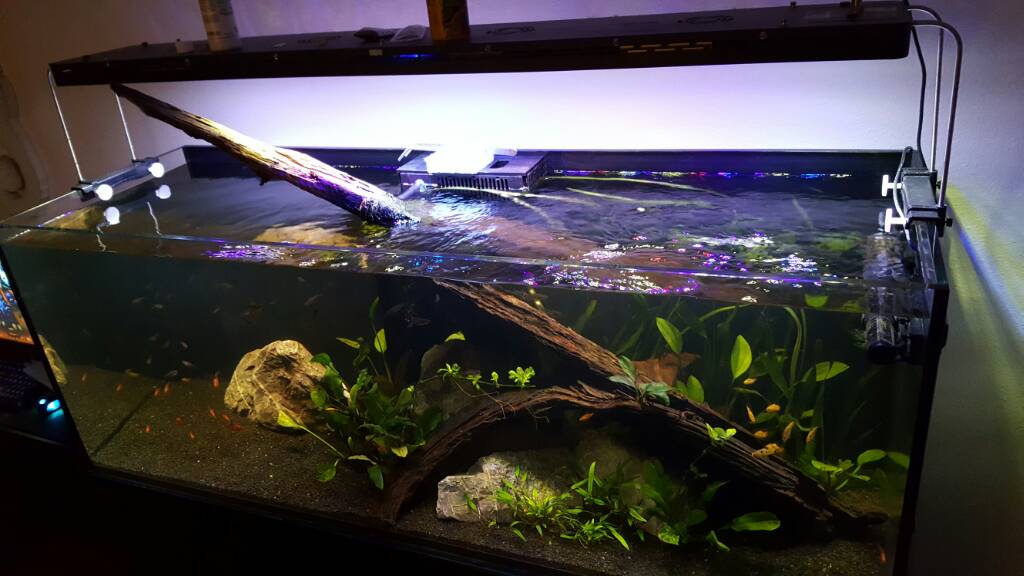 Added that rock on the left, that area is planted with various stems now I just haven't taken a picture of it. 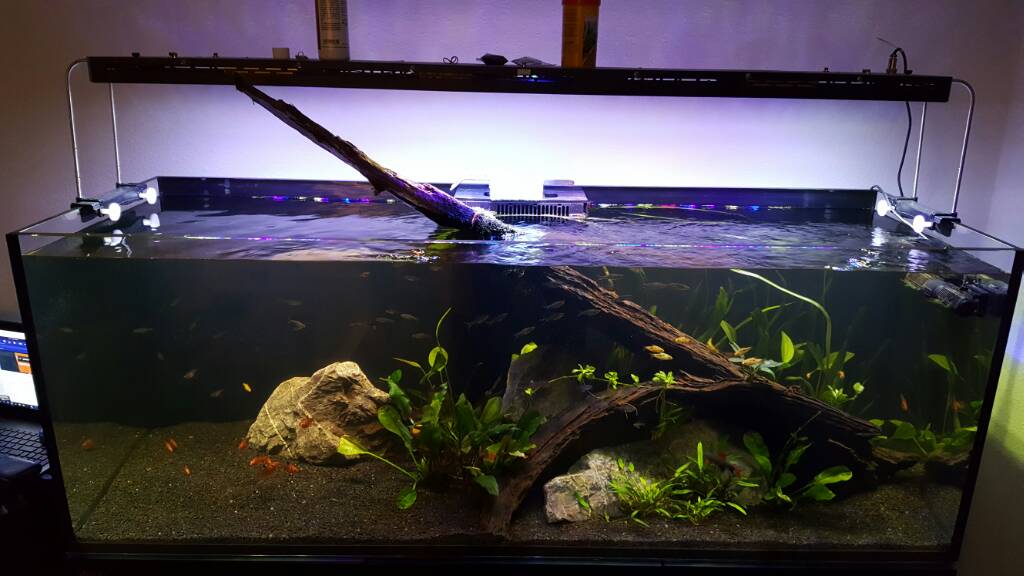 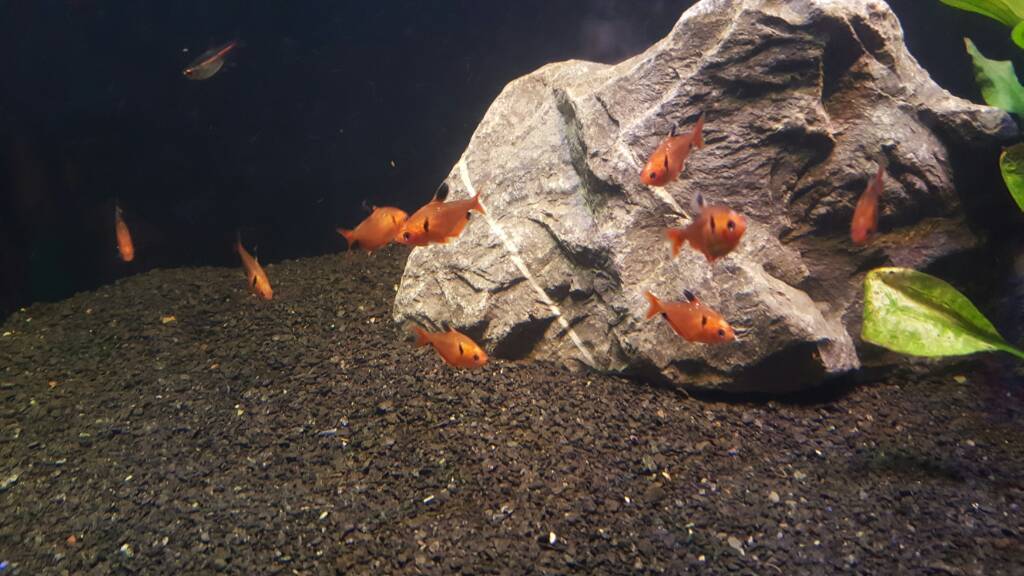 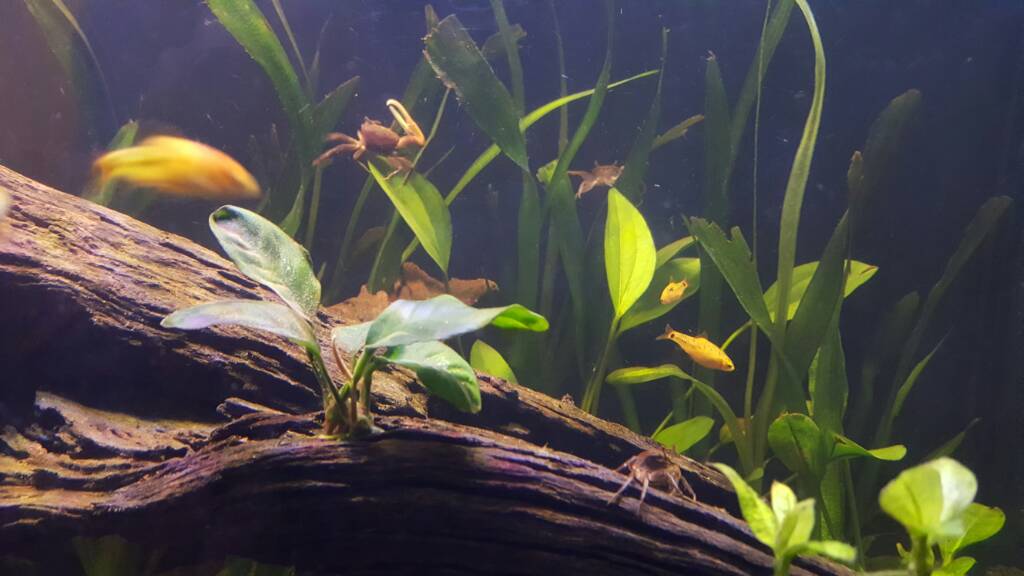 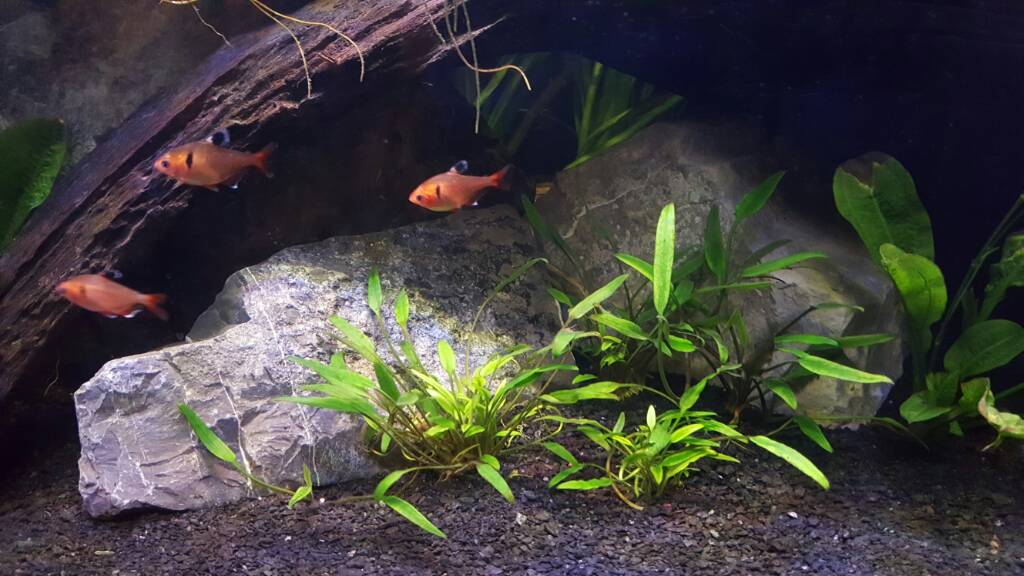 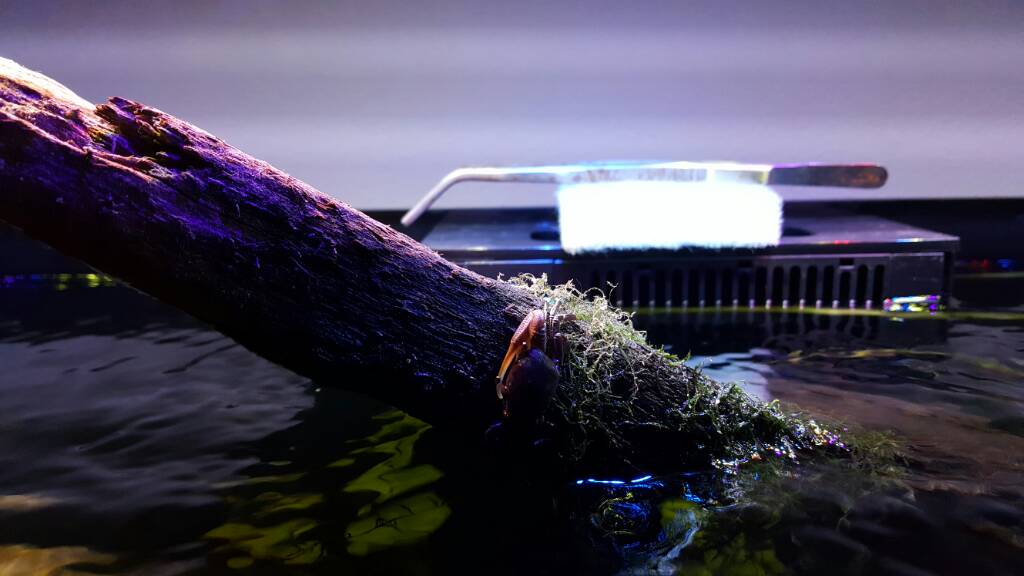 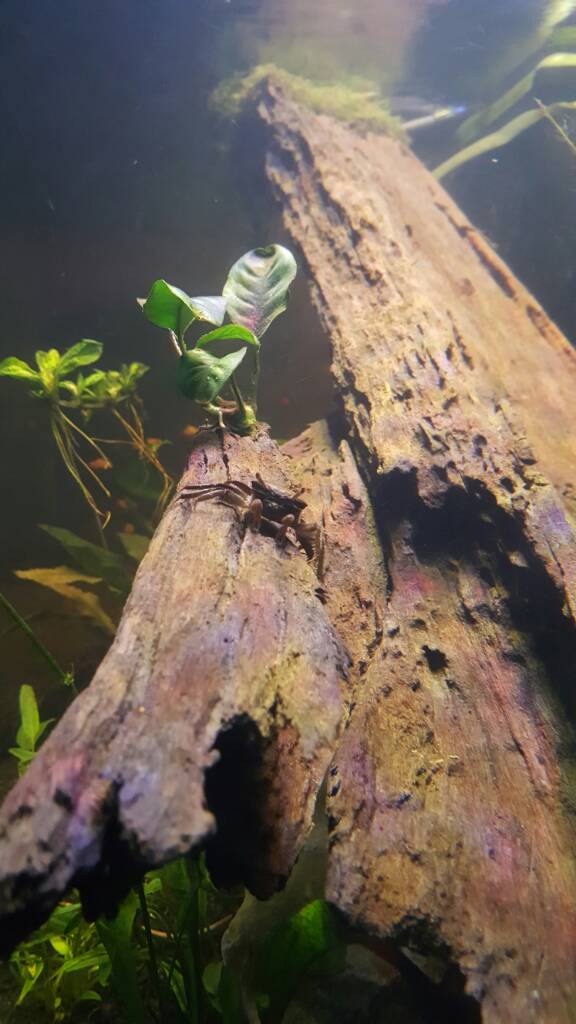 Plenty more to come. I want to fill in the front a bit more with crypts. I've got some root tabs coming in the mail, I can tell my plants need it. Dosing Excell every day.


To view links or images in signatures your post count must be 10 or greater. You currently have 0 posts.
Opare is offline
Quote Quick Reply
post #4 of 10 (permalink) Old 01-13-2017, 02:15 PM Thread Starter
Kirbybtf
Planted Tank Obsessed 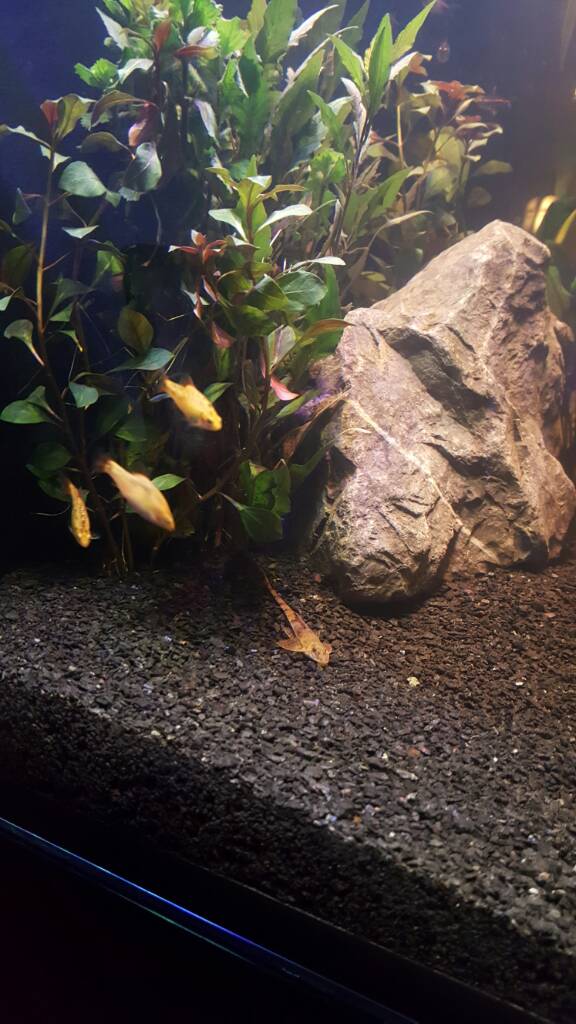 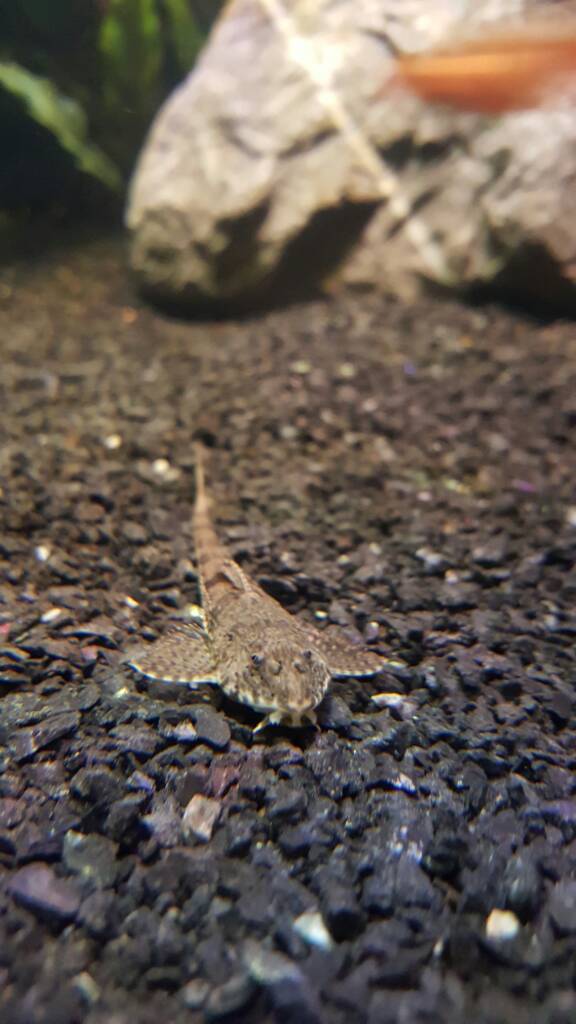 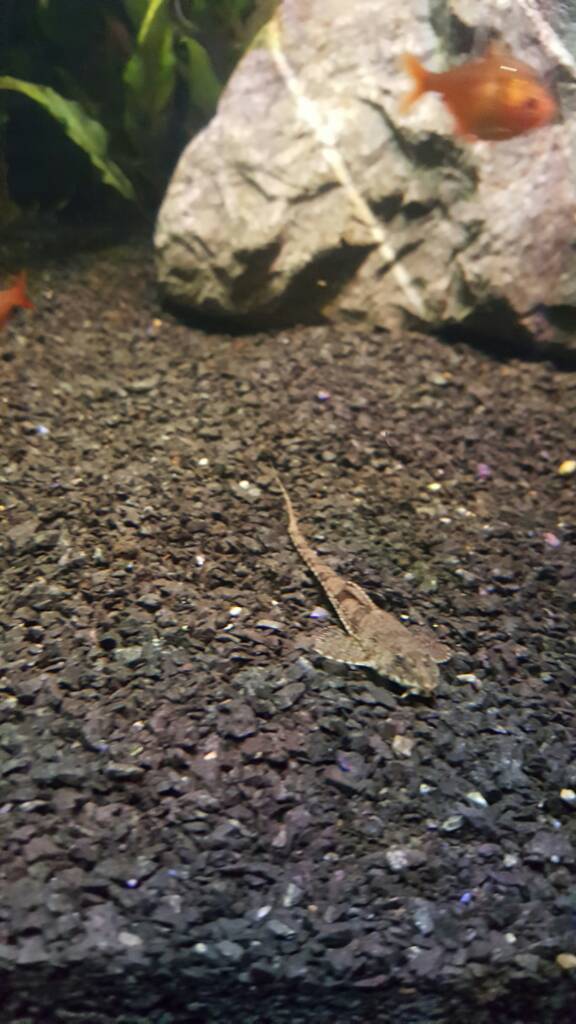 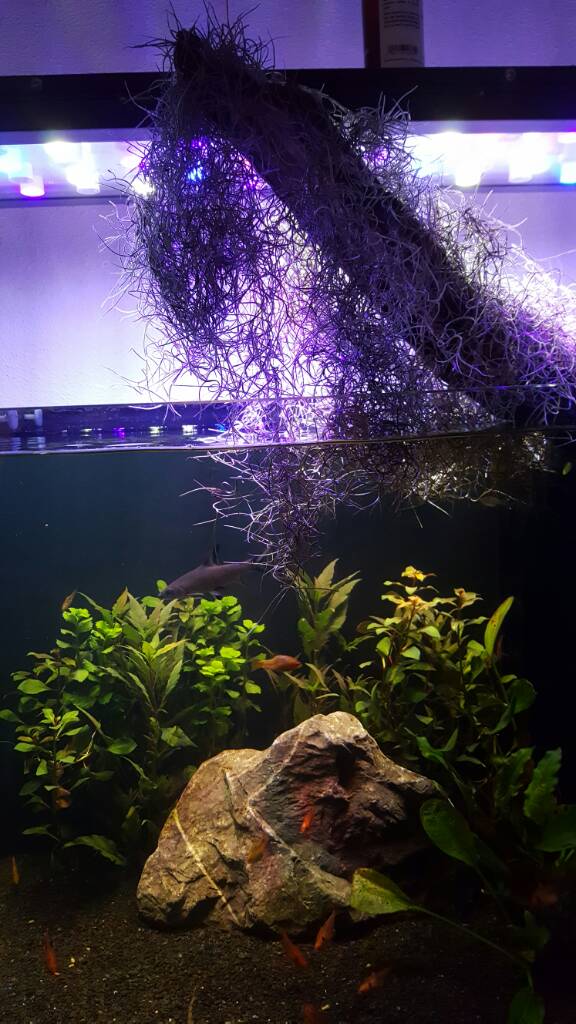 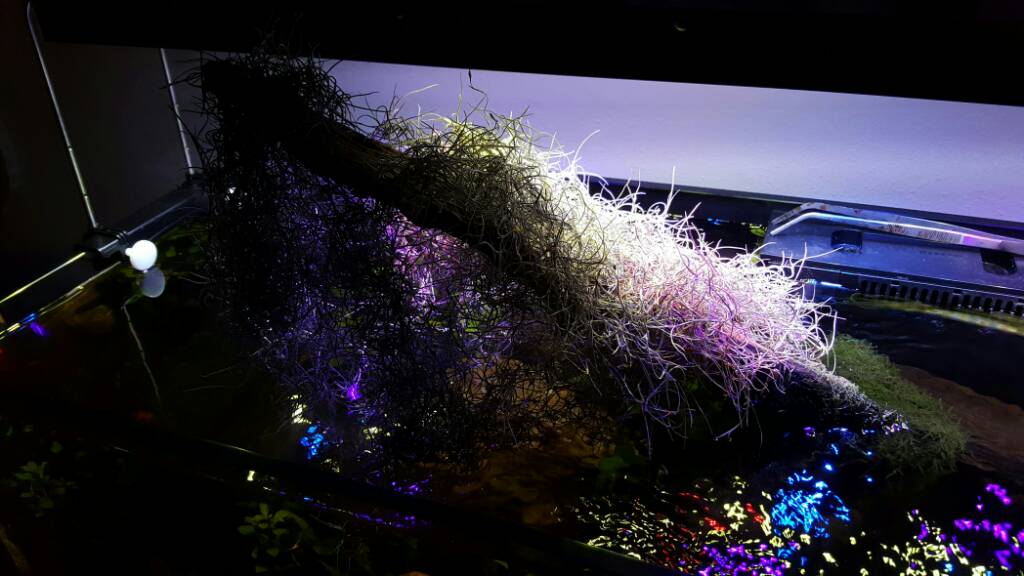 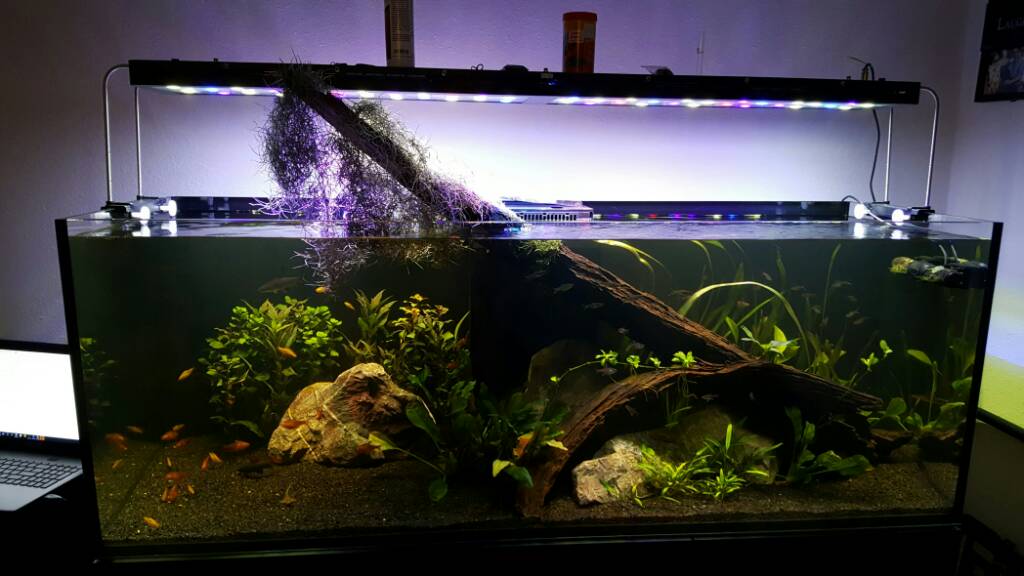 FTS, this tank is slowly turning into a blackwater tank from all the tannins.

(View User Tanks)
PTrader: (0/0%)
Join Date: Sep 2013
Location: Desert SW USA
Posts: 1,282
Tank looks good! You can always use purigen to help with removing the tannins to get clearer water. Love the crabs you have and the "tanning wood" that they have to hang out on!
300g 8' acrylic aquarium acquired, in process to build/setup/plan setup


To view links or images in signatures your post count must be 10 or greater. You currently have 0 posts.
chayos00 is offline
Quote Quick Reply
post #7 of 10 (permalink) Old 01-17-2017, 12:37 AM Thread Starter
Kirbybtf
Planted Tank Obsessed

(View User Tanks)
PTrader: (7/100%)
Join Date: Apr 2012
Location: Orlando, Florida
Posts: 239
Ever had any problems with crabs escaping due to the open top?
高校のアクアスケーハーです -
To view links or images in signatures your post count must be 10 or greater. You currently have 0 posts.
iter is offline
Quote Quick Reply
post #9 of 10 (permalink) Old 01-17-2017, 10:09 AM Thread Starter
Kirbybtf
Planted Tank Obsessed


(View User Tanks)
PTrader: (0/0%)
Join Date: Dec 2016
Posts: 9
As a fellow reef to planted tank converter myself, I feel your pain regarding the coraline alagae removal!

I used sandpaper on the weir which worked well!

I am currently using a reef tank light with the blue intensity down and the white
Intensity at 100%. I actually don't think the light is causing any issues at the moment.

I have had substation growth with my HC and Monte Carlo. And the rotala and bacopa are transitioning really well from emersed to submersed.

Hopefully you have the same results!

Can I ask what brand of light you are using, as it looks similar to my lights ( evergrow brand ).
roryf is offline
Quote Quick Reply