(View User Tanks)
PTrader: (6/100%)
Join Date: Aug 2010
Location: Nampa, ID
Posts: 752
The Guppy/Shrimp Tank - 40B
We had guppies, mollies, platties, swordtails, etc... as kids but since I've been an adult I've avoided them. What I remembered was having fish die and having tanks way overstocked.

Well, after some thought all due to a facebook post in a local fish group, I now have guppies.

A person posted up a tank that was supposed to be 45G in group with 100+ guppies, a few RCS, stand, HOB filter, some decorations (large rock bottom), heater, and air pump. He was asking $90. He talked about selling the guppies and had sold them so I himmed and hawed about it due to the price and the ability to start breeding a fish of some kind to support my hobby.

I ended up with a brand new 40B from Petsmart on clearance for $48.00. It was the best deal on a tank I could find outside of the $1/gallon sale.

I put one anubias in it yesterday and a piece of fake driftwood letting it run overnight.

I went and picked up the tank today which had a small tetra hob on it and a 150w heater. The HOB went immediately onto the 40B along with the Pengiun 350.

Most of the guppies I transfered to the 40b (still catching a few remaining) and most of the RCS along with the Decorative rocks (not the large substrate rocks). I'm still catching some of the straggling fry.

So now I'm monitoring this new tank decided on what I'm going to do with it and watching way to many guppies swim around. lol

And yes my breeder box ended up in the corner. lol

To add this is after I put a Versa-Top on it from Petco and an Aqueon 36" strip light (only a 30" bulb).
My Tanks
75 Gallon Planted Community Tank

(View User Tanks)
PTrader: (6/100%)
Join Date: Aug 2010
Location: Nampa, ID
Posts: 752
That big piece is actually fake. lol I picked up three fake ones while waiting for anyone to get real ones in. I still haven't found the right one for my 75. I am thinking about leaving that fake piece in this 40B and removing the fake plants to try and get some java moss growing on it.

My Finnex 24/7 for the 75 arrived yesterday so this tank now has my old 36" 2 x T5HO Aquaticlife fixture on it, without feet at the moment.

I had a nitrite spike on this tank also. I ended up putting one of the aqueon 55/75 on this along with the Penguin 350. I placed the cartridge itself in the aqueon and the black sponge in the penguin. I found dead fish (more than 24 hours, which is how long I had the tank) in the old filter that had been on the previous tank which was probably part of the nitrite spike.

Either way the dual filters + 2 good water changes (in one day) got it under control.

And no they aren't perfect since I'm using my backup phone w/ a cheap camera.
My Tanks
75 Gallon Planted Community Tank

Added some Val's as well 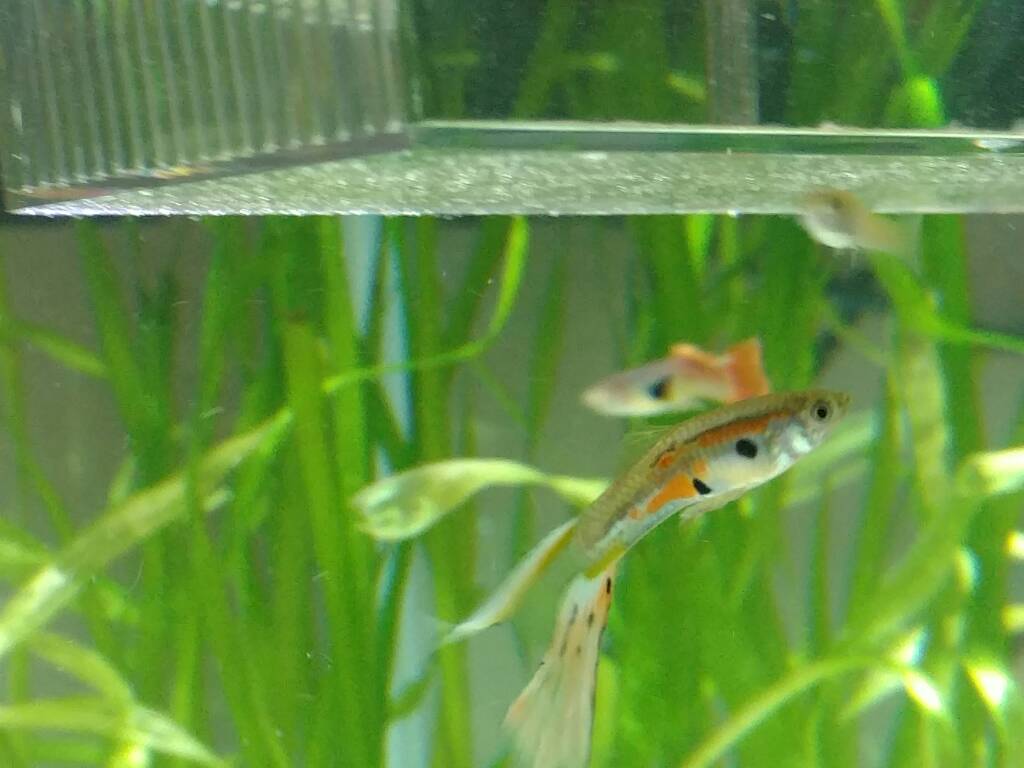 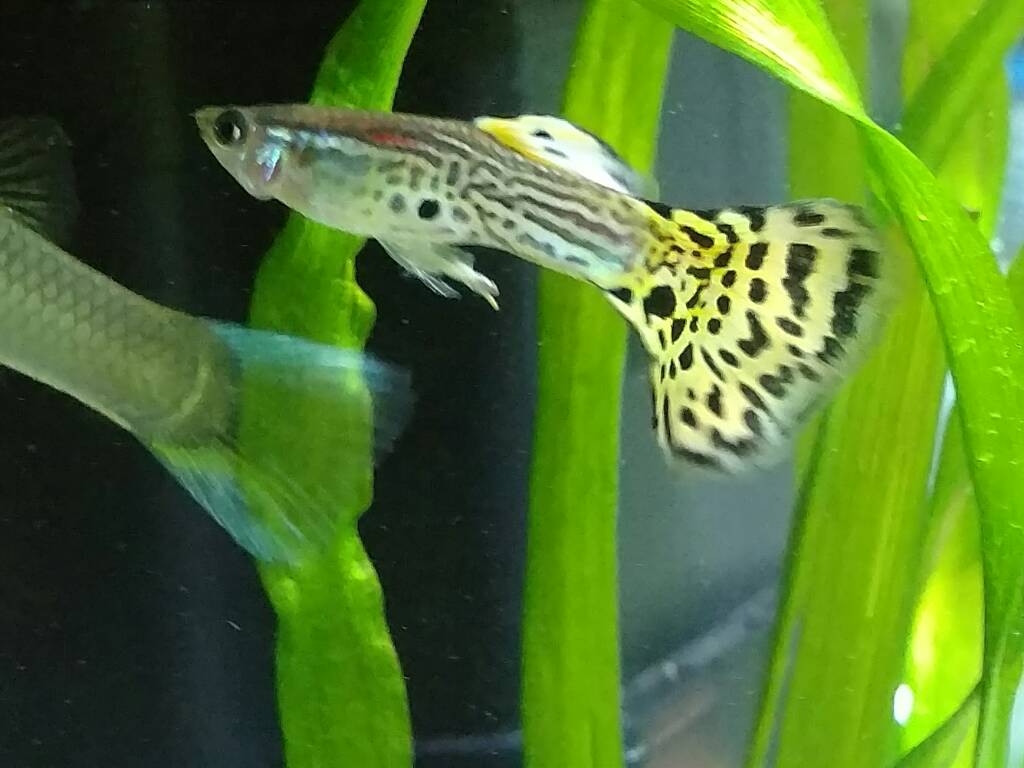 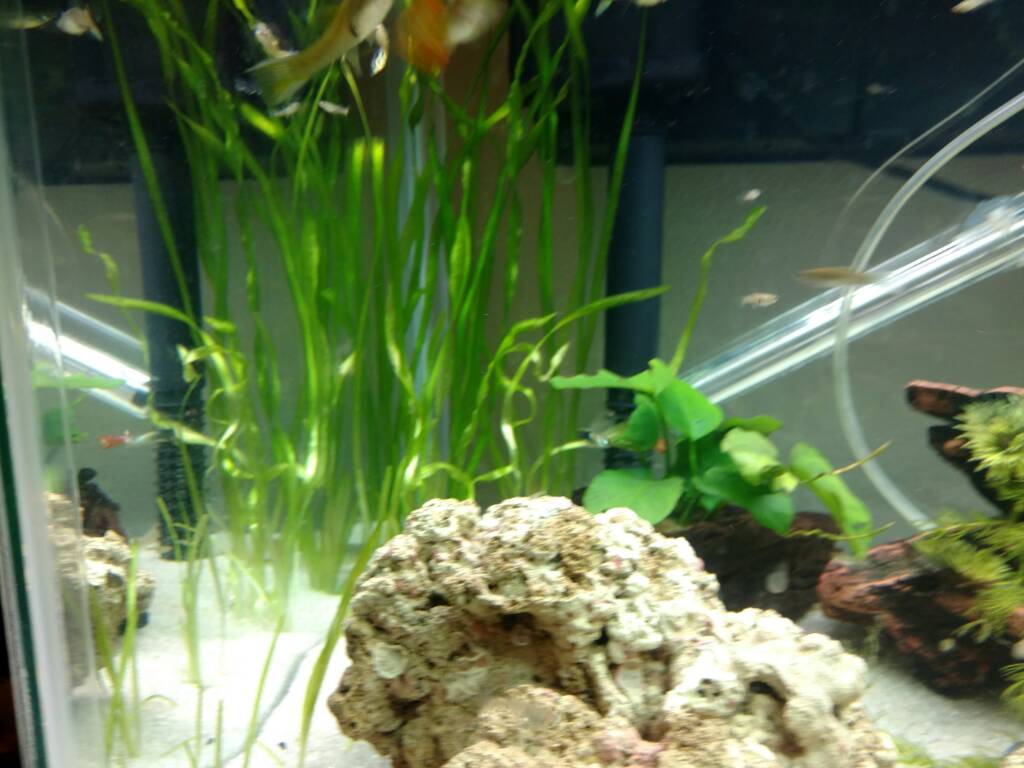 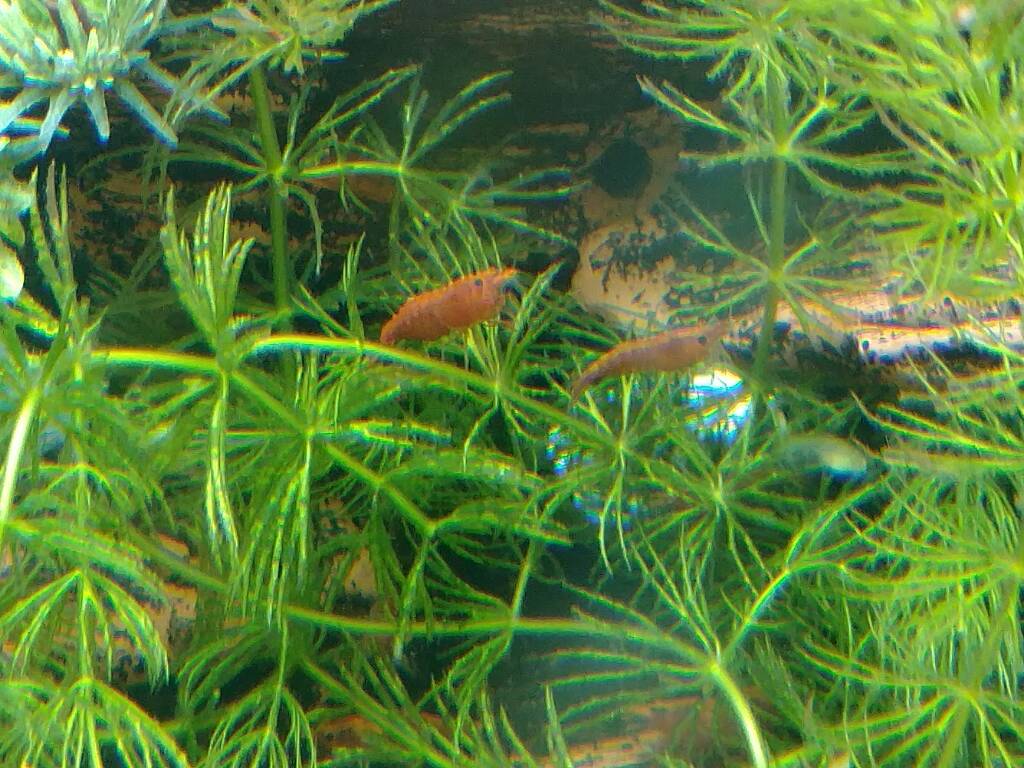 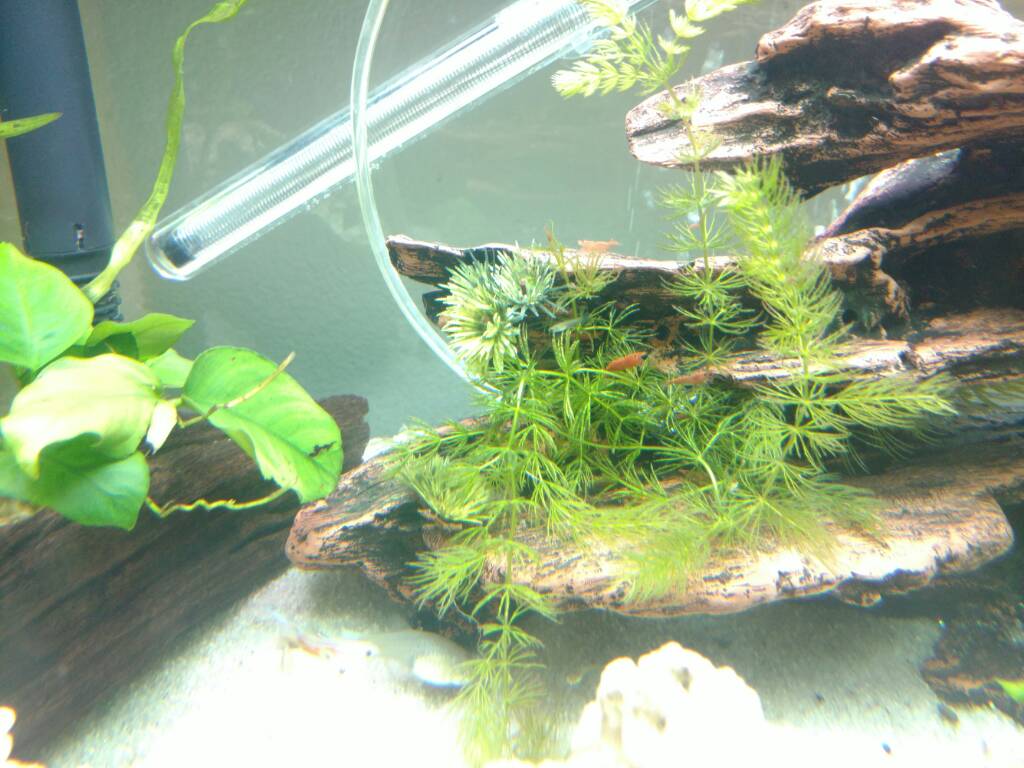 I added a SunSun 302 which will eventually be the only filter and turned the air pump all the way down. After a full night running like that the tank seems fine so I will be pulling the air pump tomorrow if everything still seems good.

I'm going to wait probably a week and then pull one of the HOB's to bring it down to just 1 HOB and the SunSun then a week or two after I'll pull the other HOB and get down to just a canister.

I'm also going to pull a bunch of hornwort out toda, but not sure what I'm going to do with it.
My Tanks
75 Gallon Planted Community Tank

Waiting for the vals to grow in and I need legs for my light for this one. It's a 2x39w T5HO fixture. 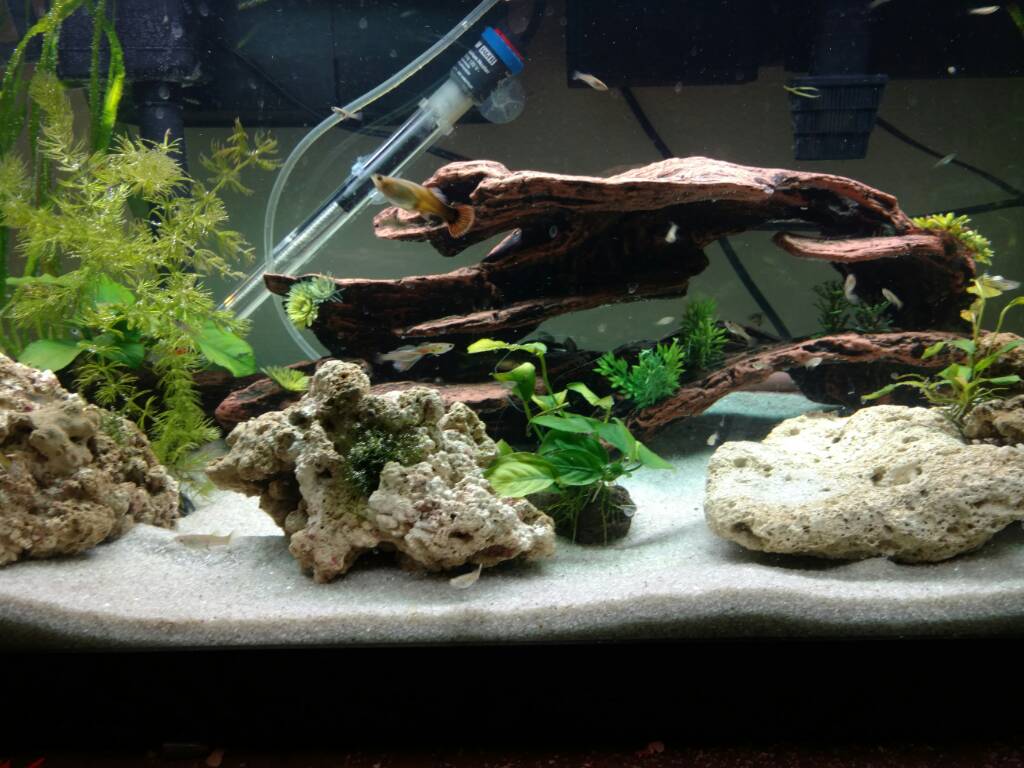 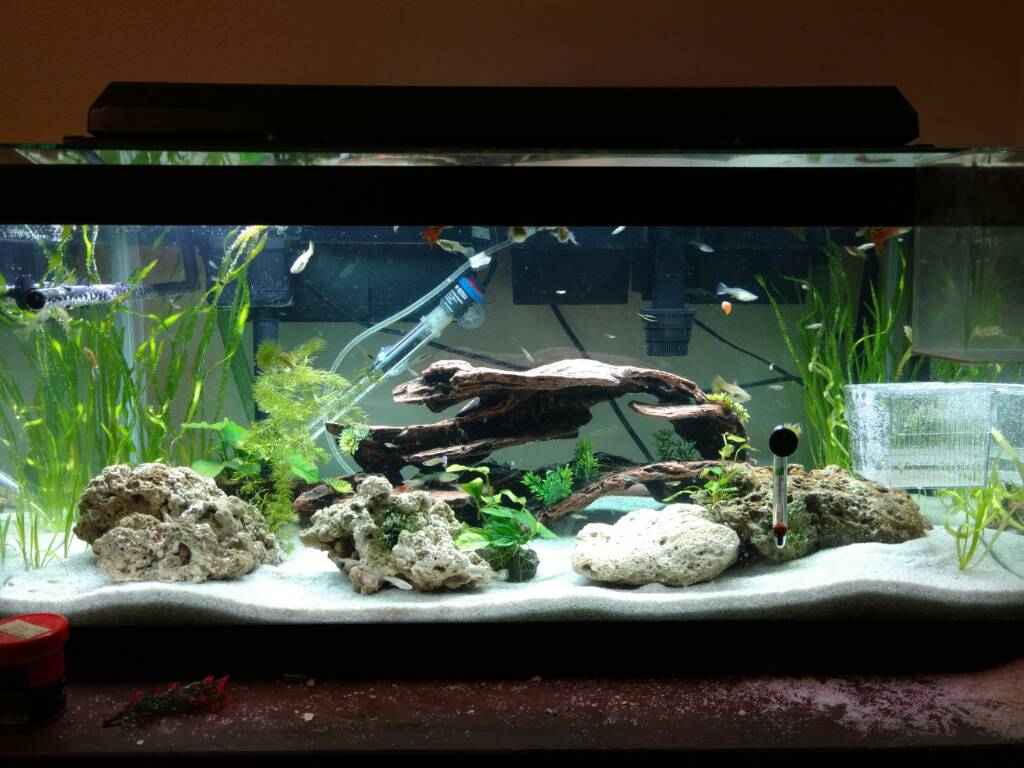 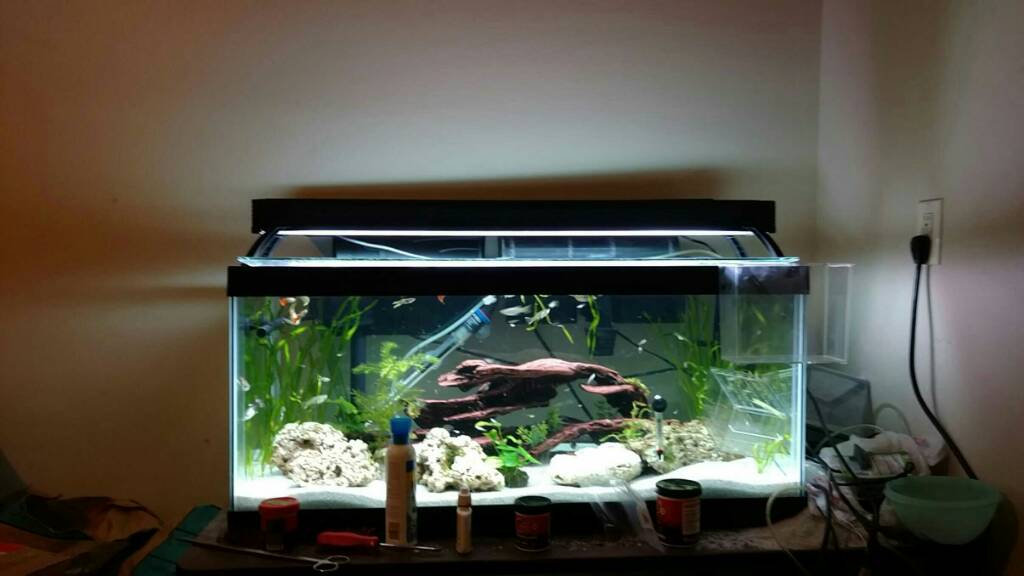 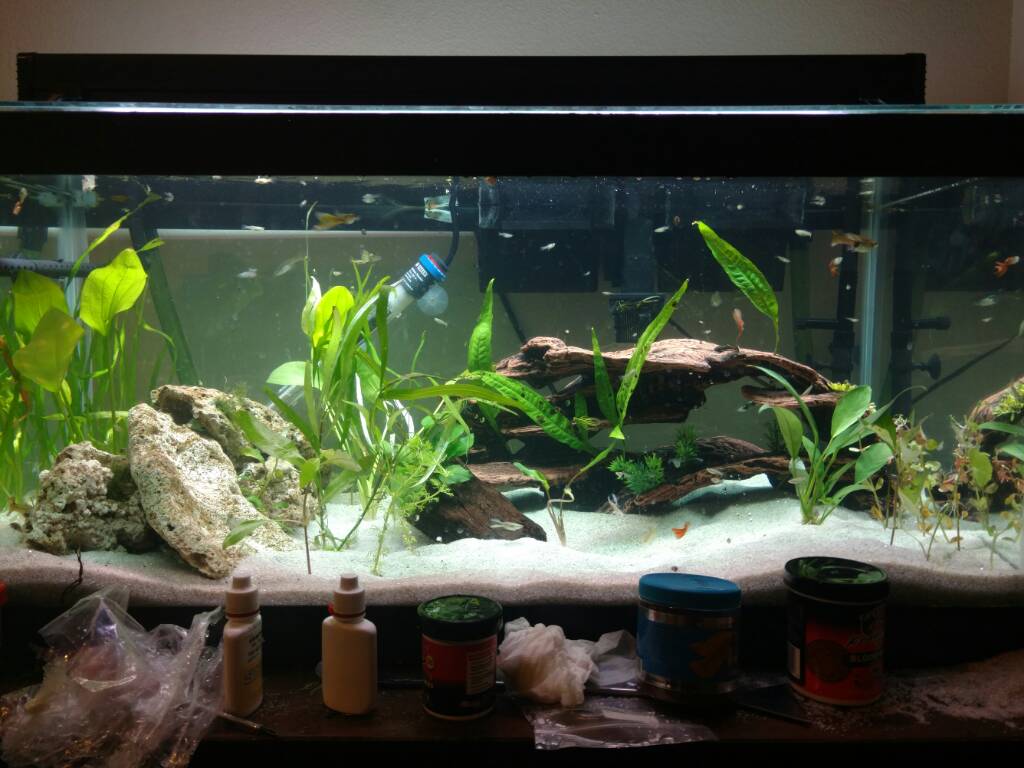 
i see the tank all the time so I never even realized how far it's progressed. Since this post the last post it now has an aquatop CF500UV filter (picked up used), went to a vivagrow and then back to T5 (sold the vivagrow, might get another later), changed stands (yes I did that buy myself, no I don't recommend trying this at home), and had a few fish added.

Other than saying Guppies, Gourami (who likes playing tag w/ the albino cory) and cory catfish (general since there may be 12 in that tank) and shrimp I'm not sure what else is in that tank. I know I added 4 Sterbai, 3 Panda, and an albino recently from my 75 and there were 6 pygmy's but I can never get an accurate count.


It still has no Co2, I even stopped dosing the Co2 Booster on that tank.

So, here are the pictures as it's just grown.

(View User Tanks)
PTrader: (4/100%)
Join Date: Mar 2010
Posts: 856
Why didn't you like the Vivagrow light? I'm thinking about putting one on a low light 40b project I want to start.
To view links or images in signatures your post count must be 10 or greater. You currently have 0 posts.