Seachem Daily Fert Dosing Chart (Help Me Balance)
I have been fighting an uphill battle with a particular tank, I have not been able to dial it in since starting it 6 months ago. I have always dosed my tanks once weekly, a whole product lineup at once. This has been out of convenience and not understanding why Seachem suggests dosing their products across the span of a week based on their chart. If I was to follow their chart I would be dosing something in my tank every single day, who has time for that?

The thing that finally made me dive deeper into this topic is a green thread algae problem I can not seem to resolve. This was never an issue with past tanks dosing all elements once a week yet I am sure there are plenty of other variables between tanks that allowed me to successfully continue using it once weekly.

Regarding trying to balance my tank, I have a test for nitrates and phosphates but I only use the nitrates then base all my ferts off that. I was told when I very first started this hobby years ago to test for iron and base everything off that instead...is this true? EI is tricky, and I really want to see this tank work before I give up on it. 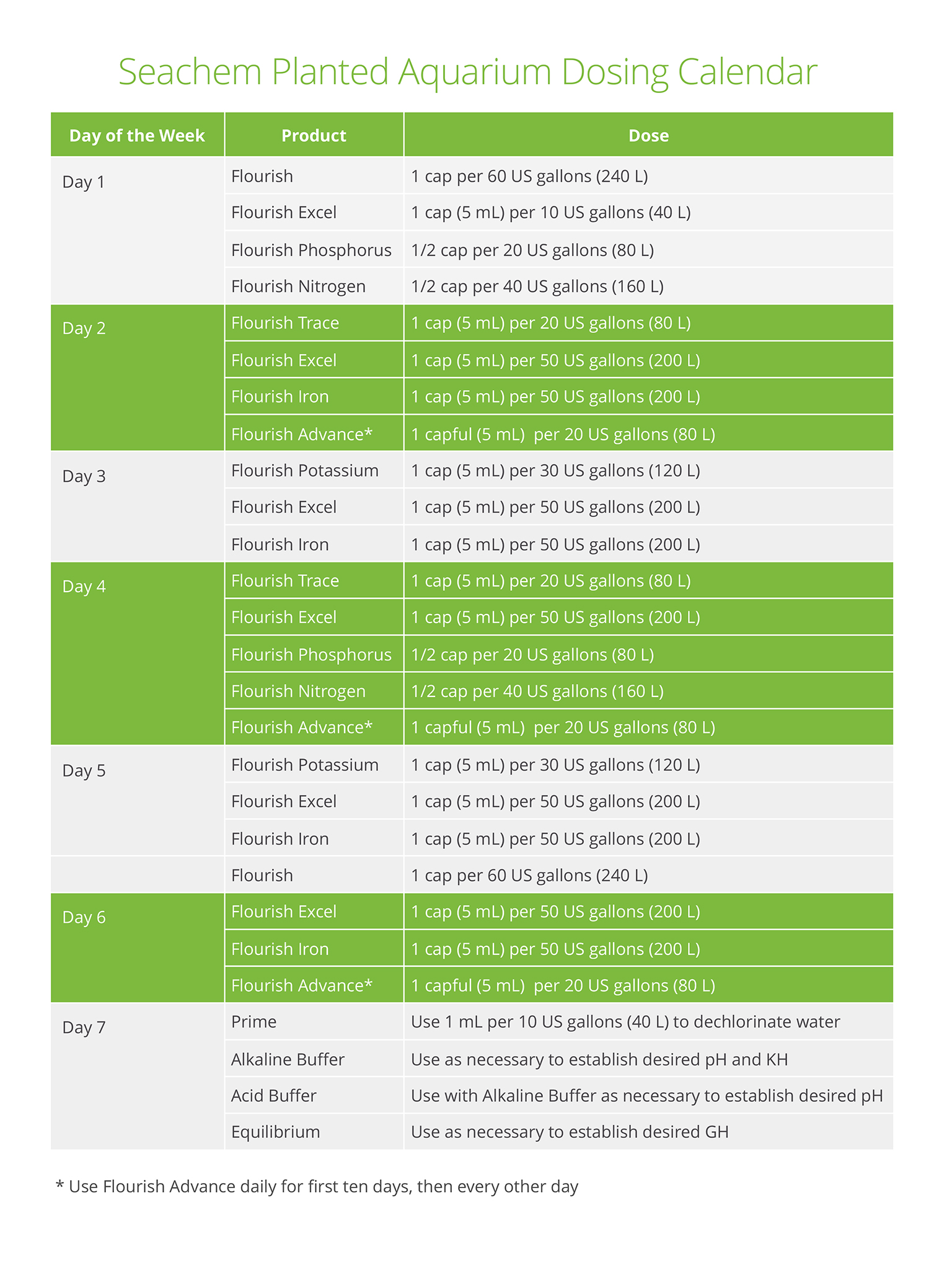 (View User Tanks)
PTrader: (0/0%)
Join Date: Feb 2017
Posts: 858
You don't need excel it's actually harmful to. Plants and your livestock , all the seachem products are extremely weak, however I've neb told by a few highly reputable aquarists as I dose dry ferts not to use csm+B and use flourish in its place on my micro days, I world honestly switch up from seachem to thrive, if you want a more advanced cheaper long term method of dosing I would go to dry dosing, I use nilcog dry ferts and have seen great response in plants abd the deminish of algae.

As far as dosing micros and macros at the same time is a big nono (iron= micro, phosphorous =macro) you dose every other day, LIKE macros on Monday, micros on Tuesday macros on Wednesday micros on Thursday etc etc, with dry ferts you're not dosing everyday in a low tech tank like mine, I dose macros on Sunday after my water change, micros on Monday, skip Wed/Thurs macros on Fri /micros Saturday repeat.

Onto the thread algae it's a nightmare, I had it bad when dosing low levels of ferts, if your plants aren't growing they aren't taking up nutrients which algae will, since switching to dry ferts, dosing twice a week my plants are growing better and thread/hair algae even though not gone its getting way better, to sum up if you don't have a healthy growing robust plant mass you will always have algae issues, the trick is too get the plants to grow to out compete the algae, the right plants (faster growing stem plants for nutrient uptake is key as well)

(View User Tanks)
PTrader: (0/0%)
Join Date: Feb 2017
Posts: 858
Quote:
Originally Posted by Teebo View Post
I dont plan on buying any more Seachem products but I have a lot of it left. I wanted to change to something more simplistic as I have been enjoying the hobby less working so much. Thrive had been suggested as an all in one solution to going minimal.
Thrive is amazing as it's both macro and micro In one. EI dry isn't simplistic so I won't take you down that road, thrive is great.

(View User Tanks)
PTrader: (36/100%)
Join Date: Jul 2013
Location: north east cost US
Posts: 5,715
In my experience I preferred Seachem just because I could adjust dosing in tanks with potassium or iron hogs, or add more phosphate to make my anubias bloom.
I've not tried dry dosing yet.
But when I tried an 'all in one' pump bottle it threw everything off and caused massive diatoms, black beard algae, hair algae, or blue green algae to take hold in the various tanks as the balance was lost. Granted I don't have high light co2 tanks-mostly low to medium light. Sadly I bought a lot of this pump action fert so now I'm stuck with it... about ready to toss it.
Side note I like using Excel-except in tanks with marimo, vals, or subwasertang which it will kill. Starting excel at a 1/10th dose and slowly working your way up over time it has not been harmful to my plants (excluding those mentioned above), fish, or shrimp. In a nearly high light tank I was doing almost 3x dose daily and had a huge shrimp colony. I could dose it in a tank with vals that also had a ton of sword plants that used it up before it could melt the vals.
Teebo likes this.
Due to photobuckets new bs cost for use of images on forums I have deleted all photobucket accounts. I apologize if you enjoyed or found my photos helpful.
Starting to update these threads

Great insight, and thats partially why I went down the Seachem road using it in just my 2 gallon so it would be cheap. I keep the bottles in my refrigerator and just fill some small travel bottles to keep in my aquarium stand with a syringe. I dont really change my layout once I have it the way I want, it stays that way so I figured I could "dial it in" to my plantscape so the chosen species all thrive under their ideal nutrient supplies.

I do use Excel in this tank I try to dose it daily, and for the last 10 weeks its been mostly dosing it during the dark period to fight my string algae (doesn't work). Many years ago I only used it once a week (on dosing day) in a large amount but I realized it works much better daily as it gasses off after 24-30 hours. It really bothers my Amano shrimp though, however my Cherrys seem completely unaffected not sure why it only affects my Amano. I thought about going CO2 on this nano tank to reduce maintenance which is the goal, I would rather go through more setup work and upfront cost to reduce regular maintenance time.

Maybe you all can help me dial in this particular tank of mine based on my plants, water volume, and WC schedule (rarely). This is my last connection to this hobby I have time for...I am hanging onto it by a thread (literally haha). I heartbreakingly shut down all my other tanks when I stopped working from home, one by one over the course of 6 months. I really needed to acclimate away from the hobby I was so passionate about. This is all I have left, my goal was to capture all the aspects of the hobby I enjoyed in one small tank, and keep it as low maintenance as I could handle. So far it has been the most challenging tank I have had so its defeating its purpose. I had a 16-gallon Iwagumi tank, a 12-gallon riparium, and a 0.5-gallon pico tank. This is still what I would consider a pico-scale tank because its technically a riparium coming in at 2 gallon max capacity including the external canister. I have a separate thread dedicated to this tank, but I have been so busy just keeping up with maintenance that I haven't had the time to post about it: 2G Pico Waterfall Riparium 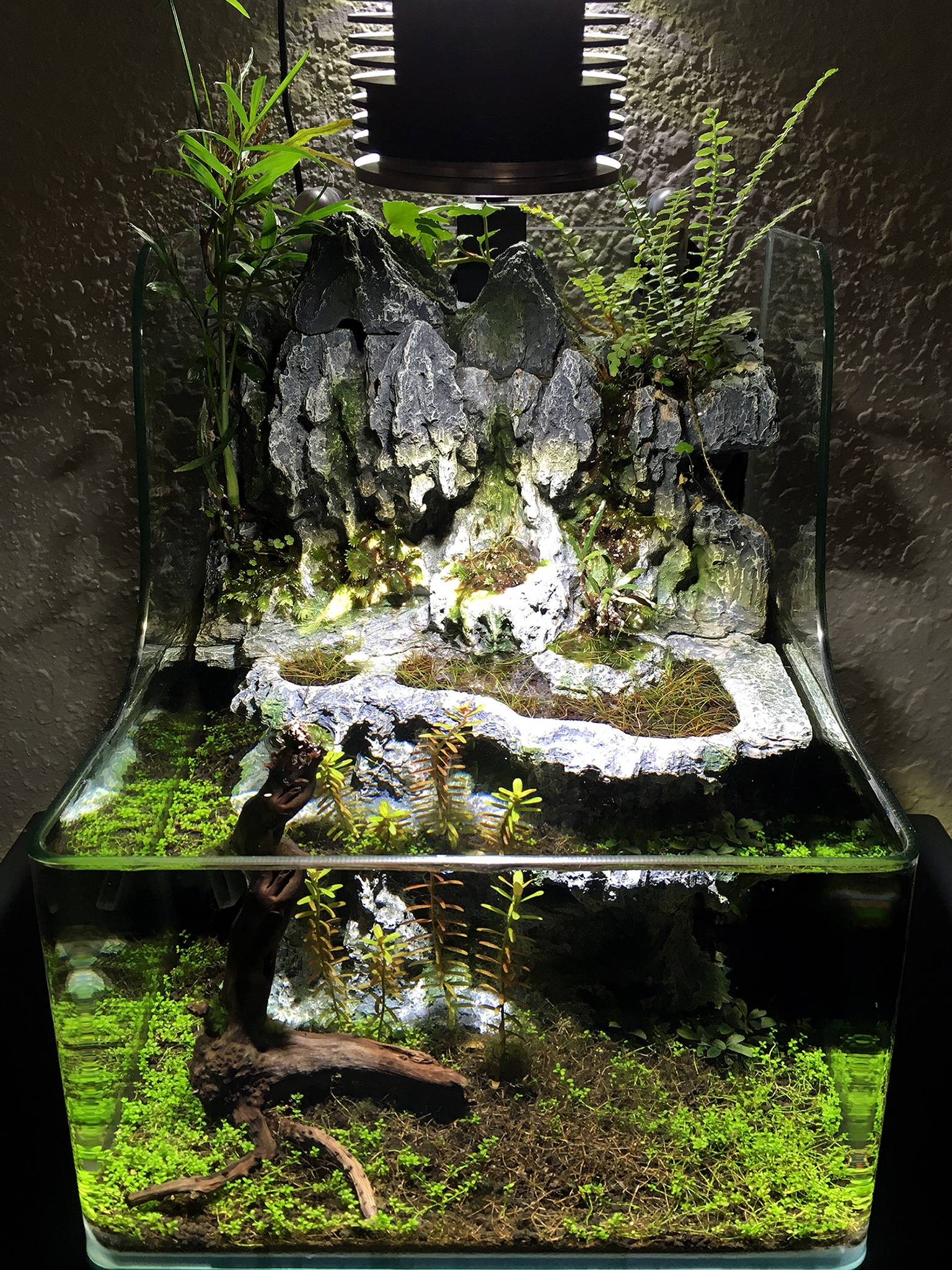 I have 2-3 shrimp and a small Nerite snail as a bioload, but the snail may be the largest load on the tank. My plant load consists of emerged plants as well, consisting of a Lemon Button Fern, Dragons Tongue, Pixie Dixie Ivy, and a dwarf palm (table garden/gift basket species). On the back rock work I also have semi-emerged plants in the water column such as Hydrocotyle sp. Japan, Eleocharis Parvula, and Fissidens...which tends to collect algae where the shrimp can not pick at it above the water line. The snail however does clean the back rock work out of the water but does not do a very good job on any green or BBA. The BBA is probably due to nutrient deficiency swings. Pretty simple under the water line, a carpet of Hemianthus callitrichoides, Eleocharis Parvula, some Rotala Macrandra, two clumps of Bucephalandra Red Mini that don't seem to be growing or dieing in the semi-shade, and some Red Crypt in the back right corner in the shade that are not doing well at all. The use of Excel may be contributing to the stagnant status of my Dwarf Hairgrass, Buce, and Crypt which are more reasons to go CO2 even on a small tank like this. Its kind of a heavy plant load so I have a hard time getting the nutrients right without it crashing cycles. I try to run it mostly as a closed system besides for the fact I dose it, that is I dont feed anything in the tank but I dont have it dialed in yet to that point. I had previous tanks to where the algae to invertebrate ratio was balanced so that I dont have to feed the inverts, I only fed them when I had nitrogen lows. This is tricky with a snail though without starving it and has proven to be a challenge in this tank, I went for a smaller size "fancy/premium" Nerite with all the cool red/yellow swirls certainly the best looking shells among the Nerites. I have given up on that snail and I am now trying to source a "horned/thorn Nerite" those always seem to stay the size of a regular baby Nerite (Zebra/Tiger, Racer, etc). However those are very hard to find and the only place I have ever seen them is the big box store Pet Smart. Along with the closed system method I rarely do water changes because the nutrient level runs itself down weekly, the bio-load is low, and the top off water is distilled so my guesstimate is that the TDS is in check. The pH is always stable whether its peak dark or lighting cycle. I do a water change maybe every 10 weeks, and I vac when I do the WC but only recently started vacuuming because I was allowing the carpets to establish but then they crashed.

This tank has a 2 gallon max water capacity but I feel it has the plant load of a typical 5 gallon planted tank so therefor I dose it based on 5 gallons, that has worked for a while but the string algae got out of control. I moved again 2 months ago and this was the only tank I brought, I did not go far but the tank took heavy sloshing so disturbing the substrate may have caused this. I decided to do the first water change since refiling it upon moving, I gave it a good vac and reduced the nutrients to what seemed more suggested for 2.5 gallons below. Seems to be doing okay now on the algae but I don't want it to crash, I stopped dosing for 3 weeks all together to see what happens and it started to crash so now I have to spot dose Excel to fight the BBA as the old carpet rots away. The Rotala Mac. used to be much more vibrant and red.
Excel: 0.3mL Daily
Flourish: 0.3mL
Potassium: 0.6mL
Phosphorus: 0.3mL
Iron: 0.3mL
Nitrogen: 3mL

I think there are certain elements I could experiment with raising to the 5 gallon territory right? Like the Flourish comp, and iron? I keep the nitrate level between 5-12ppm its hard to tell sometimes...I use the API liquid test kit. I have tried a few other kits and did not like them but have not tried anything expensive like a Hanna.