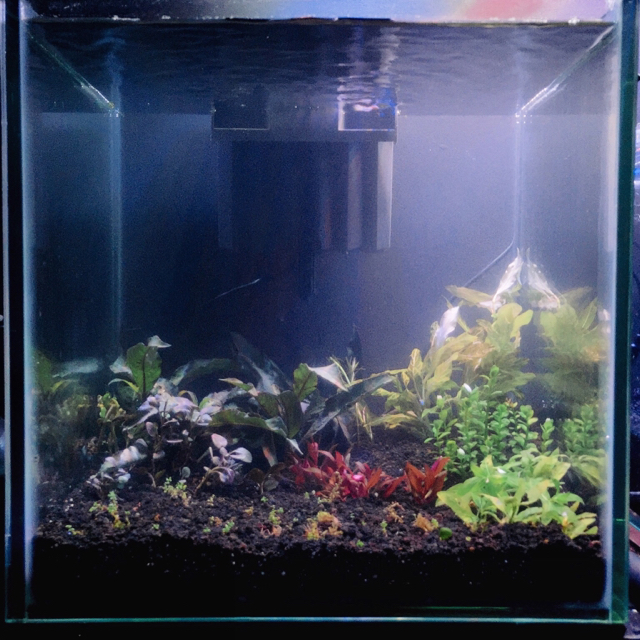 After failure attempt, this time bravely enough to venture once more. 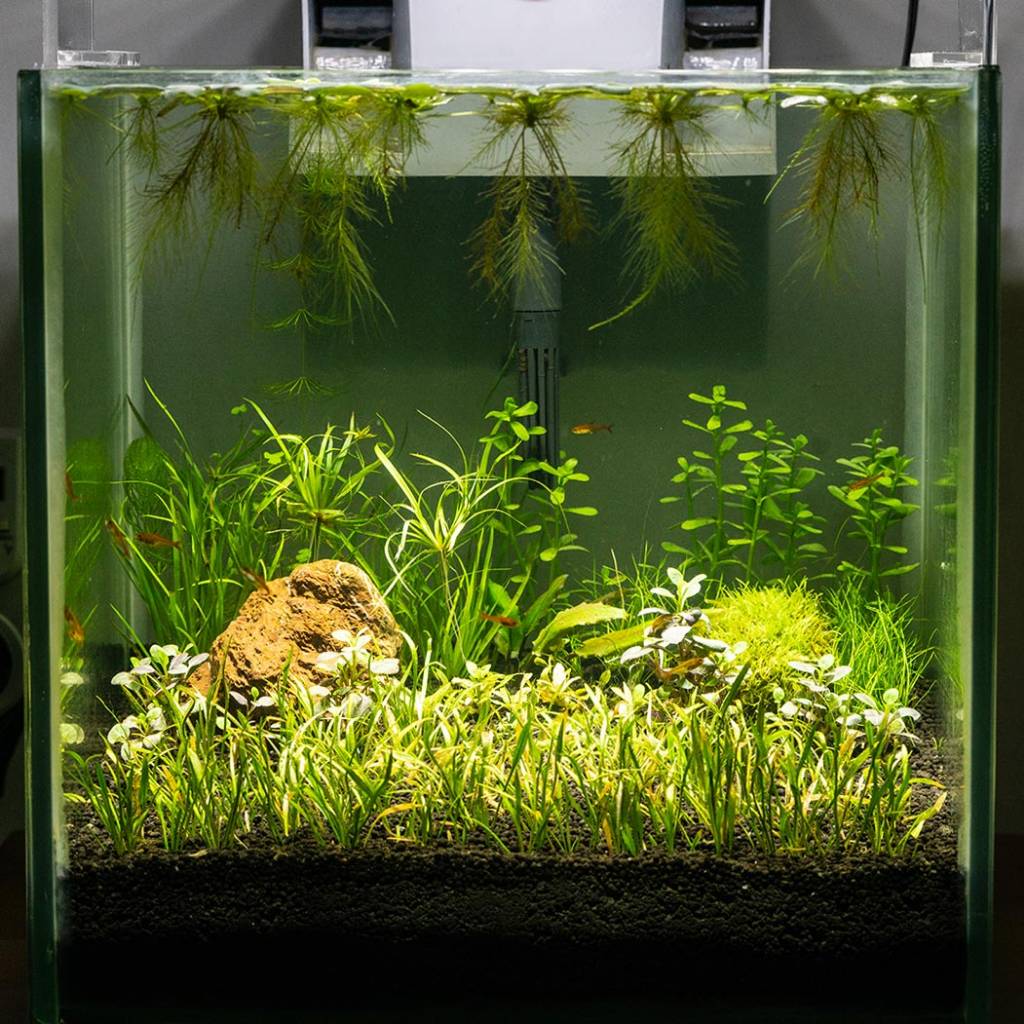 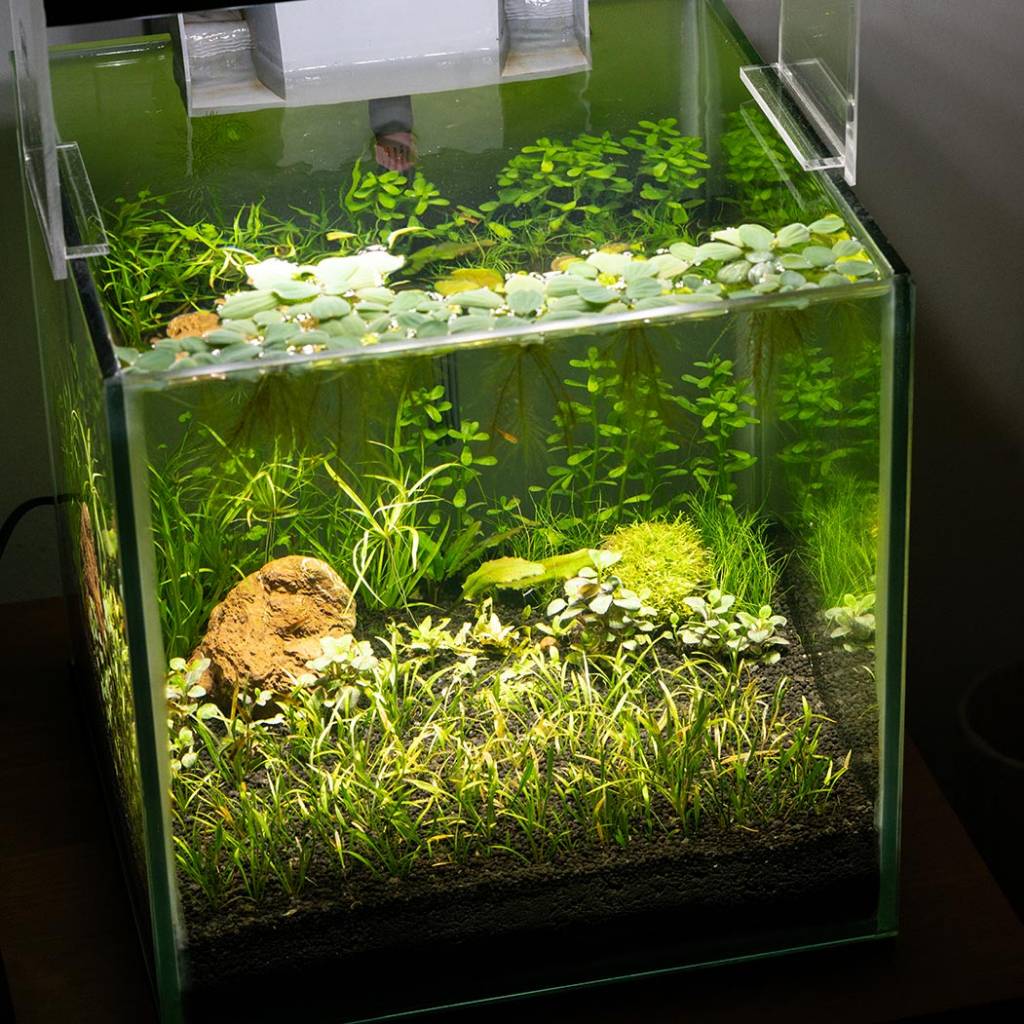 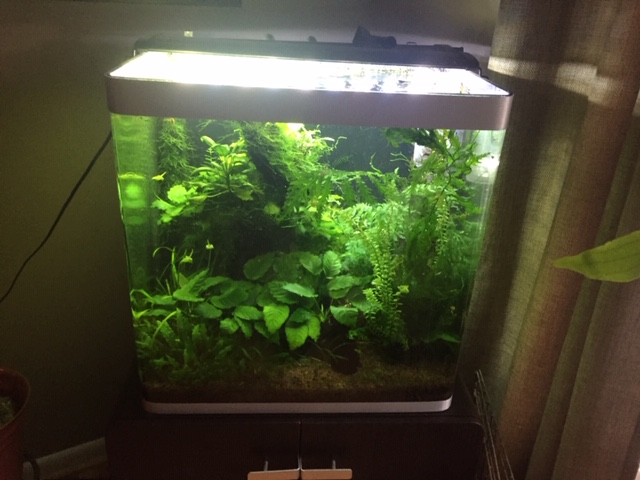 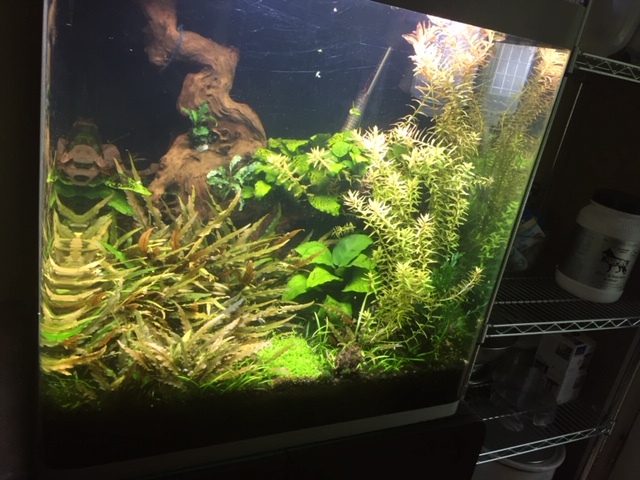 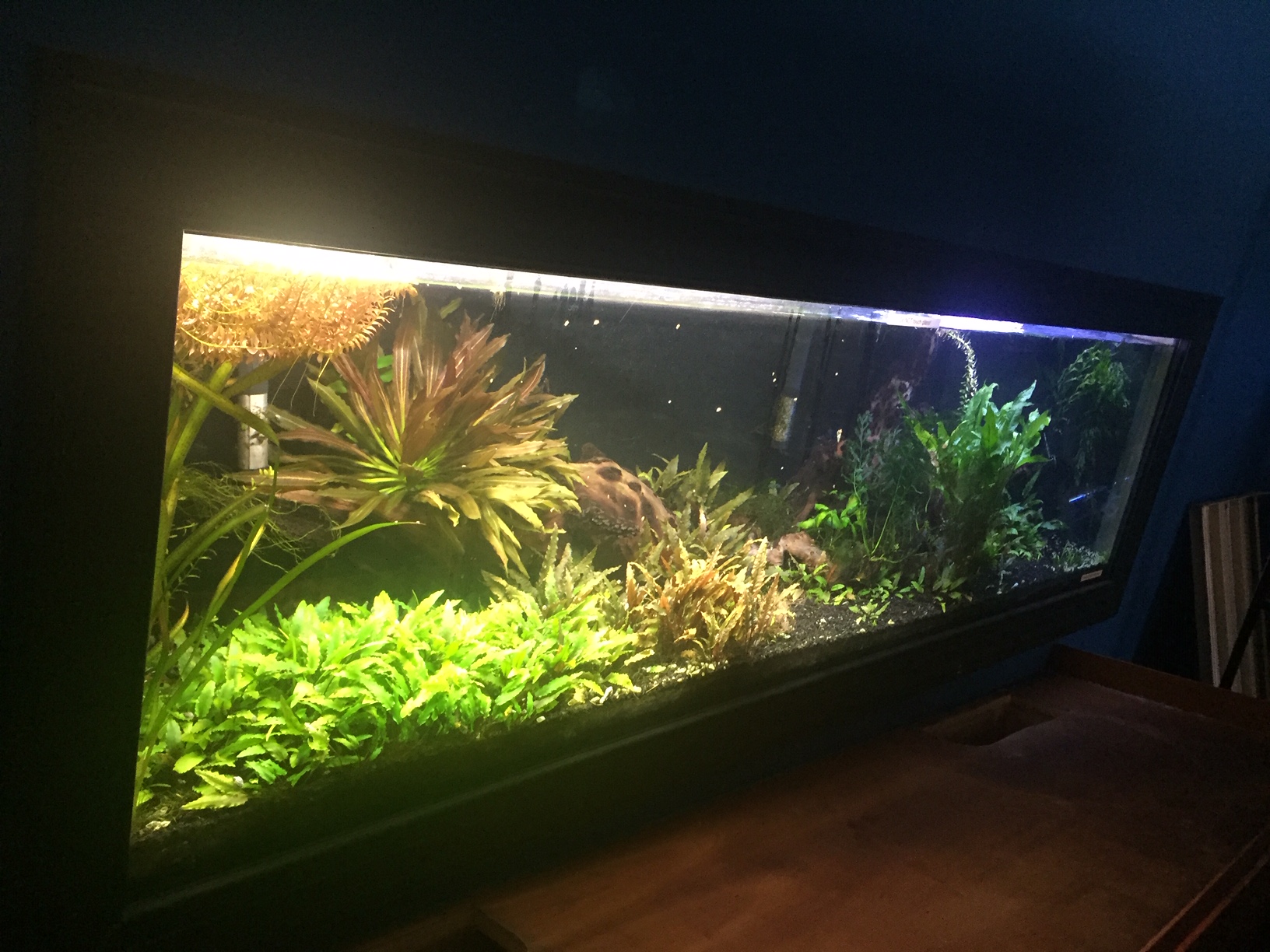 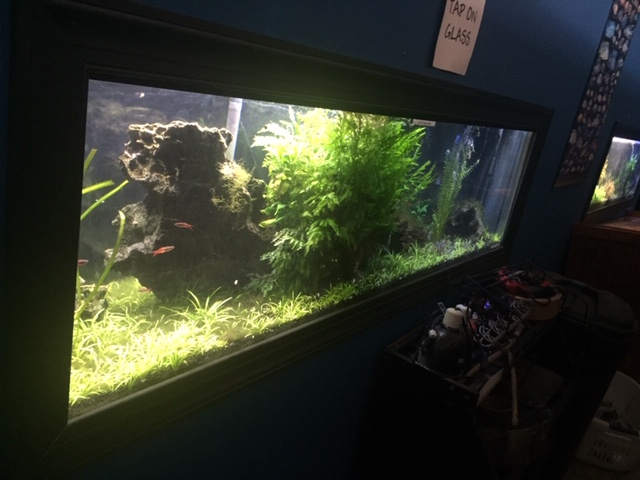 ]
Thanks for sharing these. What kind of sword is that in the 1st 125 tank? Red melon? Osiris?
And are those crypts in front?
And what are the orangish floating plants in the left? Or are those tall stems that reached the top and are floating?

(View User Tanks)
PTrader: (13/100%)
Join Date: Feb 2008
Location: Asheville, NC
Posts: 2,067
Sword is a red melon. Not quite sure what happened because I didn't place it on the mopani wood, it somehow sent a runner there I believe. Crypts are wendtii green, brown, and bronze in order from left to right. The tall stems are rotala. The right side of the tank is a mess because I was trying to catch a really unusual shrimp out and started moving things. Naturally, I never got him and just messed up the scape.
Desert Pupfish likes this.
Nothing good happens fast in an ecosystem.
Blue Ridge Reef is offline
Quote Quick Reply
post #2107 of 2134 (permalink) Old 07-07-2019, 01:37 AM
Mitsute
Newbie Fauna:
14x CPDs
7x Endler
1x Badis
3x Otocinclus
Assorted shrimp
3x Nerite snails
Mark Fisher, Saxtonhill, Tessa and 10 others like this.
Journal
To view links or images in signatures your post count must be 10 or greater. You currently have 0 posts.


To view links or images in signatures your post count must be 10 or greater. You currently have 0 posts.
Thelongsnail is offline
Quote Quick Reply
post #2109 of 2134 (permalink) Old 07-16-2019, 01:20 PM
livebearerlove
Planted Tank Enthusiast

(View User Tanks)
PTrader: (0/0%)
Join Date: Aug 2013
Location: Minnesota, USA
Posts: 680
I have a lot of tanks- but particularly my low tech fry tanks need CONSTANT trimming (they are very 'lush'). Extremely low tech- they even have crappy filters (one internal itty bitty one and the other a sponge filter. Here is a photo of the two:
Photo one: HC, dwarf hairgrass, fissiden fontantus, christmas moss, anibia, and some air plants on top of the filter.... yes, this needs trimming! lol. I just always put it off because of the design the mosses push up against the glass. oops.
Photo two: Pogostemon, water sprite, riccia, Clinopodium brownei
Both just keep my fry.... and tons of shrimp that keep breeding.
Boostr, Warpiper, Desert Pupfish and 1 others like this.
Giving back creates a virtuous cycle that makes everyone more successful (as long as they cycle!)
7 Tanks and counting..... plus all these critters to feed critters
livebearerlove is offline
Quote Quick Reply
post #2110 of 2134 (permalink) Old 08-19-2019, 09:18 PM
ursamajor
Planted Member

(View User Tanks)
PTrader: (0/0%)
Join Date: Oct 2015
Posts: 154
Here's my little bowl. It's been running for a few weeks with nothing but a CFL and everything is growing like crazy. I used aquasoil and fertilize NPK, magnesium, and micros, with extra potassium since the broad-leafed plants were showing signs of deficiency. The plants are mostly aggressively invasive weeds and include Camboba, Ludwigia, Eleocharis, Anubias, and Lemna species. This bowl has been easy, cheap, and pretty fun, though in the future I would use a slightly larger container since getting my hands in there to trim is pretty tricky.
tamsin, Warpiper and Ken Keating1 like this.
Everything flows.
ursamajor is offline
Quote Quick Reply
post #2111 of 2134 (permalink) Old 08-26-2019, 02:45 AM
Hilde
Planted Tank Guru

(View User Tanks)
PTrader: (3/100%)
Join Date: Nov 2017
Location: Sacramento, CA
Posts: 918
I'd call this my no-tech tank. Standard 10 gallon tank and hood from Petco, add Anubias and Java Fern, and give minimum maintenance for six months as it's in my wife's 1st grade classroom. Can't get much easier than that. 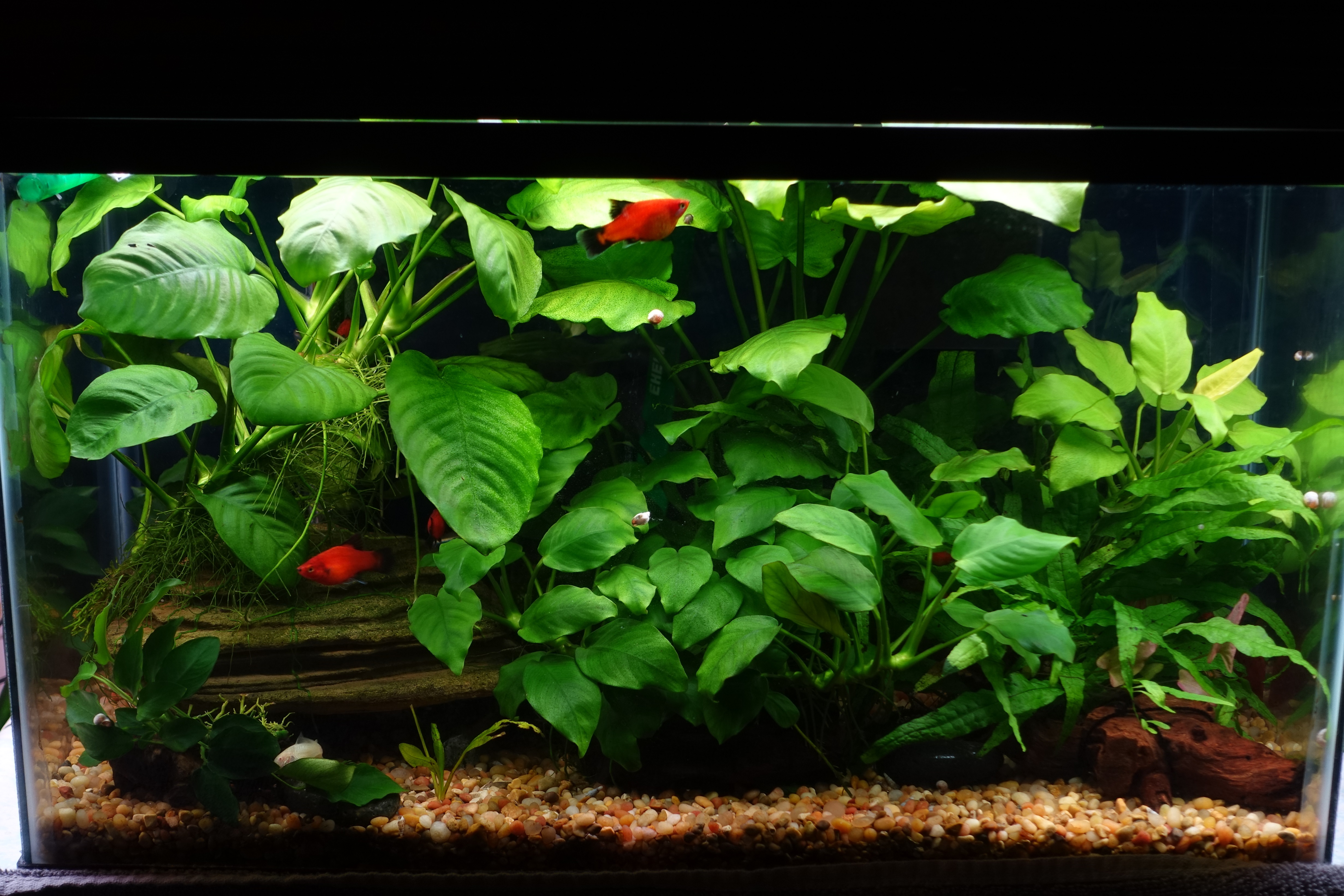 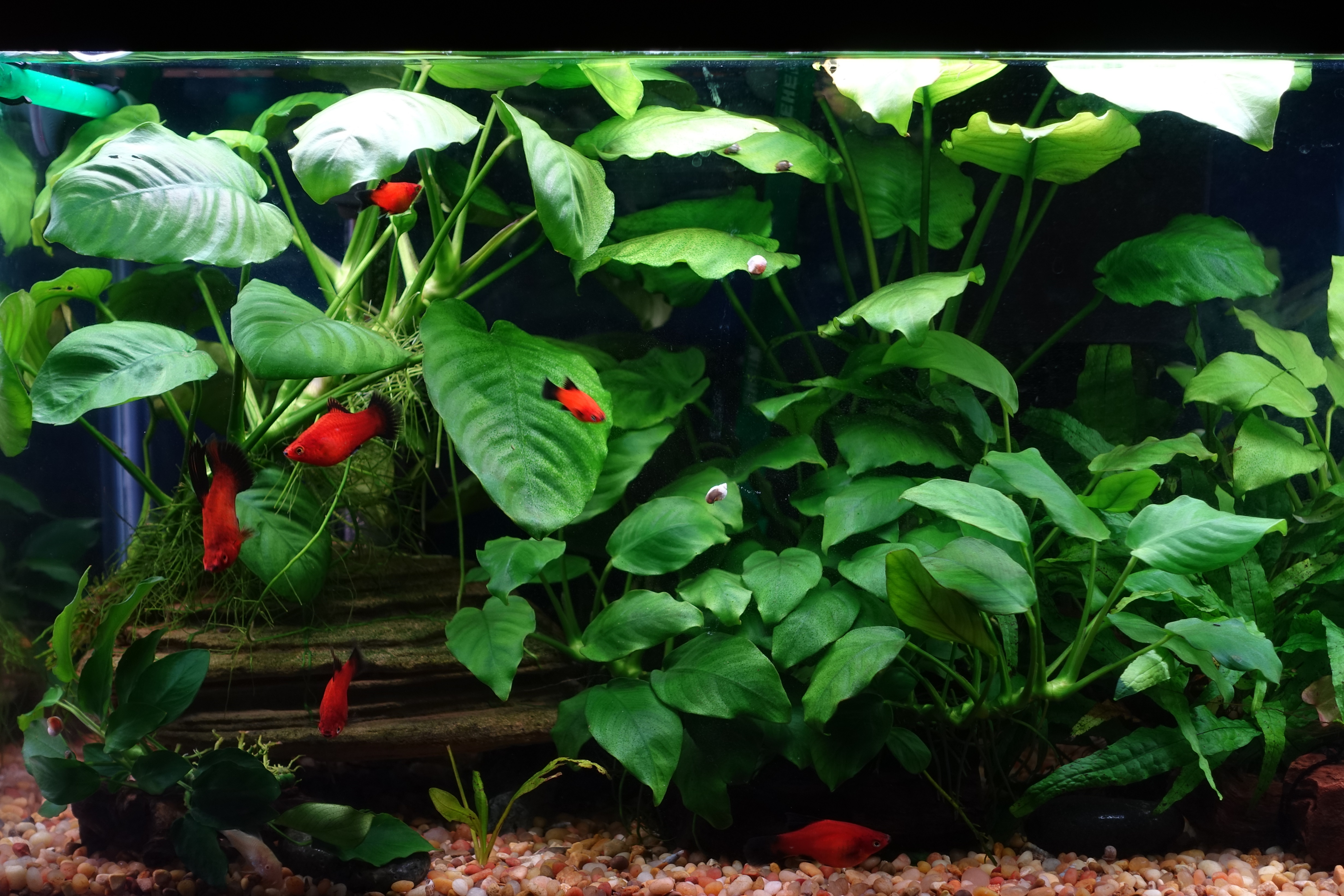 (View User Tanks)
PTrader: (0/0%)
Join Date: Apr 2019
Location: 67212
Posts: 1,691
Quote:
Originally Posted by Ken Keating1 View Post
I'd call this my no-tech tank. Standard 10 gallon tank and hood from Petco, add Anubias and Java Fern, and give minimum maintenance for six months as it's in my wife's 1st grade classroom. Can't get much easier than that.

My name is Luke. I live in South Africa and this is my lowtech planted 4 foot setup.

I am running a 20 watt 6500k floodlight and am dosing with Seachem Trace, Nitrogen and Iron supplements.

(View User Tanks)
PTrader: (0/0%)
Join Date: Apr 2019
Location: RI
Posts: 15
Quote:
Originally Posted by Hilde View Post
I amazed that the crypts are growing in the sand. How did you accomplish that? Is that pool filter sand?
I dont have any pics at the moment but im using black diamond blasting sand in my 60G and of all the stem plants ive tried the wenditti red crypt is doing the best withonly root tabs
Jrb3368 is offline
Quote Quick Reply