(View User Tanks)
PTrader: (0/0%)
Join Date: Jan 2018
Location: OHIO
Posts: 172
Chihiros RGB vivid impressions
Hello all,
I figured Id write up a post about the RGB vivid since its pretty new, And not the easiest to get in the USA... and I havent seen anyone post anything in detail about it here.

Its pretty new to me, so Take everything with a grain of salt I suppose. Also, I completely rescaped my tank approximately 5 weeks ago... so my plants are still in the process of getting established... hence the missing carpet in the middle of the pic.

First off, pretty sure the only way to get this in the USA as of now is to go through Ebay. Seems like it was directly from chihiros though, which is nice. Took about 2 weeks to get.... and as far as I can tell, its authentic.

The mounting hardware, in my opinion is garbage. I bought 2 arms and tried to set everything up, but not only is it just tedious and difficult to hang a light from a total of 2 cables.... but it sure seems to me that the light isnt balanced from its hang points, and it wanted to tilt forward on me no matter how I adjusted it. I had to place small weights in the light to get it to hang flat.... so that wasnt happening. I built a wood stand for it and mounted it to my aquarium stand.

The app is called my chihiros and its usable. Not the best, but it works. Its a little temperamental and likes to disconnect while Im trying to edit schedules. Also, as far as I can tell, each minute is its own set point, And selecting any particular minute is not easy since the entire 24 hours day is laid out on your 2 wide phone screen. When youre trying to select a time, it doesnt lock into place at like every hour or half hour, so you spend an absurd amount of time trying to select exactly 0800hrs. You think you got it, but the minuscule movement your finger makes when removing it from the screen.... moves the time by several minutes.... this all makes programming hard. Say you want a ramp from 8-9.... first you gotta spend 5 min to try and get lucky and land on exactly 0800. Then you set all channels to 0. Then you spend 5 min trying to get lucky and select exactly 0900. Then you put in your desired light intensity for your 0900 time. Ok you changed your mind and want it more yellow at 0900... well spend 5 min again trying to get lucky to land on exactly 0900 and readjust it. If you think eh 0858 is close enough and you just put your adjustment in at that time.... well now you have a 2 minute peak or valley between 0858 and 0900. Hope this makes enough sense that you get what Im saying.

Another really strange thing is that it has a status light to indicate that its connected to your phone. When its connected the light is solid... any other time youre not standing next to it and using the app... the light blinks. Its a white LED thats on the tank side of the light and it blinks white light once every second directly at your tank pretty much all the time... no big deal in the day... but when the main lights are out its just over there obviously blinking. I will be taking it apart and getting rid of it.

The fans are not silent, but not obnoxious to me. Similar to My other lights in the past.

On to the main aspect... the light itself and how it makes your tank look. Vivid is the correct word. You actually need to really spend time tweaking it to get it to NOT be so saturated that its more or less just artificial looking. Its almost like there are UV lights in there that they didnt disclose and theyre making your plants light up like crazy. Pinks and reds can be borderline fluorescent. My DHG Belem is a nice lush darker green, and my MC lights up bright green. With the right settings.... it looks really impressive, and Ill be using it for the time being because it looks so vivid.

Ok Ill try and post some pics now... just keep in mind Im still adjusting the spectrum. Its a multi day process of trial and error. But in general I have it set to a low intensity, yellow/gold warm sunrise, a high intensity white/blue mid day and a low intensity cooler heavy blue dusk type setting. No particular reason other than I like them.

I did not edit the photos, other than to crop. Taken on an iPhone XR . Sorry about the glare Im not a good photographer.

Here is the AM - This comes across just slightly more intense in the photo than it does in real life... but its accurate enough enough post so you can get the idea. 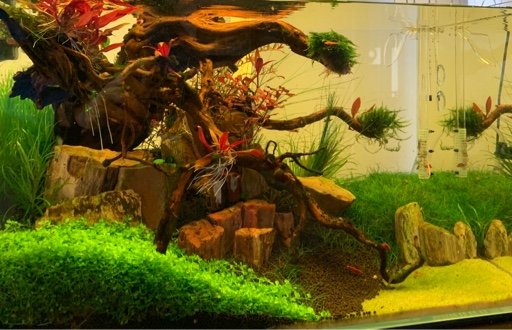 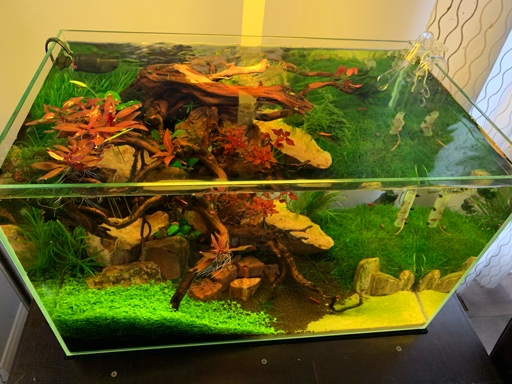 Heres mid day.... my walls are actually a light blue which is heavily effected by the light, making it appear purple. 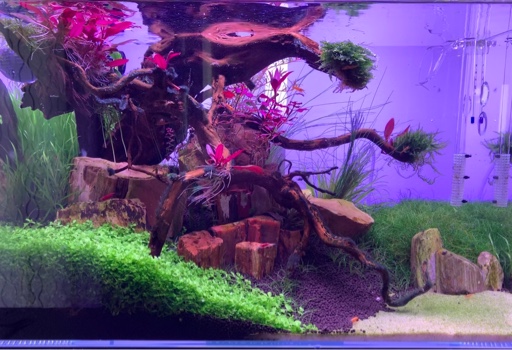 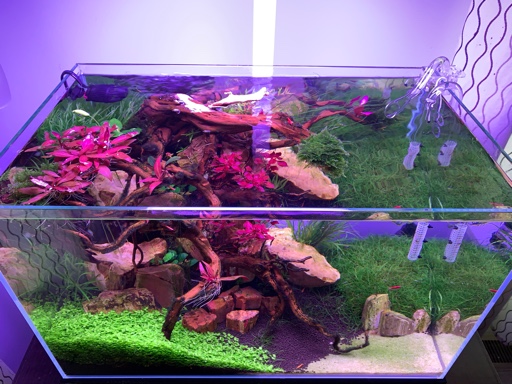 Here is the lower intensity evening setting... its just slightly more blue but much less intense than the day setting 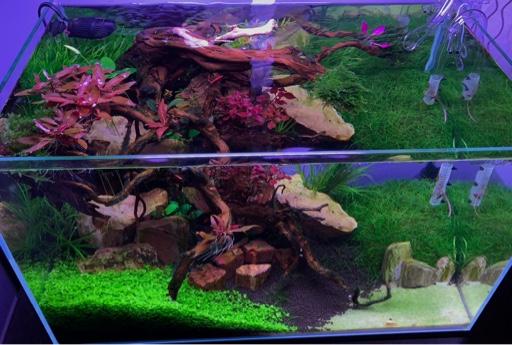 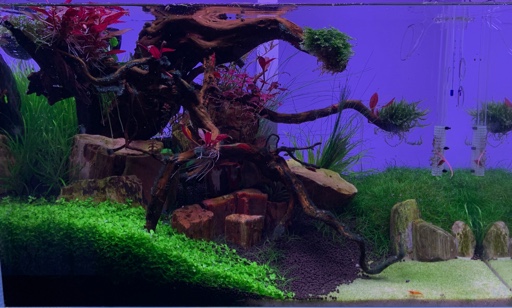 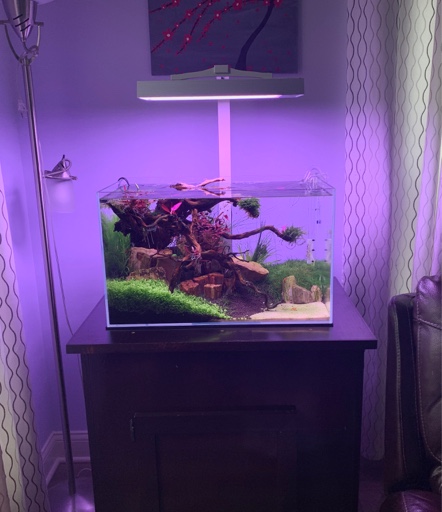 
(View User Tanks)
PTrader: (0/0%)
Join Date: Nov 2019
Posts: 1
Beautiful tank you got there. If you don't mind me asking what light stand is that ? Is chihiros vivid worth it in your opinion?


(View User Tanks)
PTrader: (0/0%)
Join Date: Jan 2018
Location: OHIO
Posts: 172
Chihiros RGB vivid impressions
Quote:
Originally Posted by Zupreme View Post
Beautiful tank you got there. If you don't mind me asking what light stand is that ? Is chihiros vivid worth it in your opinion?

thanks
Thanks!
The light stand I built myself and attached it to the light via small bolts through the lights fan covers.

Yeah Id say the light is worth it. I like it a lot.