A bit buggy at first but seems to be working well now.

The app isn't the most intuitive out there; no user guide and/or tips on how to set various LED values, schedules, or timers but you get most of it eventually after tinkering around. The app also has issues with connecting to the light. I'll do a full write up on the light a bit later as I learn and understand it better.

I've read up on PAR values here on the forum and was wondering on how you guys would setup the spectrum for this light for a planted tank?

Attached is a screenshot of the various LED settings within the app.

From what I understand, plants don't absorb light / photosynthesize in certain wavelengths and prefer the blue / red ends of the spectrum.

So it appears to me that a combination of 1) red / blue light (for optimal photosynthesis) and 2) a touch of green / white light for purely aesthetic reasons is the best recipe.


(View User Tanks)
PTrader: (0/0%)
Join Date: Jul 2016
Location: Central PA
Posts: 15
Following. I just received my AI Prime Freshwater. The app is problematic but once I switched to using a laptop it was a lot easier. The amount of control you have over the lights and timing is incredible. It amazes me that more electronics don't have this type of controls (AC, lights, etc etc...)
Unfortunately the stand did not arrive with the light so, I'm waiting on that. I'm interested in any advice on settings for this. I already programmed the timer to gradually come on for 4 hours/ off for 2 hours/ and on again for 4. I skipped any moonlight, but I might add it in for an hour later once I figure out the setting more.

Back to the app... I accidentally clicked the wrong network name and the app refused to stop searching for the wrong network. I quit the app, turned off my phone for several minutes, then deleted the app. When I selected my light again after reinstalling the app went right back to searching for a neighbors network. That is when I switched to the laptop. I did contact support and they answered with a suggested solution the next day. I have not followed the advice yet but will try this weekend.

If anyone is interested, I'm using this over an eight gallon aquarium.
(yes, it's overkill but this light had all the features I wanted in a light)
(yes, I heard about this on the King of DIY videos)
Breaking_betta is offline
Quote Quick Reply
post #4 of 68 (permalink) Old 11-25-2017, 01:43 AM
jeffkrol
Planted Tank Guru

Prefer cyan for moonlight so a bit of blue/green if you want it..

(View User Tanks)
PTrader: (0/0%)
Join Date: Nov 2017
Posts: 2
Thanks for sharing the article!! I have two Prime HD (older non-plant) over a 50g high tech tank. I was struggling with algae, and it seems like I have a new option to try.

In the article this helped me with my lighting logic below: So, here is my new lighting plan:

1. UV LED is likely 340um. So that would have been feeding nothing but both phyco's -> turning that off totally.
2. Violet LED is likely 420um. So that will start feeding both chlorophyll. So I will leave it on at 70%.
3. Royal Blue LED is likely be 450um, which would be peak absorption wavelength for chlorophyll. Push this to 100%.
4. Blue LED is likely be around 475-480um. This only helps Carotene. Turning it off.
5. Green LED 570um. OFF!!
6. Deep Red LED 660um. Good for both chlorophylls. 100%.
7. Cool white LED. This has a wide range spectrum (obviously), and includes wuite a hump of green range. Turning it off and rely on the above targeted LEDs.

(Above LED spectrums weren't from AI, as I couldn't find any info. But AFAIK, most LEDs share the same spectrum due to semiconductor chemistry. So they should be right) 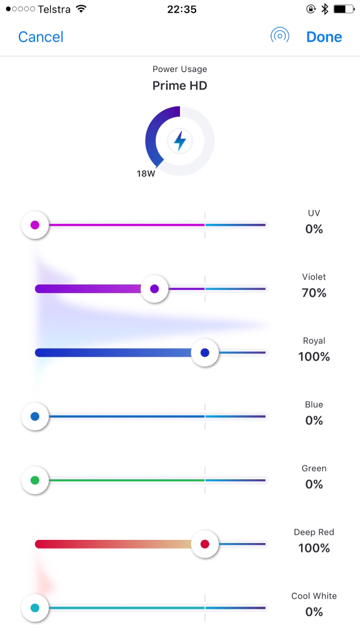 I will give this a go for a while and report back.


Sent from my iPhone using Tapatalk

Oh BTW, it looks terrible. But I will test it. 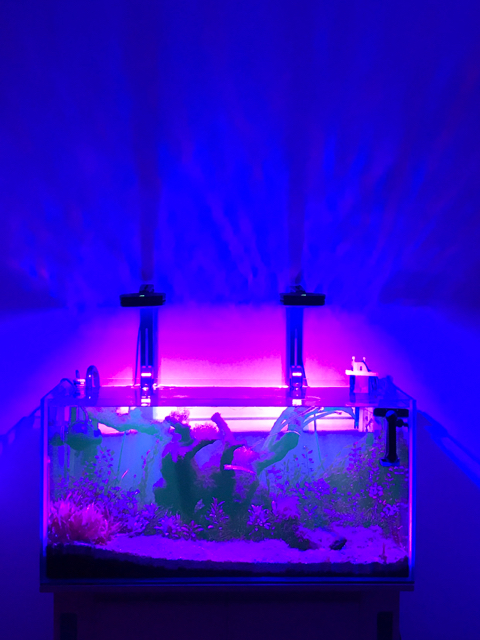 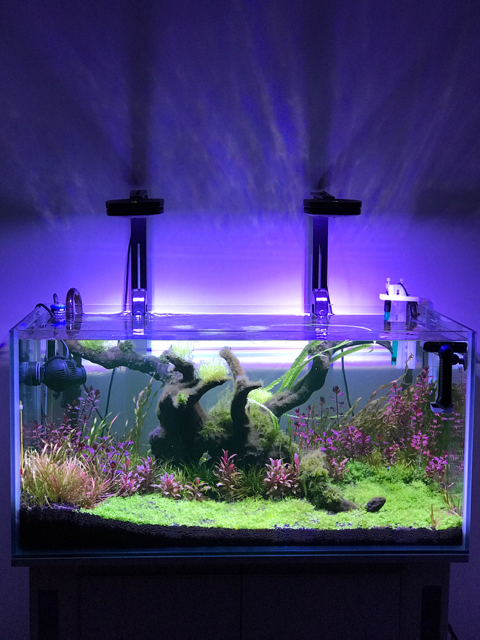 
(View User Tanks)
PTrader: (0/0%)
Join Date: Jul 2016
Location: Central PA
Posts: 15
I think the capabilities of the light, app, wifi connection control and overall controls are incredible. I was willing to pay a lot for the light to simplify my lighting setup on this aquarium. I have it set and let it go through its cycle now. I still need to get the color and amount of light where it needs to be but I'm getting closer.

I will say I finally got the stand (bracket version) and I think it sucks. The mounting clamp is huge and I personally think it's ridiculous that there are no rubber grips to prevent scratching the aquarium. My tank is frameless and this bar would easily scratch glass. I decided to clamp the light stand on a board between the wall and the aquarium stand until I come up with a better setup.
Breaking_betta is offline
Quote Quick Reply
post #8 of 68 (permalink) Old 11-28-2017, 09:35 AM
Bfishy
Algae Grower


(View User Tanks)
PTrader: (0/0%)
Join Date: Oct 2015
Posts: 3
I have two of these. I like using the app and the ability to change colors but the warm white LEDs on this light is way too much for me. I always hear many planted tank people say they like the warmer white in 6700k areas but I cant stand the look. With the AI prime FW it seems to be so yellow and washed out that you cant hardly even see into the tank. Its so washed out and no definition. Makes the water look dirty. When I run just the cool white Led's then its nice and clear and everything pops including the fish if I keep the blue and red turned up too. With just the cool whites running I can see all the different shades of green in the plants. With the warm whites also running then all I see is piss yellow everything. Its like I planted everything into a giant beer.

I run both warm and cool whites at 100% during the day while I'm at work so that the plants can have more light but then I have the warms slowly come down in late afternoon and eventually 0 by around 7pm when I am usually around looking at it.

I run one on each end of a 180 gallon and two finnex stingrays in the middle over a large wood piece heavily planted with lower light Anubias. High light plants on the end thirds and the middle 3rd is low light plants is what I am trying to say. Running Co2 with a Rex Grigg 4"x3ft reactor. Way too many bps to count, basically right between still seeing bubbles and not a solid stream. I blame it on my overflow and wet/dry set up.

trying to get photos on this site is a pain. I have moved things around since I posted this and wanted to post another picture but I see photobucket doesnt 3rd party host anymore and my original picture was pulled.


(View User Tanks)
PTrader: (0/0%)
Join Date: Jul 2016
Location: Central PA
Posts: 15
My plant grouping/placement is weak but it is a work in progress. Im slowly taking out hairgrass and trying to decide what to put in the back left corner. Low tech at the moment but it is the day GLA brought back their paintball GRO regulator so that may change soon.
bveister, bveister, smurfz and 3 others like this.
Breaking_betta is offline
Quote Quick Reply
post #12 of 68 (permalink) Old 12-02-2017, 07:54 PM
smurfz
Newbie

(View User Tanks)
PTrader: (0/0%)
Join Date: Nov 2017
Posts: 2
Reporting back with the blue/red experiment on the effect of algae.
Algae grew better than my previous lighting plan.
I'm expecting this was the case because the intensity of the blue and reds were significantly greater than what I had before (all LEDs at 50%). Other plants grew well too.

Now the next natural step would be to just lower the brightness of the blue/red LEDs, but the look of the tank is so bad. So I've decided to introduce white and green LED a bit too.

The following is what I'm going to test for next week: 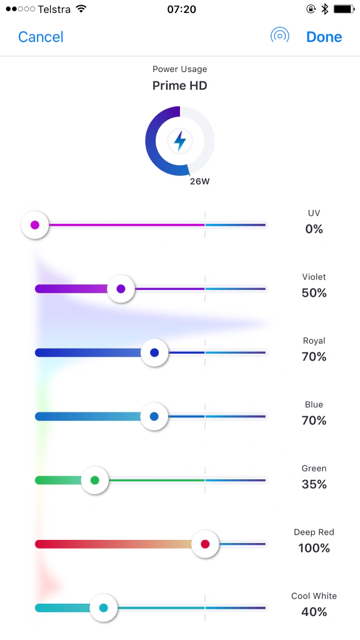 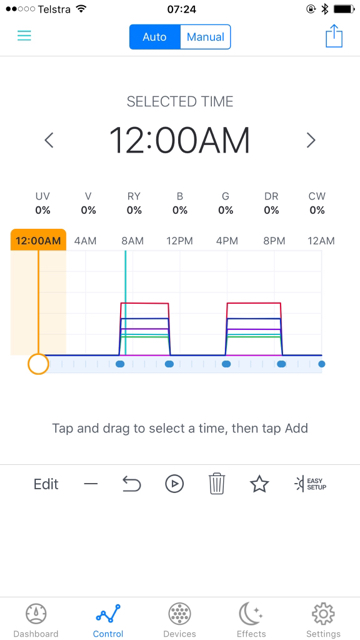 The look of the tank is as follows: (top is all LEDs on and bottom is the new plan) 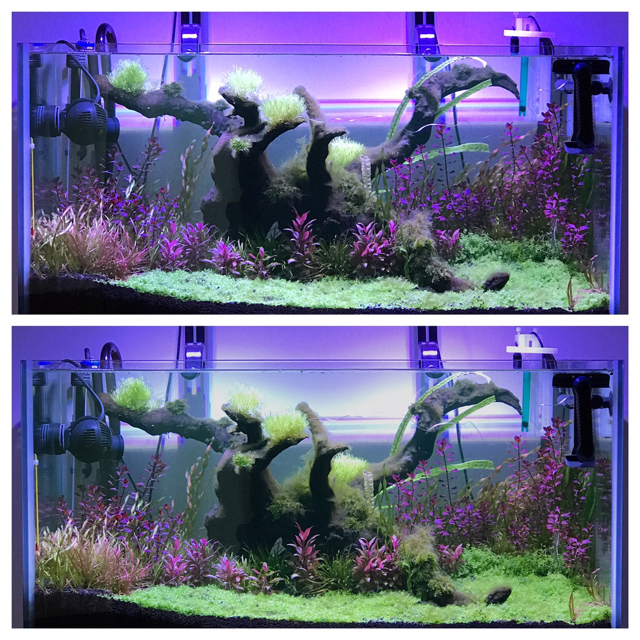 Sent from my iPhone using Tapatalk
Barleysoda and Barleysoda like this.
smurfz is offline
Quote Quick Reply
post #13 of 68 (permalink) Old 12-03-2017, 03:14 AM
Spiffyfish
Algae Grower

(View User Tanks)
PTrader: (3/100%)
Join Date: Jan 2014
Location: BayArea,CA
Posts: 94
Quote:
Originally Posted by Breaking_betta View Post
My plant grouping/placement is weak but it is a work in progress. Im slowly taking out hairgrass and trying to decide what to put in the back left corner. Low tech at the moment but it is the day GLA brought back their paintball GRO regulator so that may change soon.
What are your settings with the light in these pictures? it is not at full intensity correct?
Chris
Spiffyfish is offline
Quote Quick Reply
post #14 of 68 (permalink) Old 12-04-2017, 01:46 AM
Breaking_betta
Algae Grower


(View User Tanks)
PTrader: (0/0%)
Join Date: Jul 2016
Location: Central PA
Posts: 15
Quote:
Originally Posted by Spiffyfish View Post
What are your settings with the light in these pictures? it is not at full intensity correct?
I'll take a screen capture when I have time. I have the intensity at about 50%. It's only an low tech 8 gallon so I'm monitoring algae and plant growth closely before changing the intensity.
Breaking_betta is offline
Quote Quick Reply
post #15 of 68 (permalink) Old 12-04-2017, 03:36 AM
Spiffyfish
Algae Grower