(View User Tanks)
PTrader: (2/100%)
Join Date: Jan 2015
Location: Pittsburgh, PA
Posts: 7
My nightmare with 30W LED Floodlight from China
Inspired by this YouTube video and my love for HC, this is my attempt to mod my 24G Nano Cube 36W light to the 30W LED light:

This is my tank with the original dual 36W halogen lights: 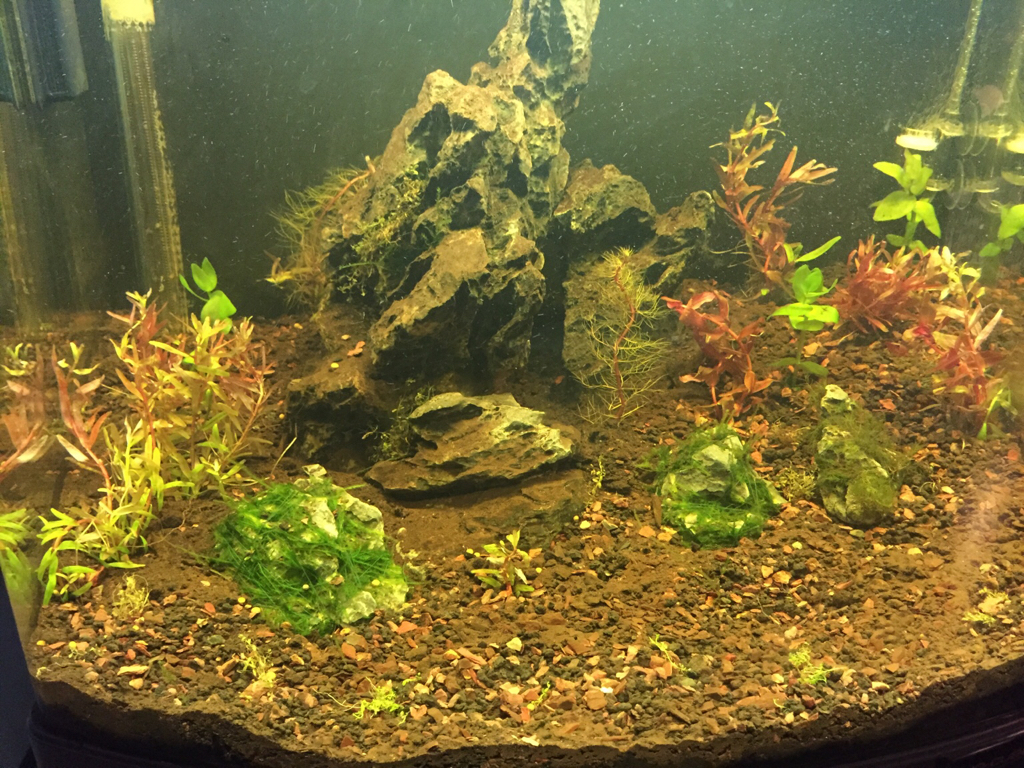 And so, the nightmare begins: 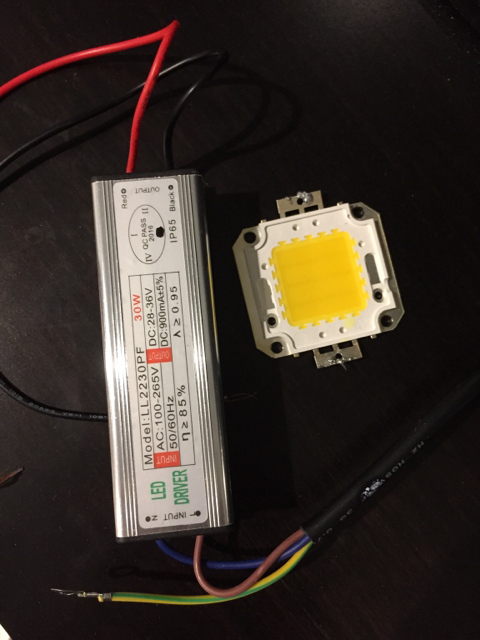 Being an engineer, I tested the pair (led + driver) before attempted to install it.

I begin to take out the original light assembly and install the light and driver: 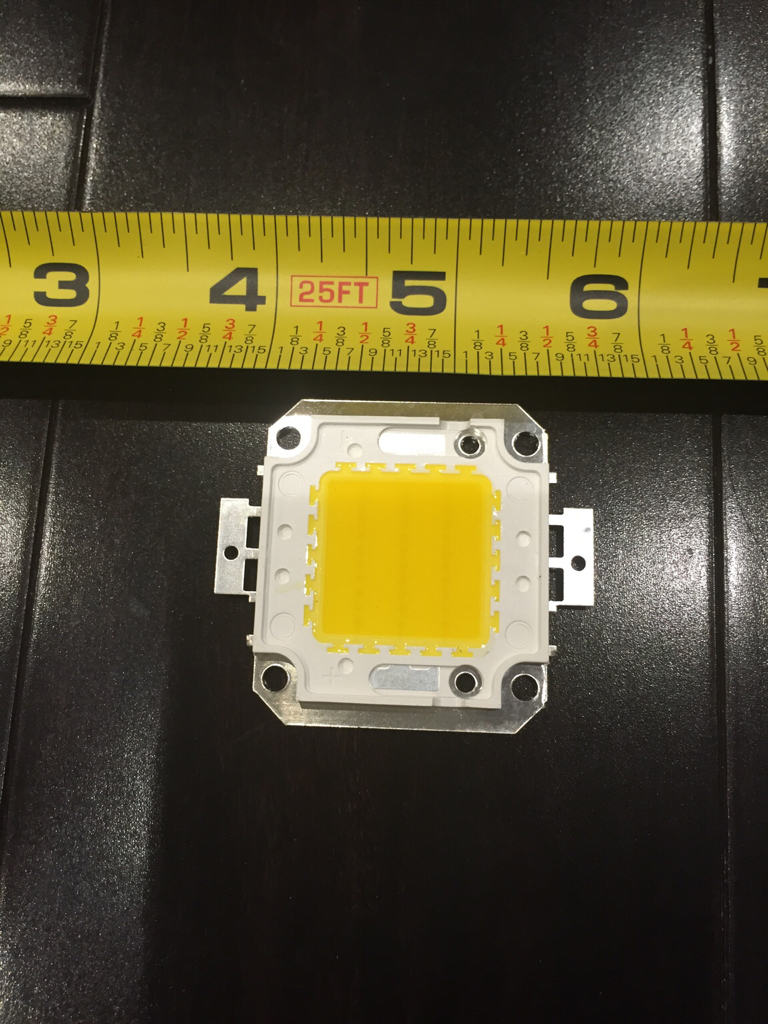 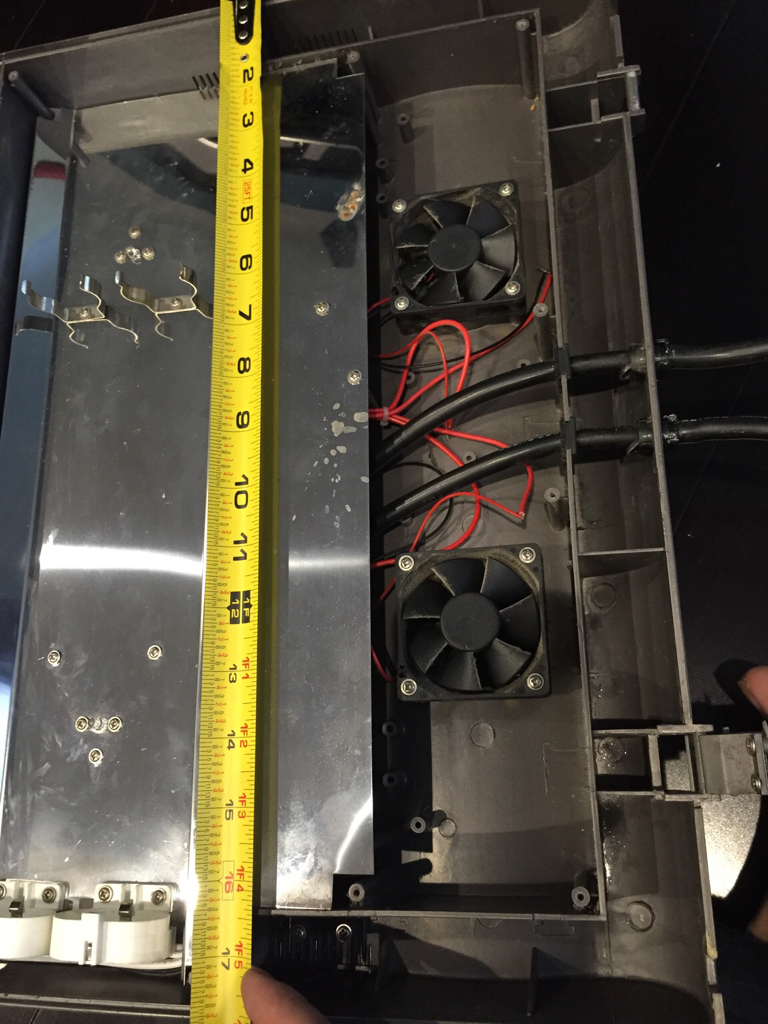 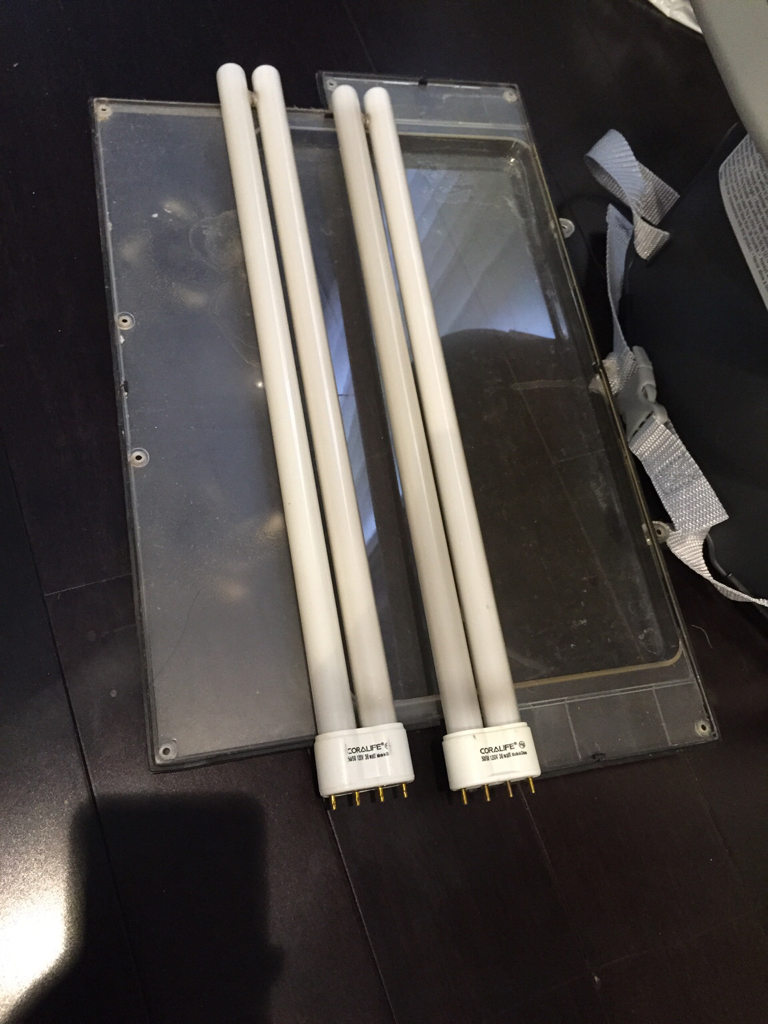 Once I'm finished, this is what the light looks like: 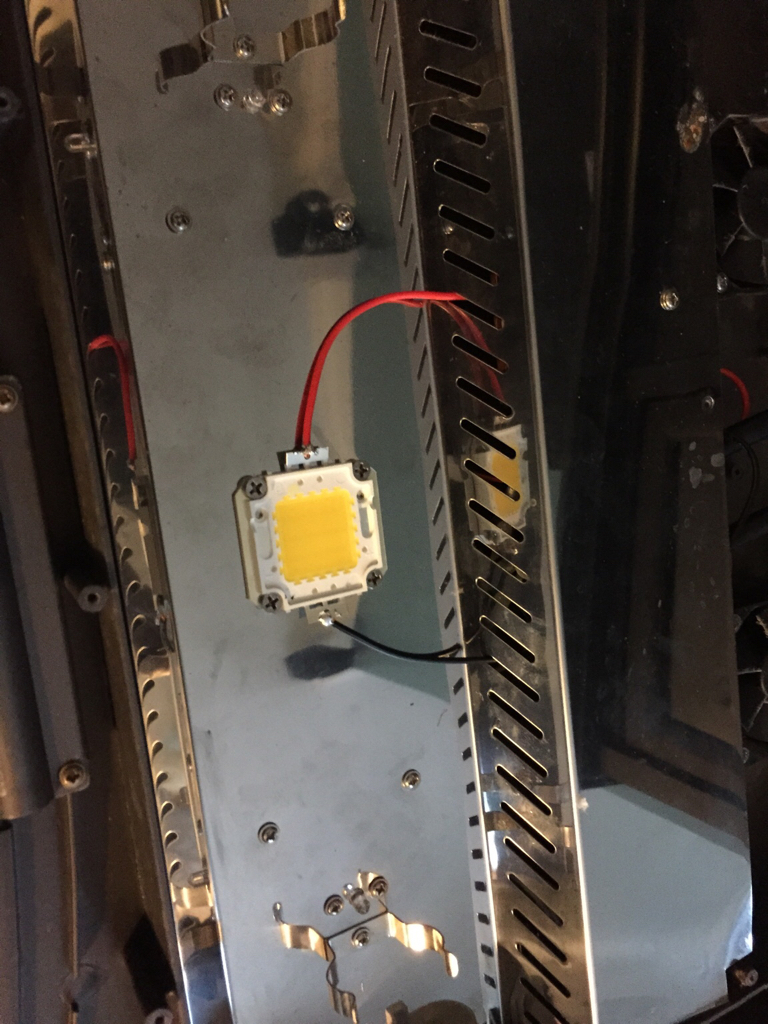 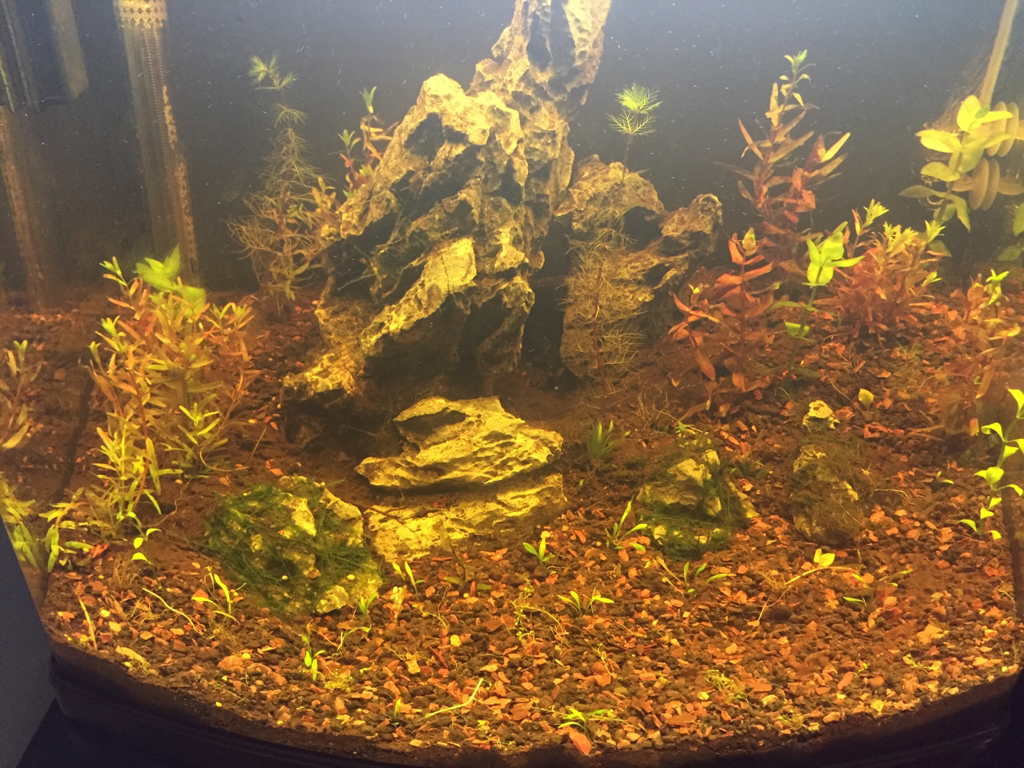 Issue #1: About 5 mins after the light was on, it starts blinking. It seems there are 3 rows in the 1 LED and they dislike each other. The frequency of the blinks are also asynchronous.

My coworker said I might need a heat sink in combination with the 2 original fans to cool it.

So this is the Solution #1: 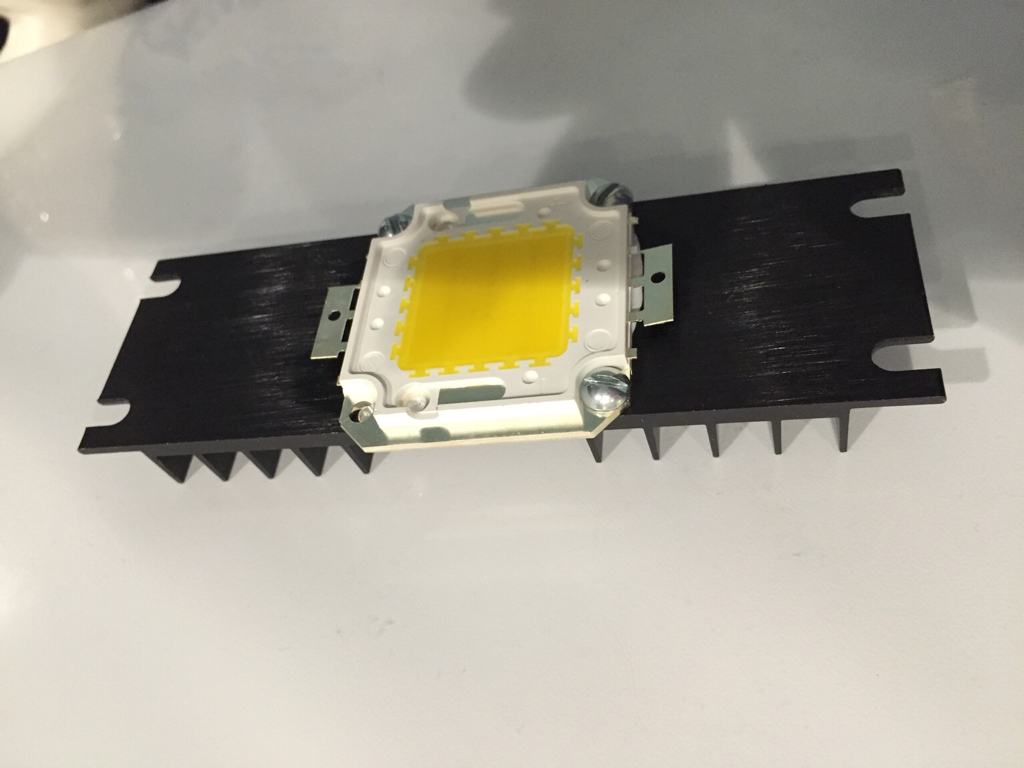 Installed it onto the light assembly.

Result = Failed (LED does not stay ON; it blinks)

Issue #2: With all (3) pairs and trying different combinations of LED and driver. Although some pair stay ON longer than other, but they're all blinking!

Issue #3: Since there is no good LED to use as a base, I cannot tell whether the drivers are bad or the LEDs are bad.

I order another "high quality" 30W LED from China for $7.57 this one said it's Full Spectrum! 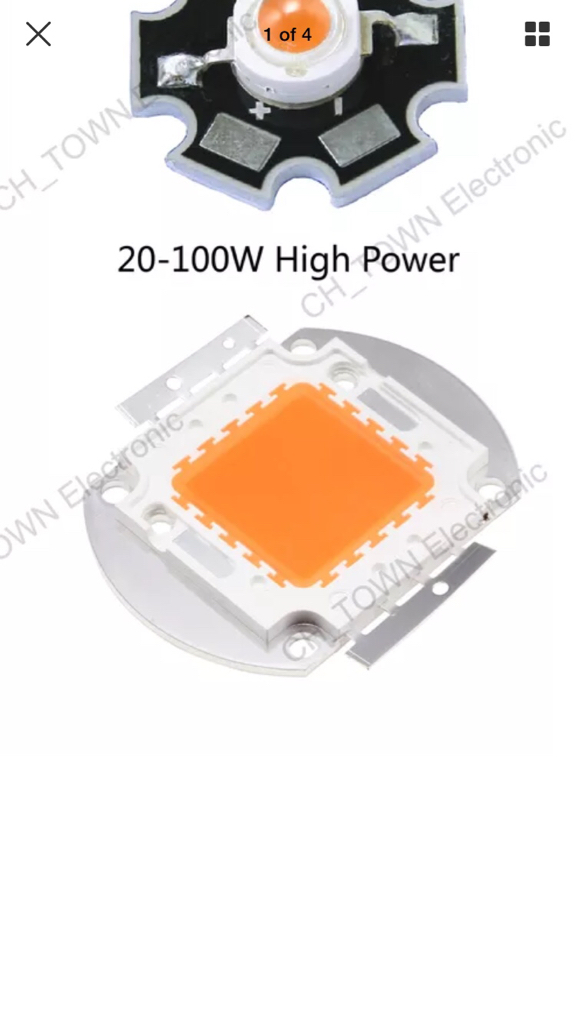 The Good News: It does NOT blink! So the drivers are good.

The Bad News: It made my tank looks like it's from Mars. 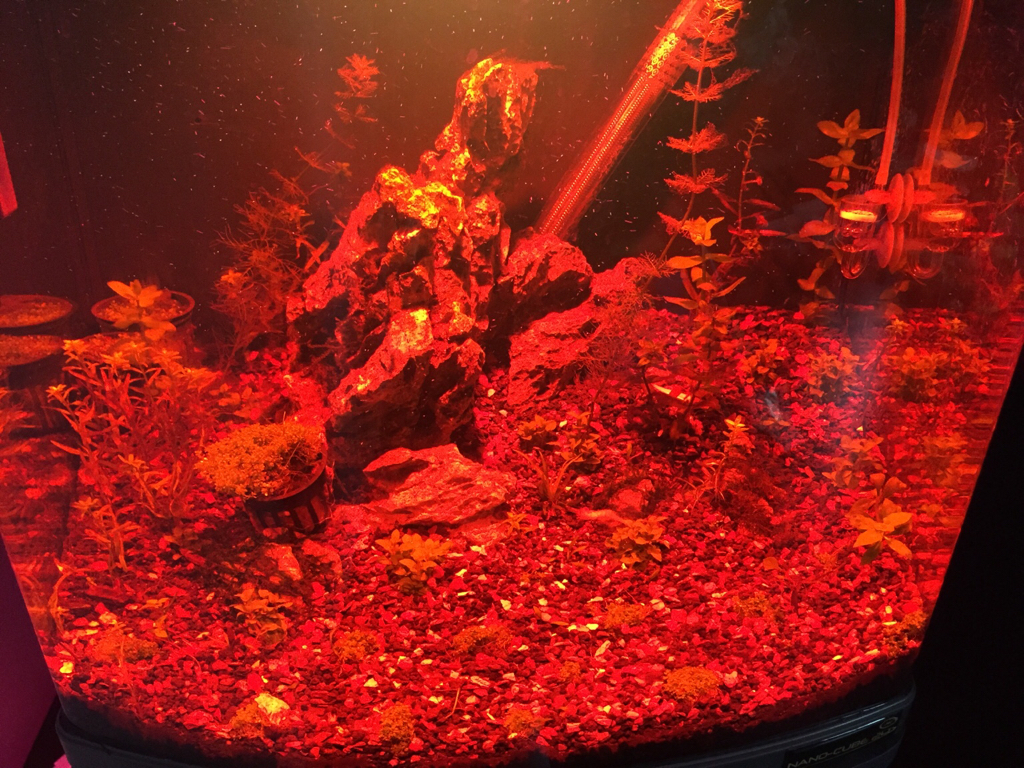 It's probably cool if you're Sci Fi geek, I'm not one of them! The color even piss off the wife!

Finally, after about $30 bucks in and no light for my HC. Oh, did I mention each order from China take 3 weeks to 1 month to arrived? I had enough of all the Chinese crappy stuffs.

I decided to spend the money and buy the real stuffs from Amazon for $34.99. 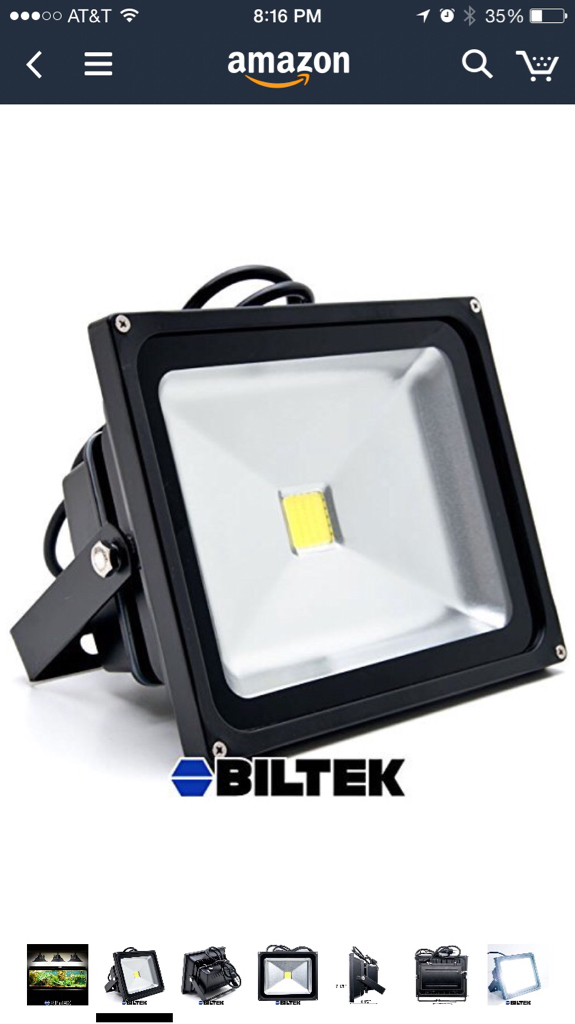 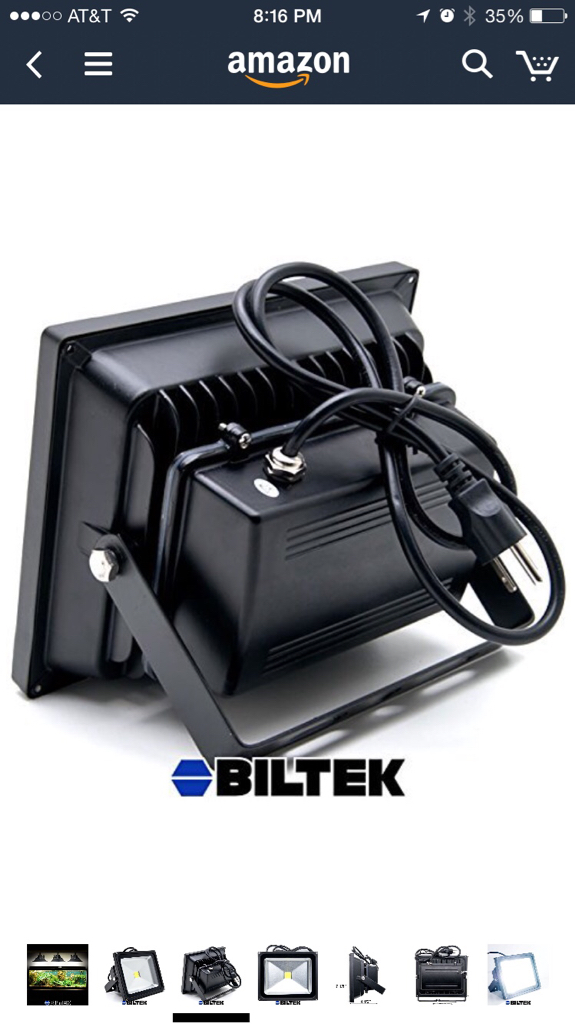 Once it arrived, I removed the flood light assembly, exposed the LED. Luckily, the LED itself was the same size as the China ones so it was a perfect fit for my light assembly.

This is the back LED bulb of the good Biltek 30W LED 6500K in the YouTube video. I was unable to find where to order more of the LED bulb, if you guys find out, please let me know where to order it. 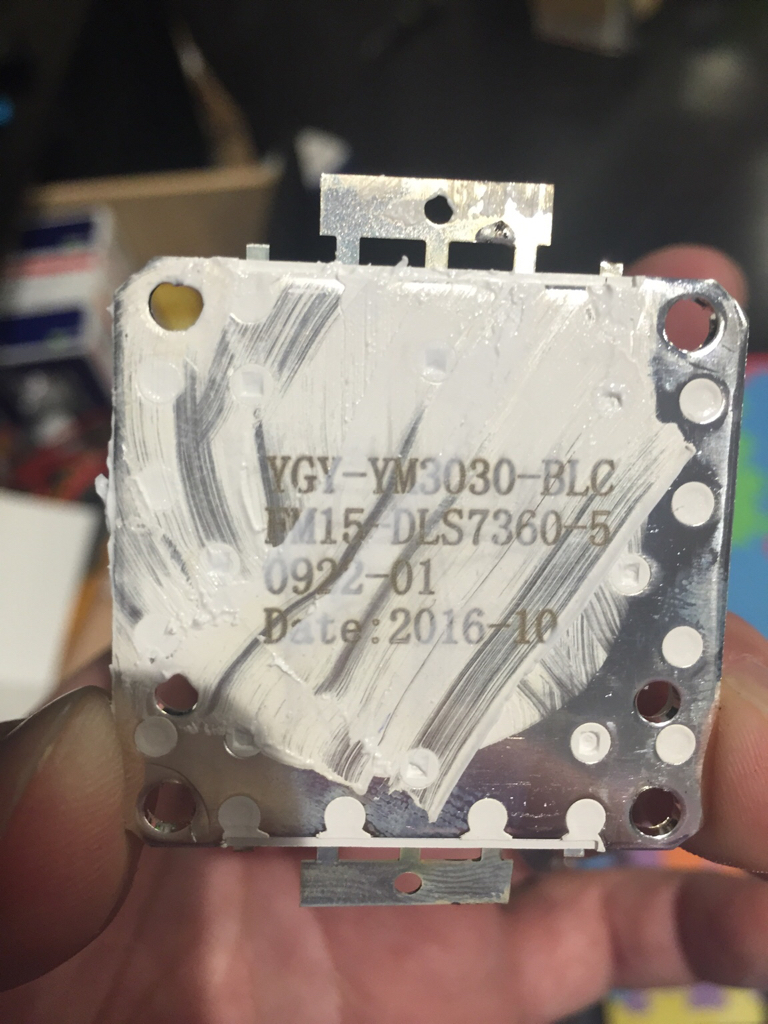 This is what my tank looks now, the above LED works very well with the China 30W driver. It was just the LEDs after all. 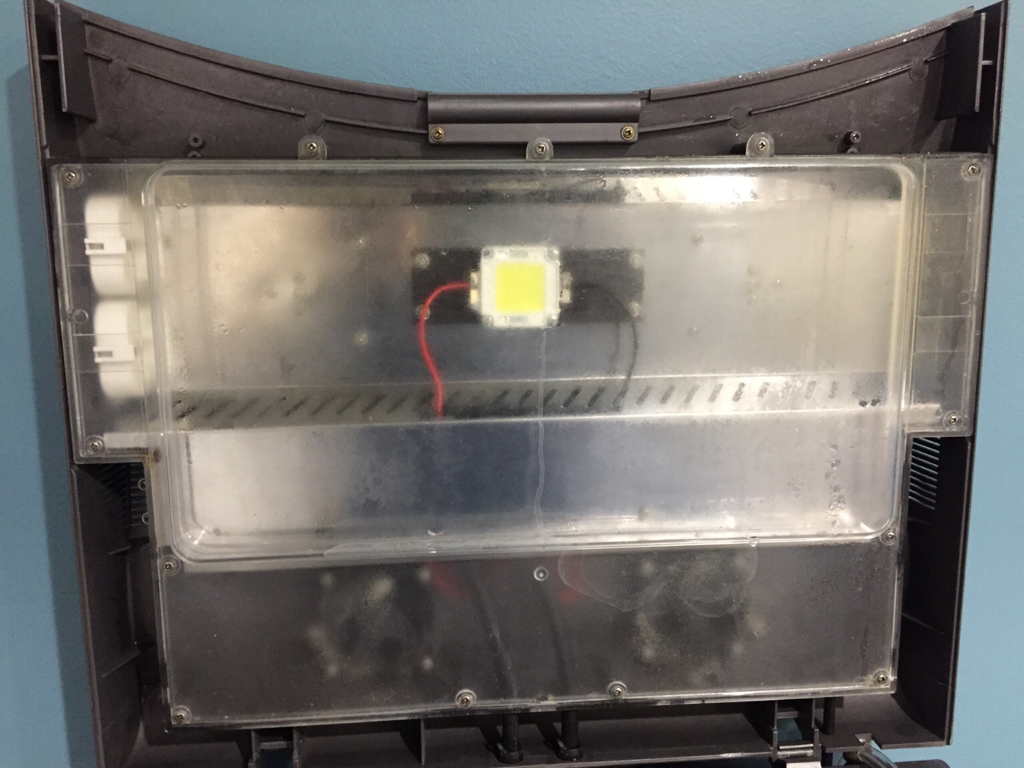 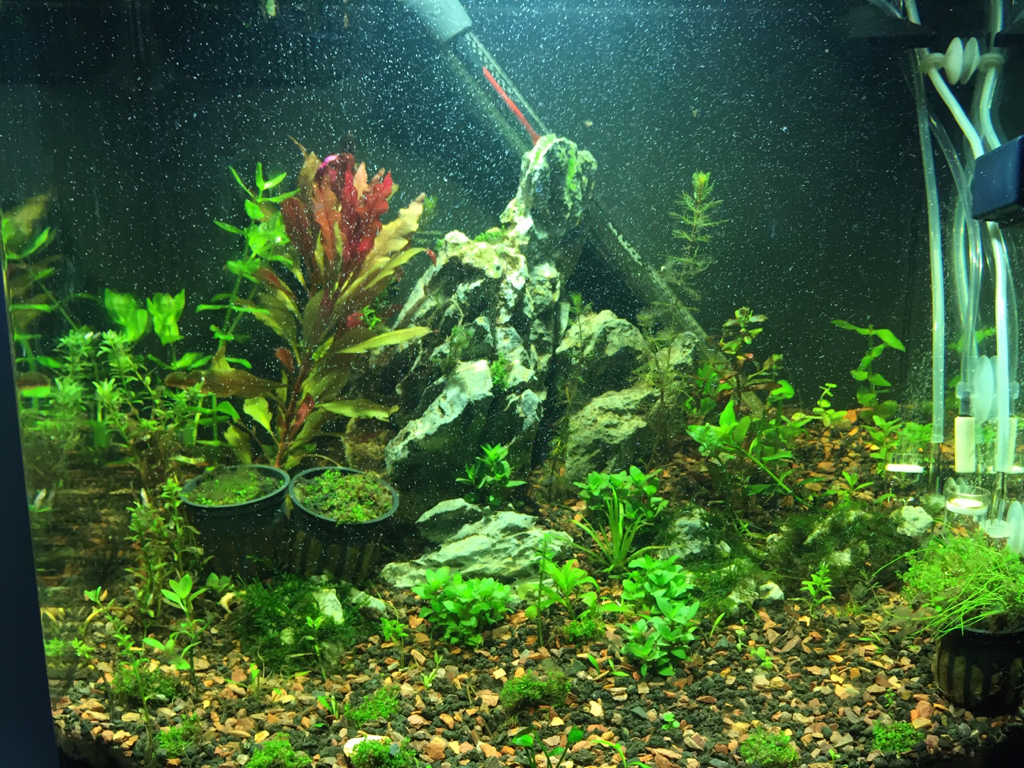 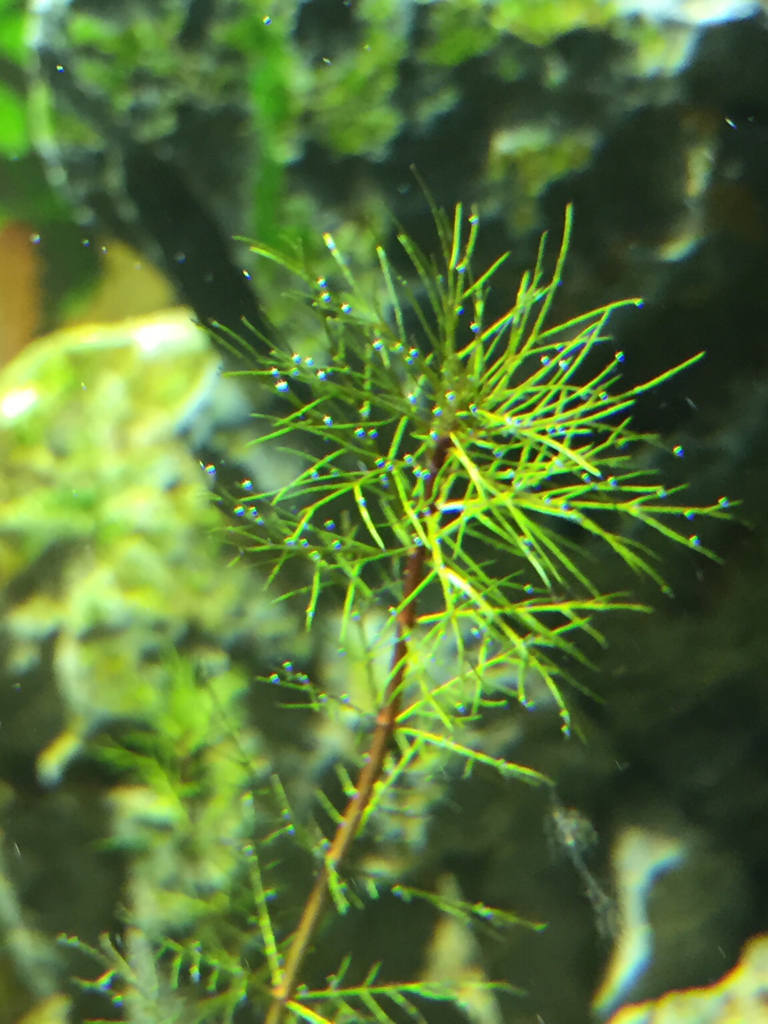 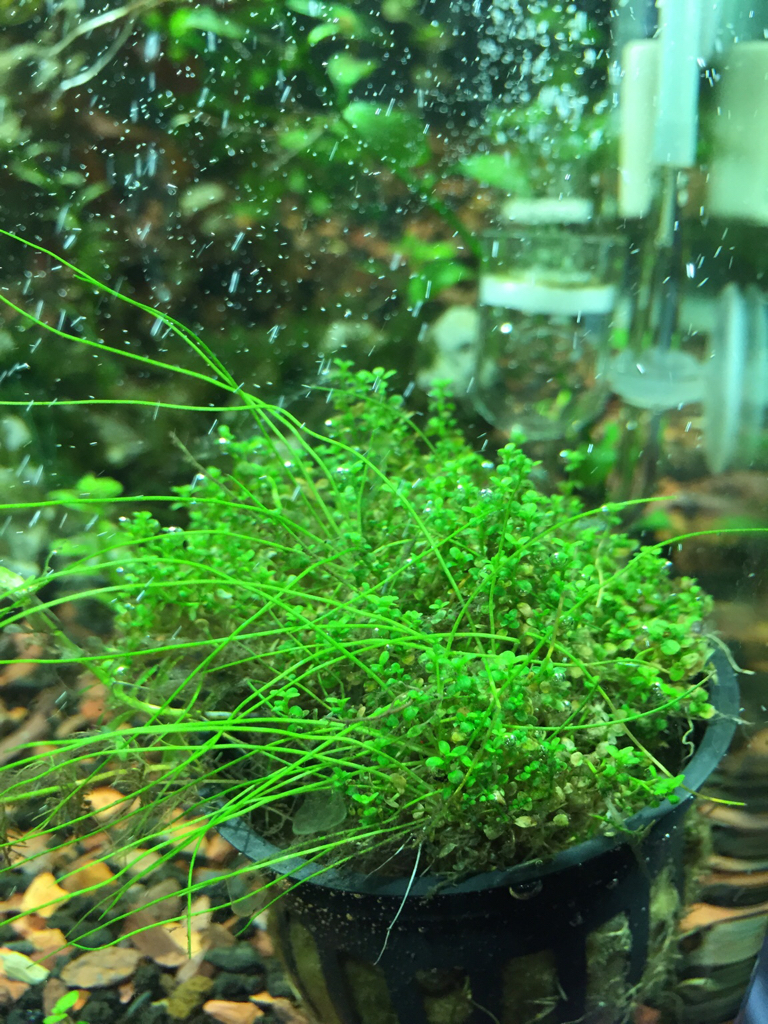 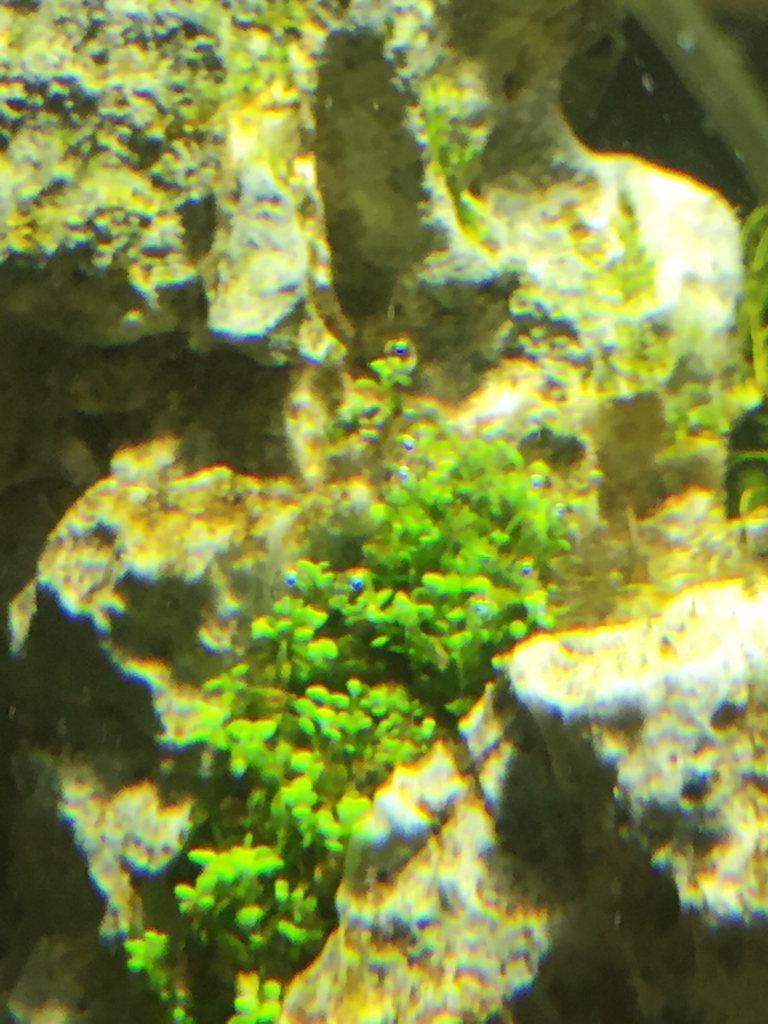 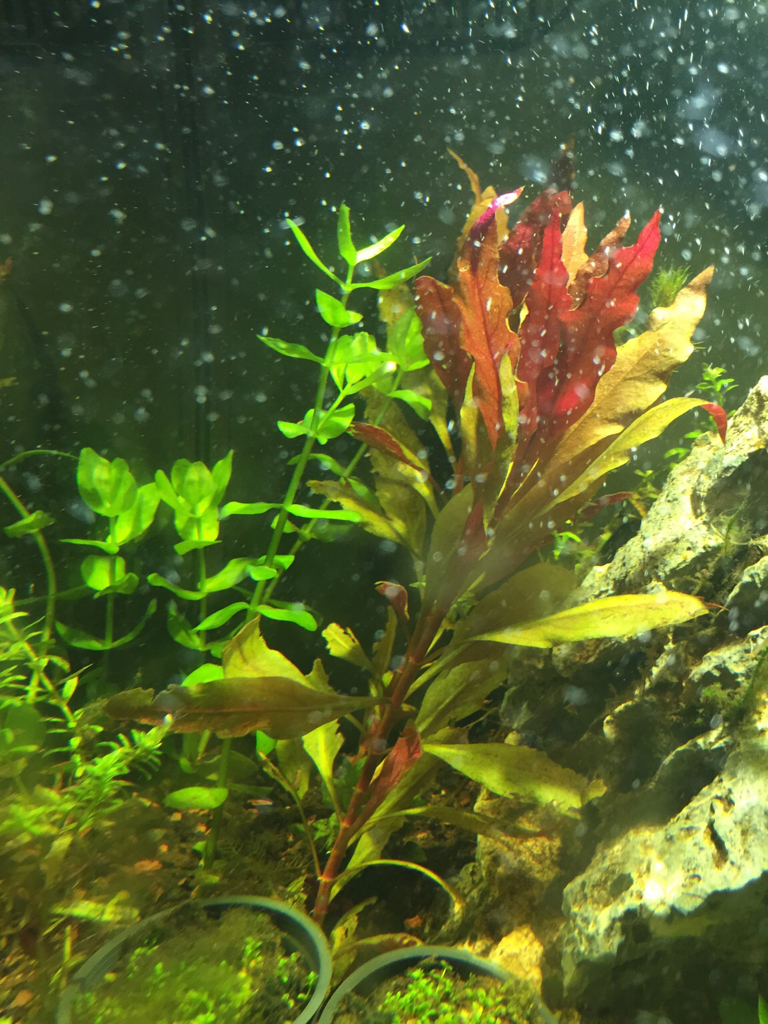 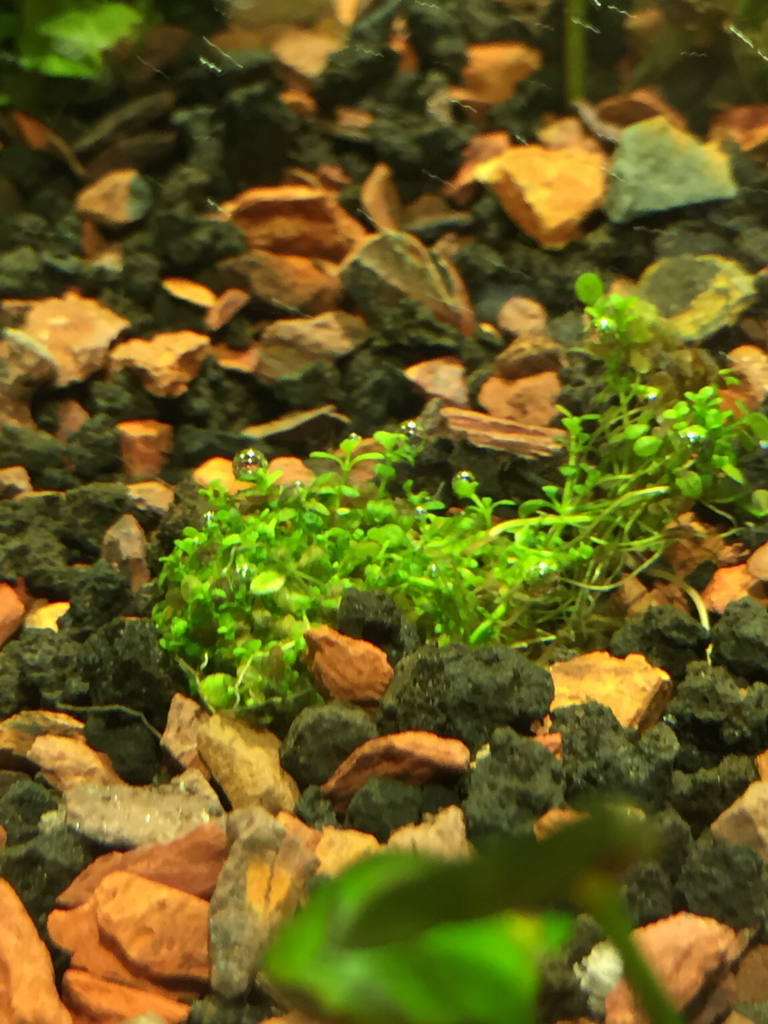 Tip #3: During test, leave the LED plug in for hours to make sure it doesn't start blinking.


To view links or images in signatures your post count must be 10 or greater. You currently have 0 posts.
klibs is offline
Quote Quick Reply
post #4 of 7 (permalink) Old 02-04-2017, 06:23 AM
jeffkrol
Planted Tank Guru

chips could be bad...or not.
For fun you could see if the chip lights w/ a 24V wall wart.. briefly if bright..
Could be a smaller chip.. Would need row/column count for a better guess..

Point is there are other reasons inc. accidental shorts to sink (not likely in your case)..

As to "full spectrum" hate their use of it for those magenta chips..
"A man with a watch knows what time it is. A man with two watches is never sure"
jeffkrol is offline
Quote Quick Reply
post #5 of 7 (permalink) Old 02-04-2017, 06:29 AM
BettaBettas
Banned

(View User Tanks)
PTrader: (0/0%)
Join Date: Jan 2016
Location: Poland
Posts: 745
The problem with China leds was mostly letting them run even for a short time without real heatsink! They need really strong cooling with such a power. Well, now it's too late for them.
To view links or images in signatures your post count must be 10 or greater. You currently have 0 posts.
- 120x48x60 cm

(View User Tanks)
PTrader: (2/100%)
Join Date: Jul 2010
Location: United States
Posts: 12,355
To me, the major issue is that there is a total mismatch between the equipment and the use. There are certainly faults, at times, with the equipment we buy. We see it all the time but there is also often a mismatch between what the equipment is designed to do and the way we use it.
I see this as an example of trying to use LED lighting without a full understanding of what we have bought.
Nothing alarming nor critical here as long as we learn from it. LED are still somewhat new and there is often a lack of understanding. In this case, that may show in some of the experience. Using LED without knowing about heat sinks is like thinking we can drive because we can start the engine. Nobody got killed, it just cost $30 for a lesson but we need to know what that lesson should be.
Lack of knowledge costs money and we should learn first and buy second? Sorry but I don't see the Chinese product as the weak point.
nel and nel like this.
PlantedRich is offline
Quote Quick Reply